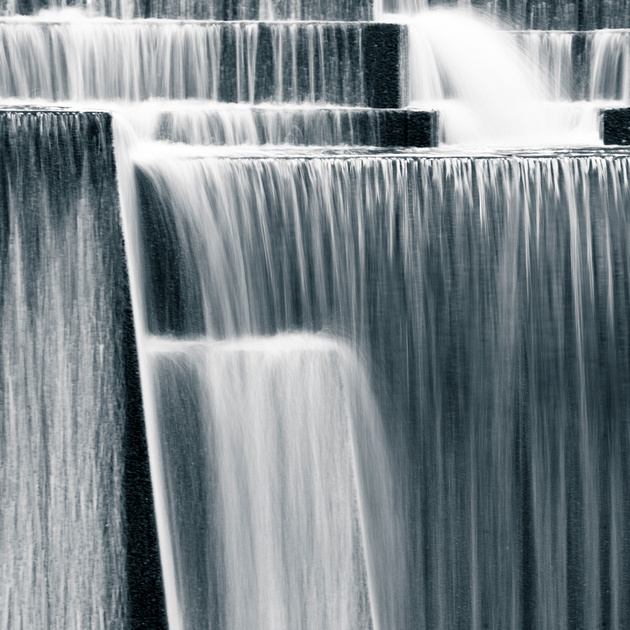 This week I'd like to take you on a journey to the culmination of one photo to at least six different images, if you count black and white versions as separate creations. Sometimes I think I make the process of image making sound too easy, as if my final stunning creation appears out of whole cloth, instead of as the end of a long process that could have easily ended up somewhere else. This is not to say that I'm some genius at post-processing - I could probably teach you "my secrets" in less than an hour. The real fun in using programs like Lightroom is that they put you in command of the processing of your own original photographs, so that your original intentions, or maybe completely different ones, come out in you final printed interpretations. Since I don't work on a computer all day, I even have fun; the second it stops being fun, I just stop. Artists certainly don't make a lot of money, but they can control their own working conditions. 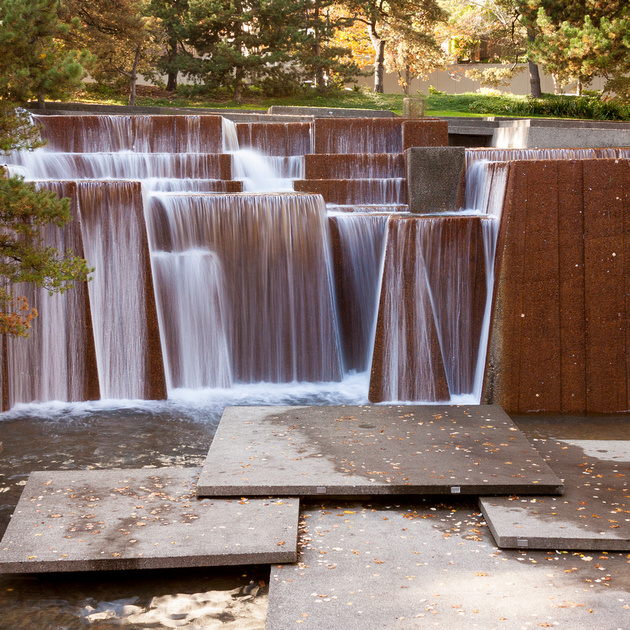 Ira's Fountain is one block of Downtown Portland, converted as if by magic into an acre of the Columbia Gorge. The world famous landscape architect Lawrence Halprin was asked to design a fountain to sit in front of our new Opera house. Instead he landscaped the entire block, and took advantage of what seemed like a design obstacle of a drop of twenty feet from one corner to another, to create an evocation of a gorge waterfall right in the middle of downtown. 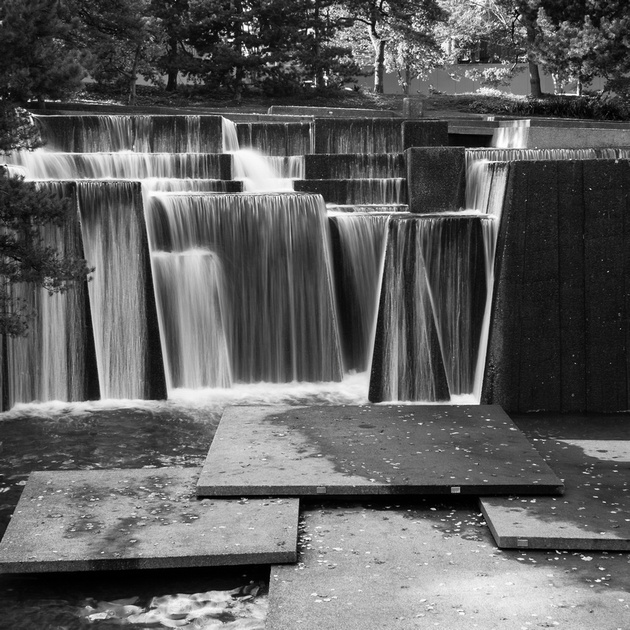 These three different visions of Ira's fountain are derived from the same original snapshot taken on a clear day at the end of October twelve years ago. On a hot summer day the fountain would be filled with dozens of children and their parents wishing and hoping that they wouldn't meet an early end playing on the waterfall. In fact the pools at the top are designed so that a swimmer would really want to jump rather than just make a mistake, so it's a lot safer than it looks. On performance nights, you can escape our hot barn of an opera house and take your expensive glass of intermission wine across the street to the Gorge. I'm taking this empty view on a pleasant fall day before the wind and rain have denuded all of the trees in the park. 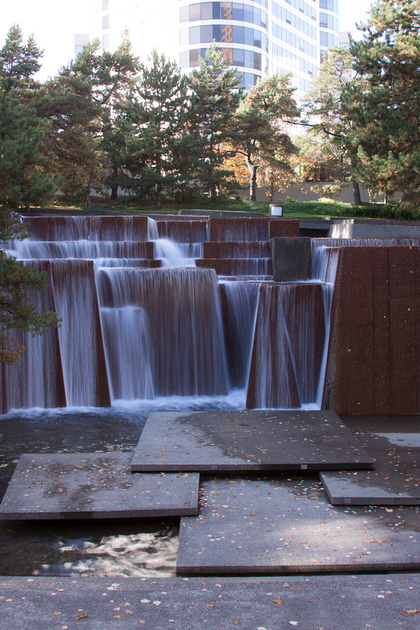 This is the original shot taken that day. At least it is straight and in focus, but it is nothing special. The exposure is off, the colors seem wrong, and the overexposed apartment building beyond is certainly adding nothing to the image. The concrete is a rather bad shade of brown , in my humble opinion, colored that way to resemble the Gorge's basalt after value engineering nixed the real thing. By the way, if you want to see the real thing, go to the FDR Memorial in Washington, D.C. It is very confusing to Portlander's, who don't understand why that memorial seems to be four renditions of Ira's Fountain. Due to the vagaries of national politics, Halprin's original idea for the memorial, with one outdoor room for each presidential term, accompanied by fountains to eliminate traffic noise, was held up by Republican opposition for so long that he eventually used the idea in Portland. Ira's Fountain, "copied " by the designer, was built a generation before the original design was finally realized in Washington. Of course a federal budget allowed real basalt, so there you go. 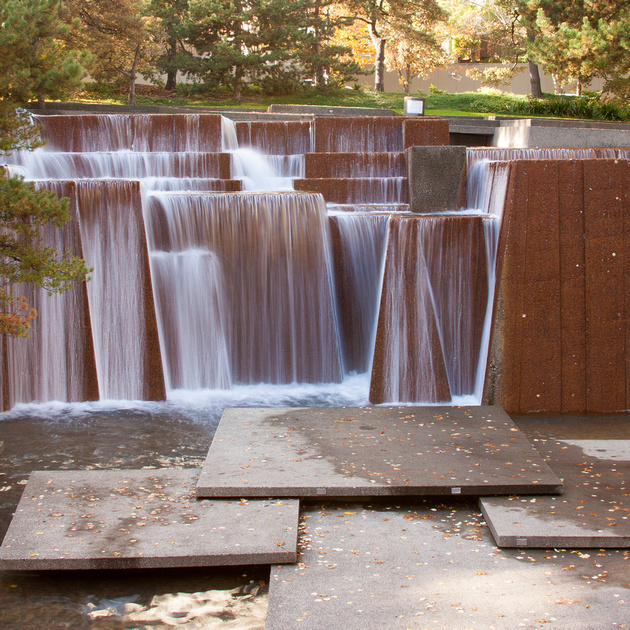 I could have tried to save the upper portion of the image, but I didn't think it was worth it, and coasters are square, so I solved the overexposure problems by just eliminating that portion. I then corrected the white balance, eliminating the blue cast by reconsidering the original which had been swayed by the sun in the eliminated background. The "shade" setting corrected the blue water, but unfortunately it reinforced that brown concrete.

Only two changes still remained. I used the magic of the replacement tool to eliminate the white sign on the concrete block above the waterfall. Look back at the previous version to see how annoying it is once you notice it. When there is a distraction in your image, there is no rule against eliminating it - this image is not destined for the New York Times. A subtle graduated filter darkened the top background of the image to draw the viewer's eye back down to the subject. It's as good a color photograph as yours truly can make it, a big improvement over the original, but now it's time to see if monochrome can help. This conversion at least eliminates that distracting brown. All of the other changes are already baked in, but it is a little too bright for me. 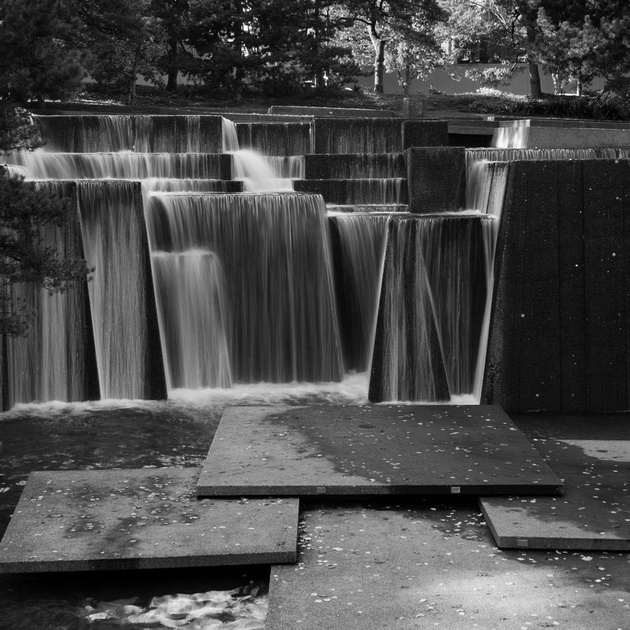 One technique to affect the exposure is to just deepen the black portions of the image, without affecting the lighter parts as much as changing overall exposure will. These selective changes allow more control on the way to more delicate changes that you brush in to small parts of the image. The image is now near where I want it - you are allowed to disagree.

As I can as well, so I subtly increased the overall exposure. Frequently the transition to print will darken the image because it is not backlit, so if an image appears dark, it might need some brightening. The spot removal tool also eliminated all of the dots especially on the dark stone on the right. They are probably water drops, but since they appear as sensor dust they must be eliminated. As usual, the black and white image can allow for more exposure manipulation without appearing unrealistic. And I did hate that brown, so I like this much better. 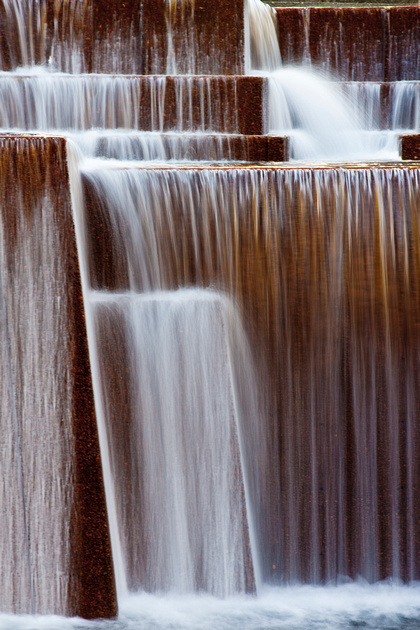 I always say that a good photograph has more images inside it. Once I looked at the image, I realized that a closer view would tell me more than the overall view. This is frequently a strategy that I try, and it fits into my usual way of viewing the world as a collection of more interesting parts. I am not alone in this, as a classic admonition is "to get closer." 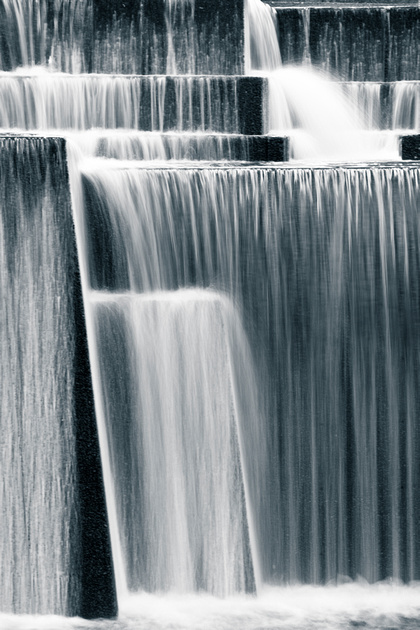 I still hate that brown, so there you go. I have gotten closer, but now it's time to get even closer by cropping to a square. 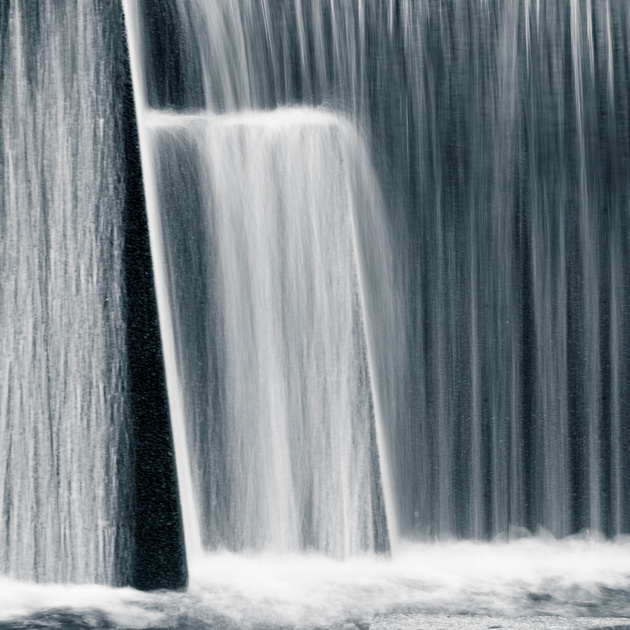 I first cropped to the bottom of the image, but I then I decided that I wanted to include more of the top that I thought was more dynamic. These are always interesting decisions on the way to a final image.

So there are three journeys to a final image. You are allowed to disagree, but they are mine, so you can only vote with your cash, and you don't necessarily get to see your other choices. I like my final image as an abstract, but as usual only a small number of people will even catch that this is Ira's Fountain, so sometimes I can get too close. The overall black and white image allows someone who has been to the park to appreciate my image-making; my abstract will only appeal to those who like the fountain as much as I do. What is very interesting is that some people have concluded that the image must be a close-up of an actual Gorge waterfall, which seems to bring the entire art imitating nature argument all the way round to the beginning. I hope that Halprin would approve. I also hope that Ira Kellar, the planner who fought for the park design, appreciates that Portland, in it's informal way, finally felt that it should be simply named after him.

Mike O'Brien
Hi, Richard-- I like the flow of the B&W images, even if you can't tell it's the Ira Keller Fountain. I would like to add that the fountain itself was designed by Angela Danadjieva, who worked for Halprin. Halprin's special gift to the city was to wade in when the fountain was dedicated and invite others to join him. Best, Mike
No comments posted.
Loading...
Subscribe
RSS
Recent Posts
LEARNING NEW WAYS TO DO THE SAME DAMN THING, PART TWO LEARNING NEW WAYS TO DO THE SAME DAMN THING, PART ONE 2021 : BEST IN SHOW, PART TWO 2021 : BEST IN SHOW PART ONE AUTUMN RAIN : A COLLECTION OF INTERPRETATIONS ANOTHER CACHE FROM THE ARCHIVES GAS : GEAR ACQUISITION SYNDROME IRA'S FOUNTAIN : A JOURNEY CROP 'TILL YOU DROP SAN FRANCISCO MEMORIES
Keywords
Archive
January February March April May June July August September October November December
© Richard Lishner Photography
Powered by ZENFOLIO User Agreement
Cancel
Continue