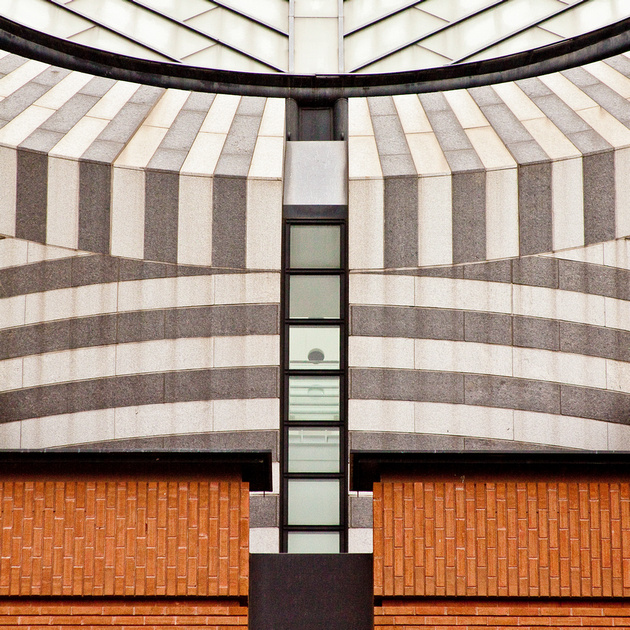 This week I'd like to take another walk down memory lane, courtesy of my latest battle to preserve my photographic archive. The failure, maybe, of another hard drive caused another disruption to what I thought erroneously was a fool-proof system. I would encourage everyone to abandon the belief that it is possible to create such a system. In reality what everyone should do is to determine which images are really important, let's say 100 to start, and then ensure that they are backed up six ways to Sunday. Once you prove to yourself that this is true, then you can move on to the next important 100 images. Remember that even Ansel Adams' magnum opus only amounts to 400 photos. I think that my problems stem from trying to preserve too much instead of concentrating on what is important. That's why I have a list of important images called "The Missing" while at the same time I have multiple copies of unimportant or downright horrible photos numbering in the thousands. Just saying. 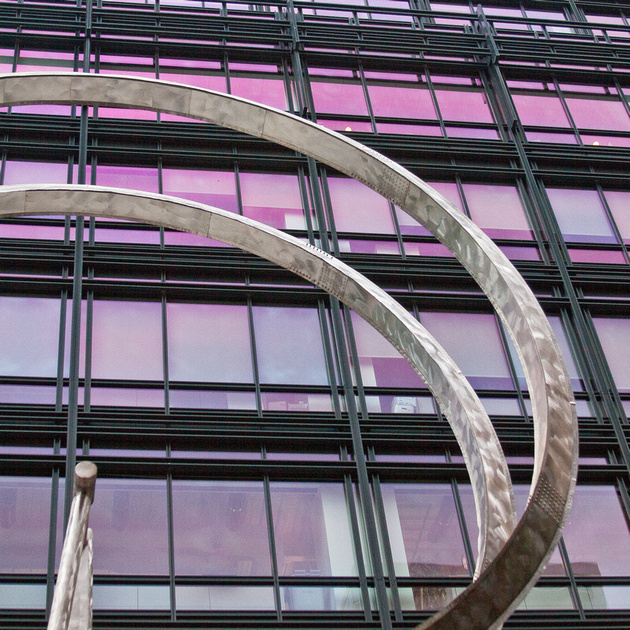 I've had the opportunity to revisit San Francisco, which I last explored during an AIA convention in 2009. While saving some old images I have also had the opportunity to find some images that I had previously ignored. As usual, most of these images are the result of my singular way of looking at things. I have no illusions that most people might agree with me, and encourage you to create images that please yourself. If anyone else salutes, that's just a bonus. Most people are totally consumed with the image's "subject", which restricts what your image might really be about. Anything that is a detailed look at something, or even worse an abstract, will cause most people's eyes to glaze over. Including other photographers. Your art is your own, and it can be very liberating once you begin to acknowledge that your audience might be very limited. 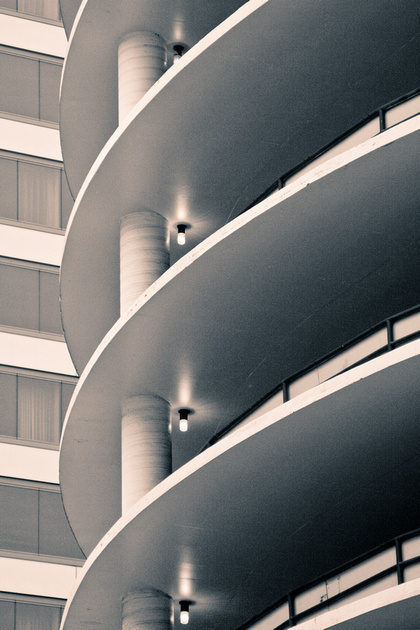 These first three images exemplify what I mean. They are not at all typical tourist images of San Francisco. In fact, unless you are unfamiliar with the San Francisco Museum of Modern Art, there might be no way you could place any of these images at all. And that's all right, since they are not meant to be part of a collection of the city's greatest hits, just my reaction to some of the things I saw there. The first image was my take on a new building that I loved. It is so tightly cropped not only because I thought this fragment was interesting, but that I felt that the overall image of the museum was clearly ruined by the building just behind it. Twelve years later my vision has been justified in two ways. The first instance is when I realized that a famous photographer, John Paul Caponigro, had made exactly the same image of the museum. At least someone had agreed with me. The second was when the museum subsequently spent years and millions to erect an addition behind the museum that solved the problem by serving as an architectural backdrop to the original building. The subjects of the other two images are completely unimportant. I reacted to color and then to the absence of color. I also was interested in the conjunction of curves with the rectilinear world. I didn't even park in the parking garage, which I appreciated because it unapologetically showed off its concrete slabs by holding back the railings; the only color in the entire structure were the yellow light bulbs which I lost in the black and white. 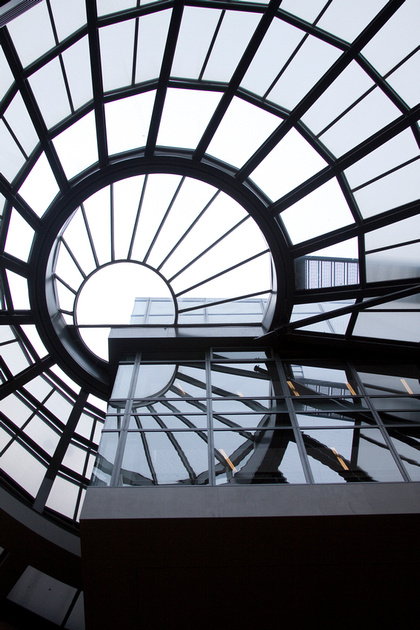 This was another newer building at the time, and I just loved the exuberance of this skylight and the reflections off of a glass meeting room that interrupted the grand space. Curves and rectangles make another appearance. The black and white version has subtly different framing that clarifies the reflection in the meeting room. 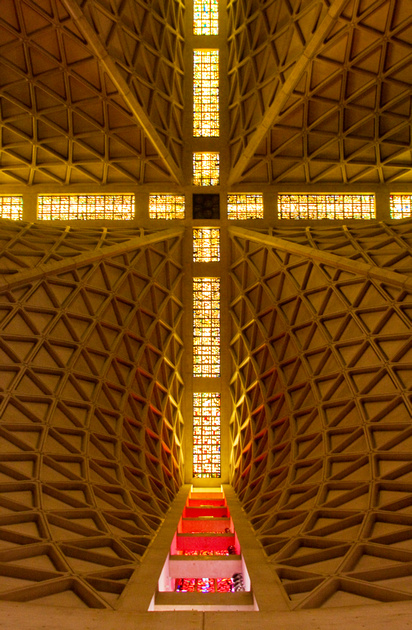 This is another famous San Francisco interior of a slightly older era, but about as unashamedly modern cathedral as you might find anywhere. A concrete tour-de-force, it's pretty hard to convey the power of the space in just two dimensions. Here I follow one wall of glass, which is really inseparable from the arched roof structure that leads to the culminating central tower. Not bad for someone without a wide angle lens. 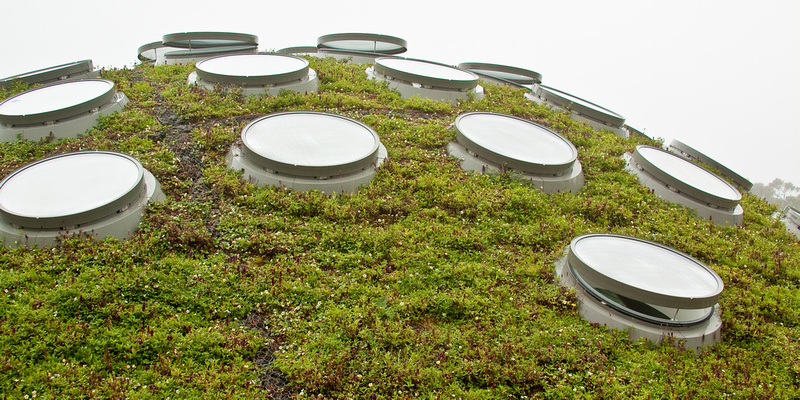 THE GREEN BLOB HAS A HUNDRED EYES : FINAL VERSION

Okay, I think you might have noticed that most of the tours that I participated during the vacation were centered upon the newest buildings, especially the museums, that had recently been constructed in San Francisco just after the turn of the century. This enigmatic monster is just part of the roof of the new home of the city's science museum. One of the world's first large green roofs, the planting was interrupted by dozens of circular skylights that lit the main space below. 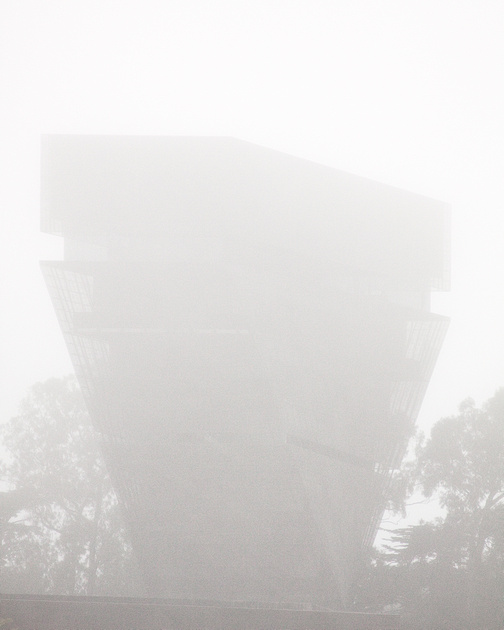 Across the way in Golden Gate Park was the new building for the De Young Art Museum; construction tends to boom following earthquakes like the one that interrupted the World Series in 1995. This was a very interesting building, an early work by a French firm Herzog and de Meuron,which specializes in coming up with entirely new facade systems which seem to frequently be the entire raison d'etre for their designs. Here the entire building is clad with an outer copper skin which is laced with holes in front of the glass curtain wall. Kind of an architectural Swiss cheese if you will. I always appreciate it when another architect gets away with a completely arbitrary move, since my clients usually never let me indulge myself in that manner. The De Young is a very spacious two-story building. The architects convinced the museum that they needed an architectural symbol, so they designed a tower for offices to jut above the rest of the building. They got their tower, provocatively shaped it asymmetrically, and accomplished even more power over design and budget since they now had to design the roof as a fifth facade, since most of the tower's view was of the roof below. The result was even more acres of copper, and the building now achieved its final form as an aircraft carrier complete with conning tower. The architects belatedly justified their tower as a viewing tower for all of San Francisco. My image, taken in a fit of laughter when I exited the Science Museum across the way, proves, at least to me, how misbegotten this notion was in this foggy neighborhood. 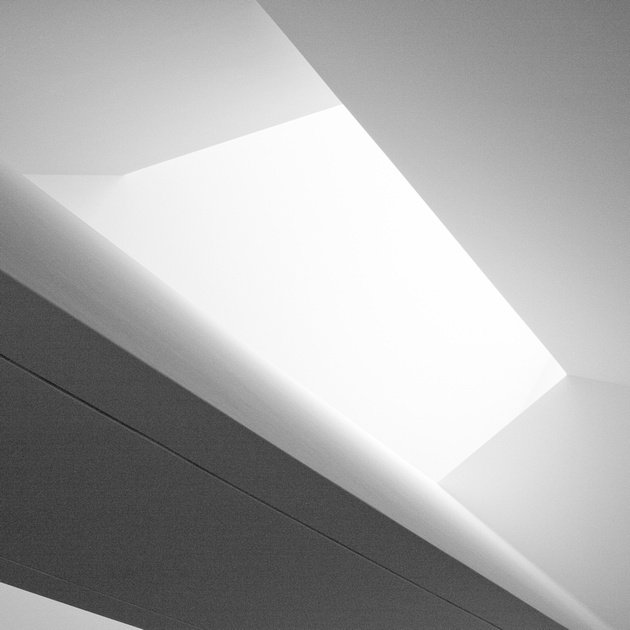 I have never met a skylight that I could resist, especially in a cloudy climate like San Francisco or Portland. Most of the time I just wish there were even more; I once convinced a client to install 24 skylights in her home, having lost only a few to budget and sanity. She didn't need electricity during the day. Here is a sculptural skylight at the new Asian Library at the Cal's Berkeley campus which cleverly lit a second floor reading room. 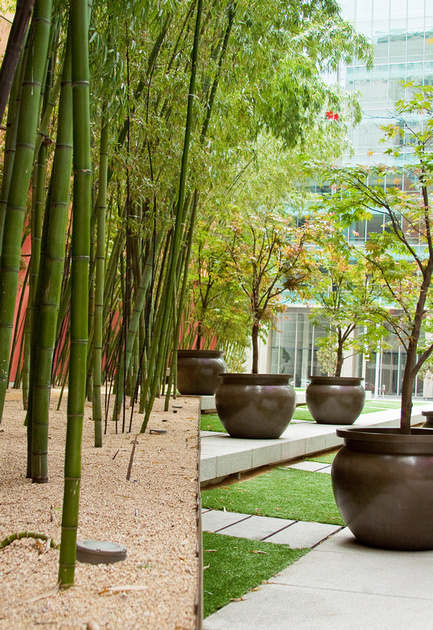 ON THE LINE : FINAL VERSION

Sometimes I actually got outside. Here is a new park Downtown which I fell in love with, especially in the way it managed to create separate zones within the same park. I focused on one of these boundaries, a change of height and materials which diagonally cut the park into lounging and looking zones. 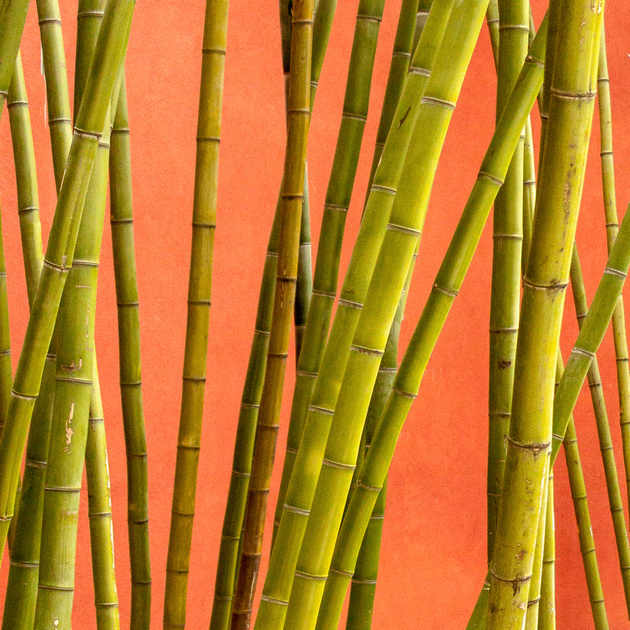 I loved this grove of timber bamboo placed against a contrasting orange stucco wall, and tried to make a natural abstract. 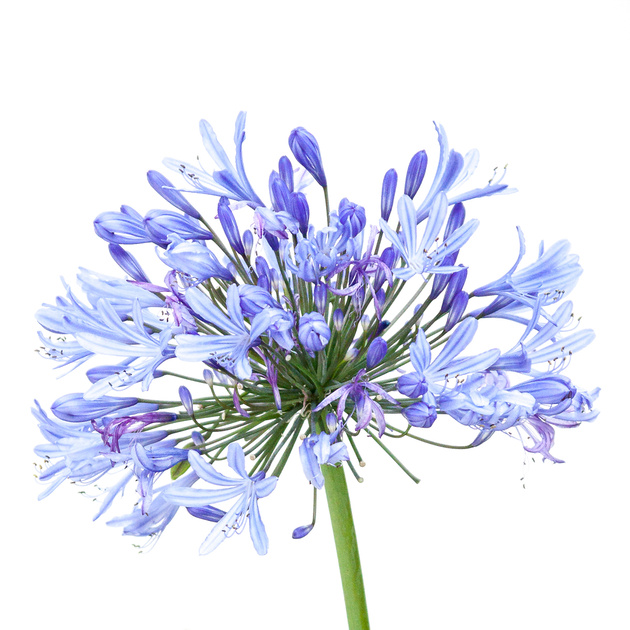 It was only while investigating "The Missing" that I realized that this purple flower came from San  Francisco. 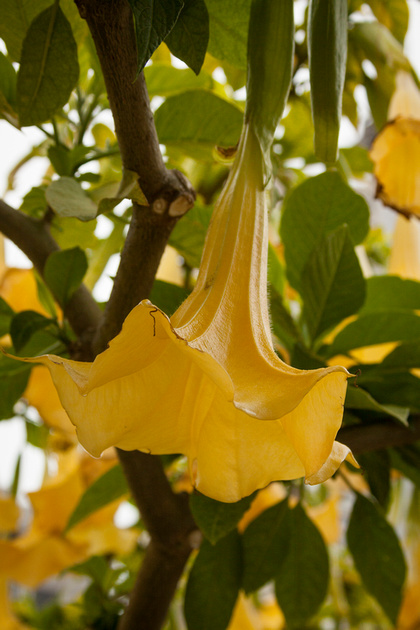 I had never seen flowers like this, which were one of the main plantings at Union Square Downtown. 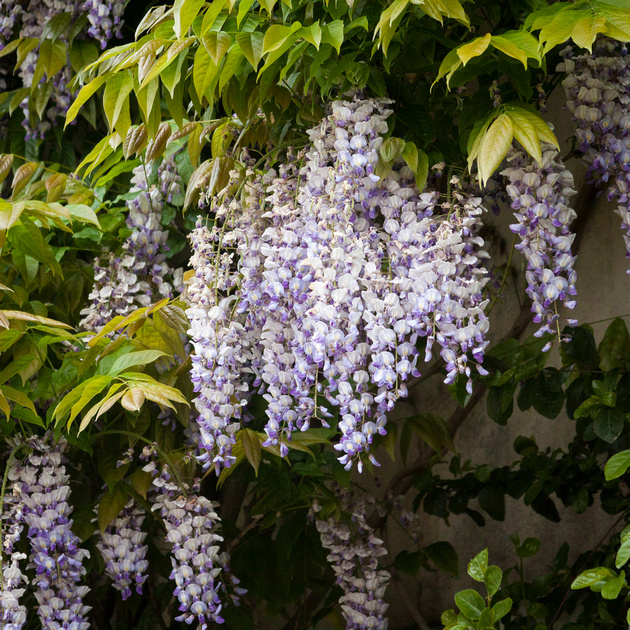 I was also overwhelmed by the exuberant patches of wisteria which I encountered throughout the city. 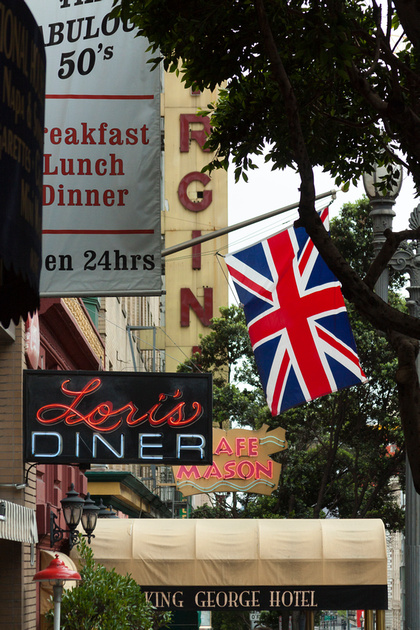 Just in case you think I can't take a street photograph, I include this view of my hotel, which is my home away from home in San Francisco. I heartily recommend it, as it is around the corner from the grand St. Francis Hotel, at a savings of literally hundreds of dollars a night. It's a great old hotel, as long as you don't mind the oldest, smallest,and slowest elevators in the city. Just look for the Union Jack. San Francisco loves Breakfast almost as much as Portland - I would never eat lunch, since Breakfast can hold you over until Dinner. Dozens of such places abound in the neighborhood.

But I love abstraction, so the final two images today are abstracts drawn from another pair of new buildings I encountered on my walks through the city. They have little to do with the buildings as a whole; I might hazard a guess that few besides their architects could instantly recognize their buildings as the "subject." Like most abstracts, viewers immediately want to know "what it is" and then are disappointed that they guessed wrong. I sometimes feel like a magician who has revealed the trick. I was interested in the color and the pattern. By withholding the context, viewers can rarely tell that these are glass sun-shading fins on one facade of a new courthouse in San Francisco. Each fin is a story tall. Viewers love the image and never buy it. What can you do? 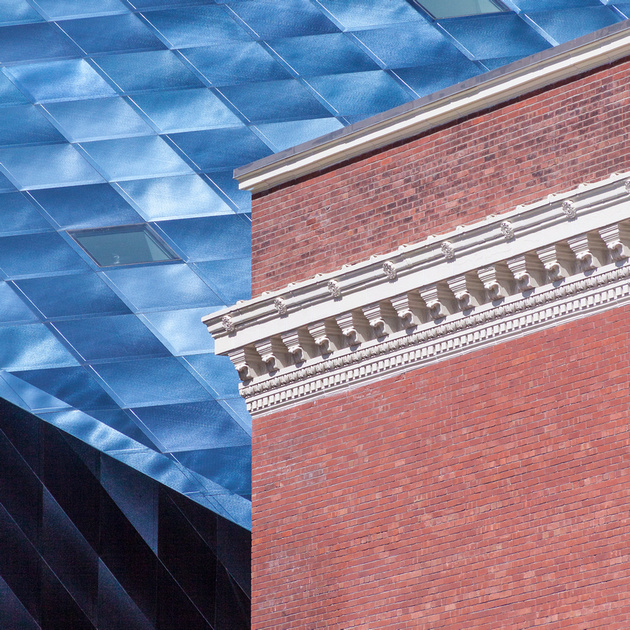 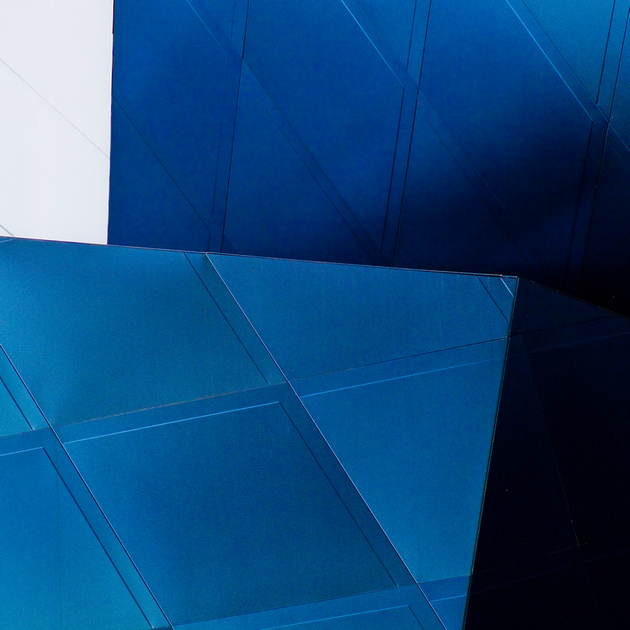 This two images were my take on Daniel Libeskind's Jewish Museum in San Francisco. A tilted metal-clad square colliding with a century-old brick office building, the building disappointed me even as a sculpture when I realized that the interior had nothing to do with the provocative exterior shape. But I loved the metal panels, so I focused on just a few and named the image after Miles' seminal album. Proving once again that your images can show your love for the parts without caring about the whole. Your images are not necessarily documents of what you saw, or where you went, but can achieve artistic merit if they can express what you felt that was important to you.