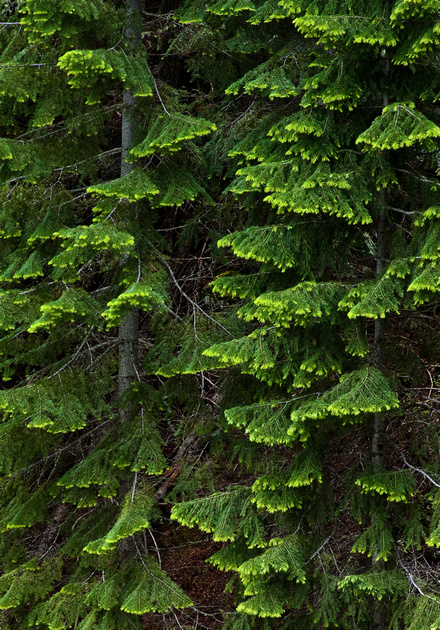 This week I'd like to take a detailed look at two of my images that sum up most of my feelings about shooting in the forest, or as our English friends say, "woodland " photographs. I believe there are certain helpful hints, not "rules", that are useful when you are attempting to show your wonder at forest scenes. These two images are among my most successful, and for once the public seems to agree with me since they are among my most popular images.

The first image above was made on or near the Mackenzie River in Central Oregon on a reasonably long hike that followed a ridge line and allowed for long-range views of the forest edge. This area is quite beautiful, with some great hikes, places to soak in mineral springs, see a Clear Lake so clear that you will not believe it, and generally follow the Mackenzie on the way to Bend. What attracted my eye was the phenomenon seen in Spring, when you can clearly see the new growth at the branch ends of our native fir trees. The contrasting shades of green against the overall dark forest clearly told me it was Spring, and the forest was renewing itself.

Why do I believe this image works? It follows my three hints for making woodland photographs:

1. Whatever you do, try not to include much, or if possible, any sky, unless the photo is really about the sky. Humans naturally are attracted to the brightest parts of any scene, and even on cloudy days the sky is probably much brighter than the woods. Any sky included, unless it is a very small part of the scene, will attract viewers attention from the subject at hand. So just leave it out! The lack of a horizon in any landscape image will focus viewers attention elsewhere, and this kind of immersion is especially helpful in conveying "a walk in the woods."

2. It's probably best if it is a cloudy day, since the bane of most woodland photos is the excessive contrast that is often part of the scene, even if you are smart enough to lose the sky. Our eyes adjust much better to high contrast scenes than our stupid cameras do, so often we review our images with a disappointed sense that the scene was a lot more chaotic than in real life - the camera registers, and cannot smooth out, all that sun and shade that our minds adjust to. So that great beauty dish, otherwise known as cloud cover, is great for a walk in the woods.

3. The woods are quite a chaotic place, even if it's not the Amazon Rain Forest. There is hell of a lot going on, and our job as image makers is to distill and make some kind of order out of the chaos, to offer our viewers a point of view. In the woods it is often not just why am I interested in that, but something even more basic, like what the hell am I looking at? The viewer was not there, was not looking, so we have to orient them, find some order in nature. This is the artistic element, bringing a composition together that will show the viewer where to look, and what to recognize in the scene that caused you to go "wow." Compositional elements like line, form, and color will as always play a large role, if you can find them and make them apparent to the viewer. Otherwise you are risking ARAT, the derisive acronym some photographers use for these landscapes, "Another Rock, Another Tree." So since we want our images to be about something in addition to "the woods", this involves leaving things out in such a disorganized natural environment. Like most photography, we are trying to take things out, a distillation process rather than an additive one like painting.

As you can see, the woods are hard because some of the things photographers look for, like contrast or light itself, can only cause problems in such a setting. A fine landscape photographer you can find on You Tube, Adam Gibbs, specializes in the woodland, and has even entitled his recent monograph "Quiet Light", because that is what he is looking for in the woods. It also helps if you can conjure up fog, the ultimate forest simplifier, which most English photographers seem to encounter at the drop of a hat. 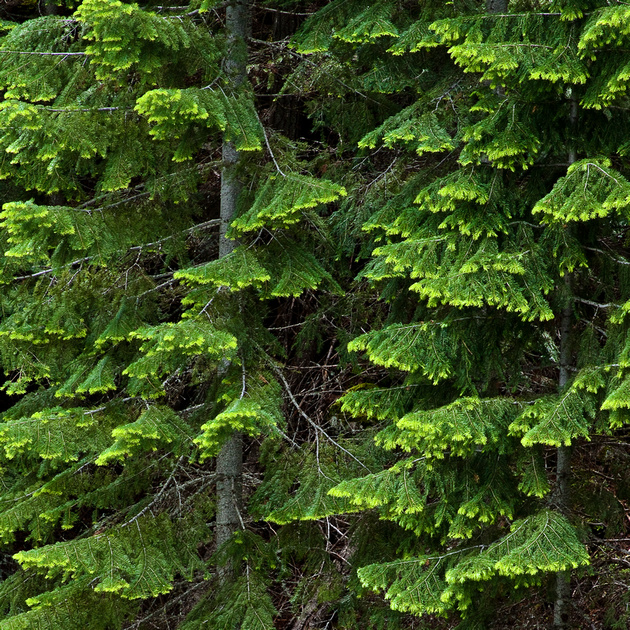 In this image, i ve left out the sky, went on my walk on a typically cloudy Oregon day, and tried to respond to the overwhelming pattern I was seeing in the forest. I wasn't looking at one tree, but at all of the trees, and as far as the viewer is concerned,this pattern was never interrupted, because I deliberately did not reveal its extent - no sky, no riverbank, no bare patch. These two versions show two subtle exposure differences as well as the square coaster crop. In the first slightly darker exposure I showed clearly that I didn't care about those deep dark woods, letting them go pretty dark. I went lighter in the second attempt to try to emphasize the light tips even more, but maybe that lightens the woods too much. Like most things, the Goldilocks spot is probably somewher in the middle. Although I have gotten used to the square crop after selling so many coasters, I like the original vertical since these are trees after all, and they "look better" as taller objects, even if you don't show their bottoms or tops. Sort of like skyscrapers in my usual urban context. 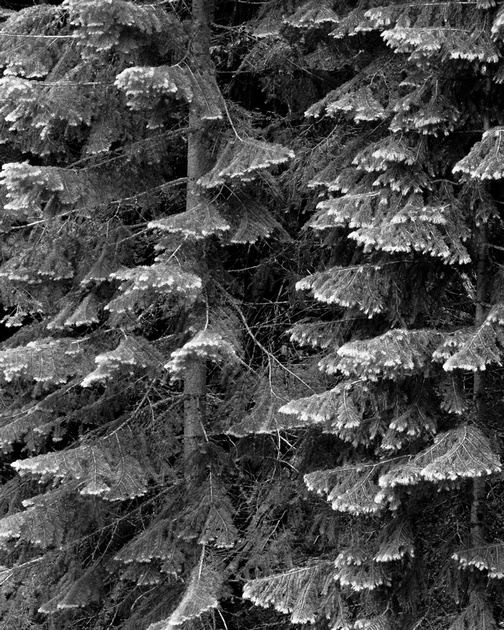 Well here I have done two things. I've taken the compromise position between the basic 4:6 ratio native to my camera, and the 1:1 coaster ratio, by going to that classic 4:5 ratio beloved by framers everywhere, who still cling to the historic 8 x 10 or 16 x 20 ratios which were once natural enlargements of 4 x 5 view cameras. This squarer ratio seems to work here, and the monochromatic treatment allows for darker woods and brighter tips. But I'm really missing the shades of green brought out in color, and it's interesting that Lightroom can't differentiate between these two shades, so that I can't treat them as different colors in black and white, just different light levels. So at least here I think the color version has more to offer. 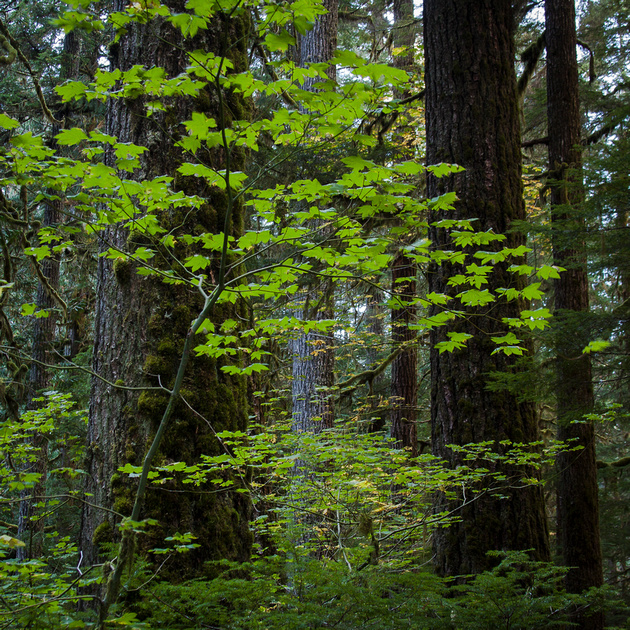 He' so clever isn't he, with his captions - too clever by half, since I'm always confusing these two images since I named the second in relation to the first. Thi image was made in Olympic National Park In Washington State, but of course it could be taken in most any forest in the Pacific Northwest. The square crop, the light, and the natural color differences between the young Vine Maple and its older and darker fir trees, places Vine Maple front and center. Since even my focus was on the bright green leaves, the Vine Maple literally jumps out of the composition, in both sharpness and illumination. These contrasts give the viewer something to focus on. I've again denied viewers both the ground and the sky and even the top of my subject. But you are there, even though you don't exactly no where "there" is, because you can almost touch the tree.

Not bad, if I say so myself. Black and White allows me to highlight the contrast to the degree that the Vine Maple still jumps out of the darker woods, even though all the greens are now shades of grey. I'm actually only troubled now by the lighter fir in the middle background, whose natural grey color no longer contrasts as well as a background for our green leaves. But upon further work, Lightroom should be able to darken the grey tree more than the green leaves - but not bad, since contrast was really the organizing principle. I still like the color version better. And since I have of course misplaced the original file, you'll have to take my word for it concerning the incredible power of my square crop. 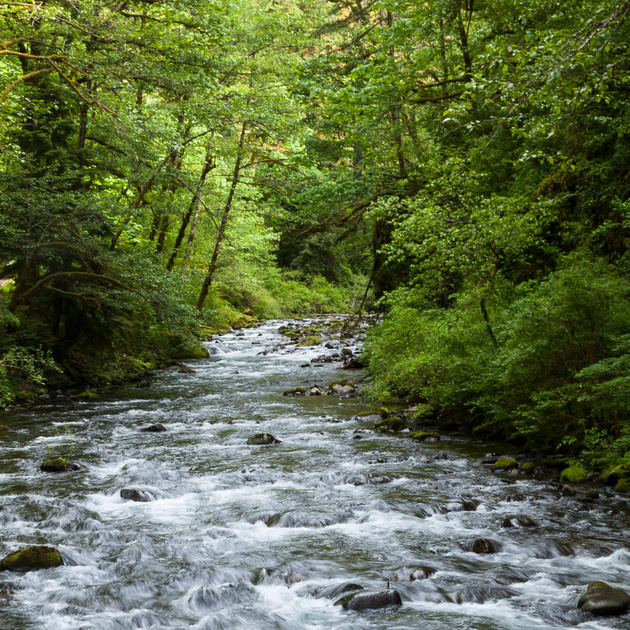 I'll let that be it for today, but I will throw in a few more shots to let you look for more organizing principles in the woodland. Among the most important is the water that makes the forest in the first place. This subject is readily available since most of our hikes are usually oriented around watercourses of various scales - the operating principal of most hikes being to try to follow the most walk-able grades, even up mountains. Thus a river is usually a good bet, although "Waterfall Wednesday" on Instagram makes it clear that most people are most excited when the grade abruptly changes. Water's organizing power is offset by its vast difference in luminosity  to the forest, but if we can control that through exposure choices it can provide great focal points on our walk through the woods. 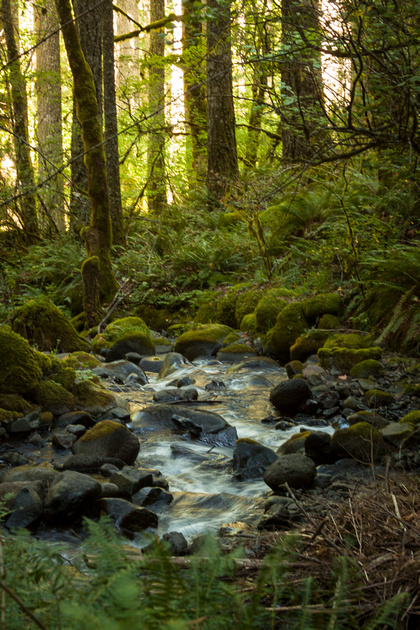 Streams can work as well as rivers, and its often more credible, since you are on a bank, not standing in your waders in the rapids. 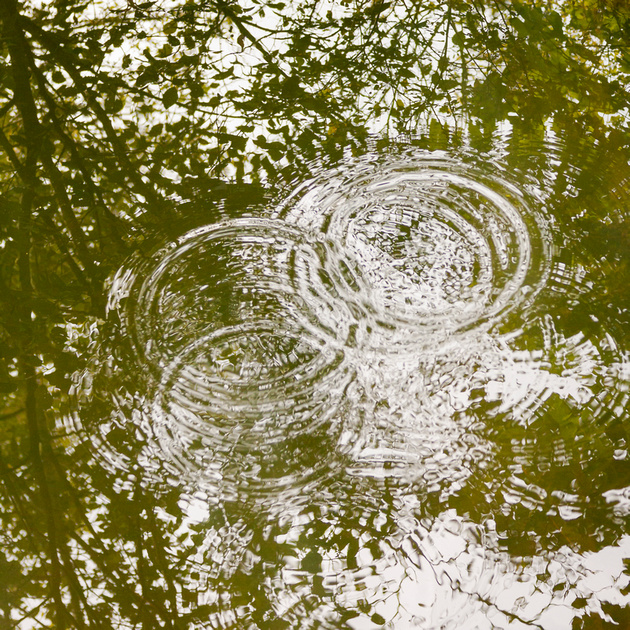 And finally you can use a very intimate view to still say forest, even if it just some rain drops and the trees are upside down. Notice how the recognizable geometric circles clue you in on to what you are looking at, even as you have fallen through the looking glass. Enjoy your next walk in the woods.