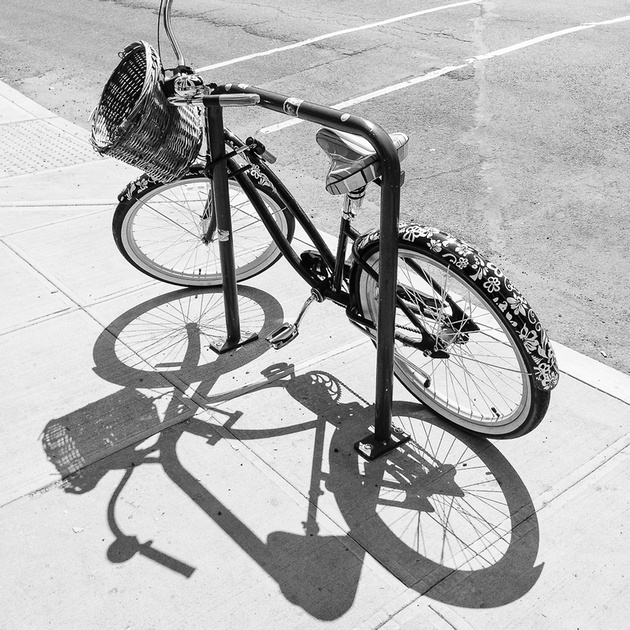 The spirit of today's essay will be play. Sometimes it is hard to describe the goals a photographer has in going out with their camera, especially when they are not in some far-flung exotic location. What are you looking for in a place where you have already spent a good deal of time, that threatens to yield no new images beyond what you have already taken? Yes, I can harp on the "process", on the need to get those 10,000 exposures under your belt to get enough practice to ensure your bona fides as a photographer, but that kind of motivation strikes me as about as much fun as walking laps on the track. I feel that the least a photographic outing should provide is some fun. And I don't just mean a good walk, although there is nothing wrong with that. But remember that as "golf is a good walk spoiled", it is a good idea to juice up your expectations when you head out with your camera by coming up with some artificial thing you might be looking for that day. Of course if an award-winning shot crosses your path you will take it, but is there is something, like a certain lens, or just taking verticals, or shooting black and white with intention, that can motivate you to take a walk in the neighborhood?

One of the ways I've found to play over the years is to go out and look for shadows as a subject in and of themselves. I find them interesting, if occasionally confusing, and of course they are almost always around. Shadows are the yang to light, which is of course the yin photographers are supposed to be painting with. What's also nice about shadows is that they are frequently best when the light "is bad"; photographers who can't stomach sunrise or want dinner instead of sunset can find great shadows at more civilized times of day. This can be very useful if your spouse, like most humans, seems to prefer hiking on a beautiful sunny day, when a "proper landscape photographer" would prefer to be editing their sunrise shots or grabbing a siesta.

The shadow shot can prove that there is no such thing as bad light, and is a boon to the graphic images that I prefer. The shadow is a cousin of the silhouette, in that no detail is expected in a shadow, just a well-defined shape, and a certain amount of soft focus is almost expected. And since the subject of the photo is the shadow, black and white is frequently just as good if not better than color, since shadows, if they have any color at all, are at best just a darker shade of the general environment.

The first photo above is a great example of play. I'm enjoying my croissant on Division Street, way after the light has gone bad, because my idea of breakfast renders brunch quite useless as a slacker construct. I've noticed the shadow of a bicycle locked to a generic publicly mandated bike rack that us urban design types have labeled a "staple". Now I didn't go out to shoot shadows, but the only reason to take this shot is the shadow, and the only reason this take won over the other half-dozen I shot off was the coherence of the shadow. When I looked at the photo later I knew that Black and White was a given. 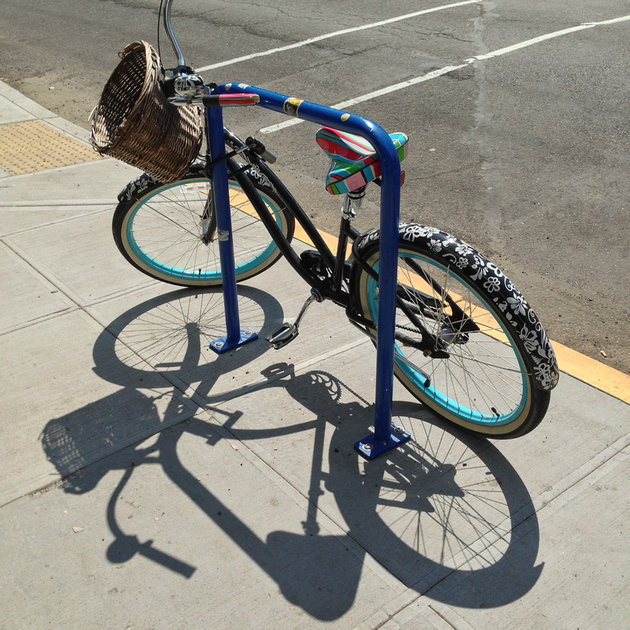 BICYCLE SHADOWS - OUT OF CAMERA

Now I'm not saying that it might not have been fun to meet the cyclist of this fanciful rig, reality is certainly appalling if you're interested in shadows. Black and white has eliminated all of the distractions of the "color scheme", as well as the blue of the staple and the yellow curb. Monoochrome has allowed me to deepen the shadow, lighten the pavement, and has even seemed to clean up the street and sidewalk. The texture of the wicker basket really comes out, and the shadow play includes a bit of confusion over the gender of the bicycle, since the staple seems to imply a boy's bike. Black and white has solidified the idea that the shadow is the real subject. 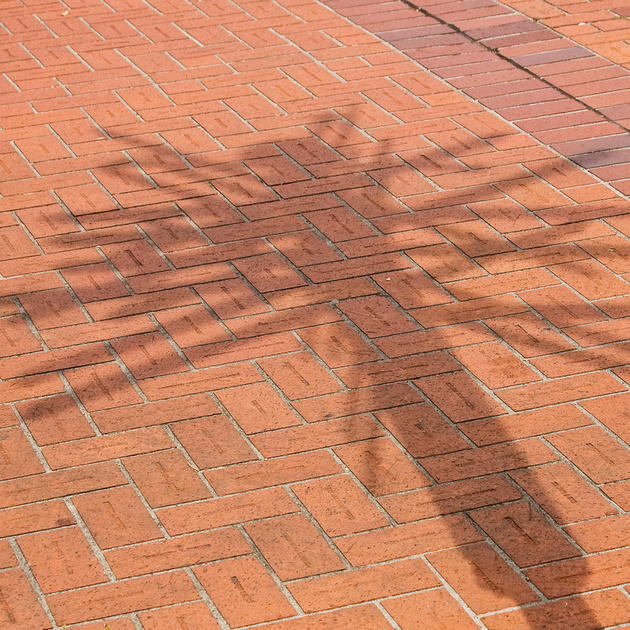 Sometimes color photos can be good shadow shots, especially if they really are a monochrome photo, just not black and white. Here is the shadow of what I call the MASH sign in Portland's Pioneer Courthouse Square, which highlights the distances and directions of places like sister cities, other notable public square around the world, and throws in a few bad dad jokes to spice things up. By the way, if you want to age yourself, one of the great ways is to call this the Mash sign, because the pretty young thing will have no idea of what you are talking about. In my usual search for abstraction bordering on obscurity, I've now take a photo of a sign without taking the sign itself - only those who have noticed the sign will be in the know. I happen to be an orange fan, but this is a monochromatic image. 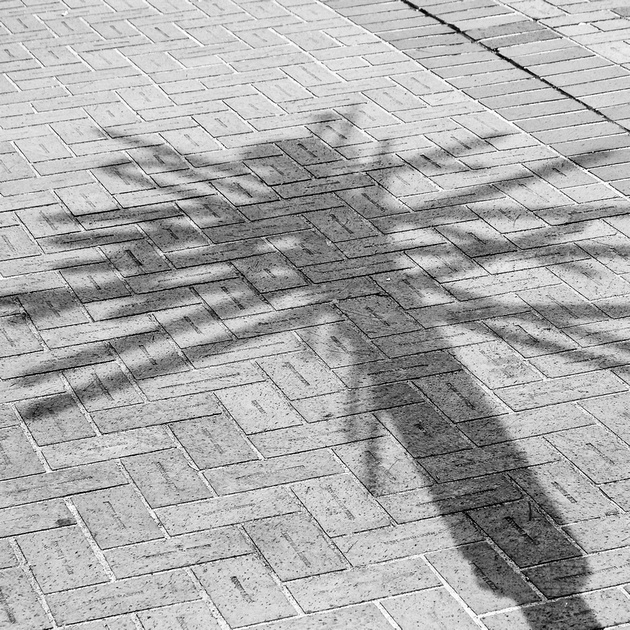 Now you see what I mean. Black and white does allow me to deepen the shadow, and to lighten the bricks, thus increasing the contrast within Portland's realistic grey range. And you don't have to enjoy orange. 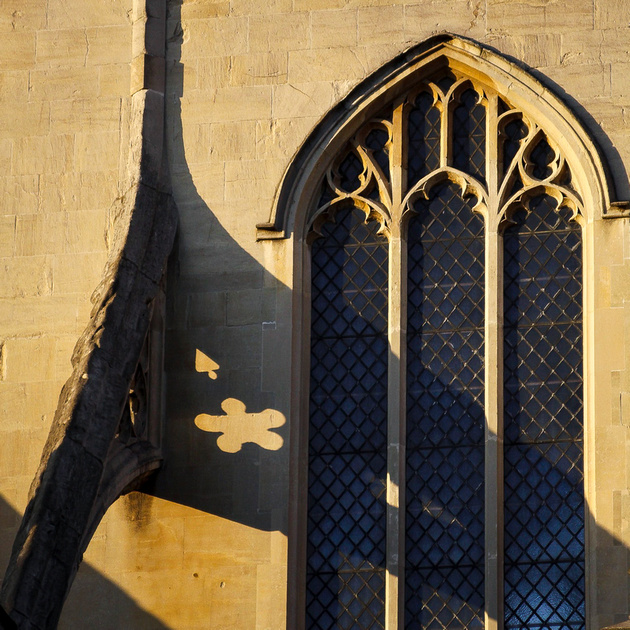 Yes, it's a beautiful window, and the texture on the sandstone is certainly benefiting from that great sidelight, but the real subject of this image is the shadow of the flying buttress, whose decoration is only revealed in the shadow. The ace of spades has been played, much to the dismay of your opponent, who just throws up his hands in defeat. And although shadows really don't have color, notice how they can change the white balance - the shadow has brought out the blues in the window glass that are missing in the warmer sun. 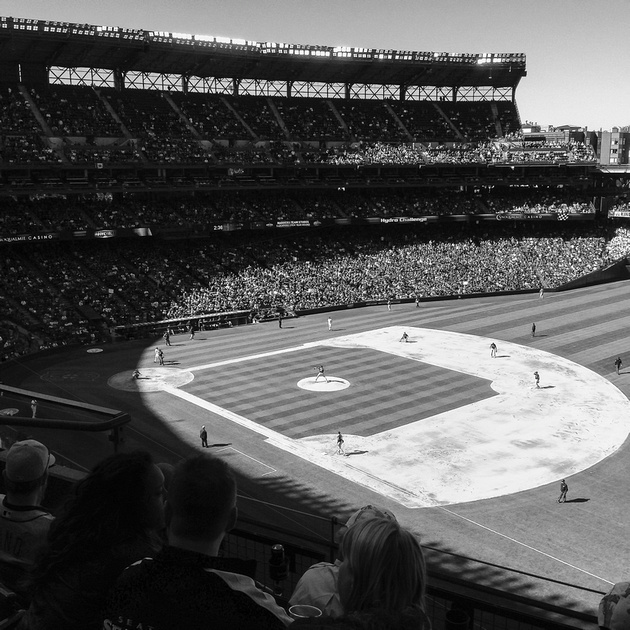 We are at Seattle's ballpark, and we can see why hitters hate day games. In a few minutes that shadow will cross home, and it will be very hard to pick up the pitch when the hitter is in shadow and the pitcher is in the blazing sun. I like the shadow's opposition to the strong curve of the diamond. Black and white allows me to realistically increase the contrast, while eliminating any and all distracting colors in the crowd. 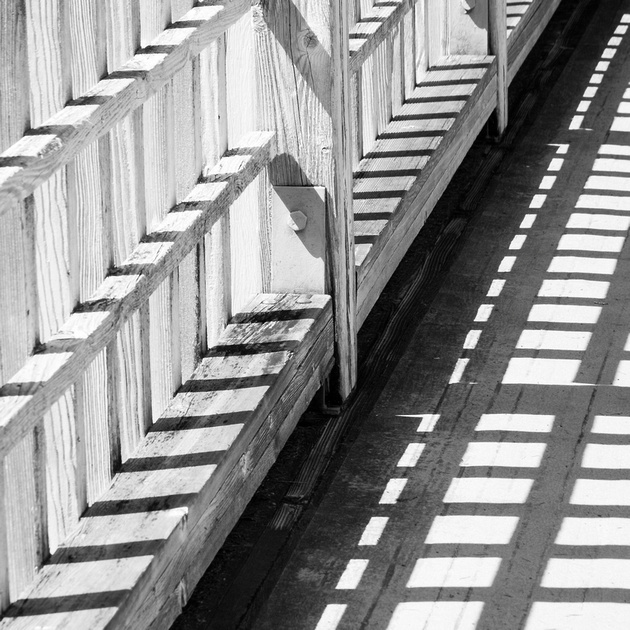 I'm out for a hike with my wife, the light is "bad", but that doesn't mean I can't find shadows on the bridge while she looks at the river like a normal person. By cropping down to remove all context, it becomes all about about the shadows, with some further discussion about their formation. Again the monochrome just exchanges black and white for different wood tones, but does get rid of some potentially distracting wood grain. 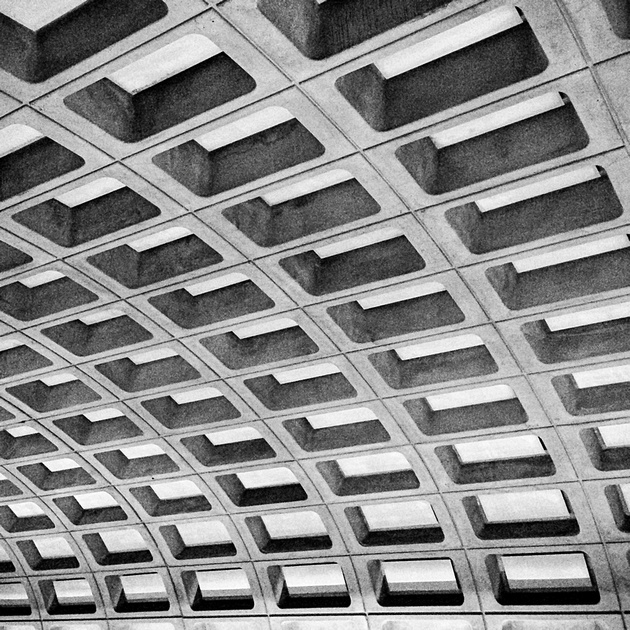 Shadows require light - that doesn't have to mean natural light. As an urban landscape photographer, it can help to use shadows where you find them, even underground. This detail of the typical concrete coffers of the Metro takes advantage of the lighting scheme , where the ambient light comes from below, and the shadows are reversed from what we normally are used to - kind of like the Halloween lighting of a scary portrait lit by an upturned flashlight. 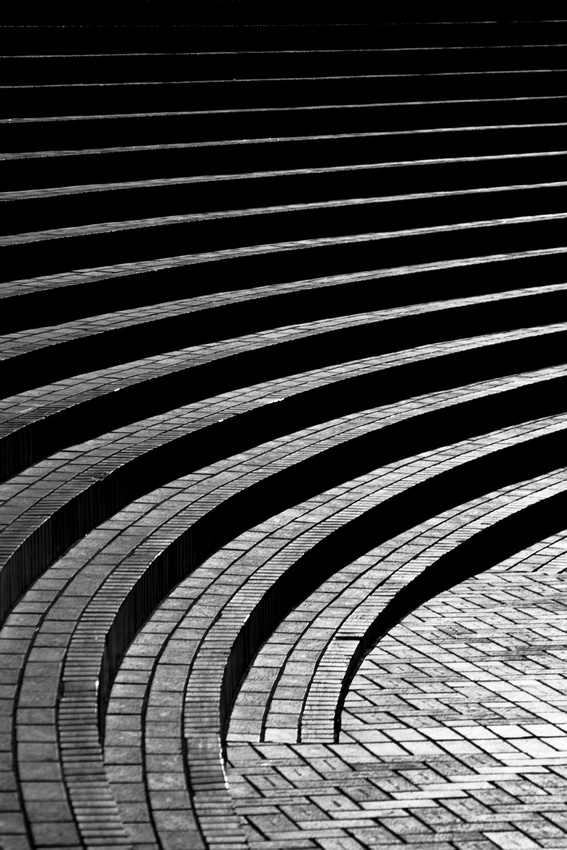 You can even find shadows at night, as long as their is a light source. This shot of the amphitheater at Pioneer Courthouse Square relies on the deep black shadows to define the stairs lit by the lighting at the square's periphery, beyond the curve. While shadows in nature are frequently just confusing, like in the forest, in urban environments shadows can actually clarify and simplify. It's analogous to reflections in the landscape, which are toned down by the use of polarizing filters (think sunglasses for your camera). Urban landscape photographers delight in the reflections that these polarizing filters are supposed to eliminate! Where is the thin line between reflections and shadows? I think it has something to do with the color of the reflection - black turns it into a shadow, in my opinion, but it can be hazy. 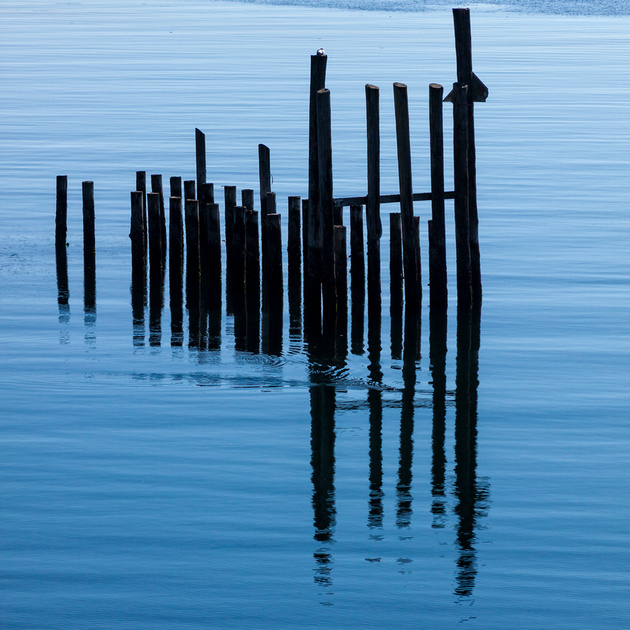 This is a silhouette, and it's reflection in Puget Sound, but I think its charm is its charm is the shadowy nature present here. Black backlit logs reflect as black shadows, and the imperfect reflections of the wavy water cause some confusion over where the waterline actually is - only the shadow knows. Please forgive me. 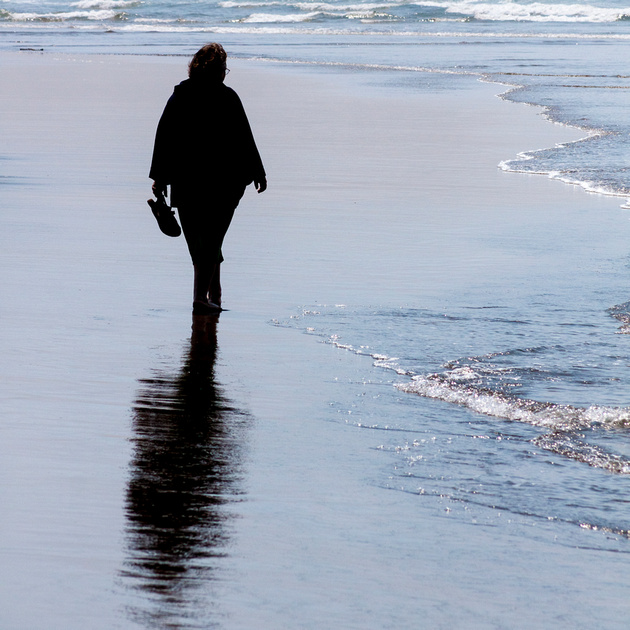 This shadow portrait of my backlit wife reflected in the wet sand also plays on the boundary of shadow versus reflection. 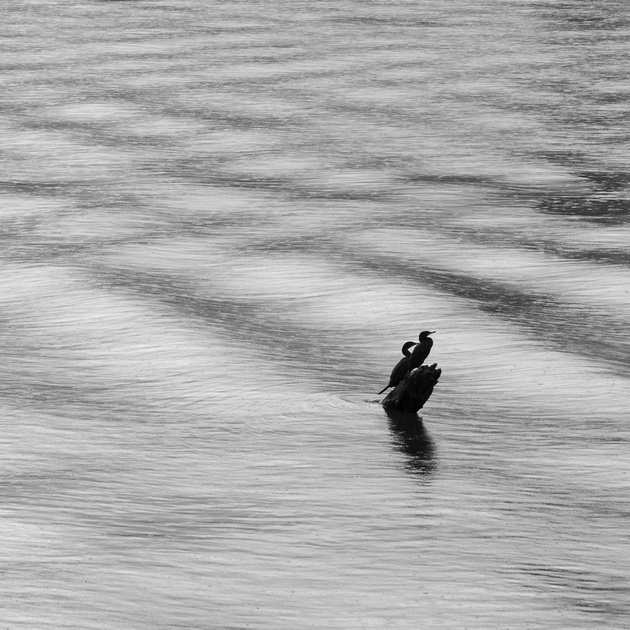 This is more silhouette than anything else, but what makes the photo for me is the grid of shadows, beyond the herons on the Willamette, which for the life of me I couldn't understand at the time or later. Yes they are shadows of waves, but why do they cross?  It's almost as if God is having fun like the landscape crew mowing the ballpark outfield grass. 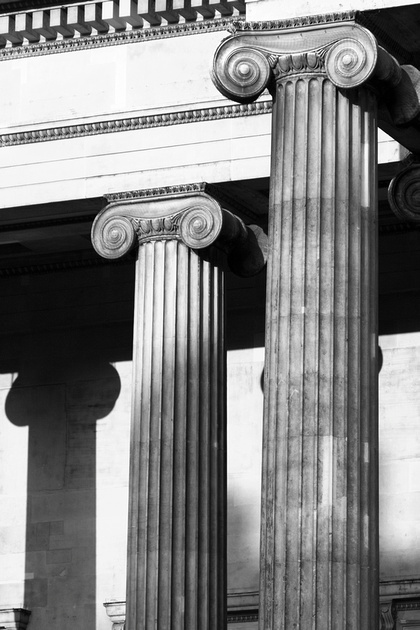 Sometimes shadows can help your composition even if they are not the main subject. Here at the British Museum they help in three ways. The side lighting emphasizes the fluting of the columns. The soffit shadow highlights the Ionic column capital in the sunlight. Finally the column's shadow gives me a row of three columns instead of two; our mind's usually like three of a kind much better than a pair, like a poker player. Here the shadow stands in for the third column. 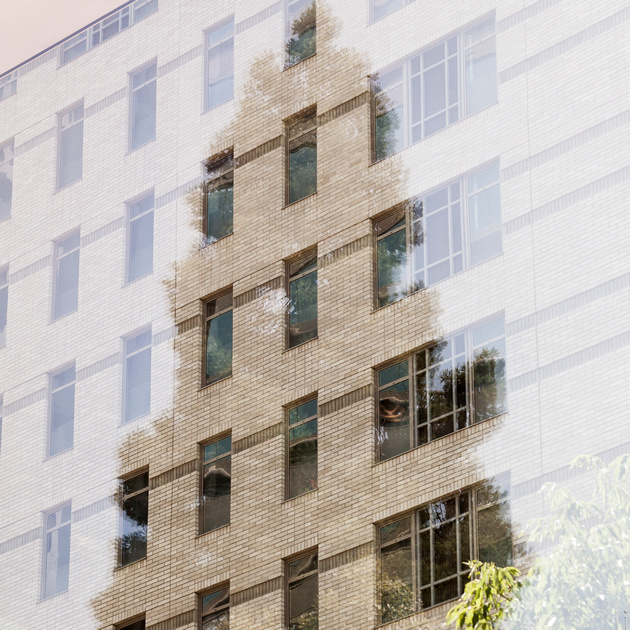 And finally we can play with shadows so much that we can confuse ourselves as much as our viewers. I will try to explain what's happening here, but don't worry if it doesn't make much sense, since it is pretty damn confusing. We are inside the Cathedral, which is what I call our Downtown Apple store. Thousands of dollars are literally being pushed into slots in the tabletops as adherents to our digital religion get their latest fix. I know it's a cult, but the stuff is beautiful, and more importantly, it actually works. As I contemplate the buzz, I notice this apparition in the huge end window wall of the store. It seems that I am looking at a reflection of a large tree superimposed on the window, shadowing the office tower across the street. I cannot see the tree out of the window, and when I go outside the shadow disappears. It's almost like I'm seeing the reflection of a shadow that isn't there. I now I'm beginning to blubber, but in the end I decided that I was seeing the memory of the old growth forest that the building replaced a mere 150 years ago. I'll stick with that explanation, Go have some fun with shadows.