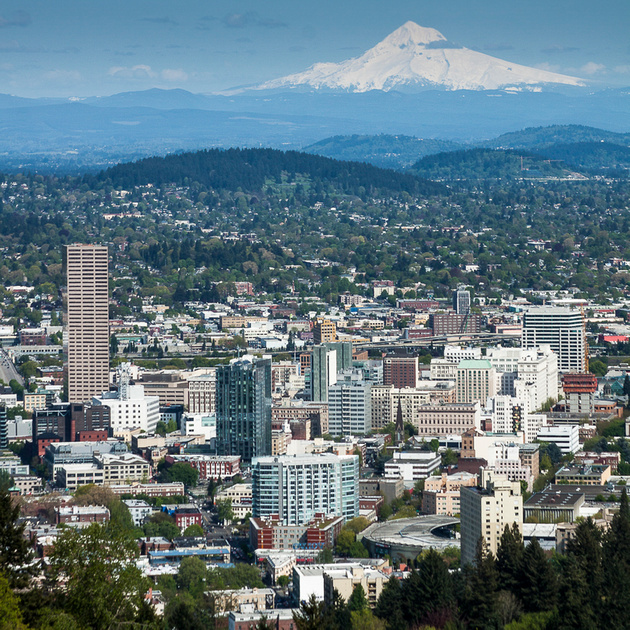 Today I would like to explore six images of basically the same scene, taken nine months apart over a couple of hours. Three of the images were taken at different parts of the day, while the other three are the result of post-processing. What is interesting to me is that they are all very different, even though they are the same, and that they show how patience on the photographer's part, and the investigation of various interpretations, can yield such different results.

On April 28, 2014, I finally took the time to head up to Pittock Mansion in Portland's West Hills to see what I could get out of a classic view of Portland. Pittock Mansion is preserved as the ultimate McMansion of its day, built on an estate at the top of the West Hills overlooking Downtown. The editor of the Oregonian, Mr. Pittock, conceived of the place as the symbol of his family's domination of the city; he managed to live only a short time after it was finished. You can tour the home, which is quite large but not overwhelming; the only thing I remember of the interior is the quite elaborate, ornate, and curiously clinical Master Bath. Lots of tile, some advanced bathroom contraptions, and all of the built-in cabinets were lifted off the floor to allow the servants to sweep and clean under them, which is echoed in the IKEA cabinets in my own remodeled bathroom.

But the interior of the mansion is not the point at all, for its site is the reason it exists. What's nice about the Portland Park that now encompasses the site is that the bluff overlooking Downtown does not even require an admission fee. You drive up Burnside, past 23rd, past the entrance to Washington Park , and just when you've begun to feel that the nice photographer at Saturday Market has totally led you astray you notice a very small sign on the right leading up a small hilly street past some pretty nice houses to a parking lot for the Mansion. It's open 9:00 AM to 9:00 PM, with some very strict warnings not to come too early and park on the street, or to stay too late since once the gates close you'll be leaving your car and walking a long way home. 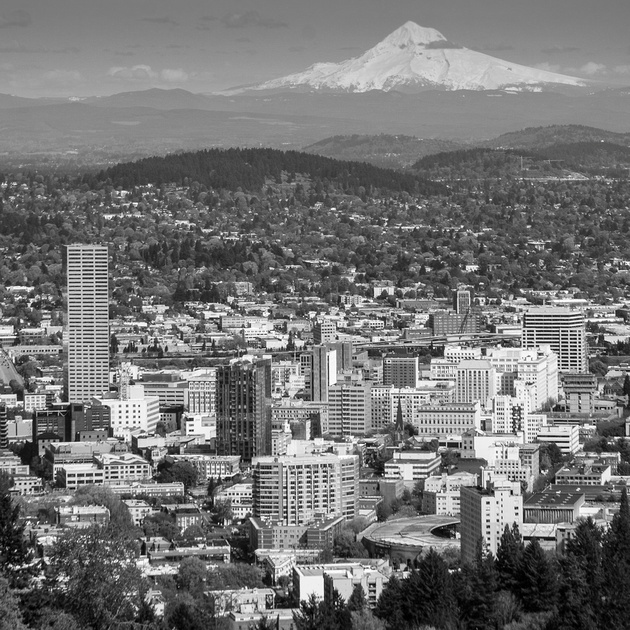 This classic view of Portland tells you a lot about the history and the sociology of our town. While you can't quite see the river, you can certainly notice the abrupt change in character between the two different banks of the Willamette, with the Downtown still defined by the river and the West Hills you are standing on. Height is a shorthand for social status - once the city grew past its first twenty blocks or so, and roads extended up into the hills, you wanted to enjoy the views down into the city so that you literally could keep an eye on your factory, your office building and your workers huddled on the flats below. The mountain was also a nice touch, on the days that it revealed itself. Portland became one of the rare cities in the world that really revealed itself from above - San Francisco and Hong Kong are similar - rather than from the Waterfront. In the days before aviation, much less drones, or very tall buildings, our natural topography allowed us to see our city as a jewel in the Wilderness.

My interpretation of this view was of course dependent on the square crop that fit my coasters. Unusual in a place where most try to show the entire city below, but there you go. The entire view is about four times as wide. I tried to summarize by including two of our icons, Big Pink on the left, isolated as in real life from most of our other skyscrapers out of the frame to to the right. And looming over all is Mt. Hood, seemingly just across the river and taking up at least a third of the horizon. Its size in my frame is due to the compression effects of my telephoto lens, which shrinks the actual sixty miles to the mountain. The square format worked for me because I like Big Pink, hate most of our other towers, and could get the mountain in the same frame. I hope you would agree that if the mountain isn't out, you might as well stay home; and that it pays to go before Summer, when global warming  reduces that snowy crown to dull gray.

Color versus black and white is a matter of taste. Obviously it's nice to have Big Pink pink, and to celebrate a rare blue sky, but black and white adds a sense of timelessness to the image, although most Portlanders will be able to tell the date by which buildings are ther and which are missing. The important thing to me is that black and white seems to allow for a closer inspection of each building without the cacaphony of colors confusing the issue. The snowy white mountain still stands out form the grey sky. 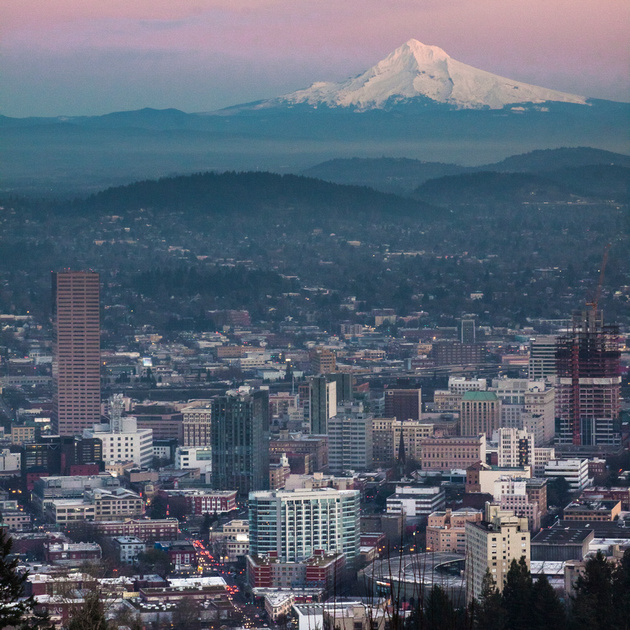 Six months later I returned to the scene of the crime to see if I could get something new. The only thing that had changed was that finally the Second Depression (excuse me, the Great Recession) was over, and that our new skyscraper was finally emerging on the far right. This site had languished as a four-story hole in the ground for five or so years, a local symbol of economic catastrophy that mirrored holes in big cities around the world. I seem to remember Chicago  leading the pack with an eight-story hole so overwhelming that it prompted a design competition to use it for something while we all awaited recovery. In any case Big Pink still takes up the left, and the mountain has again made the trip up Burnside worthwhile. February was even better than April, for it fit into my schedule as a "Gentleman Photographer." I leave sunrise shots to my younger colleagues, and if you want to get sunset shots  when it isn't cold you have park on the street and hop the fence, since the bluff is closed before Summer sunset. And don't get me started about snow scenes, since I will not risk my life or my car or put on chains to get up Burnside. It was interesting to experience the bell curve on the bluff that day. I arrived to the bluff at about 4:30 to find it pleasingly empty so as to allow me to set up my tripod at nearly the same spot as in April. The scene and the light were nearly the same, so I took a few shots in the daylight. I don't think I even bothered to process them because they were so similar to April. But as the minutes passed, the bluff filled up, with about two dozen others there to catch sunset. Now since we are facing East, this is not your classic sunset but it's Western counterpart, alpenglow. The setting sun lights up the Eastern sky into varying shades of pink, depending on the cloud cover and elevation - higher works better, hence the alpine derivation. And any real mountains in the scene will be lit up beautifully as well, since they are still catching the sunlight which is rapidly disappearing in the valleys below.

Sunset came, and despite my protests to the tourists that the real fun was just getting started, they all left for warmth and dinner and I was again alone I knew that "blue hour" was soon to commence, so I put on my gloves and waited for the usual best shot of the day. "Blue hour" is beloved by landscape photographers because of the special light of dusk which highlights sky colors in camera long after our eyes say its dark. Now of course you need a tripod, because it actually is pretty dark, and you can't handhold a camera for a several second exposure. Urban photographers like me are even more enamored of "blue hour" since that's when the lights of the city come on. The skyline looks its best lit up before the sky goes pitch black, and the contrast becomes very problematic. 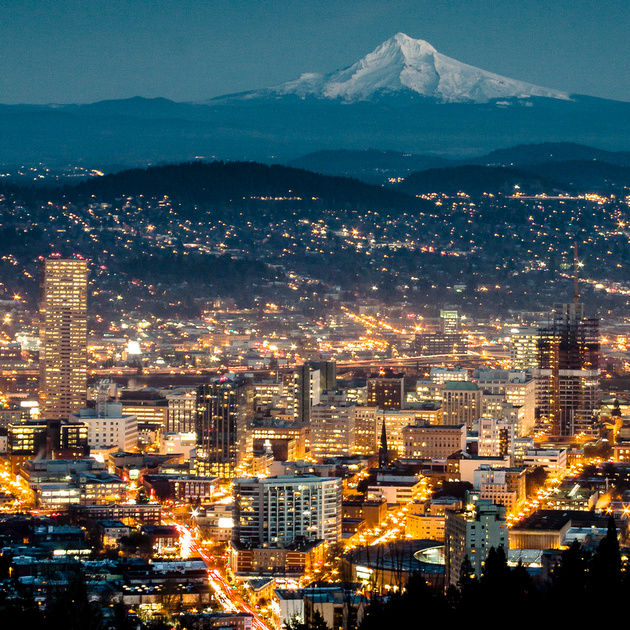 This is "blue hour"; the lights have come on, you see rush hour snaking down Burnside, Mt. Tabor Park on the East side has become the first dark hill on the way to Mt. Hood. And the mountain looks glorious, because the sun is still lighting it up against a dark blue sky. My batteries soon ran out, but the cold was telling me it was time to go home. This is the most popular version of the image with my customers.

I couldn't resist converting this view into a black and white version, despite the beautiful colors of the original. Black and White seems to heighten the dramatic contrast between the city and its natural surroundings. The Mountain glows in the distance, and the pitch black foreground contrasts with the dark grey of the sky. The mood is deeply "Noir", and I feel there is more danger than glamour present in the city below. I like this one the best.

A few years later I created a series of images that I called "Portland Icons", in which I imagined iconic Portland scenes against a gold leaf background. My experiments with real gold leaf are still unsuccessful and ongoing, but I have developed several digital versions. 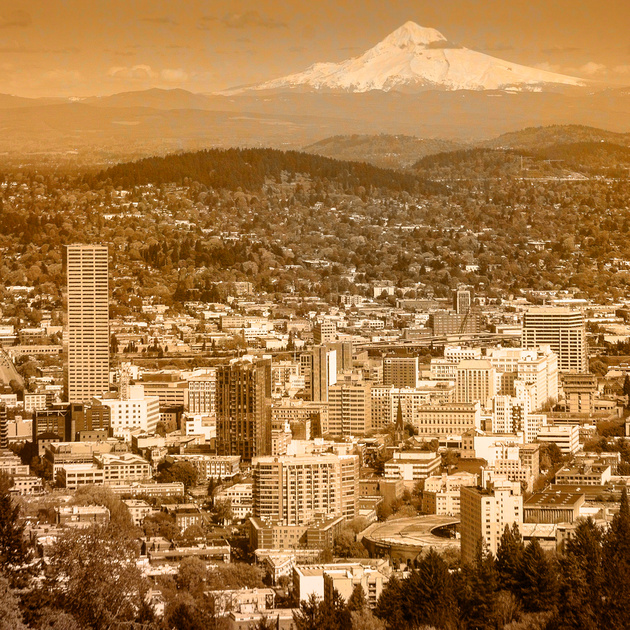 I've used the graphic quality of this image to allow me to tone it gold without losing all sense of reality. The daylight black and white is placed as a layer above a gold layer, and the composite replaces all the greys with variations of gold.

That's about it, but I wanted to say something about "Stumptown" which was probably our city's first nickname, coined by derisive visitors soon after Pettygrove and Lovejoy flipped  coin and settled on "Portland." You see that the city that they had platted out in the wilderness was in reality an old-growth forest, with Douglas Firs so large that you could cut them down, but not easily remove the stumps. One of the first laws enacted required that the stumps left on your homestead had to be painted white so that you and all your fellow drunks would not hurt yourself stumbling around after dark. That left a sardonic journalist  to nickname the resulting young city by the river "Stumptown." If they could only see it now.