IT'S ALL THERE IN BLACK AND WHITE Today I'd like to discuss my love of monochromatic imagery, usually referred to as Black and White. While I am not a black and white purist I have increasingly seen the value of this kind of abstraction in some of my imagery. I think as you experiment in converting some of your images into black and white you will also see its value beyond nostalgia.

The image above is nostalgic, in that it was taken about fifteen years ago on a vacation trip to the Cascade Lakes area in Central Oregon. I forget which lake we stayed at, but there were cabins for glamping (an unknown term back then) and boats to rent. I recently purchased a scanner to resurrect some of my old prints and negatives for use in my latest photo book project concentrating on my imagery all over the state of Oregon. I scanned the old print, corrected for some color shifts, and cropped to the square which I thought was best for the image. Here is the color version. This is on example of one of the reasons I sometimes choose to go black and white - I simply hate the colors. I don't make any apologies for this, and have used this excuse even for landmarks that have beloved colors (by most people) that I happen to find unattractive, like the St. Johns Bridge, for heaven's sake. I tried to like the original, and semi-believed Lightroom's assurances that I had achieved the correct color balance, but those green boats just didn't do it for me. I find the black and white version much more calming, and don't miss the dock, which we all know is wood anyway.

Sometimes I'm confronted by what is actually a monochromatic color scene, and will almost immediately try a black and white conversion because I don't think there will be much of a difference - I didn't take the image because of the color. This image is in color, but it was such a blue day that it almost appears monochromatic. 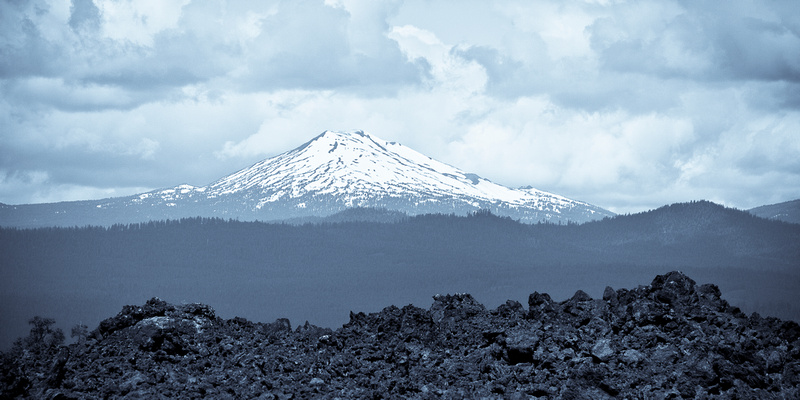 I  tried a monochromatic with a blue tint, which is reminiscent of the protective toning we used to do in the early days in the darkroom. You can see it only really lightens the bright blue parts of the sky, and tints the rocks blue. It somehow still looks a little more realistic than the real color photo. 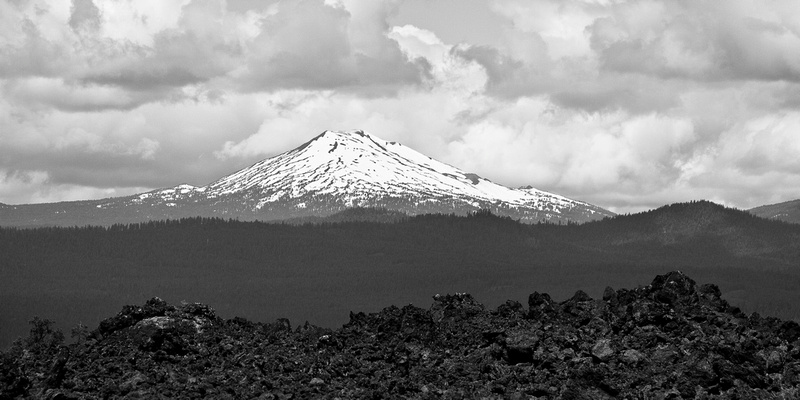 Yet I prefer the straight black and white, which highlights both the clouds and the volcanic rock in the foreground without any color to get in the way. This version is much more satisfying to me, especially the snow on the mountain.

Sometimes the different versions are more of a matter of taste, or will feel better when placed in a collection of other color or black and white images. 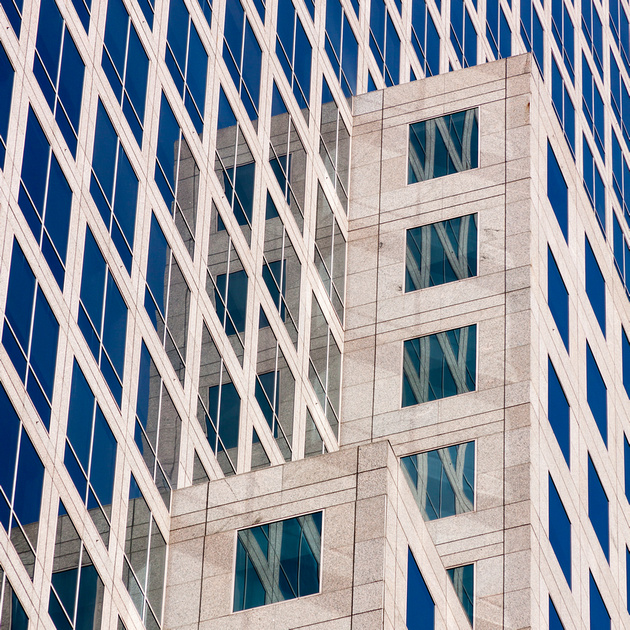 REFLECTIONS ON A GRID : FINAL VERSION As the cops would say, "nothing to see here people, move along." Maybe the reflection is stronger in the color version, but the black windows seem more relentless in the black and white. They are very similar images, although if I didn't like the blue or the tan I would not hesitate to go with monochrome. Sometimes the choice is obvious, at least to me, but I don't go looking for black and white out in the field. Modern cameras will allow you to shoot in both jpeg and raw at the same time - memory is now cheap, so I would try it. On the back of the camera, you're looking at a black and white scene, so you "know what it looks like in black and white" but the raw file is always a color file, so you have a choice later to go back to color. In any case you should never shoot in your camera's "black and white mode" alone, since I can guarantee you that you and your computer can post-process a better black and white than the incompetent computer in your camera. 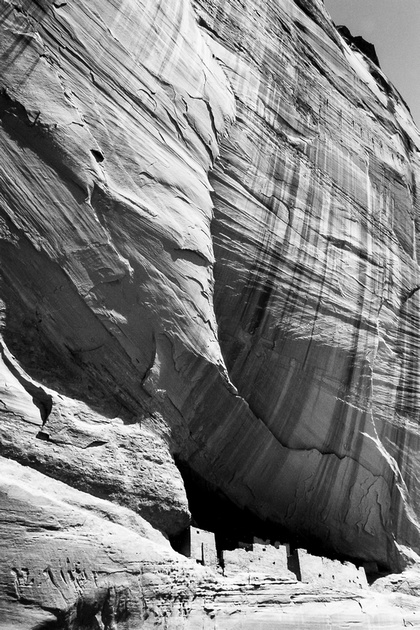 This is closer, but I still prefer the black and white. Maybe you are a real fan of red rocks, but I think the contrast of the sunny ruin and the dark cave is better expressed in the monochrome than in what is really a monochrome brown of the color version. It would be even closer in a square crop, because that would eliminate the distracting blue sky that the black and white avoids. 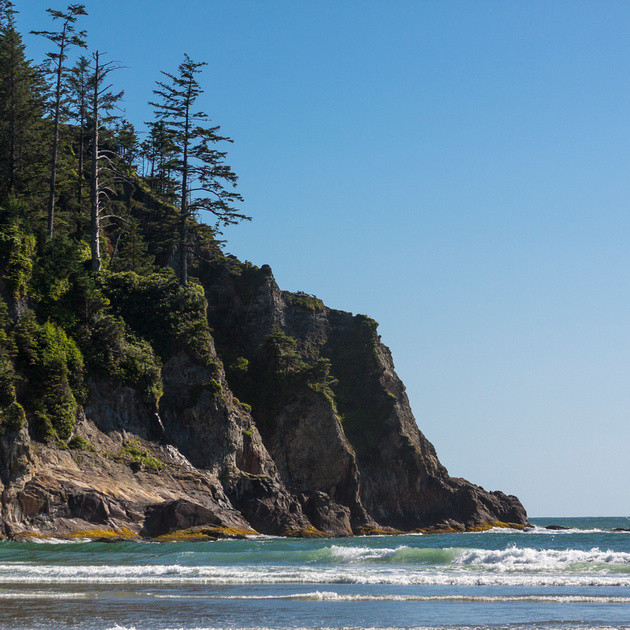 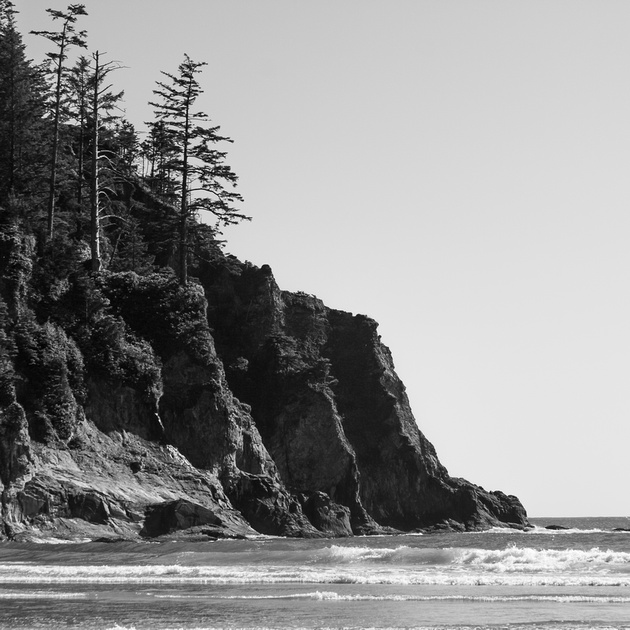 This comparison brings up other issues. Which is more realistic? Yes, we lose the green trees, but we gain more definition in the cliffs in the monochrome. And really , do you actually believe that perfect blue sky - does that scream Oregon Coast? The color postcard view somehow hides the real feel of the coast, even on such a nice day. I only had to clone out one lone surfer in a wet suit to reveal the "truth" of how cold both the blue or the grey water was on that day. And now you can't tell whether it's 1872 or 2002 - the scene is exactly the same. 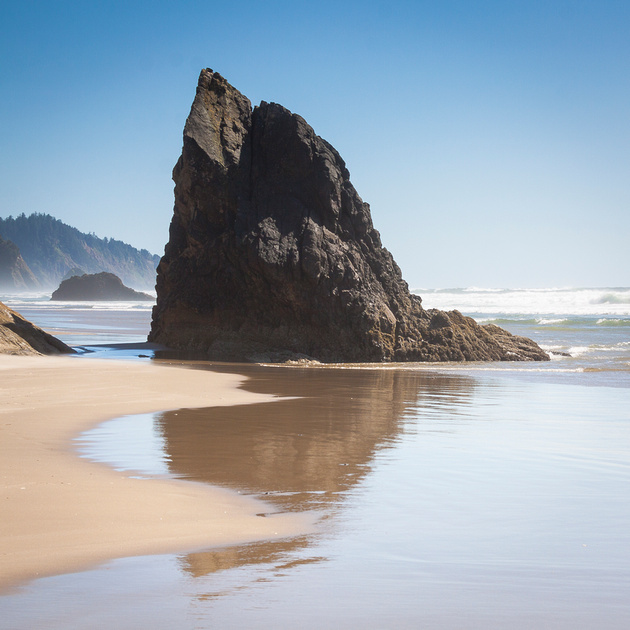 Now we have achieved what I believe is equilibrium, with both versions having different charms. The color version's sand is more evocative than the monochrome beach, and the color reflection is a little stronger. The monochrome's rocks are a little better defined, especially the background rock and cliff. But the tan sand and blue skies are nice complementary colors. To each his own. 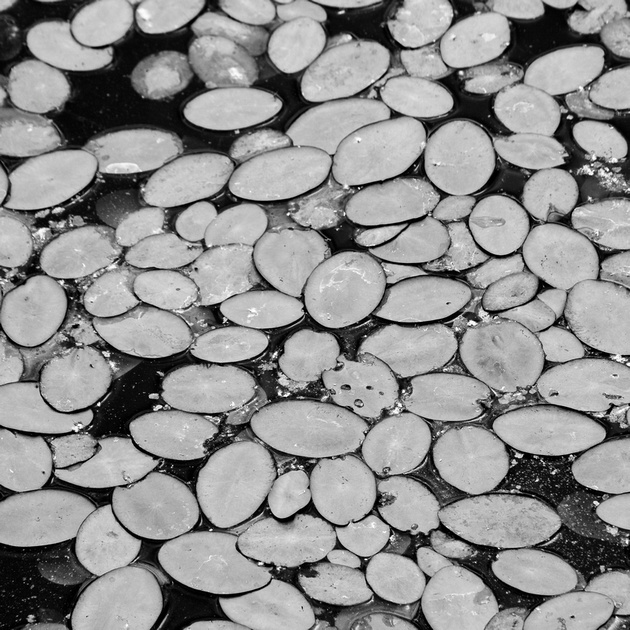 While I can make the water more realistically dark in the monochrome, I still think I'm losing too much of the sparkle of the the color, even though I think the image is all about the pattern, not the color. The image is already abstract enough in real life to go even more abstract in monochrome.

So, to summarize, be open to trying black and white, after the fact. There is nothing magic about "seeing" in black and white. That's one of the ways we can take advantage of the miracle of digital post-processing. There are so many different kinds of papers now that I'm really beginning to think that darkroom afficianados are approaching the obscurity of the absolute sound fanatics with their analog turntables. I know that the digital darkroom gives me much more control than I ever had over my images when I manipulated chemicals in the darkroom, and now I do not have to choose black and white film.

In fact, I think that the only time you have to "think in black and white"  is when you are confronted with "dull light" or even "bad light" - these inopportune  moments in mid-day during your trip to Paris are perfect for black and white, and you can shoot away, knowing that yes, the scene might end up in monochrome anyway. You are simply looking for contrast in any case, and as we've seen, both color and black and white have their place. 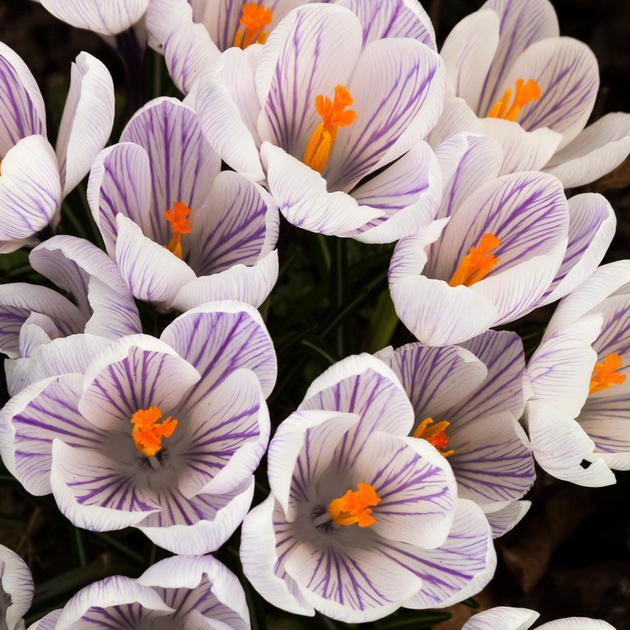 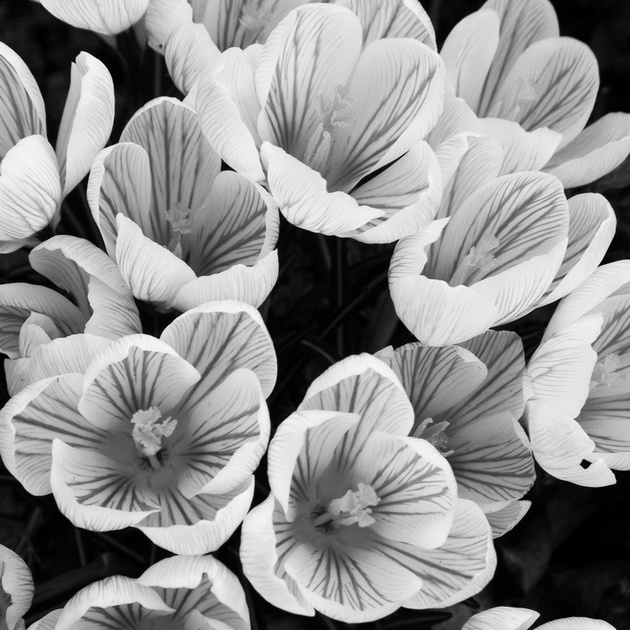 Am I supposed to pretend that I didn't see those beautiful flowers, in all their colorful glory? But am I unaware of the even more powerful contrast, still realistic, that I can achieve in black and white, which defines the shape and pattern while losing those orange stamens? After all, I'm only human, not a pollen-hunting insect. It sometimes come down to "Keep it Simple Stupid." Is this a fashion shot? Do we really care how many colors of shirts and pants there are here?  Black and White is perfectly capable of showing how many different races there are at this crosswalk. And all of those white men in their dark suits all look better in black and white too. We know the cab is yellow, we weren't born yesterday. And we know without seeing it that the light is most likely red, and that there is strength in numbers, especially when you are jaywalking. Black and white allows us to focus on the important issues, like the fact that all of these people have never heard of Covid. PLEASE PEOPLE, GET YOUR SHOT. PLEASE.