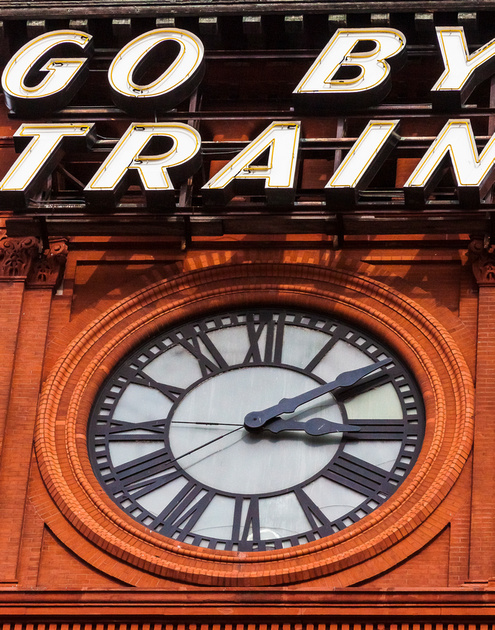 This week's essay will be a peak under the hood of an artistic trick which I have picked up in my work after observations of artists far better and more celebrated than yours truly. I have found that it invariably works, and the more casually and unobtrusively it is applied, the better. I am referring to the inclusion of the printed word in a visual image. What is interesting is that these words, letters, or numbers do not have to have any relevance to the "subject" at hand. While the inclusion of signs in urban landscapes has a long tradition, it soon became apparent to me that these letters did not have to be complete, make any real sense, or even be in a language I understood. I was just drawn to them, seemingly against my will - attention must be paid! 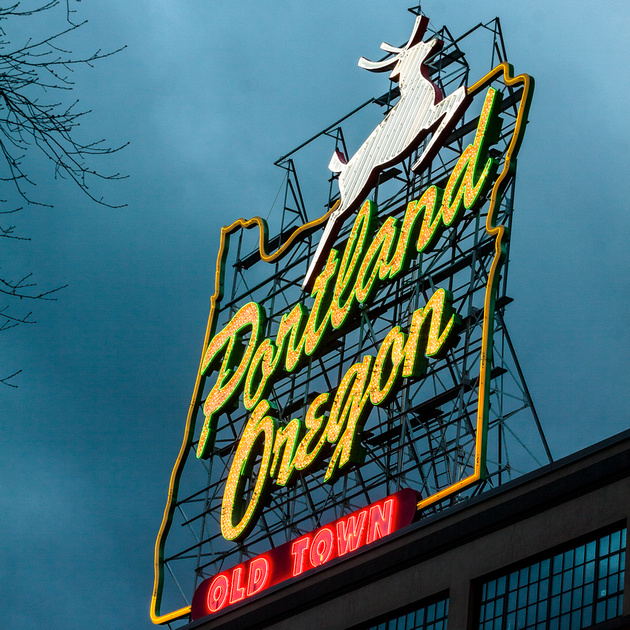 Here is an early and obvious example, a famous sign in town which is the subject of almost any visitor with a camera. While I can take pride in my framing, the angle, and my capture at "blue hour", when the neon comes on but the sky is still blue, it is really not that much different or better an image than any competent  tourist can take with their iPhone. Yet the image works as well as the actual sign in the landscape - you must read it. 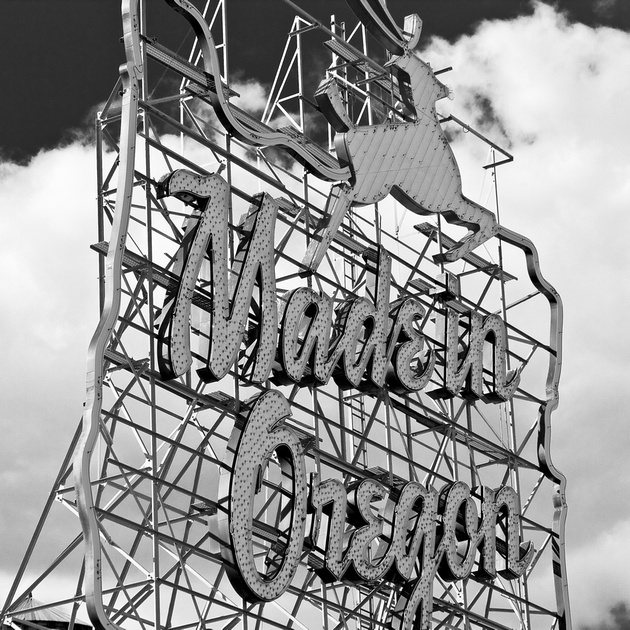 MADE IN OREGON B&W : FINAL VERSION

Now we're getting a little more complicated. The abstraction of black and white has relieved a little of the postcard problem, as has the fact that we are now dealing with an historic sign, the predecessor of the existing Portland sign. Tourists will only be confused, while Portlanders will nod their heads in sentimental recognition and show me their tattoos in places which I really shouldn't see. So now the act of reading has become a pleasurable act of nostalgia. 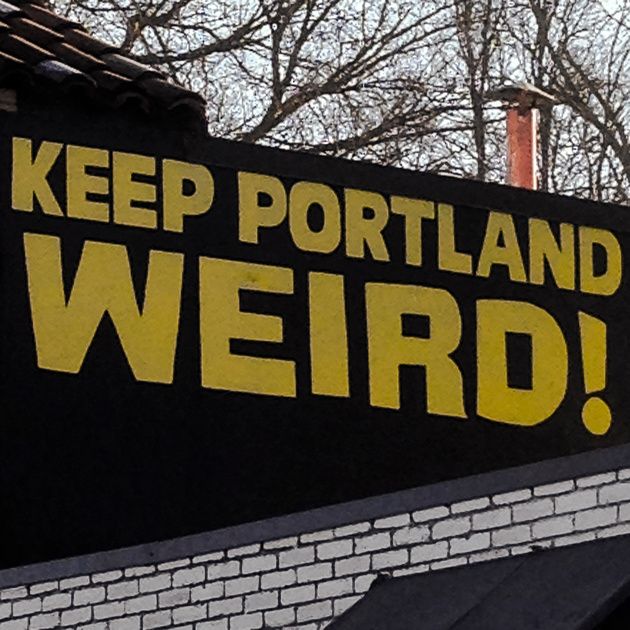 Another example of the power of a sign, our informal motto. The only selling point of my version is that I found the smaller East side version at Music Millennium and then as is my practice, cropped it within an inch of its life. The sign is now so out of context that I have created a photographic bumper sticker, with only limited hints that it actually exists, or that it really appears in this manner only in my photograph. 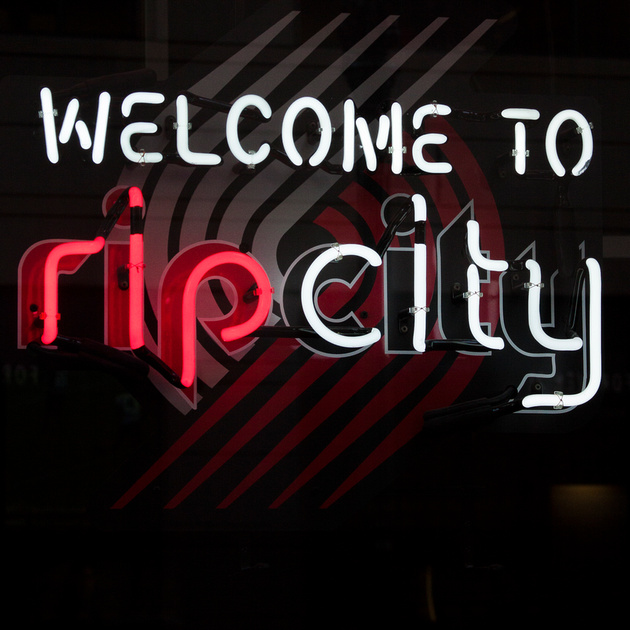 Early urban photographers realized the visual power of the neon sign, especially once they got over the problem of proper exposure and just let everything else go black, with limited information concerning the signs' actual location. This example celebrates the neon technology, ignoring the context, which happens to be a local bar window, and excluding the beer brand which is trying to show its loyalty to the Blazers. I am as usual finding myself appealing to locals, for the tourists are in fact totally confused, worried that we all are really the nihilists they have been warned about. 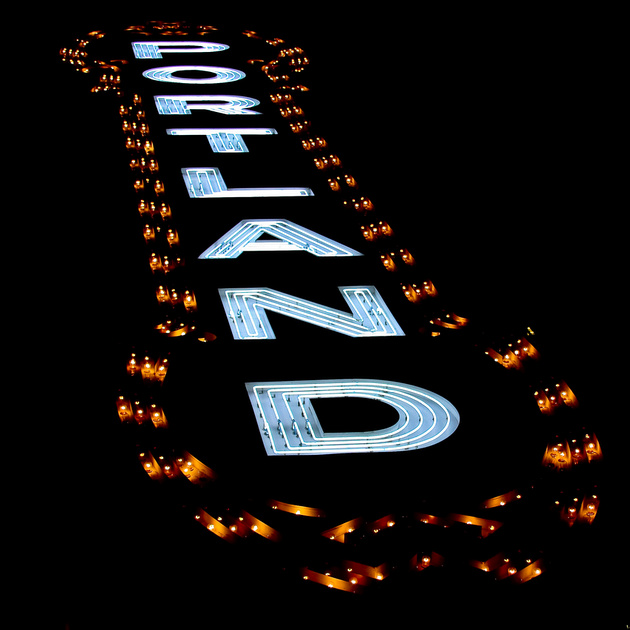 This is about as simple as it gets, and the only pride I can take is my exposure which carefully darkens everything else so that the sign hovers in complete blackness, devoid of any acknowledgement of its surroundings or in fact its existence as a physical object. My jaunty angle is the result of the need to get my subject in a square coaster, but it is interesting to me that I have never seen another image of this ubiquitous sign at this angle. 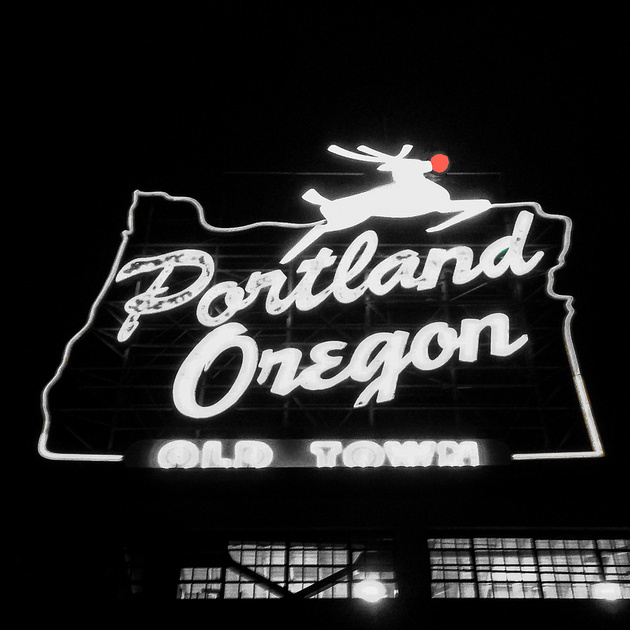 Another take on the Portland sign, again reducing the exposure so that the neon is disembodied from the warehouse it is attached to. Probably only locals will realize that is the holiday season, when our white stag becomes Rudolph every year. 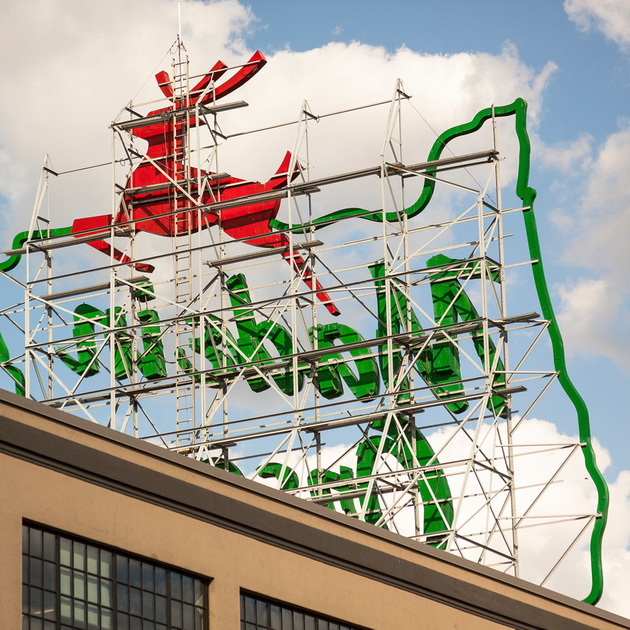 MADE IN OREGON OBVERSE : FINAL VERSION

A little more sophisticated, or just too clever by half? The power of the letters, and the stag, can survive even though they are now backwards. Of course it helps that everyone knows what the sign actually says.

So far we have seen how I use the power of print to grab the viewers attention, and subtly include them in the sanctum of shared reference points so they can feel part of the "background" meaning of the image. This is why the Union Station shot focused so closely on the side of the clock tower that does not say Union Station. Locals are included in the "club" because they have seen the plaintive plea to try the train for as long as they have been in Portland. And  my very tight framing shows the viewer that the only important thing about the clock tower is that neon plea, and that they might have just missed their train. If this image is enlarged to a size to rival reality, it will always be ten after three wherever it is displayed. Like print, clocks always get our attention; have you ever noticed that every clock or watch advertisement always shows the time as 10 after 10 because someone decided that that position of the clock hands was the most aesthetically pleasing? Or that the concerned atomic scientists knew we would respond to a few minutes before midnight? 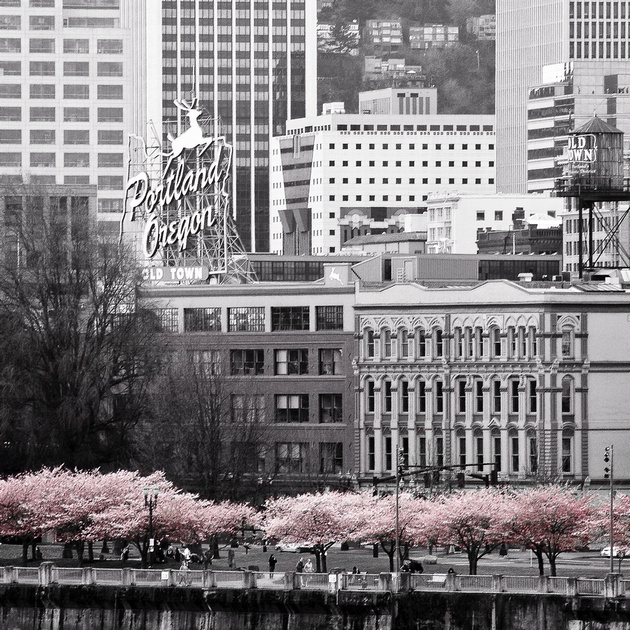 IN THE PINK : FINAL VERSION

Such is the power of lettering in the visual field that I can color the cherry blossoms and reduce the sign to a tiny fraction of the image, and still your eyes must read the sign despite the visual cacophony. Black and white actually makes the sign much more readable in this image.

Now it's one thing to take pictures of signs - can we show even more how these letters grab our attention? Scientists have long known that our brains are wired in certain ways to pay more attention to certain things in our visual fields. Viewers will always focus first on the lightest portion of an image, so it better be important or it will just distract the viewer. That is why some of the most successful images of the forest always try to avoid showing the sky, since it is so much lighter than the woods, and will take the viewer "out" of the picture. Human beings also will latch on to any representation of a human face, whether it's their mother or not, which human babies recognize even before their own bodies. And once we learn to read, or even recognize letters as symbols that are theoretically important, we are drawn to them like moths to a flame. Artists take advantage of this fact.

I'm an architect, so an old brick warehouse in the Pearl District will probably appeal to me as an aesthetic object more than the next person. But I can try to seal the deal by including some faded letters into the equation. It doesn't matter that some younger folks might not even know what crockery is, and that glassware or whatever is just the product of your crazy brain trying to complete the word. I fooled you once again.

Frank Lloyd Wright labeled his building, perhaps with the hope that New Yorker's would not think that a spaceship had landed on Fifth Avenue. Notice how he has spaced the letters so far apart that he is almost fighting legibility, yet you can't look away from that small part of the image. 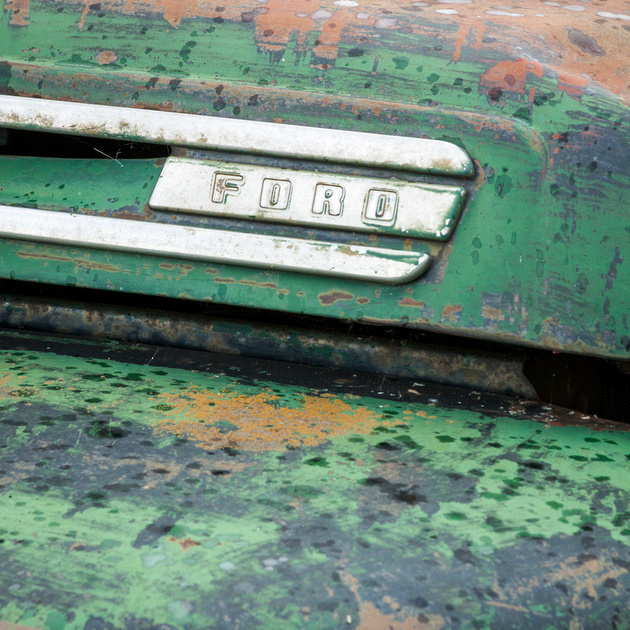 The subject of my image is the incredible pattern and colors of the rust on this old truck, but you know what caught your attention despite yourself, even if you are a Chevy man. Why do you think they put labels on cars anyway? 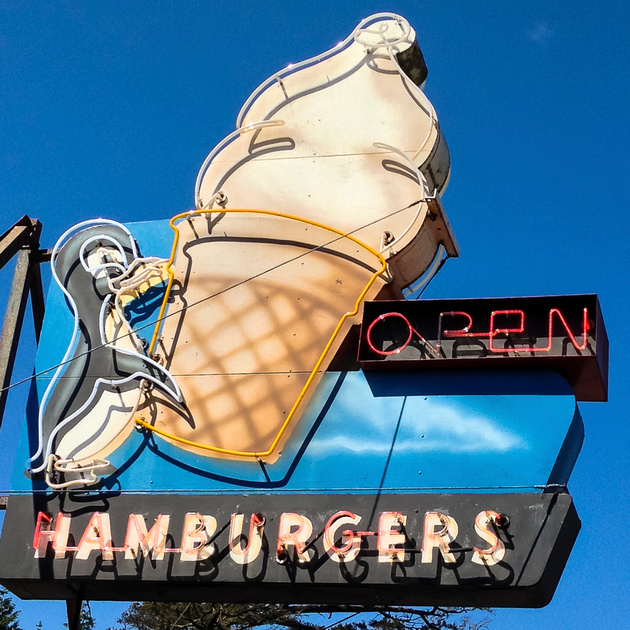 Such is the power of print that even sign makers can get confused. What are they actually selling at this roadside stand? Ice cream or hamburgers? And what's with the penguin? This sign reminds me of the joke about the husband who gets in a pickle when his wife asks for the pink shirt in the dryer that is blue, but is labeled "Pink" by the brand. What's a poor male supposed to do? 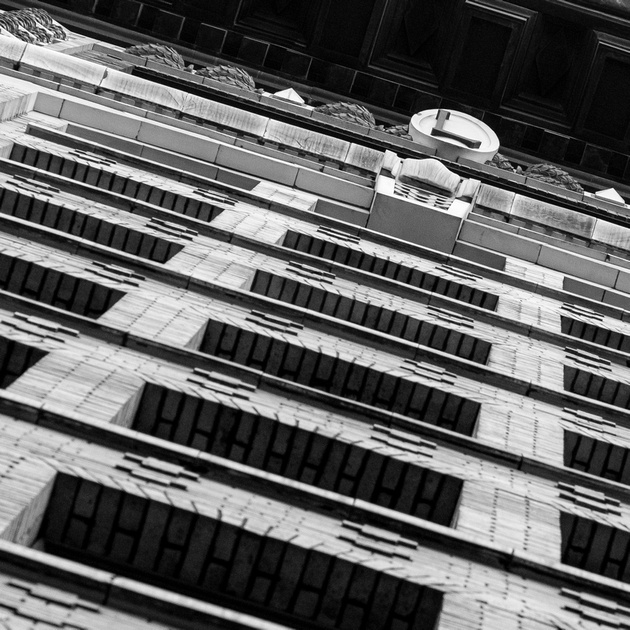 UNDER THE "L" : FINAL VERSION

Letters are in fact so powerful that you sometimes need only one to completely draw the viewers attention. Portlanders might recognize this vintage skyscraper as the Wells Fargo Building in Downtown, even though Vanna has only revealed a single "L". 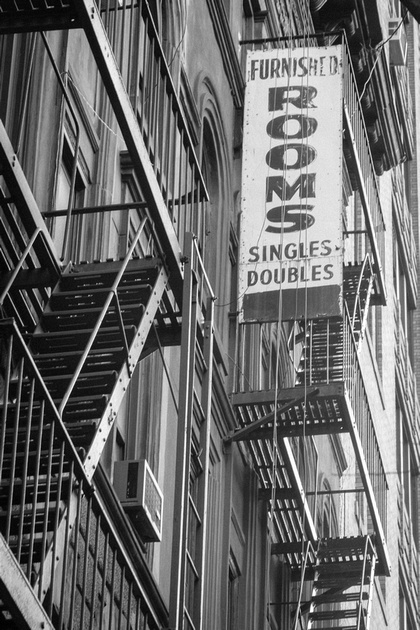 Walking the mean streets of my native New York, I have brought the socioeconomics of the city right smack in your face. You think this ancient SRO sign is only a memory, but you're not so sure, and that "double" is even weirder, as are the multiple fire escapes - does this building even have hallways? 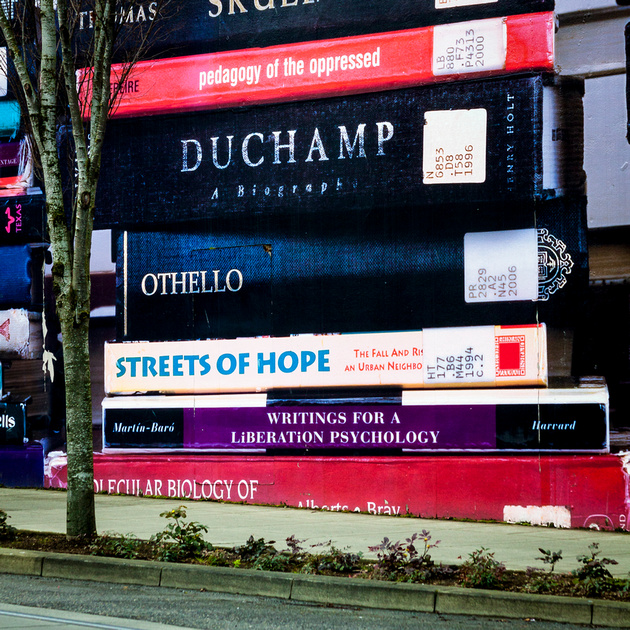 Of course i was a complete sucker for this "tromp l'oeil" (fool the eye) painting on the side of a warehouse near the Portland State library, but it is interesting to me that this viewer (me) was drawn to the most optimistic title of this pile of books. 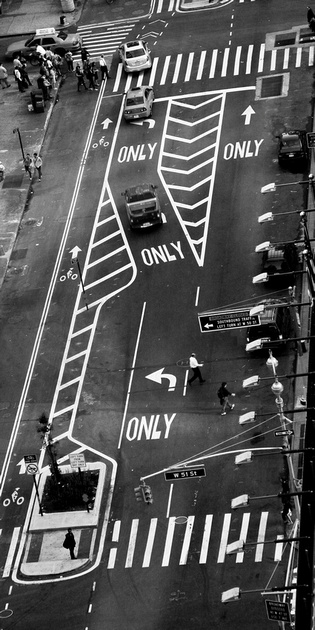 IF ONLY : FINAL VERSION

This street scene, which I viewed from forty floors up in my sister's New York office, seemed to exemplify an urban angst so confining that even contradictions were proscribed, the relentless march of the street lamps seemingly out of touch with the roadway's instructions to toe the line. 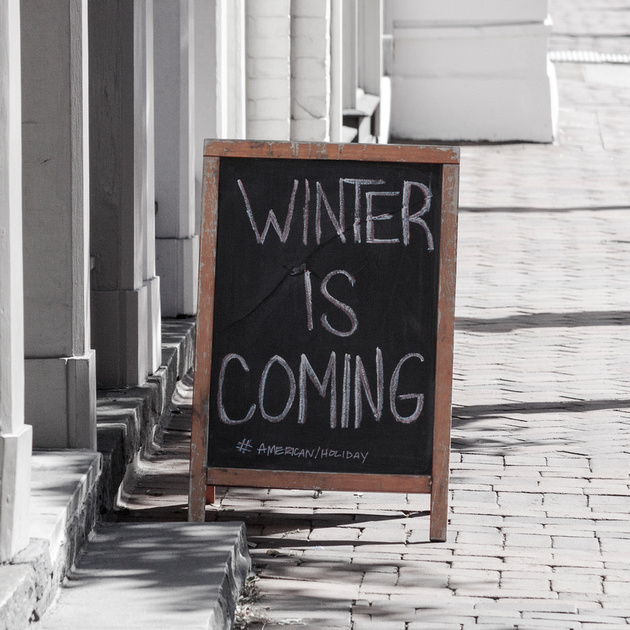 Sometimes we can read the words, know the inspiration, without even understanding what the hell these words to the wise are all about. Is this just the mood of Washington, D.C., or a grim reminder that the daily specials really don't matter in the big scheme of things? 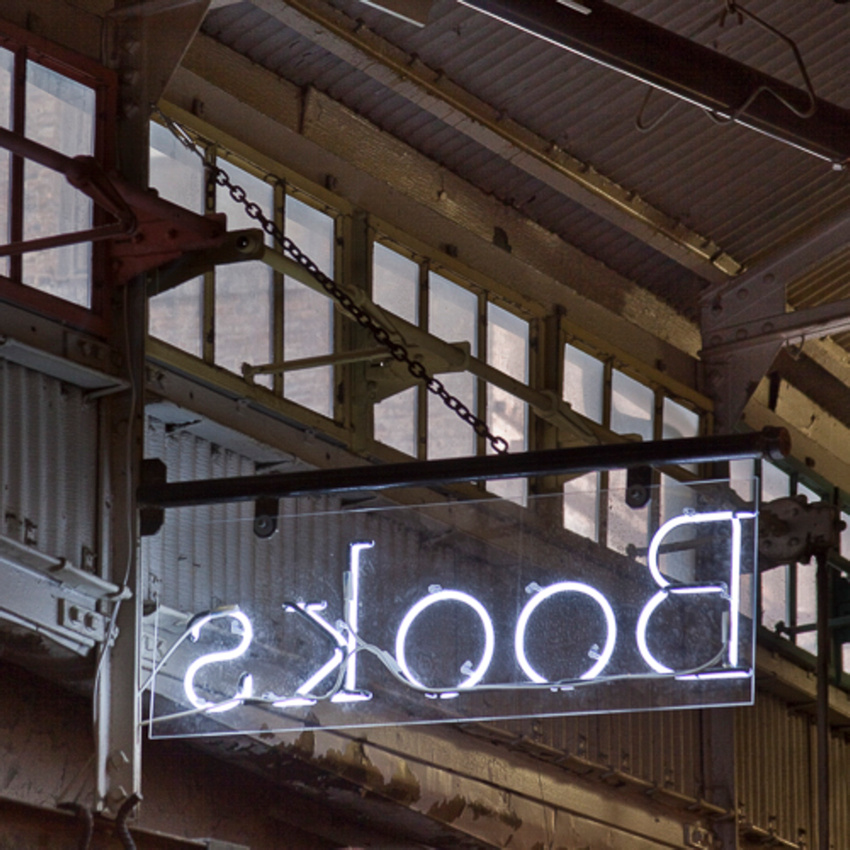 Maybe it wasn't such a good idea to place a neon sign on a clear plexiglass background? Or is the joke really on me, and the prospective customers of this bookshop, who can't resist the lure of the printed word, even when it is backwards? 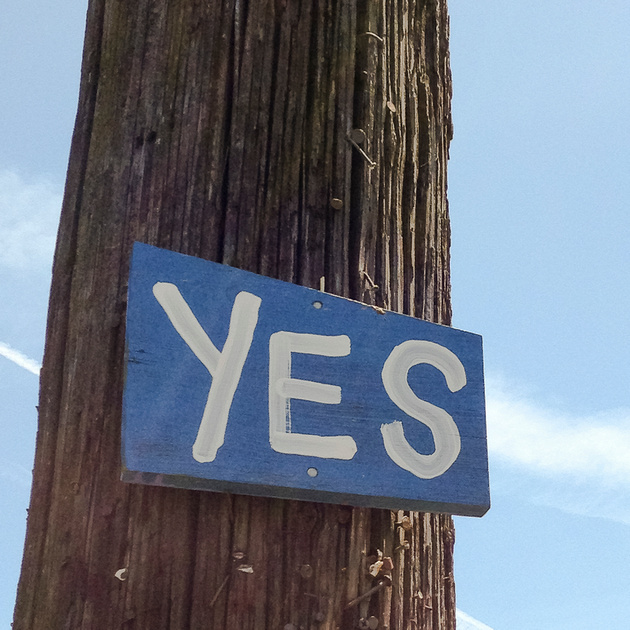 I'll end this review of the power of words in imagery with this enigmatic image near my house. And to think that some people think that Portland is not really that weird after all. What are we to make of this one-word declaration on the side of an innocent telephone pole? Who's asking? What are we signing up for? And why am I supposed to understand this at all? But consider how depressing the alternative would be as we walked by on our street?