IN THE STILL OF THE NIGHT 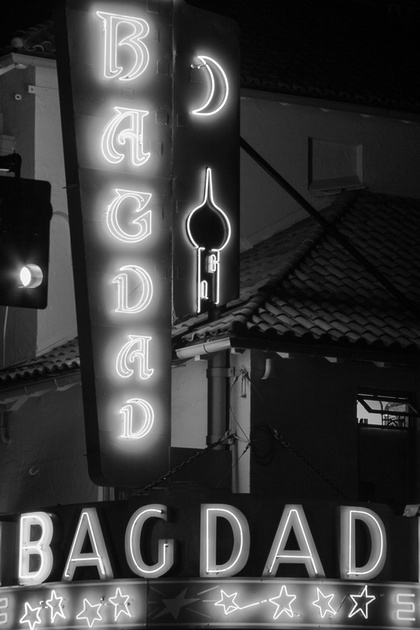 Its been said at least a million times that photography is all about light -good light, bad light, light painting, natural light, artificial light - but what about photography under the conditions of little or no light? What about taking photographs when we ordinarily wouldn't consider it - under the cover of night? From the dawn of photographic history, photographers have tried to extend the time and lighting conditions that allowed them to create images after the sun went down. 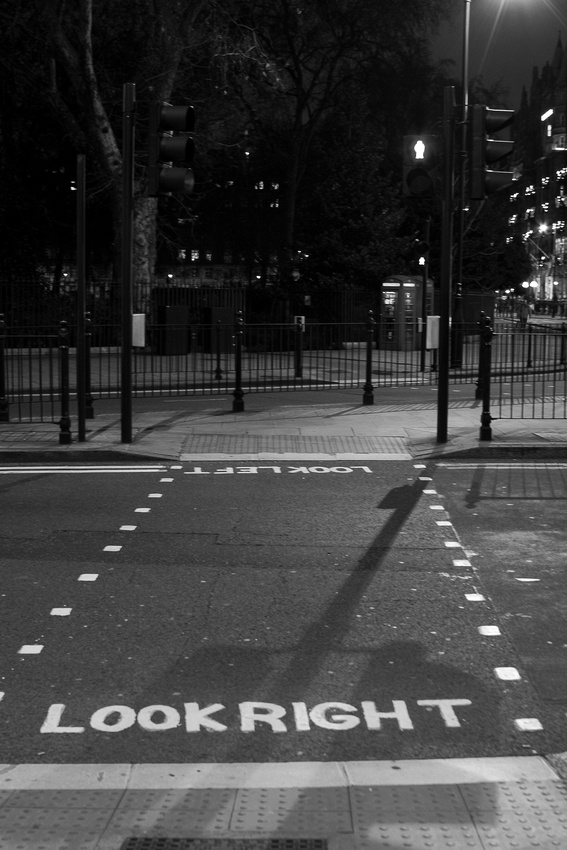 There are several problems with taking photos with little or no light. Focusing the image can be a problem, where the absence of contrast makes it hard to find the edges that are necessary for properly resolving focus, whether manually or with autofocus. Low light levels frequently require shutter speeds slow enough to either blur moving subjects, or even worse, to reveal camera shake caused by our own failure to hold the camera steady for longer than we usually do when hitting the shutter button. Finally, even successfully taken low-light photographs can suffer either from a general murkiness, or from excessive contrast between light and dark areas of the image. Either circumstance will lead to the absence of the detail in the shadows that we were after in the first place. 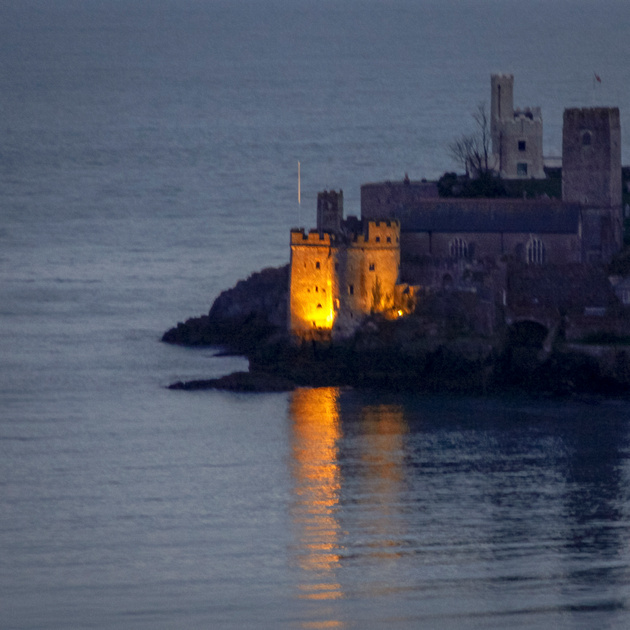 My readers know that I am a fan of high contrast images, so that night-time contrast does not scare me off. But we still have to deal with it, either by raising our ISO sensor levels and introducing more noise into our images, or bringing along our annoying tripods to eliminate camera shake by allowing the slow shutter speeds that our hands will not allow. But we also have to deal with the differences between our eye/brain connection and the different way our cameras can register light, especially when it is darker than daylight. Our eyes can perceive many more light levels in the low tones than our camera sensors can, and our brains are better able to deal with the idea that highlights, especially artificial light, are expected to be very bright. Our sensors respond in several different ways. In an effort to not blow out the highlights, they reduce the exposure of the darker areas to just black. Conversely, and even more weirdly, in an effort to render the world in our average 18% gray, the images can sometimes appear not to be taken at night at all. 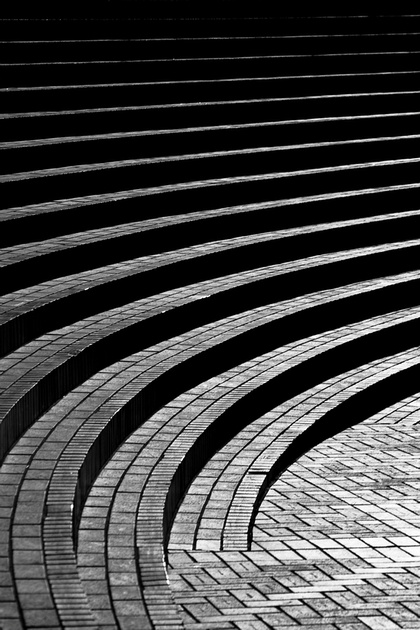 So we find ourselves in the quandary of fooling both our cameras and ourselves, which makes these night-time sessions problematic. I have found that the only real answer is to increase the experimental quotient, with lower expectations than under ordinary conditions. This is also usually a solitary activity, since the spouse doesn't even understand what you are doing out there, and the shutter speeds that sometimes exceed minutes will render them speechless. Urban night-time photography introduces the realistic concern of being out in the dark alone with thousands of dollars of equipment. I have found the answer in making it a winter activity, since at least night is earlier, and there are more people around. Of course you have to be more social, since the public is naturally interested in your idiosyncratic activity, and it is cold. But cold and jovial are much better than warm and paranoid. The image above was taken at a photo meet-up with dozens of photographers spending an hour milling around Pioneer Courthouse Square. 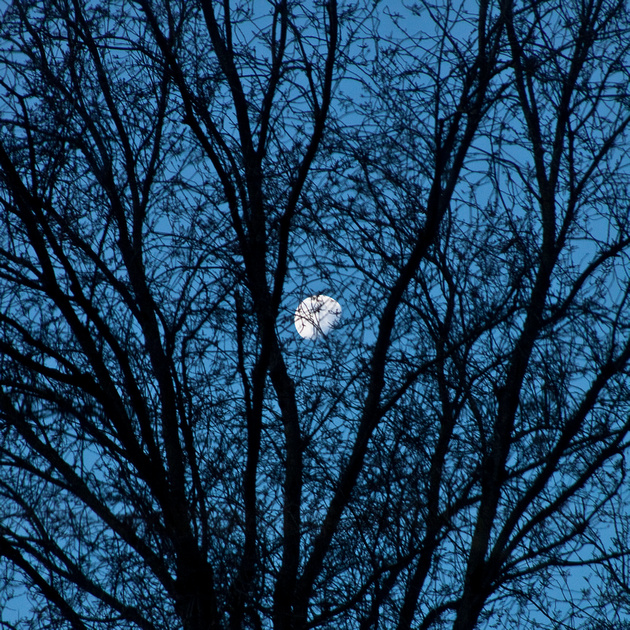 Urban landscapes lend themselves to night-time shooting because of the miracle of artificial light. While modern cameras can shoot at candlelight, or by a campfire, it was the introduction of electric light early on in the history of photography that allowed enough ambient light to light urban areas, even without focusing on the light sources themselves. Urban areas were suddenly not so dark as humans had come to accept, even if we were a long way from worrying about "light pollution."  The photo above, although labeled "Twilight" to take advantage of young vampire afficianados, was really taken at the end of what photographers call "blue hour", that magical period, usually about an hour at least in our geographical position, where the sun has gone done, but the sky is not yet black, and Mr. Edison has turned on the lights in the city. I'm depending on the ancient source of night-time light, the full moon, to provide a focus point through the trees. The camera has rendered the sky a lot lighter than reality, so I am really relying on the street lights to allow me to see my camera and not trip over the curb. 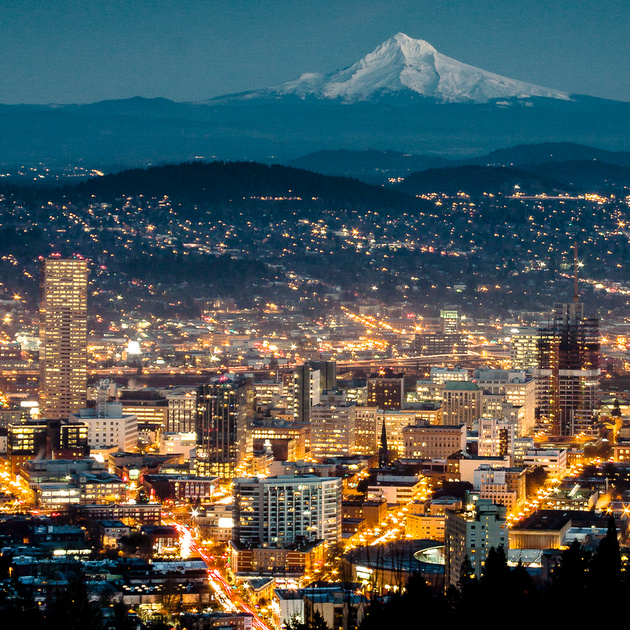 Another example of "blue hour". All of the tourists have left for dinner after sunset, and it's pretty cold, but at least since it is February it's only about 6:00 P.M. The sun is still lighting up Mt. Hood's snow, since there is no light out there, and the camera reveals all of the varied shades of artificial city lights that our brains do a better job of averaging. 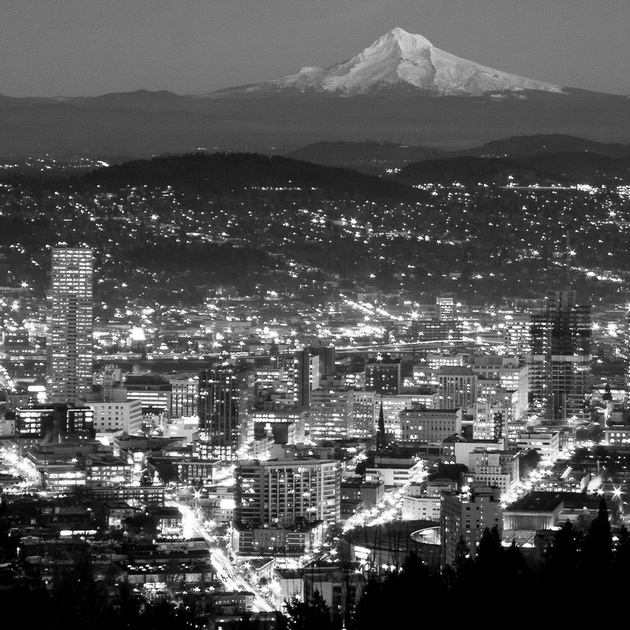 This alternate interpretation shows how our brains can be fooled by the photographic process. The black and white rendering has not only increased the contrast, and created a new moodier photo, but it has also convinced us that it is later in the evening; black and white has fooled our brains that it must be later because our "eyes" can no longer perceive color. As the sun goes down, we lose our ability to see colors far earlier than we lose our ability to differentiate between darker levels of light - this is masked by the brightness of artificial light, especially neon signs. 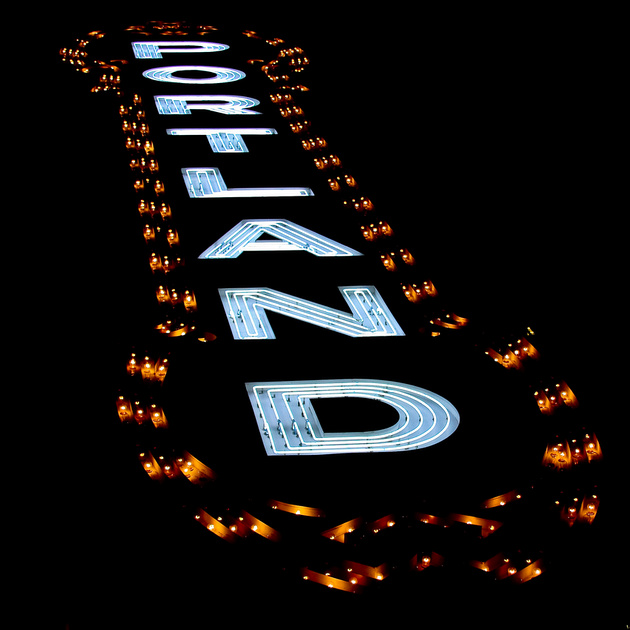 Yet sometimes the camera's eyes can reveal more than our own, because the primitive computer brain cannot adjust to reality as readily as our own. My exposure of this neon sign is so heavily based on the artificial lighting that beyond throwing everything else into blackness (there is a city behind the sign) our eyes can now perceive the actual structure and blue shade of the neon letters, which I assure you is not the reality of the sign's appearance. 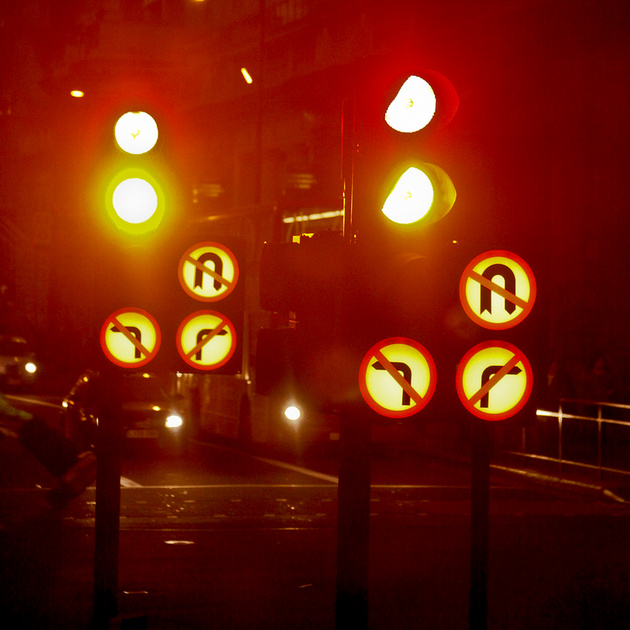 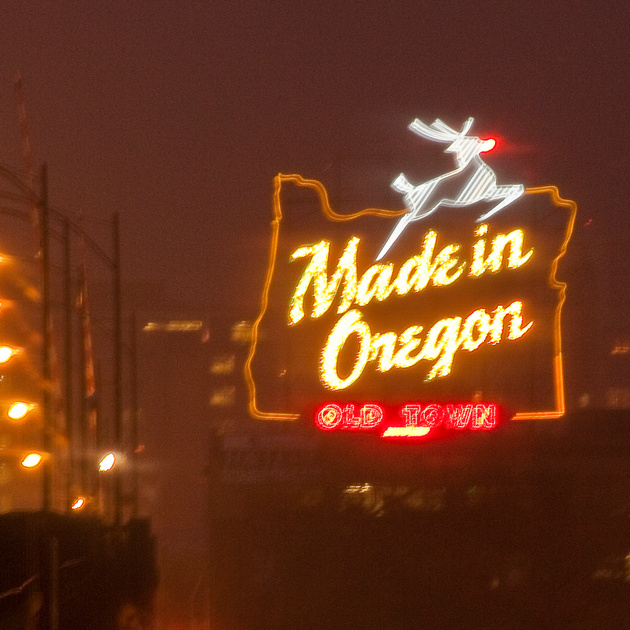 RUDOLPH IN THE RAIN

MADE IN OREGON IN THE RAIN : FINAL VERSION

Both of these images show how the camera can be fooled by both the brightness and color of neon light. The neon is so powerful that it has caused a color cast that while subtle in reality has now completely clouded the images. While this heightens the mood, it is more a product of my imagination than my eyes - the night sky was not red in London or orange in Portland. 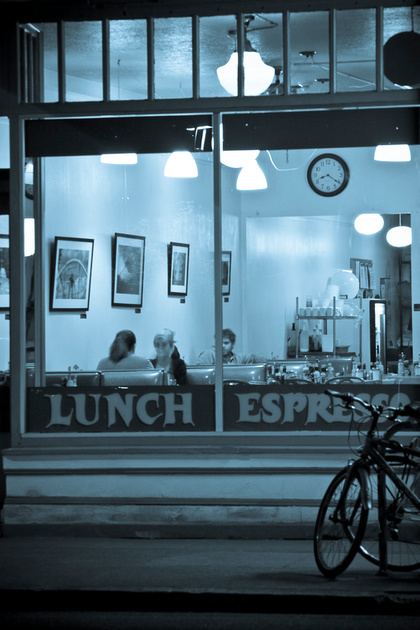 Here i have adjusted the ambient light temperature of this Hopper homage to set the mood and correct both the color cast allowed by the camera, and the excessive contrast cause by the natural color correction that dealt with that color cast. The original shot was unbelievably orange, because the camera reacted to the real orange tone of the restaurant's incandescent lighting which our brains are able to "ignore." Yet when I corrected for that, the straight black and white introduced "unnatural" levels of contrast that made it impossible to see what was going on either inside or outside the storefront. I then toned the image to cut this contrast, using a blue tone that said night to me instead of the usual sepia that rendered this scene as 8:20 A.M. instead of a winter night. I assure you they're still eating breakfast. 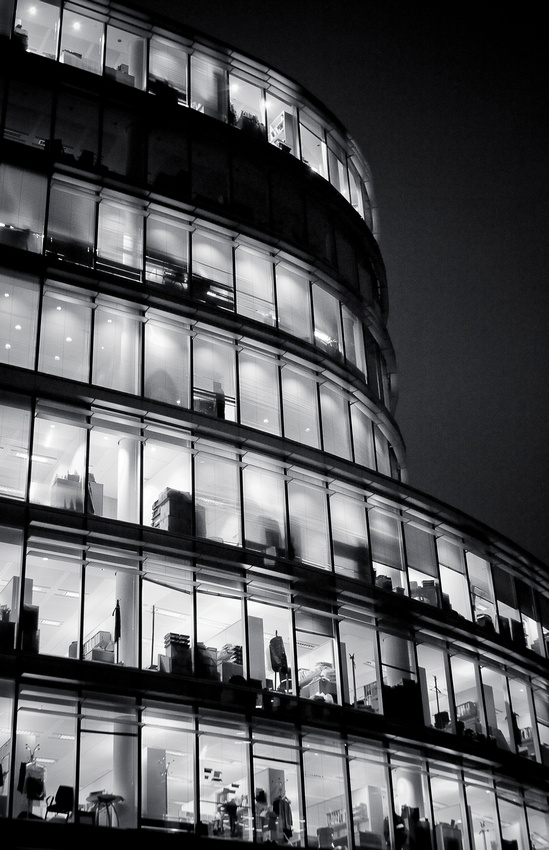 LATE AT THE OFFICE

Now it's so late, that both the camera and my eyes cannot perceive any color in this office building which has just been emptied by a bomb threat. Of course this is my black and white version, but really there was only shades of brown in reality. We had been in an adjacent museum. 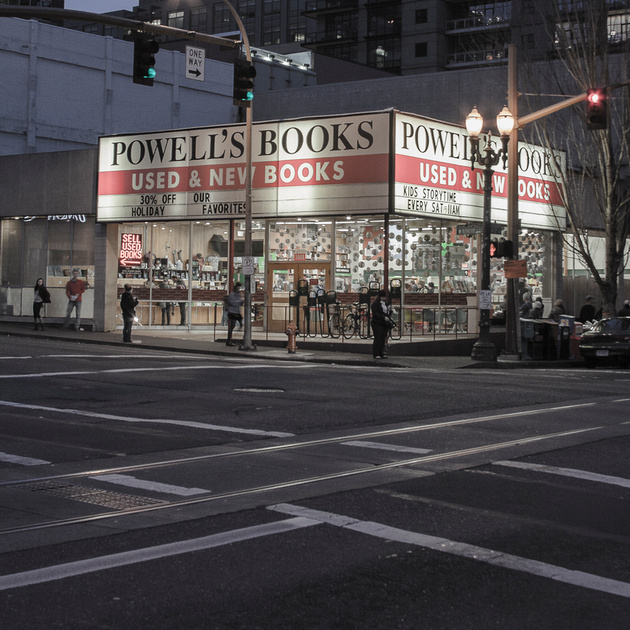 Here for once I've dramatically reduced the contrast and increased the exposure so that the viewer can perceive more detail than in reality. It is much darker on this corner, but I've allowed for far more detail both inside and outside the store, while still keeping it "night." The part of the image I actually like best are the glowing Max tracks in the foreground. 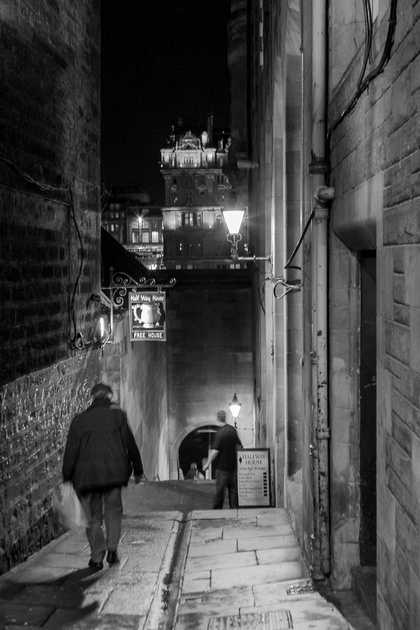 Finally we have returned to the roots of night-time imagery, where photographers revealed the "darker" side of life in the Victorian city. Except for the pedestrian's out-of-focus plastic bag, and the fact that these are not gas lights, this alley scene in Edinburgh  could be more than a century old. Nothing untoward  is going on, but my perceptions that something "might happen" have focused both my street smarts and my photographic attention. Of course I'm just a New Yorker, but you can't be too careful. And my imagination shouldn't stop you from trying tocreate your own nigh-time imagery.