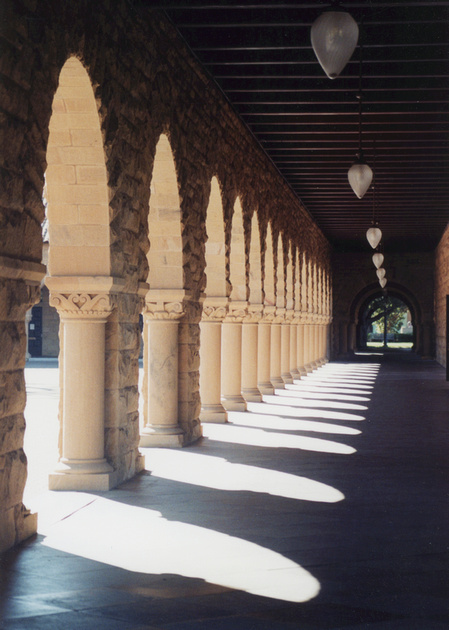 This week I'd like to briefly explore the possibilities that are revealed when you look back to your archives to find images that you captured long ago and for some unknown reason never bothered to care about enough to see if they warranted post processing. Last year I finally acquired a scanner that allows me to convert my old prints and negatives into digital files. Thus I can rescue them from the purgatory of the one-hour photo processor. I will exhibit three different images that I believe I have rescued from the shoe box graveyard. I have utilized the On One software I have explored in my last two essays. While I could just have easily used Lightroom, I have been practicing with On One to improve my skills. I still have to discover a way to show you each stage of my editing process in On One, which seems to lack the "history" function of Lightroom, but I have done the workarounds required to at least show the original scan, the color On One version, and the black and white conversion. I will describe the various steps in the On One process; there is no guarantee that you will like one version better than the other, but at least I hope that you find something in these images to justify their rescue from the archives. 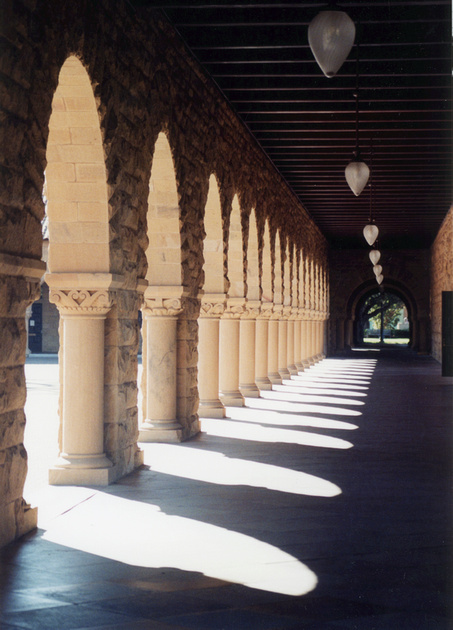 This first image is of a loggia on the campus of The Stanford University, taken on a field trip with Benjamin to check out his prospective college prospects two decades ago. While my son had little chance of admittance at Stanford, I thought it was worth it to show him what a large campus felt like. We were both blown away by Stanford's size and beauty, and how unsuited it seemed for my son. Stanford was designed in the early twentieth century to both mimic European models and to show that culture had arrived in California. It's recent expansion signals the absolute dominance of nearby Silicon Valley; we had to sit down and stare at the entire newly-built Science Quad endowed by Gates, Packard, Google et al. This image is of a part of the earlier main campus, designed to evoke medieval precedents of the Spanish persuasion, as if the Conquistadors had decided to endow a college while they were subjugating the natives. I enjoyed the one-point perspective of the colonnade, and the harsh shadows of the Californian sun. The original image was good enough that I wondered why I had ignored it at the time, but Post processing allowed for several subtle improvements.

I opened up the shadows a bit to allow for some more detail in the wooden ceiling, while also deepening the blacks to highlight the loggia shadows on the floor. The usual sharpening algorithms revealed more details in the columns. On One contributed its "Glow" effect, which is part of its "Sunshine" preset. This raises the white point, lightening the highlights present in the sun/shade contrast without effecting the shadows. The glow slider adds a bit of halos around the edge of the shadows, like an overflow of intense sunlight. While I enjoyed these effects, the important thing to remember is to reduce their initial power by reducing the opacity of these extra adjustment layers. What you see in my On One color version is only a subtle effect, no more than 50% of the original. If you don't reduce On One's adjustments your image will look a little garish. It is a very good strategy to work on an image, take a break, and then return - I find that I will inevitably reduce the post processing a little further. You get used to things while you work on them, only to be "shocked" when you return. If the viewer is too aware of your techniques, you've probably gone too far. This is why black and white can be much more fun, since the viewer seems to accept more manipulation after the initial abstraction of black and white. 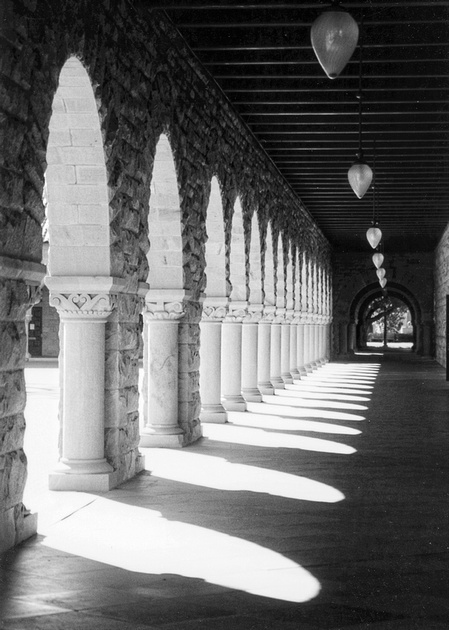 I personally find this much more satisfying. Black and white reveals much more detail in both the columns and the ceiling. Yet it revels in the real subject of the image - the contrast between sunlight and shade. The shadows are better delineated even while the glow filter makes the sun in the courtyard seem as oppressive as it was that day. The glow spillover actually reveals the subtle pattern of the floor tiles for the first time. 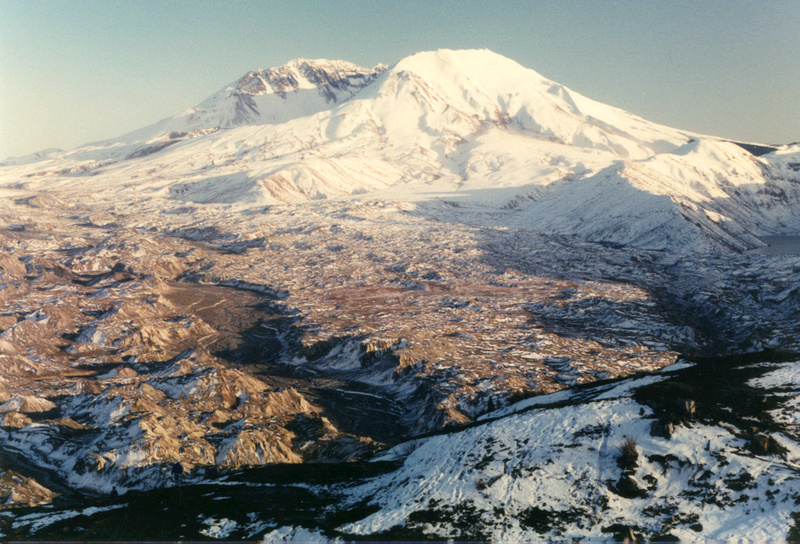 This image of Mt. St. Helens jumped out of the archives as a rare, at least for me, winter view which I had forgotten about. I could not remember that day at all. The image didn't need much post processing; I increased both the blacks and white points to increase the contrast, and applied a one-stop exposure reduction in the sky. I will understand if these seem very subtle. 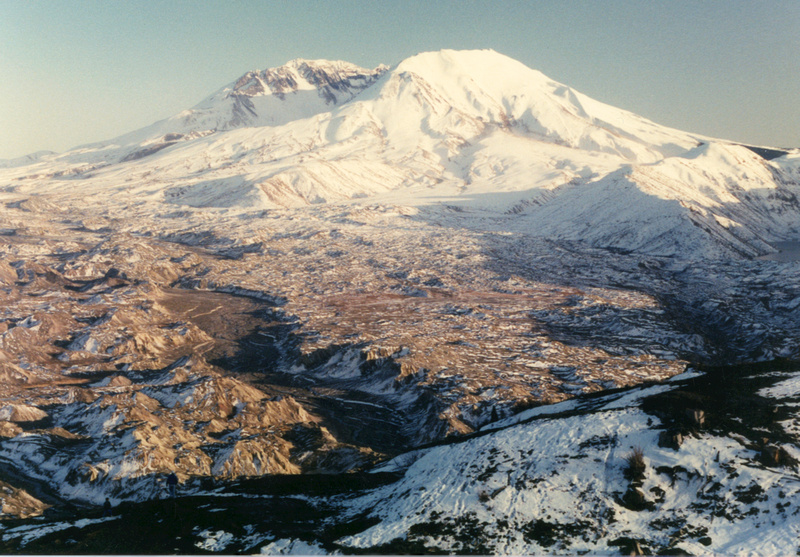 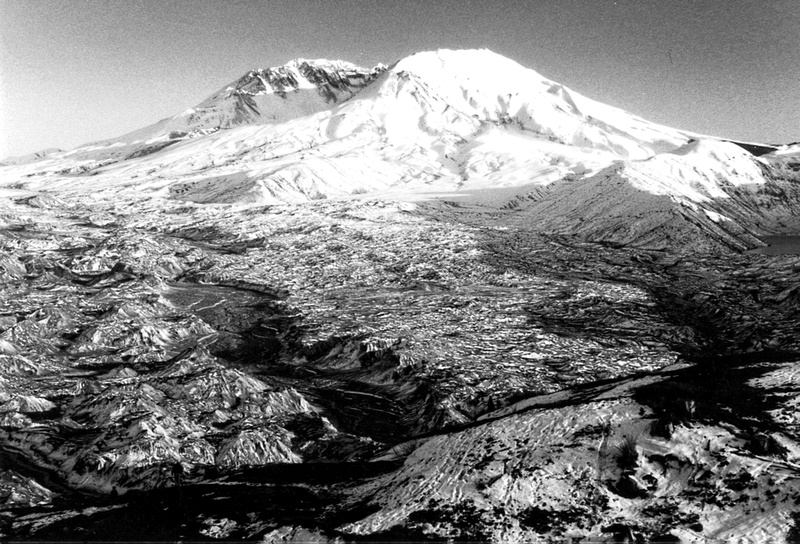 MT. ST. HELENS IN WINTER : FINAL ON ONE COLOR  AND B&W VERSIONS 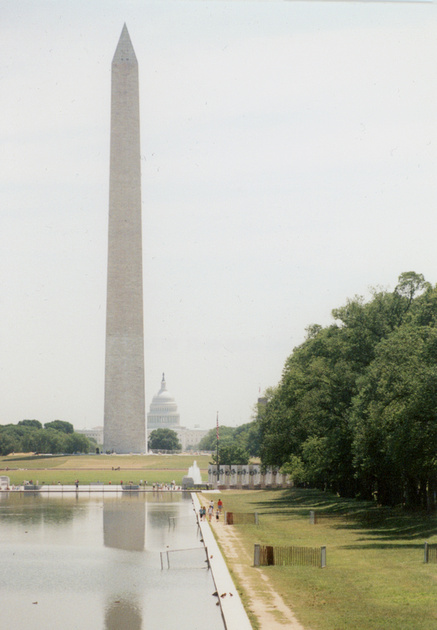 Several years ago I took this shot at the Reflecting Pool on some no doubt too hot summer day. It shows the juxtaposition of the Washington Memorial and the Capital, which reveals the off-axis placement of the memorial. Washingtonians will also realize that I must be on the steps of the Lincoln Memorial, since the higher viewpoint shows more of the Capital in the heat haze than the dome, which would be the only portion seen if I had been on the ground. The post processing tools available in On One allow me to remove all of the distractions present on the Mall, such as the temporary fences. I left the people for scale, but also removed the ducks, which at this scale appear as sensor dust. I even lopped off the tree-top in the distance, which seemed to be ruining the shape of the trees. Distraction is in the eye of the beholder. 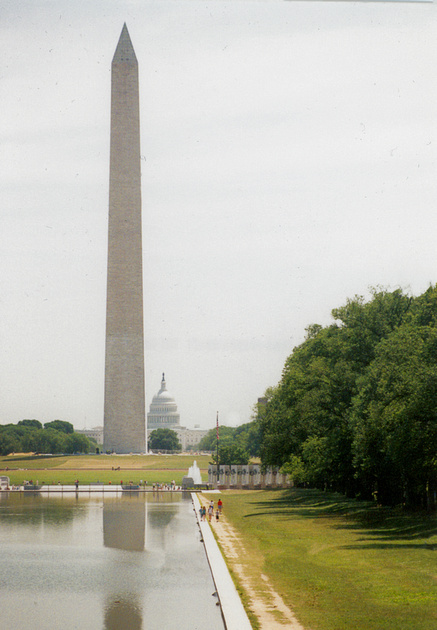 WASHINGTON : FINAL ON ONE COLOR VERSION

All gone, at least at this scale. I've learned to work at the real 100% image size to make sure that it still looks good if you print it at larger sizes. I think you will agree that a little clean up has not distorted the image. De-haze controls have also brought back some detail to the distant dome, which is more than a hot mile from my location. 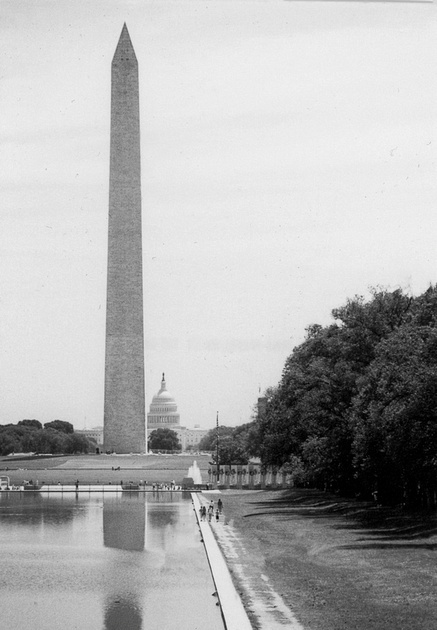 WASHINGTON : FINAL ON ONE B&W VERSION

What can I say? Emotionally, black and white seems more serious to me, more "Meet the Press" if you will. I also feel younger, because the image seems older, or something like that. It's been said that images that are older than fifty-years-old are inherently more interesting, so even though this image is not fifty years old, who cares? You can even pick out the masonry on the monument, and the shift in color of the masonry one third of the way up is more apparent in black and white than in color!

These three images are not earth shattering, but they are not bad either. I hope you have seen that you too could resurrect some memories of your analog past into the digital age. Finally, I would like to kvell in the appearance of our house, which at the age of 111 years finally received what we think might have been only its fourth paint job. In any case, your government's largess allowed Fran and I to finally repaint the house. It was an adventure, but we are very pleased. Our painter was exactly what we deserved, absolutely meticulous but the worst businessman that I have ever met, outdistancing even myself in that department. What should have been maybe a one-month job at most turned into at least four, and finally  one of his friends had to come to the rescue to finish the job. On the other hand, he did a better job at less than half the price of any sane painter in Portland. And he had to deal with us too - I've dealt with our unique color-picking in an essay last year. If you reopen the blog you will see that the color comes from one of my most popular images, "Go By Train."  This vibrant red-orange now adorns our house, and we are so glad that we resisted the Portland  greys, blues, and tans that define our neighborhood. It is so different that most of our friends can't even find our house, which I for one don't understand at all. We now live in the Orange house in the middle of the block, and we love it. 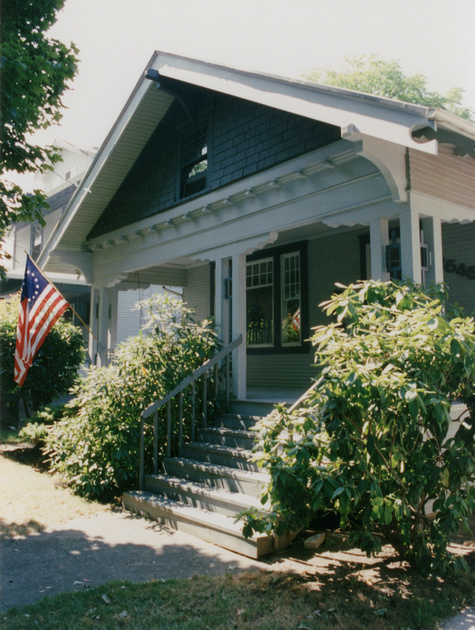 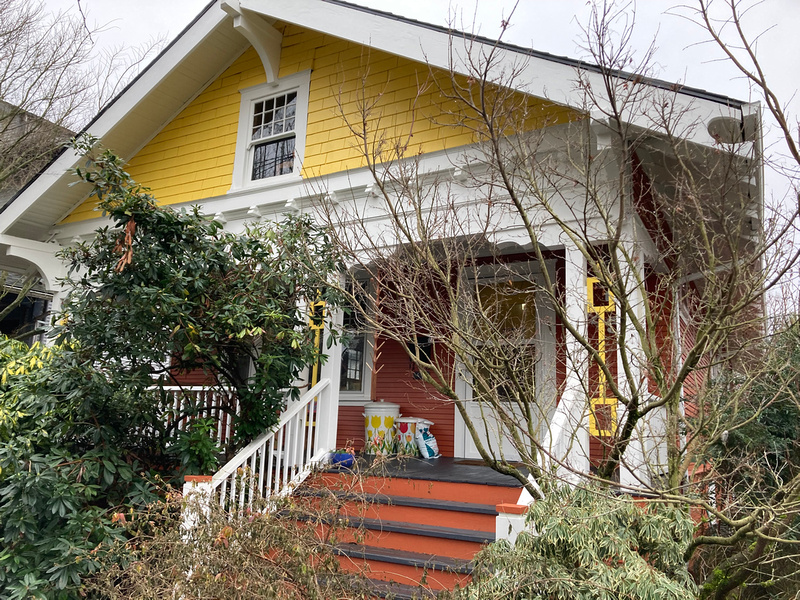 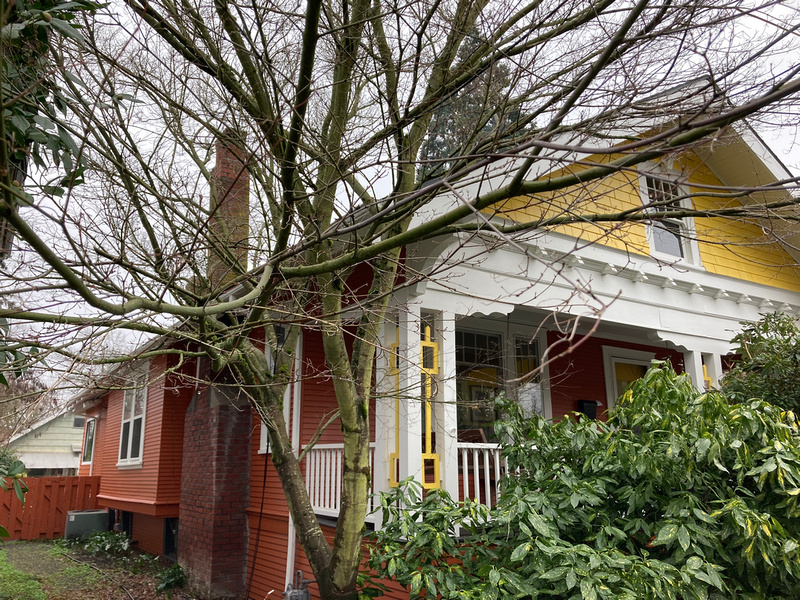 Red/Orange with a Yellow Gable and Trim, a Black porch, and "religious" stark-White trim on the porch and windows. Fran knew that she could have any window trim she wanted as long as it was White, since that's about the only commandment that her heathan husband actually believes in. 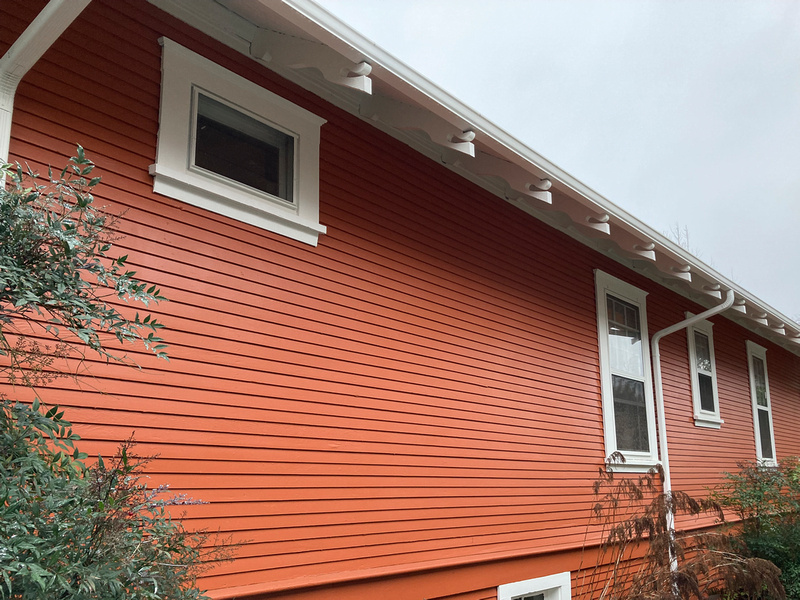 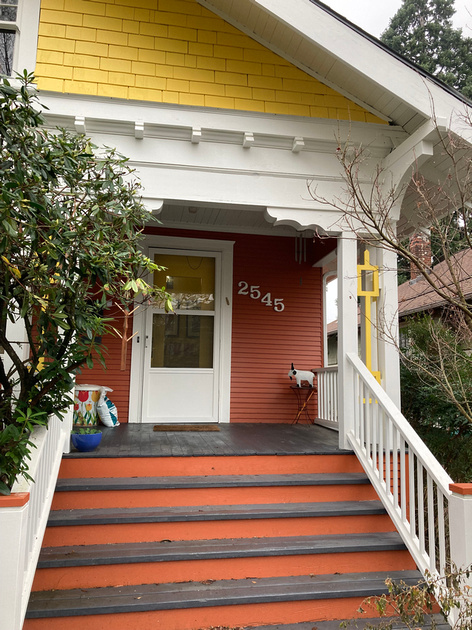 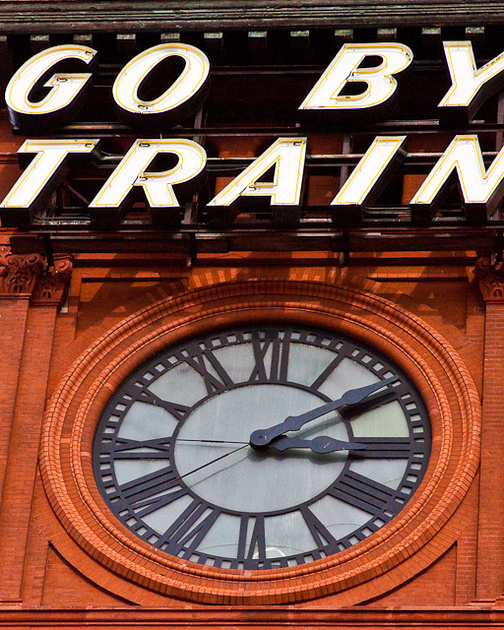 WHAT YOU SEE IS WHAT YOU GET!