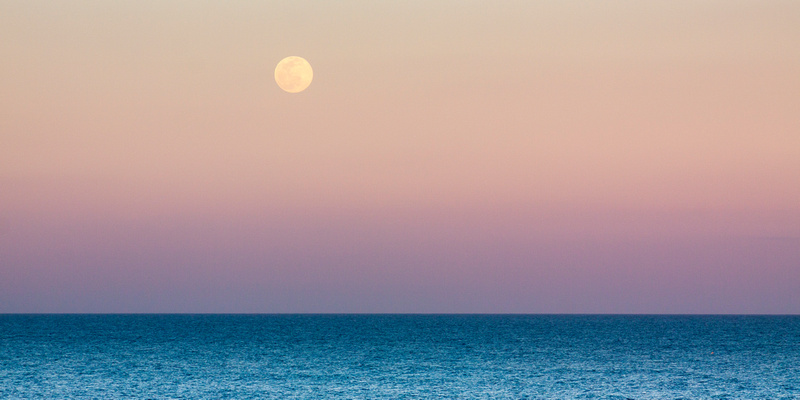 Last week I discussed how it could be very useful for photographers to actively experiment with new techniques or approaches when they go out into the field. I would like to expand this idea by encouraging you to experiment after capture by taking new paths in your post-processing as well. It is very easy to fall into patterns when using software to enhance our images, and a conscious decision to try something new, or even crazy, when we process an image can lead to unexpected and liberating results. 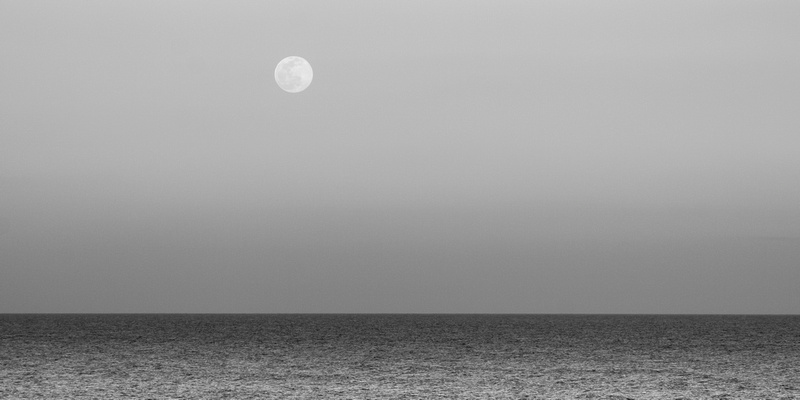 I have a lot of problems with the idea that photographers must develop what we call a "workflow" when we process our images. My first objection is primarily psychological, in that I resist the idea that this is "work", since I have a belief that art should be fun, even if you are crazy enough to try to earn some money from your efforts. I have never spent my work life in front of a computer screen, so I can understand why others might resist transferring their hobby time to more screen staring. But in reality this is not digging ditches, and while it can be repetitive, one might realistically ask why you are pursuing something if it has ceased to be fun. Part of the solution might be to deliberately switch things up, and I'd like to show you some examples of divergent paths I have taken in post-processing several images. I believe that this has led to some exciting new ways to interpret an image. 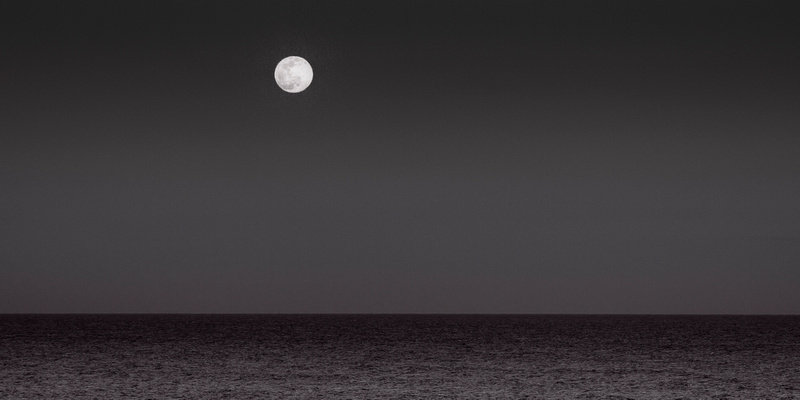 Frequently the first move I try is to see how the original color image would change if it was converted into black and white. This is not usually done in search of nostalgia, or in an effort to just include an image into a portfolio of monochrome images. I have found that a black and white conversion can totally change an image, especially if the conversion is accompanied by additional moves that modify the image beyond removing color. In other words, we are not just searching for grey-scale, but seeing what we can also do to change the image's interpretation. Using the abstraction of black and white allows us to modify an image far beyond what most viewers would accept in a color photo.

The first example is the three different versions of this seascape off the North Carolina coast. The first image is a classic color image of the pink skies that can accompany the beauty of sunset if you are looking in the "wrong" direction, i.e. the sun is setting behind you. It's even more fun if the moon is rising. I cropped the image to emphasize the pink band, but increasing the saturation  was not necessary - this event, which seemed to occur at 7:15 pm on the dot for over a week, was just that beautiful all by itself. The question then becomes what you would do  and why you would convert a photo which seems to be all about color into a black and white photo? The first example shows what usually happens - a somewhat boring grey scale interpretation which does not replace the intensity of the color with anything very useful. We'll see later that you can attain a new level of detail by leaving out color, but this image is very simple, so that doesn't seem to work. But what about if you advance the clock a few hours? The final moody night-time shot, done by simultaneously drastically lowering the exposure and heightening the glow of the moon, changes the mood completely and doesn't strike the viewer as fake at all - impossible in a color shot. 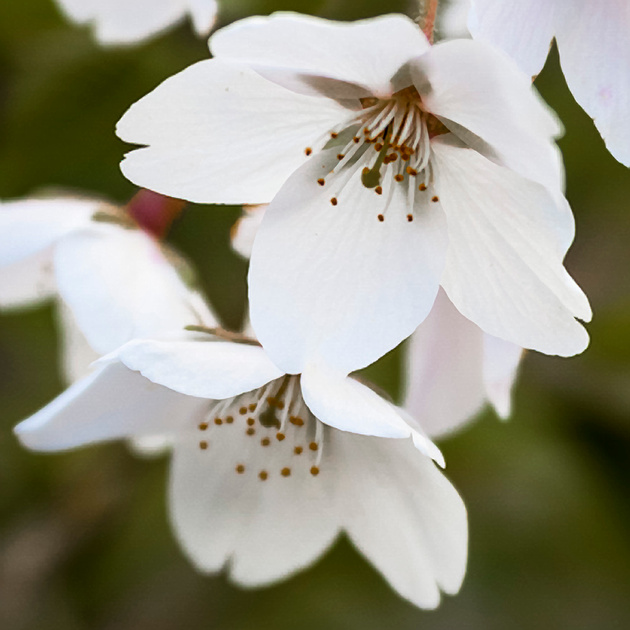 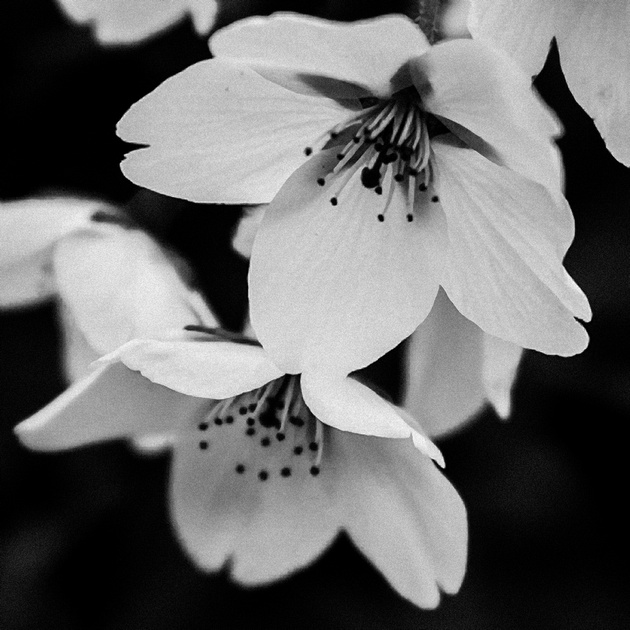 Here is another classic example of what is seemingly a fool's errand in black and white conversion. Why would you remove the color from a flower portrait, a stereotypical example of the power of color imagery? In this example I do it to emphasize the structure of the flower, and as a way of surreptitiously isolating it further from the background by converting said background into a velvet curtain. Viewers would not begin to accept this much contrast in a color image, at best figuring it was a studio shot as opposed to a real flower in a garden. 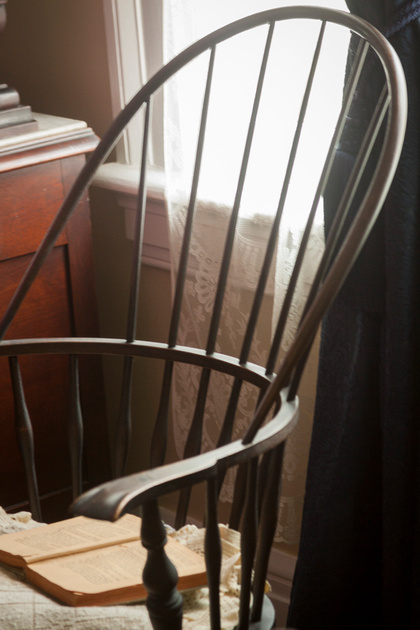 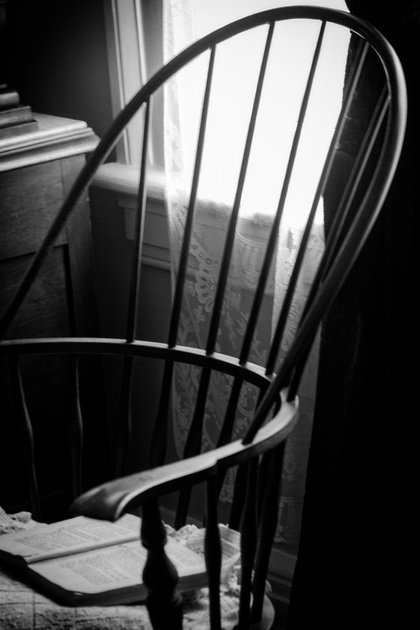 Here I've used the black and white conversion to make the image more about the light on the chair than anything else. We lose the beauty of the various wood shades in favor of the various tones on  the chair. The Bible is subdued, the chair's surroundings fade to black, and the pattern on the curtain is made more important in the monochrome version. 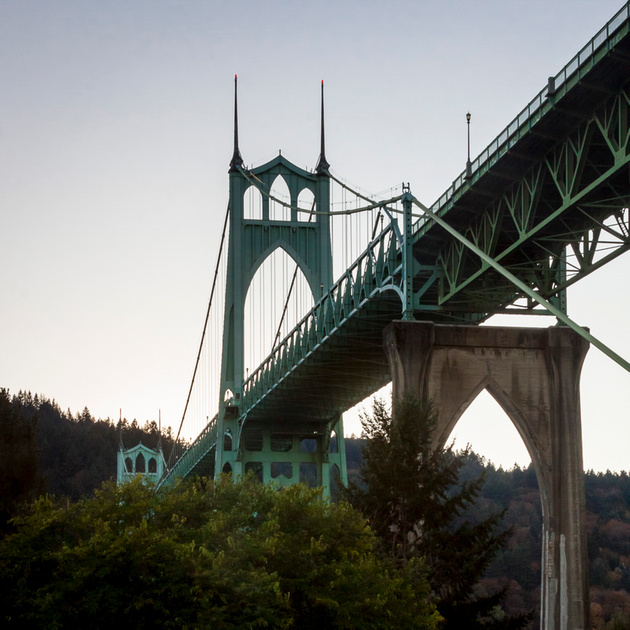 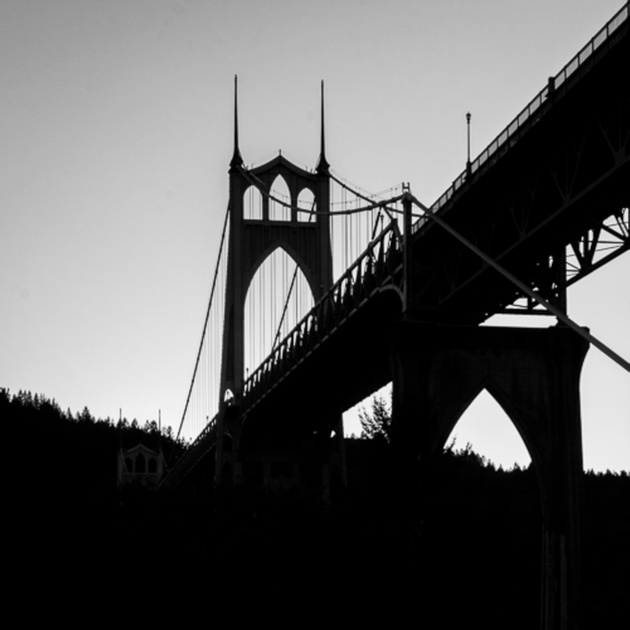 These days a popular political cliche is not to waste the importance of a political crisis to not take advantage and accomplish other changes while you deal with it. I would carry that over to black and white conversion. A well-composed (if I say so myself) view of the St. Johns Bridge is converted into film noir interpretation suitable for Gotham City by exposure manipulation that converts it into a total silhouette, with almost no detail inside the black bridge. While I am almost always in awe of others who can coax hundreds of shades of grey out of a black and white, I am neither as skilled or oriented in that direction, so why bother? 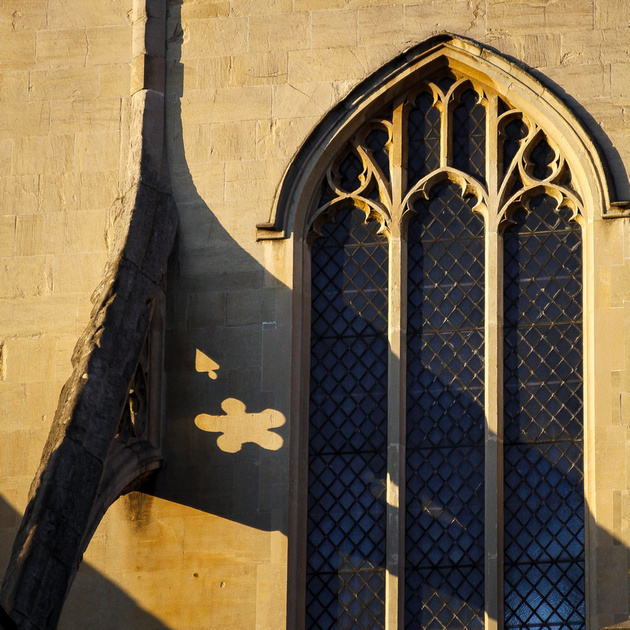 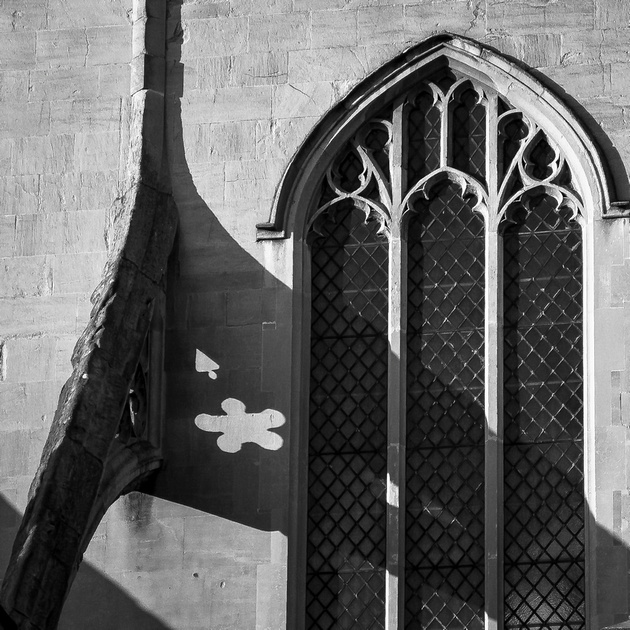 Sometimes it's just a matter of going with your gut, with the proviso that both interpretations might be equally as worthy. The color shot is a love letter to the beautiful sandstone Chelsea Cathedral in London, resplendent in the setting sun, with an interesting complementary blue glow in the stained glass. The black and white is all about the shapes of the arched window, the light and shadow of the flying buttresses, and somehow the texture of the stone is even more important without the golden color. 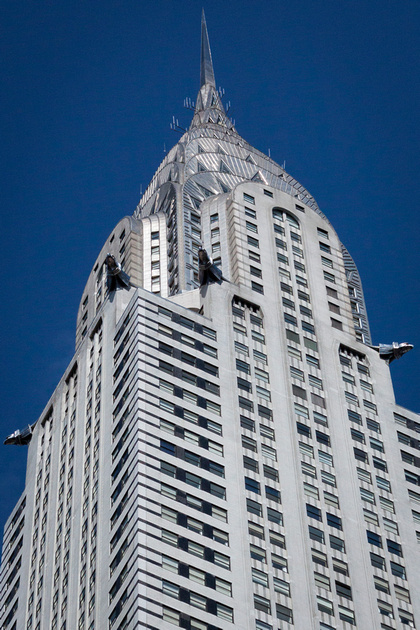 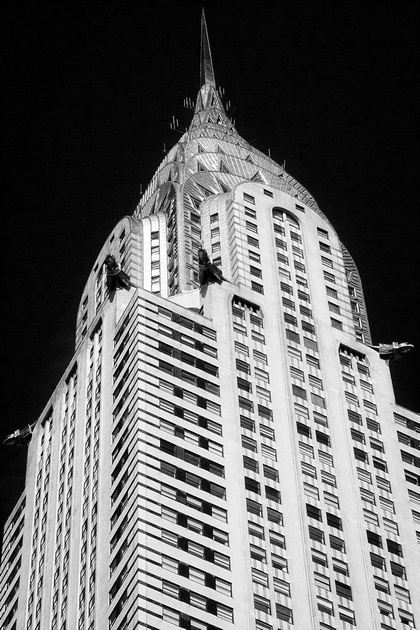 I love the Chrysler Building more than any other skyscraper in New York. It seems the most romantic building in the city, with its spire and frankly ridiculous Art Deco ornament, where hood ornaments become gargoyles, that it always makes me smile. The black and white conversion of this focus on the top converts what is really a post card into something very different. The spire and ornamentation, in fact the whole tower, positively glows because I have adopted a black interpretation of the boring blue sky that even Ansel Adams would be proud of. This has no relation to actual reality, but no one is offended by my departure, for we have an almost infinite acceptance of such manipulation in black and white. 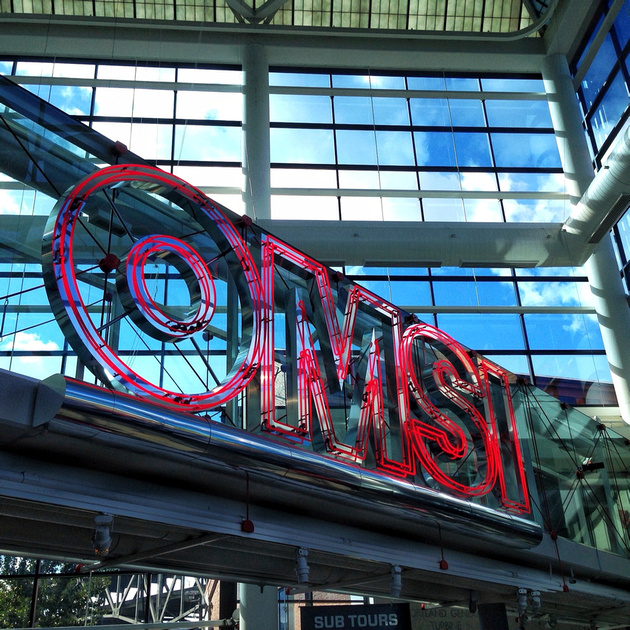 Finally, we have an image which seems to be all about the color of the beautiful OMSI entrance sign that proudly stands in the building's lobby atrium. The image is another example of my love of outrageous color, and the power of letters to capture our attention as graphic devices way beyond their communicative utility. The OMSI red, contrasted with the mechanical/architectural gray and a typical Portland sky with powerful clouds, screams color photograph. Thus I was a surprised as anyone when I worked on this black and white interpretation. 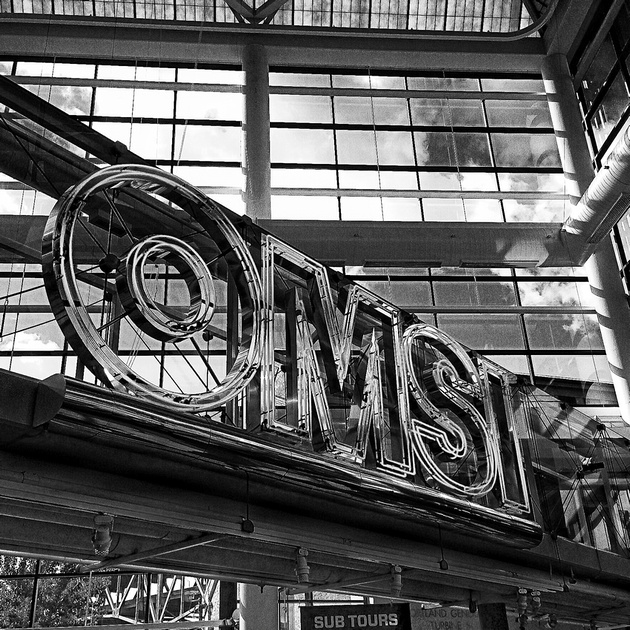 A black and white interpretation that cranks the contrast up to 11, throws in a lot of "glow" as well as an equal amount of sharpening, has resulted in a black and white image where, at least for me, the neon letters are even more vibrant than the color version. Once again, experimentation has yielded unexpectedly delightful results.