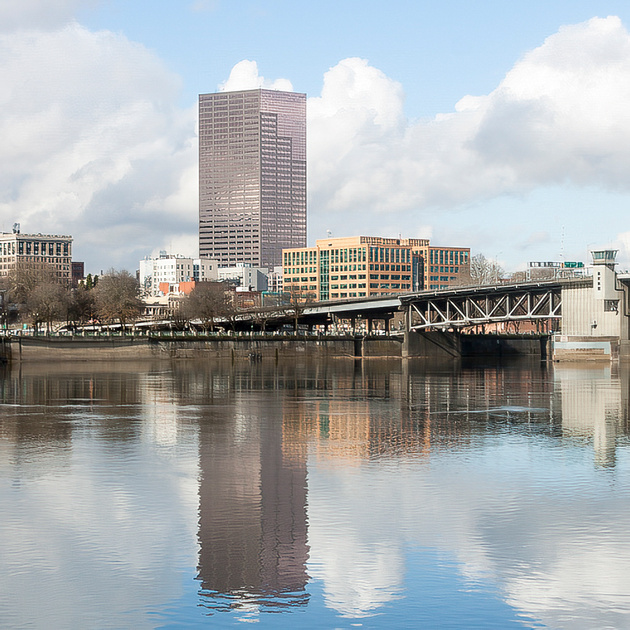 BIG PINK AND THE WILLAMETTE : COLOR

This week I would like to discuss the power a photographer possesses when it comes to using modern post-processing in adjusting images. I believe it can in fact be much more important (and fun) than the initial capture of the image. This after-the-fact manipulation is based on the photographer's compositional skills, but it allows for a more personal interpretation of what might be a standard shot. It is certainly not "cheating", although everyone has certain limits concerning what they are willing to do to an image. My art is open to your interpretation - but it is my art, and the viewer should avoid declaring that my rendition of a scene is not the "truth". These nine different interpretations of this scene on the Willamette differ, and one might appeal to you more than the others, but none of them, in my humble opinion, is "wrong." Their is no real difference in interpreting an image in the traditional darkroom or in Lightroom, the clever name for the computer software that I use. Photographers have always used various techniques to interpret an image to their current satisfaction, which might change upon further viewing. Sometimes we will get even bolder, but often we dial it back a little after taking another look. I have already "dialed back" two of these images while I was preparing this essay this morning.

The "original" image above not straight out of camera - it has already undergone some basic corrections. It has been cropped to emphasize the subject, which has been adjusted to fit the square format required for its future as a photo coaster. The river bank has been straightened out for a level horizon, but i was far enough away so that Big Pink is not leaning enough to need to be corrected. The image has been sharpened to my standard levels, which will not make up for any camera shake, but is required by a digital photograph's initial softness. Subtle adjustments to contrast and saturation has also been made, because the "digital negative" of the RAW settings that I use allows for more manipulation later by delivering a very flat, uninterpreted file. Another falsehood that many photographer's continue to believe is that their JPEG files "straight out of the camera" are a straight interpretation of reality, while they are in fact the camera's computer rendering of a smaller file. The JPEG is already an interpretation, just one that is done frankly by a simpler computer than your laptop, over which you have no control, and will be degraded every time you subsequently adjust it. Programs like lightroom never touch the original file - your editing is non-destructive, and what you see on your screen is just a compilation of the "instructions" that lightroom will do if you export the image to the web or print it so that will re-enter the analogue world. 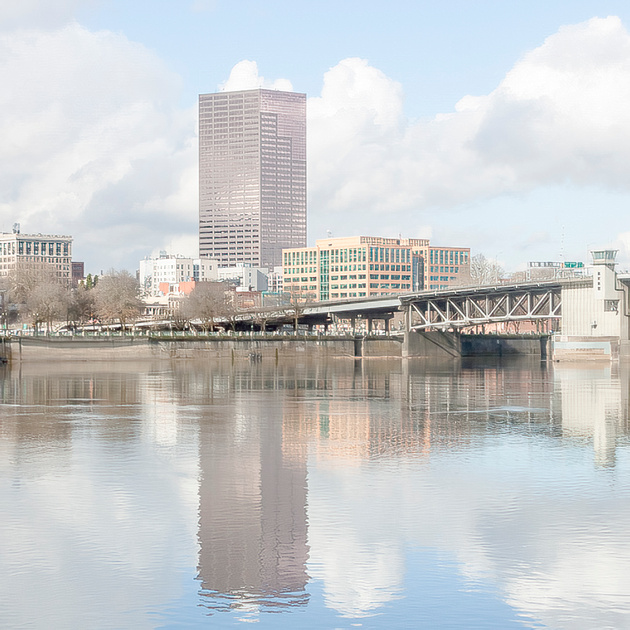 Now the fun begins. These three other color versions are I believe, realistic interpretations that I could make of the scene. The first is what photographers call "high key." It is not over-exposed, but the exposure is twice as bright as the original. it's just adjusted so that the brightest tones are in fact brought down, while the darkest tones are "crushed" to eliminate almost all of the true blacks in the image. The contrast is also lowered to reduce the difference between the lightest and darkest tones in the image. Unlike an HDR image, which tries to make everything visible, the high-key image will not eliminate all of the shadows, and might still contain some very small areas of dark tones that will ensure a degree of realism. So the result is a "brighter" version of Portland, which might be aspirational while still close to reality. Big Pink has in fact been darkened to ensure it doesn't fade into the brighter sky. 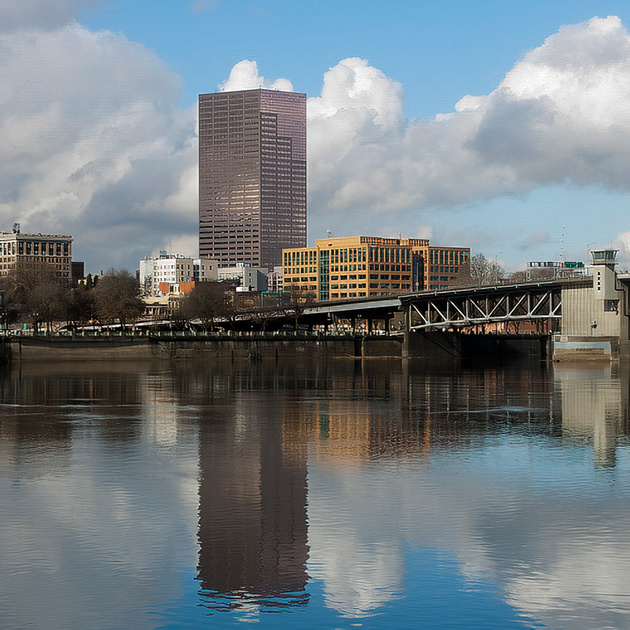 Now we turn to what is termed a "low-key" interpretation. The  first version is darker, and upon instant reflection I dialed it back. The second low-key version is more subtle. The real difference from the original image is now the tones in the river, which are a little darker and richer. 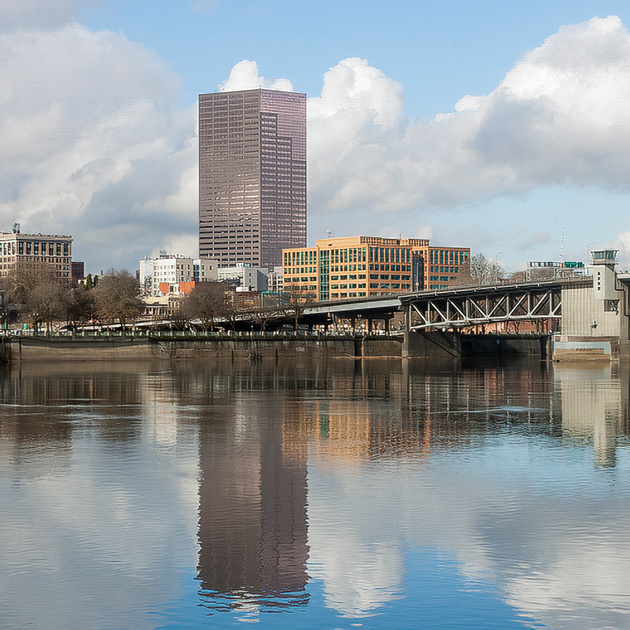 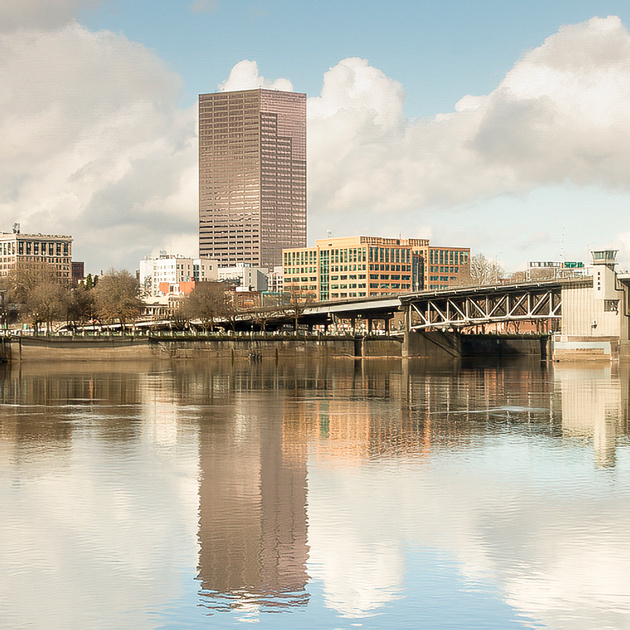 BIG PINK AND THE WILLAMETTE : THE SUN WILL COME OUT TOMORROW

There are other ways to affect a color image. One can manipulate the white balance to a degree without outraging the viewer. Most people seem to like warmer tones, and photographers have been baking this into their images for a long time. Subtle under-exposure when using film by rating it at a lower ISO then on the box was common; now a lot of people just tell their camera that it's shady when it's just a bright Summer day to accomplish the same thing in camera. Shooting in Raw allows you to subtly do the same thing in the computer with more control by just tweaking the white balance a little towards the warmer part of the spectrum, avoiding the color casts that can occur when "colorblind" males like myself directly adjust color hues directly. The result is just a sunnier, warmer day than most Portlanders expect, but not unbelievable.

It is hard to achieve bolder color interpretations without straining viewer credibility; I never subscribed to the HDR craze which resulted in what can only be described as surreal color imagery. While our eyes can see much more of the dynamic range of the world than our cameras can, it just seems weird to open up the shadows so much in a photograph. Our brains can see more detail in the highlights and the shadows because we are not really looking at them at the same time. But when our brains allow for abstraction by removing colors in a monochromatic image, we all seem to widen what is an acceptable interpretation. 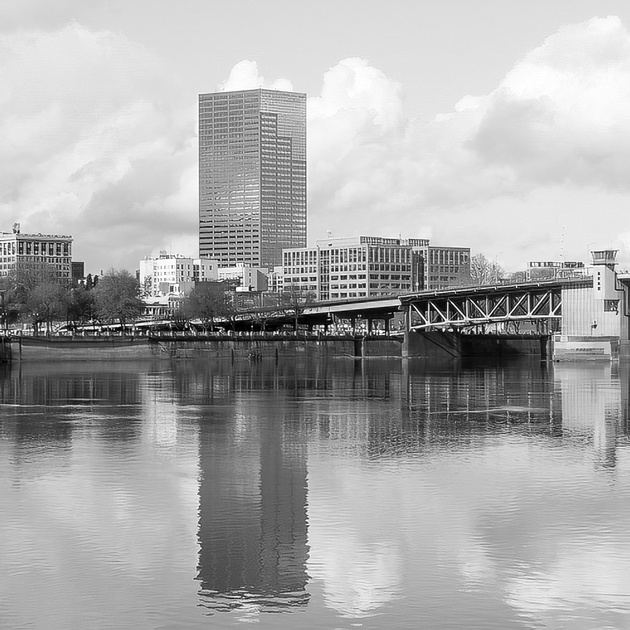 BIG PINK AND THE WILLAMETTE : STANDARD BLACK AND WHITE

You can access these varied interpretations in many different ways. The easiest, and again by no means "cheating", is by using presets which are supplied by the software. In this way one click will lead to a different interpretation which the human in control will have to decide is appropriate  for the image under consideration. You don't like, go on to the next one, until one strikes your fancy. But the best part about presets, once you get over their amusing names which rival the names of paint colors, is that the same sliders that you move in the software move when the preset is clicked - and then you can still move any of them make the preset just the start, not the end of your black and white journey. Another way is to make  the "standard" black and white interpretation, but use the different color interpretations you have already made as the different starting points. I, true to curmudgeonly form, just started out with the standard black and white and made my different versions by manipulating the first black and white interpretation. 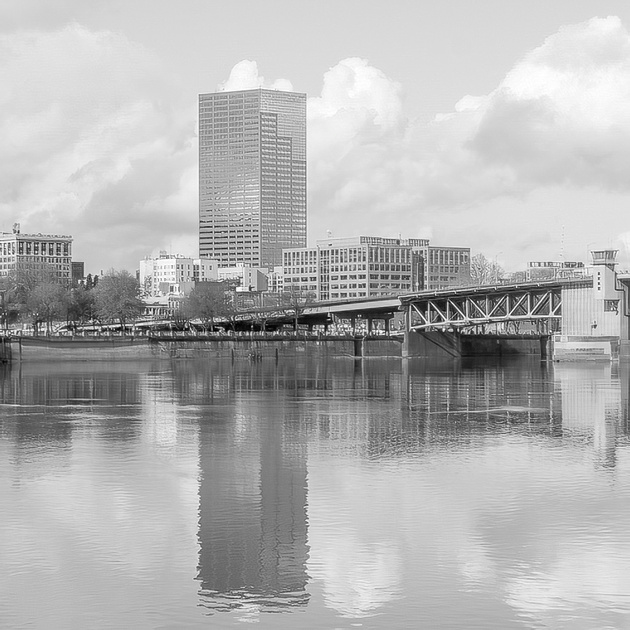 BIG PINK AND THE WILLAMETTE : HIGH KEY BLACK AND WHITE

Here is the "high-key" black and white. While if you look at the mid-tones you can see that the overall exposure hasn't changed much, The shadows have been opened up considerably, and there is very little pure black anymore. It's a sunny day in Portland! 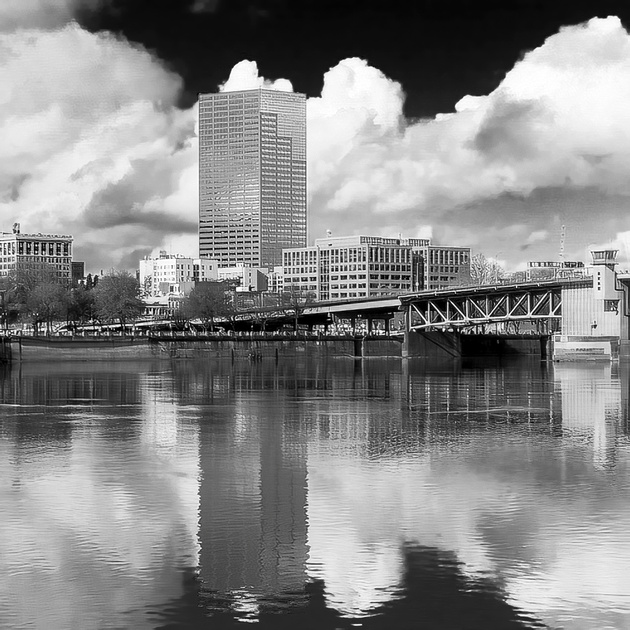 BIG PINK AND THE WILLAMETTE : DRAMA

Or we can go for more low-key without muddying the waters, forgive the pun, by avoiding lowering the overall exposure but just manipulating certain colors. Viewers accepted early black and white photos even though there was almost no detail in the sky since early films were not very sensitive to blue - our brains accepted white skies in the black and white world until advancements in film technology allowed us to see the clouds up there. Since photographers could now manipulate the sky, we soon learned that in our quest for contrast - the "color" in black and white - allowed us to render the sky in very dark tones. We know that the sky isn't really black, but isn't this arresting? Lowering the exposure of just the original blue tones in the sky and its reflection in the river makes for a much more dramatic mood. 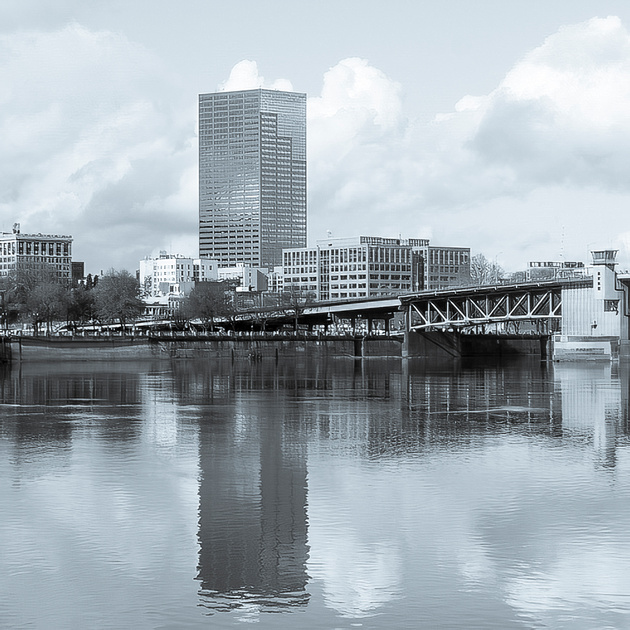 BIG PINK AND THE WILLAMETTE : KIND OF BLUE

Monochromatic images don't have to just black and white. Sometimes it can be delightful to inject a little monochromatic color to subtly affect the tones of the photo for a slightly different mood. I resisted the sepia tones most familiar to viewers from early black and white photos because it didn't seem to fit this view of modern Portland. But this blue tone seemed just right for our overcast city. A Selenium tone is another historic way that photographers used additional chemicals to prolong the shelf life of their prints. The software adds a blue tone, mostly to the highlights, while the darker tones remain mostly black. Even though no chemicals have been used here, I could add their blue tone, and then dial back the saturation to achieve even more subtlety than the computer's version. 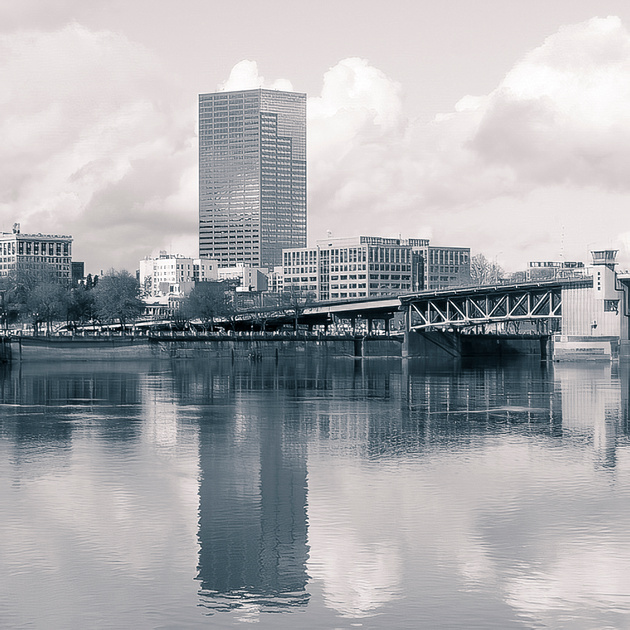 Soon photographers started asking themselves that if they could add a color cast to their black and whites, why just one? Contrast could be subtly heightened by adding contrasting color tones to the highlights and shadows. Instantly dubbed "split tones", these black and whites achieved more than straight luminosity contrast by injecting subtle color tones in their shades of gray. This was not colorizing - these colors were still abstract tones - but photographers were soon tanning up the highlights while blueing up the shadows. As usual in post-processing, subtlety is the key, with success achieved through intriguing the edge of view consciousness without hitting them over the head. Somehow the black and white is richer; and if our brains allow for a white, or a black sky, why not a tan one?

I hope you've enjoyed these different interpretations of a February day on the Willamette. None of them strike me as too weird, but I'd love to hear which ones struck your fancy. Don't feel bad if any  were just not your cup of tea. And I would really love it if this essay allowed you to think "out of the box"  when it comes to reinterpreting your images. Your creativity can extend way past hitting the shutter button.