I have finally decided to bite the bullet and try my hand at blogging this year. I'm interested in providing more content for my website beyond a portfolio and a store, and after a year of pandemic and the closing of Saturday Market, I'm trying to provide a way for visitors to virtually visit my booth and talk to the artist. I have always resisted the idea that only I could sell or explain my art, rather than letting it work by itself, but I have come to realize that people love to understand an artist's motivations and process beyond the silly artist statement.

I will use this blog to try to discuss a particular image, it's origins and the route to the final print. I hope the viewer can gain some insight into my motivations, techniques and artistic struggles by delving into the development of an image. I'm not an earth-shattering artist, but I have been taking photographs longer than most of my viewers have been alive, and I have been crazy enough to exhibit and try to sell them for more than a decade. I have sold images to people who have brought them back to homes in all fifty states and 58 different countries around the world, so I feel that a lot of people see their value and might want to learn more about my photography.

I am a self-taught photographer, constantly aware that I probably could and should improve, and also realizing that photography is both an easy and difficult form of art. Everyone is a photographer, but photography is very hard, especially as you improve and realize how hard it really is. Like most things in life, it takes awhile to understand that the process, the journey, is a lot more important than the final product. I enjoy taking photographs and working on images and I hope that comes through in my writing.

This image has always been very popular; it is also interesting in how it changes focus when it gets enlarged. In addition, it is something that is easily duplicated by other photographers if they so desire, and in fact it is part of what might even be considered a genre - the raindrop photo. Mine is not extraordinary, but it is mine, and has given lots of people lots of pleasure. That's all one can hope for. 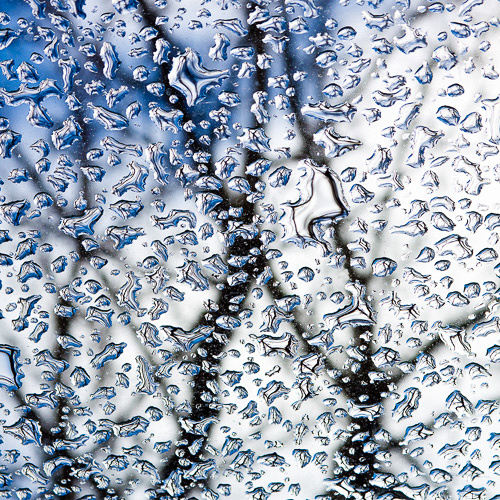 The image is titled "After the Rain"; it was taken on March 6, 2012 during a walk in Downtown Portland. What the hell is it? An artistic hint - if you can get someone to show even that much interest, you are half-way there. The only problem is to keep them interested in an abstraction, which most people do not appreciate, when you reveal what the image really is. And if you don't reveal the subject, it better be damn good to make up for your arrogance - we are photographers, not magicians.

The image is a photograph of a pattern of raindrops on a new type of bus shelter on the Transit Mall. These new shelters intrigued me as a citizen and designer, in that I had finally lived in Portland long enough to see a renovation of the original structures. As they were brand new, I was confronted by q virginal example, which had not been subject to graffiti of any kind. Although I must say that Tri-Met's anti-graffiti efforts, which involve artistic etchings into the glass to hide the original tag, have attracted admiration from transit agencies around the world.

The rain drops are not streaked because they were on a horizontal surface, the skylight of the shelter. Of course the viewer doesn't know that, and relies on the primitive parts of their brain to surmise that the black shapes must be trees on the Mall in the distance. A big part of the fascination effect (the "wow") is that we usually don't view rain in this way. I've frozen something in time, allowing for an inspection process that is not part of our ordinary world.

This wasn't that hard. It's just slowing down and observing, which is something I'm good at, and usually I am mostly confused at why other people don't seem to be able to do it. I guess I'm a better slacker than I give myself credit for, and most people have more important things to worry about than how pretty the rain looks on the new bus shelter. The critical decision here was the focus point, which I had to control - it's a different photo if the trees are in focus instead of the drops, and probably not as good. What's fun with auto focus is that you frequently have to fight your camera to achieve focus on what you want to be in focus, but that fight can itself reveal more interpretations. My camera is now considered a near antique, so it doesn't include 489 focus points or whatever, and things like Eye focus are even more in my dreams. But since most of my photos are of things that are far away, don't move, and don't talk back, I can usually take all the time I want to frame the shot, make exposure decisions, and hold still.

The framing was pretty simple, once I had as usual decided to remove most of the context. I didn't design the shelter - why should I care to show it in all its complete glory? When you are interested in details, like I am, the problem becomes how to make sure that you exclude anything you don't need, like the skylight frame. I did remove one small leaf in post-production, which bugged me but probably no one else would have noticed. The included blue sky was not really a conscious decision, but I like it, and it sort of reveals that we are looking up after all.

Another interesting facet of "After the Rain" is that it changes when you enlarge it. Most photos do not change very much - yes, a landscape can have more impact at a larger size by revealing more detail, and some photos do have a "best" size, but they usually are about the same thing. This image's subject changes as it gets larger. As a 4" x 4" photo coaster, it's about the original idea; it stays that way until about 16" x 16", when it becomes more about the pattern of drops; at 24" x 24", the subject has become the in-focus(!) trees within the drops! So I actually took a raindrop photo, which is about the raindrops as additional lenses for the subject beyond, without really trying, for better or worse. I can't show you larger images here, but additional crops might explain: 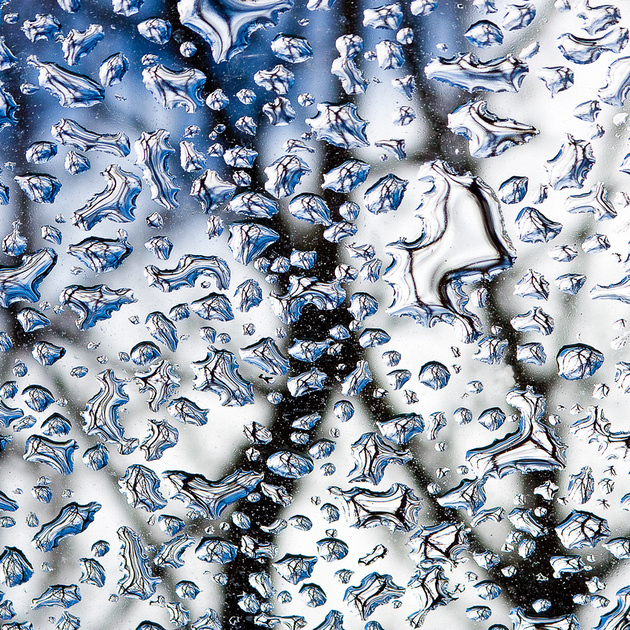 The subject of the photo has subtly changed, even though you could argue that the image was never really "about something." It certainly wasn't about the new bus shelters in Portland. But I will say that when this image is viewed in the proper context, like my booth on a typical "nice" day in Portland (only threatening rain) that it certainly catches the mood of our fair city.

Finally, what happens when you go even more abstract, by eliminating color? I did this for a customer who wanted a portfolio of black and white images. 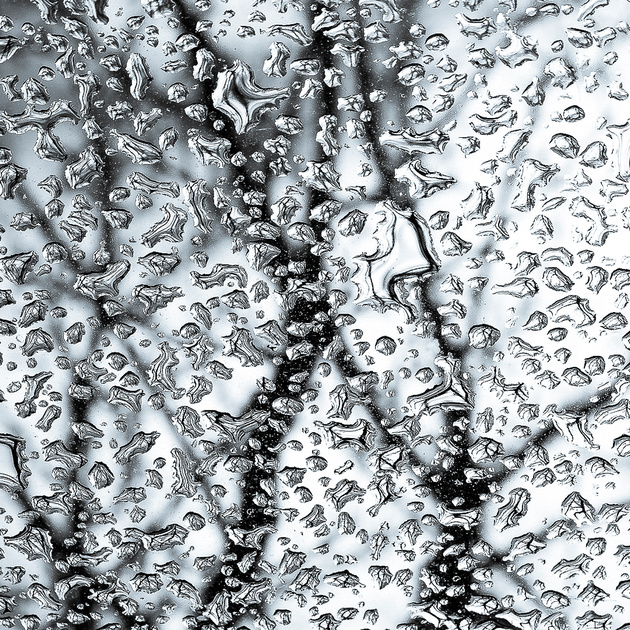 It's a little more somber, but the lack of color forces even more attention on the raindrops. I hope this has been interesting, until next time, Rich.