THE SUBJECT OF A PHOTOGRAPH IS ... THE PHOTOGRAPH 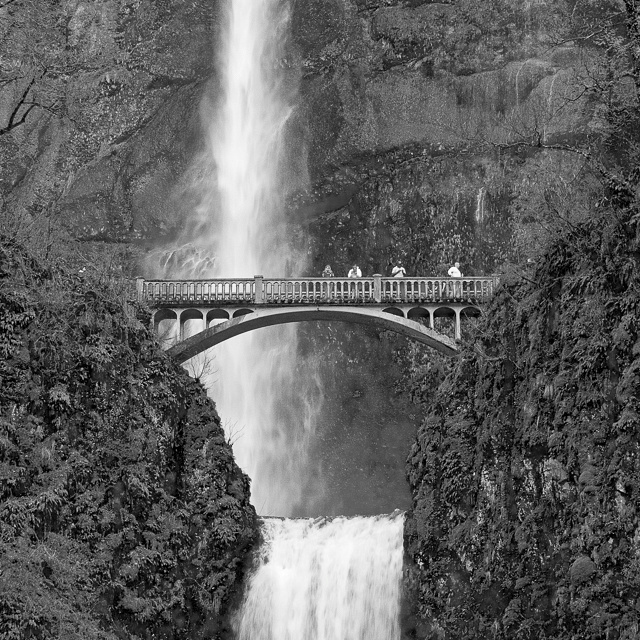 I'd like to discuss a massive conundrum in what we might call "the reason" of photography. Since it's creation, there has been a debate among photographers (and only much later, others) about what the heck we are up to when we practice photography. The basic distinction has been between documentation and art, or how much "truth" is being revealed in a photograph. Is the photographer merely a pusher of a button of a machine he/she barely understands, or is the photograph an image which is the creation of the maker, interpreting reality in their image, regardless of the actual subject?

Now we can get as heavy or simplistic as we want, but the basic theory of photography as an art is subtractive, in that the artist does not start with a clean slate, or a blank canvas. I am viewing the real world, and mostly deciding what I want to leave out of a photograph; the actual scene is almost always too confusing or at least unfocused, so I must try to simplify reality to direct the viewer's attention to the subject at hand. The beginner doesn't deal with this, usually only attempting to document that they were somewhere and took a picture - the selfie is just a less sophisticated version, proving they were there by putting themselves in the frame, making their presence explicit. Once a photographer realizes that they are capable of taking an image which is focused and well exposed, they then face the beginnings of the artistic dilemma - how and why is my image any different? And pray tell, as the image becomes more interpretive, at what point does it become so unattached to reality that it ceases to be about something that was photographed?

There are obviously different "rules" dependent on the individual photographer, and what they are communicating to the prospective viewer. These range from photojournalists, who are selling the "truth", and who rightly are worried about anything that might call the image into question - even if what they might do is routinely done to every other photograph ever taken. Cropping is a slippery slope towards eliminating the out of favor Commissar from the annual Red Square lineup; even exposure decisions can be "too interpretive".  I've even talked to photojournalists who couldn't convert their photo to black and white from the original color because it "sent a message."

Some few photographs are additive - a still life is assembled by the photographer, and a product shot attempts to present as clear and beautiful a rendering of a widget as possible. Other genres are combinations - fashion images are selling clothes while trying to convince viewers that they will appear as absolutely stylish as the model 8" taller and 50 pounds lighter in that same frock. It is only recently that we've started to admit that even the most beautiful women in the world are routinely "retouched" so as to be worthy of our gaze.

Where does this leave the landscape photographer, who is trying to interpret a part of the real world for viewers who have never been there, or more frequently for people who have fond memories of having seen the same thing "in real life". Each person must make their own rules, or at least not try to obfuscate how far they have left the reality of what they saw behind. Everyone "frames" an image, leaving things outside the frame that will contradict, or at least not contribute to the image. Most people will manipulate the exposure to some extent beyond the "proper" exposure, especially since the machine is trying it's best to render the scene as 18% gray, which is why snow is often different shades of dirty white, even outside New York. With the advent of digital post-processing, photographers can now eliminate "distractions" along with dust spots - but they always could "dodge and burn" in the darkroom to emphasize whatever part of the image was important to them. Even replacing whole skies - substituting a dramatic sky for Portland partly cloudy - was anticipated in the black and white darkroom, and often didn't even register to most viewers. The skies in the original "glory shots" of the American West were so gloriously white because the photographic chemistry of the day was very deficient in rendering blue. When Ansel Adams interpreted the same scenes, somehow the sky became increasingly black - it wasn't bad exposure, but it was dramatic, and it became such a convention that it finally didn't look "wrong." 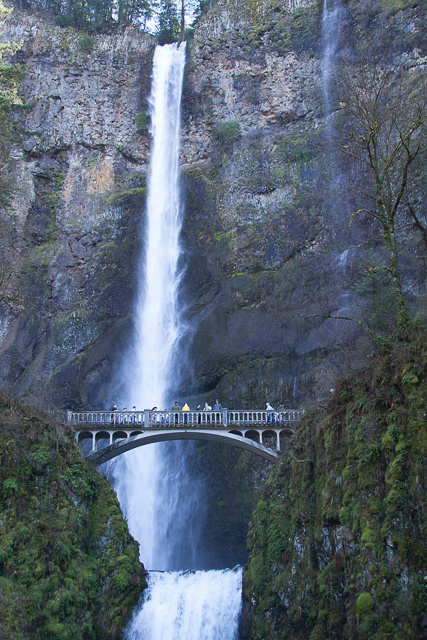 My modest rendering of Multnomah Falls is now in almost 500 homes around the world, mostly as a 4" x 4" photo coaster under someones drink. Why is it mine? Well I took it on one of the many trips I've taken out there, accompanied by family and friends and several thousand other people that day. Anyone with a camera has taken something like it, but I'd like to think that my particular interpretation strikes a chord somewhere. 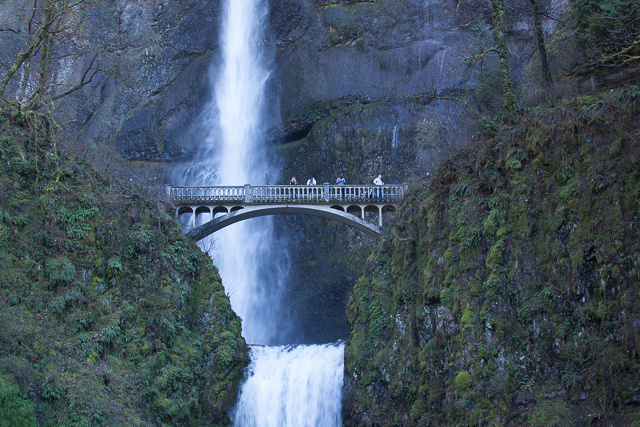 It is timeless. There are people present to provide some scale, but no one is recognizable, even to themselves. The alledged subject is Multnomah Falls, but since I've left out most of the waterfall, the tallest in Oregon, you could speculate that I'm relying on viewer's memories to fill in the "truth" they actually saw on the scene. Or has the subject become the man-made intervention, the wonderful bridge that crosses the falls at the intermediate pool?  As usual, at least for me, I've concentrated on a small sliver of the scene, rather than the entire panoramic view, which in this case would be a vertical panorama. I actually like vertical panoramas, very Japanese screen-like, but I chose not to go that route this time, for several reasons.The most basic is that everyone does it who can, thus making my potential shot even more identical to every other one in history. I mean, that waterfall is way tall. 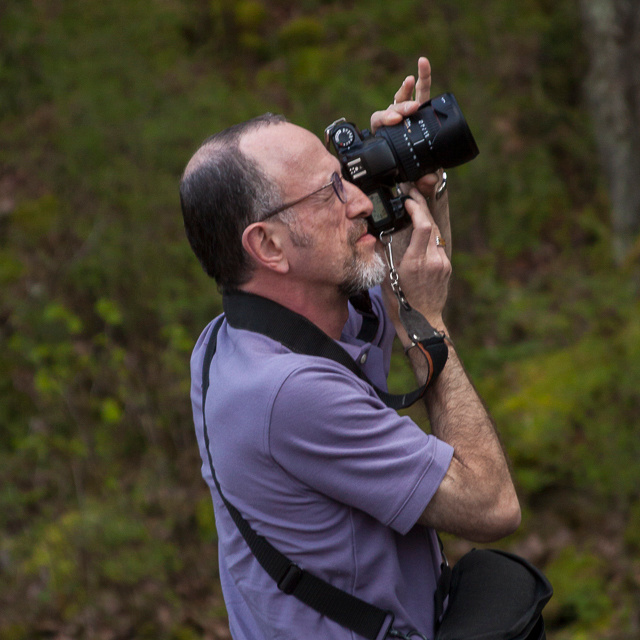 I took a portrait of my old friend who was visiting and most certainly taking the same image of the falls - but just a little different. 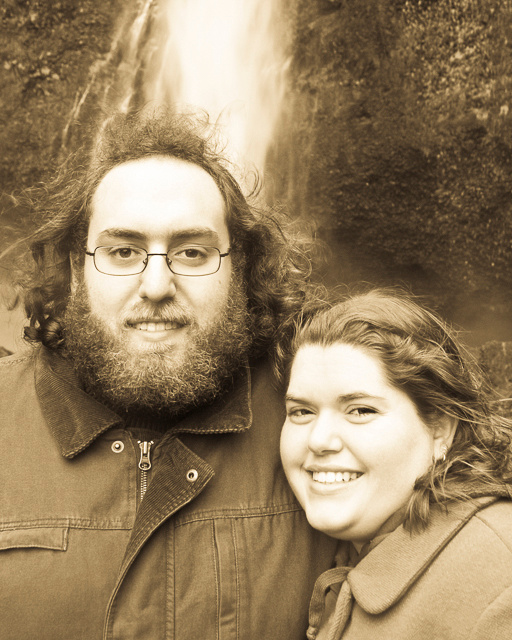 Another Multnomah Falls portrait taken that day - but processed so that a young couple, my son and his wife, appear as "Ma and Pa" passing a landmark on the Oregon Trail.

The other problem, besides sheer boredom, is that the wide angle view almost always diminishes the awe one feels in a breath-taking landscape. In the attempt to "take it all in", the actual subject of the shot, what caused the "wow" in the first place, is so reduced in size that the photographer is unavoidably disappointed, even if the viewer doesn't know what they are missing. In my view at least the viewer is now looking at the bridge, which they might have even stood on (it's only about a ten minute hike), but they can appreciate the scale of the bridge, and "remember" the rest of the scene without seeing it. And if you don't think that bridge is important, google an historic image of Multnomah Falls before the bridge was built, and you will understand. Oh, by the way, I don't own a wide angle lens, so I can't take the usual image anyway, but one of the reasons I don't own such a lens is that I know my view of the world isn't oriented in that direction. 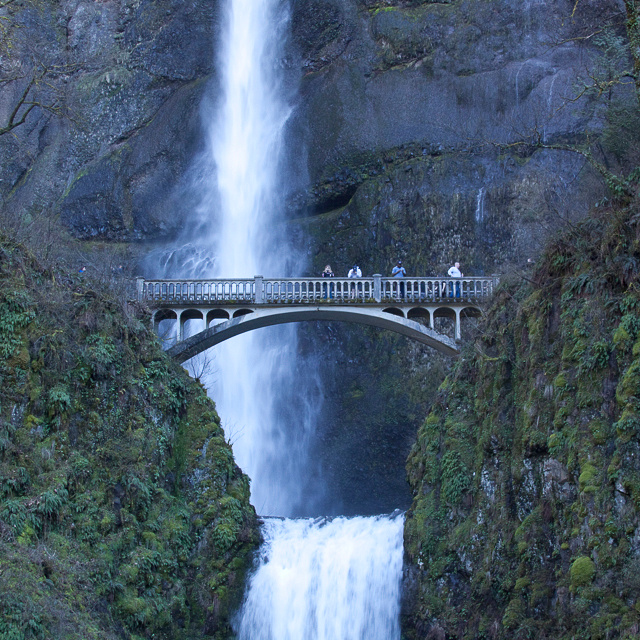 The image is square, like the vast majority of my images, mostly because I make photo coasters. God declared that coasters must be squares (or God forbid, circles) so the square crop became required, even though I can claim that I actually liked it before I made my first coaster. Some photographers even suppose that I am a long-time Hasselblad user, a Swedish medium-format square frame camera that was responsible for the views of Tranquility Base on the Moon. I only wish this was true, but a digital version costs more than all of the cars I've ever owned, combined. And if you are going to take a partial view of a very tall subject like a waterfall, it probably helps to make it square, rather than just a vertical that comes up short. 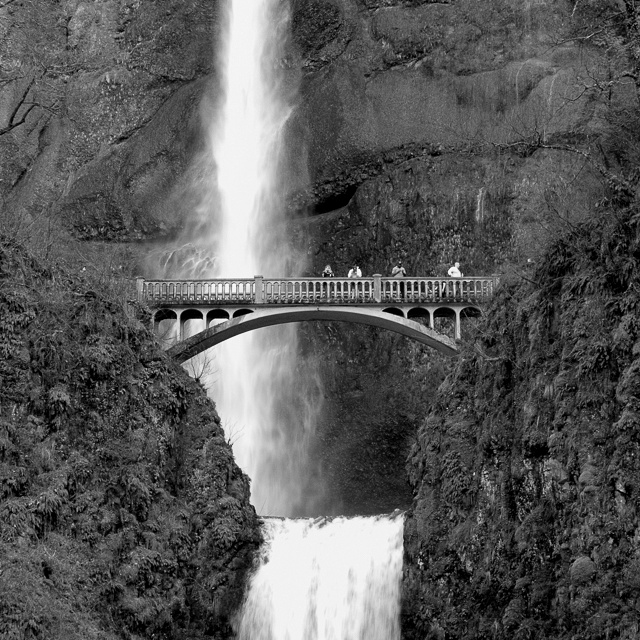 The Coaster Lives! And I sold a metal print of it yesterday!

Finally, my image is in black and white because I liked it better that way. The bridge was getting lost in all of the green. I could realistically manipulate some of the tones to balance out the image, which usually fails in color but is more than acceptable in monochrome. The image is now more abstract by removing the color, further from a snapshot, and now a more acceptable purchase, because the customer doesn't have one like that. And I can even maintain a certain artistic arrogance by not having a version in color, even though you wanted one. Of course my customers don't know that some idiot (me) lost the original color file, so the obtuse businessman they are dealing with couldn't even satisfy them if I wanted to. I JUST FOUND IT! 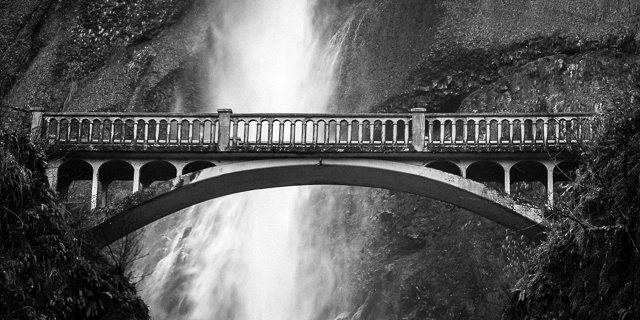 A year later I went back to the falls and somehow managed to stitch together three photographs for a twice-normal wide angle view - and still concentrate on the bridge! You can't keep an architect from contemplating the built environment, even in the midst of such natural beauty.

But the dirtiest little secret of this entire affair is that of course the reason this image is around the world is because of it's subject. Just because photographers want people to buy their images as artistic creations doesn't mean they aren't drawn to a certain subject. My Multnomah Falls might be better or worse than your Multnomah Falls, but they are still both about a beautiful waterfall. As Scott Kelby says, if you want to take more interesting photographs, make sure to stand in front of more interesting subjects. Only then can you interpret the scene that might be worthy of your efforts, and possibly of interest to someone else. See you at the falls.