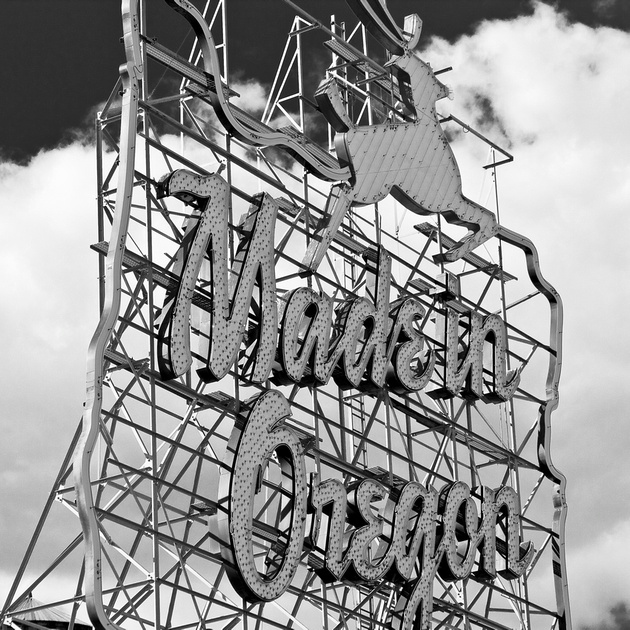 Today I would like to discuss what I call the "graphic" image. I do not mean images that are NSFW (not safe for work). I would describe a graphic image as one that is so direct in its content as to easily allow multiple interpretations without changing the essential meaning of the image. These interpretations are thus a matter of aesthetics, and while you or I might like one or another better, there is no "right" answer, and a lot of freedom to experiment before one goes off the deep end. Graphic doesn't necessarily mean "minimal", another category which is similar; but graphic images do not require the level of simplicity (or if we are being critical, meaninglessness) that a lot of minimal images exhibit. And I am a fan of minimal images! I think you know a graphic image when you see one because you instantly see how easily it could be manipulated without actually changing it.

This image is one of the most taken and iconic images in Portland. I hesitate to estimate how many exist. I myself have taken this shot, or something very similar so many times that in contrast to most of my photographic zen moments, I remember this shot as more of a concept than an actual photographic event in my life. In fact I have told so many of my customers at Saturday Market where to stand to take this exact shot, or had to wait while loading my car so somebody else could take the shot, that these instances have further clouded my memory of actually creating this photograph.

This image of the "Portland Sign" is now an historic image, in that this shows the sign in one of it previous incarnations. I took the photo in 2010, about a week before the sign was changed. The sign, probably one of Portland's first experiments with a big neon sign, was originally made for Domino Sugar, and somehow the outline of the state was periodically "filled" with neon sugar to amuse Model T owners on their way over the Burnside Bridge. The sign then passed to the White Stag clothing company, which removed the sugar and added the prancing deer to stake their claim. After the Second World War ownership of the old warehouse under the sign passed to Bill Naito, recently returned from internment camps for Japaneses citizens and subsequent volunteer service in the US Army in Italy. One of the Naito family's entrepreneurial efforts became a chain of retail stores that sold products "Made in Oregon". To promote the store, and Old Town, where he had purchased many run-down buildings, saving an entire neighborhood from continued demolition, he changed the sign again. By the way, any time you see a gold-lettered building in Old Town, it was one of Mr. Naito's; there are a lot of them. 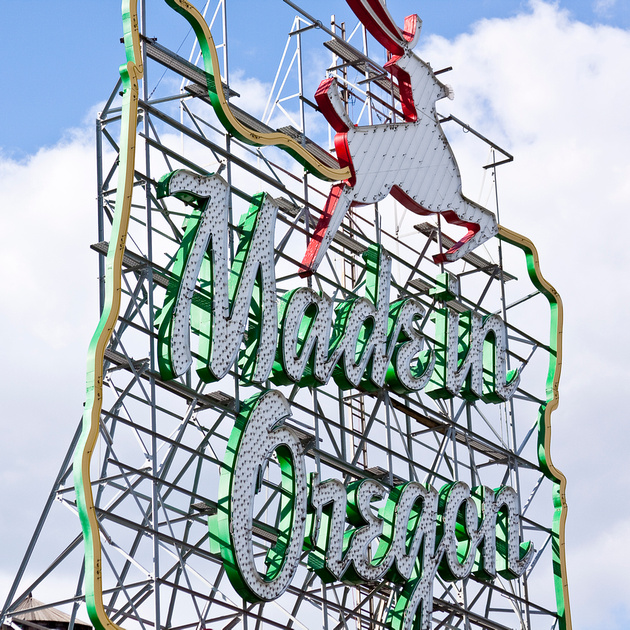 By the time I took this image, the sign had become so iconic that most people had forgotten its commercial origins, and considered it a state symbol rather than a private billboard. It had become something that just "was", like the "Citgo" sign that most baseball fans know as a symbol of Boston and Fenway Park, even if they have no idea that Citgo is an oil company. The "Made in Oregon" became so beloved that I don't remember how many prints I have sold that were destined for nurseries of proud Portland parents. I do remember how many times young ladies would suddenly show me their tattoos of the sign on body parts I normally wouldn't have been allowed to view. When Mr. Naito died, the University of Oregon did a very nice job in reviving  the old warehouse as the new location for its architecture school's semester program in Portland. Then talk began on what to do with the sign. When the university broached the notion that "University of" might replace "Made in", suddenly people began to pay attention. And it was not just Oregon State alumni. Most Portlanders asserted their ownership, despite the fact that the real ownership, maintenance, electric bills, and whether the sign was actually part of the building below seemed to be lost to History. In the end, the reasonable compromise that replaced "Made in" with "Portland" was agreed upon; I don't remember how the legal issues were resolved, although it is obvious that Portland, rather than Oregon was the big winner. The State kept its outline, and the deer still romps above Old Town.

Now let's talk about my image. As usual, I go a little tighter than most, looking for some pop. I ignore, or am not cognizant, that I have cut off some of the sign. It was a nice day, with a bit of blue sky surrounding the usual clouds. The sign's painted colors are recognized even though the neon is not yet turned on. And yes, the sign is on a jaunty angle, but that is more due to my location five stories below than any artistic strategies on my part. I did choose the framing, the time of day, and managed to hold the camera still, but I dare say that this is just a nice snapshot. And it isn't even the only one available as a photo coaster, although in that category I feel it reigns supreme.

The monochrome version is a different animal. The level of abstraction is now paramount, even though it is the same picture. By removing the color, I have now emphasized the sign as a steel structure; the framework is now more important. Of course the power of print recognition in our brains make sure that the lettering is still easily recognizeable, especially due to the contrast with the lighter clouds in the background. I think I could argue that the lettering is actually clearer in the black and white version. This image is not just de-saturated; I worked pretty hard to make that blue sky as black as possible, which the conventions of monochrome allow even though we "know" that the sky is not black. I won't show you the many different monochrome versions possible with just a few moves of the Lightroom sliders; this is just the one that I chose ten years ago.

Let's look at several other versions of the sign I've made over the years: 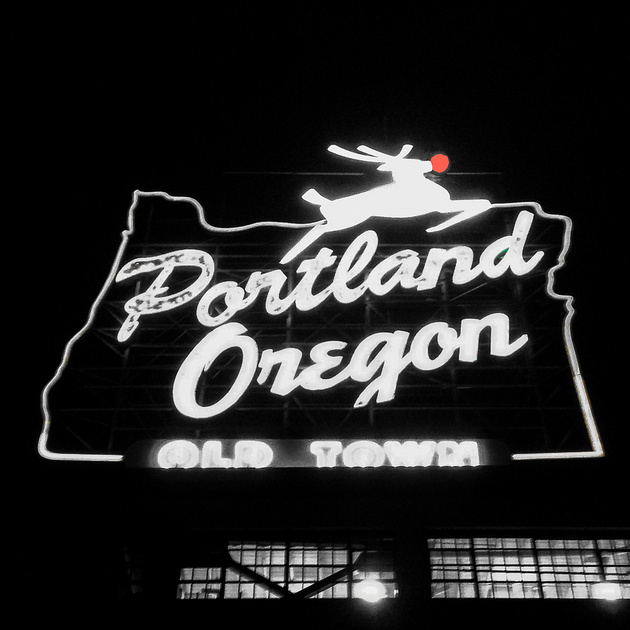 A few years later I finally got around to taking the sign at night with my cell phone while I packed my car after Market. I was even closer, on the street instead of in the park. I converted again to black and white, since I felt all of the colors just confused the issue. I moved the exposure all the way to the left, rendering everything but the neon as completely black, since I wasn't at all interested in the warehouse and especially the obnoxious "To Let" sign that is covering the upper left portion of the left industrial window. The red nose that I brought back from the original color version and then saturated, is another part of the sign's tradition, since in December the deer magically becomes Rudolph for Christmas. 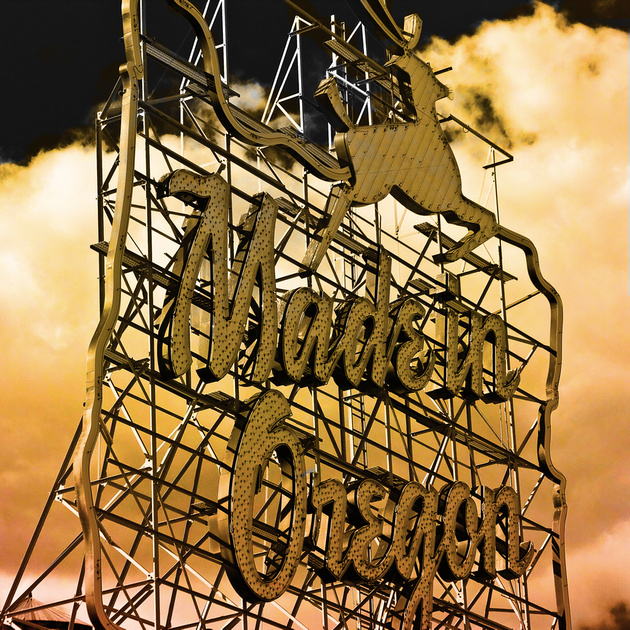 As part of the "Icons of Portland" series.

Recently I tried experiments with using gold leaf to try to create "individual" prints to sell my images as "one of a kind". This is a common dream among photographers, who search for an answer to the question "is this an original?" No it is a photograph! My usual answer to customers is that if they add three zeroes to the price I will eliminate my ability to make further copies; no one has taken me up on the offer. In any case, I have ended up just using layers in  my computer program to add the "gold leaf". 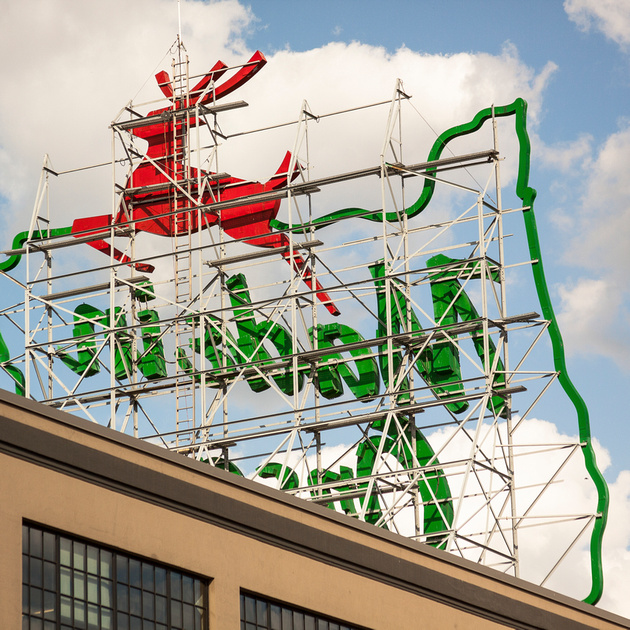 Note the power of lettering - again unlit, and now backwards, but still recognizable! 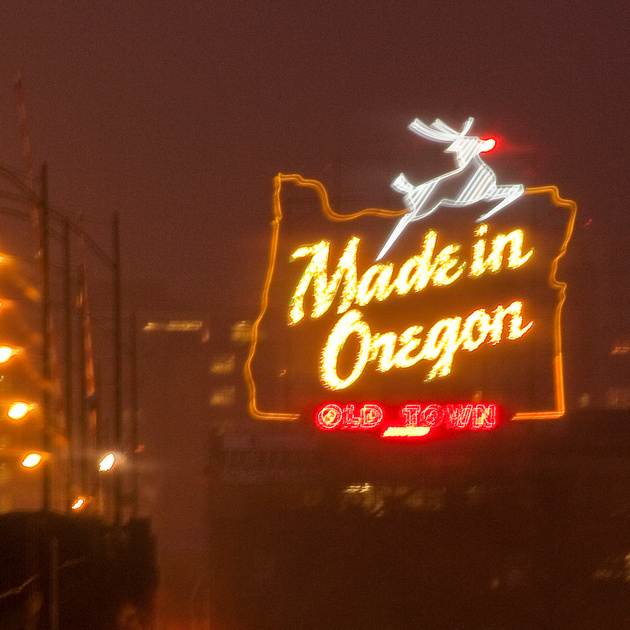 RUDOLPH IN THE RAIN

A rainy Xmas a few years before.

A few years before I took this image on a nasty December evening, as I shivered on the Eastern end of the Burnside Bridge. I actually think this the best place to take the sign, at least pre-drone. It illustrates that focus and camera shake cannot ruin an image, as long as you "get the shot". On the other hand, I am now too smart to be out in the rain, by myself, on a cold December night, despite the attractions of a color balance that is clearly not of this world. I leave this kind of image now to the young guns. 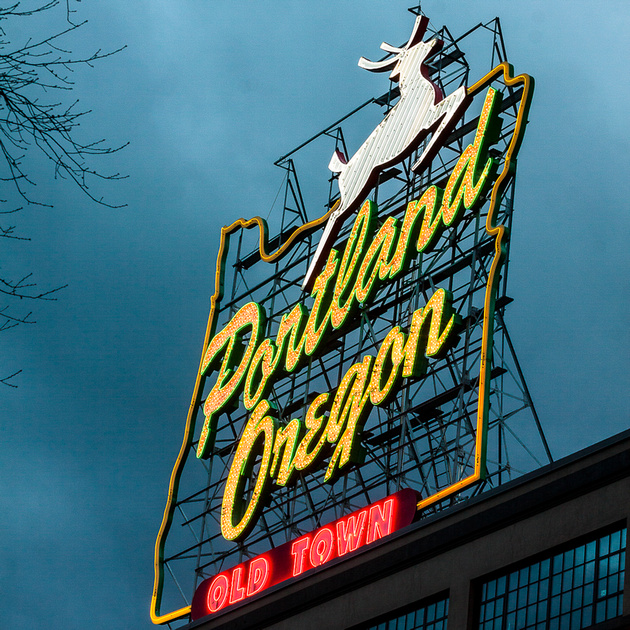 At some point my status as the worst businessman in Portland was finally overcome and I took another goodbye shot of the current version of the sign for visitors that didn't believe me when I said that my usual image must be of a different sign. I took this at "blue hour", the theoretically "best" time to take urban landscapes, since the city's lights have come on but the sky is not completely black. This shot is actually harder than you think, because the sign goes through a series of different colors and flashing states, so that for me this is an "action shot".

So there you have it. A final word on the need to try to take an original version of a subject that is so iconic that it resists interpretation. It is worth a try, since its yours. And if somebody says that it is illegal to take an image of a public sign that is literally ubiquitous, that is somehow beyond the bounds of a photographer celebrating his city, well tell them you'll see them in court. I live in a city that actually "signs" its skyline, so that it is actually hard to try to take a photo of Downtown without actually including the sign. To say that it this shot is somehow out of bounds is actually begging for a Supreme Court case. "If it please the court..."