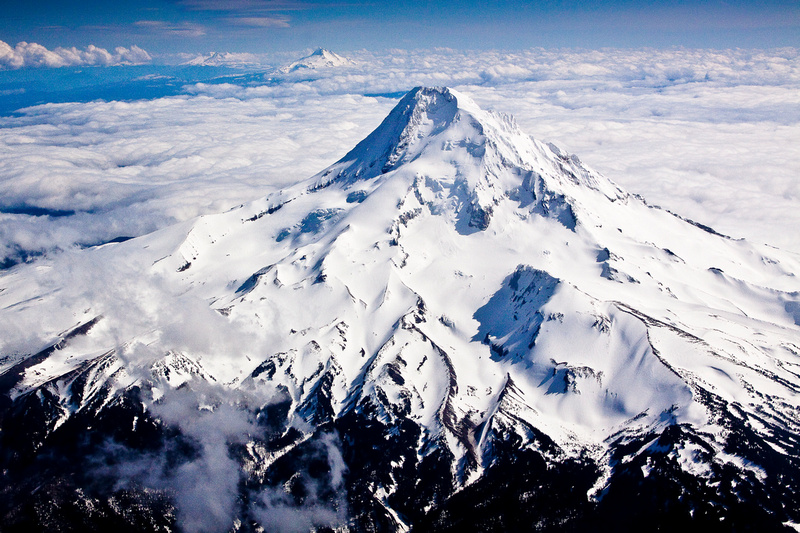 I would like to discuss what I call photographic luck, which is embodied in an image which is clearly influenced by a conjunction of circumstances that include a large quotient of "luck" surrounding its capture. Every photographer has taken some images that to one degree or another has seemed "lucky", which usually include both outside events and their grace in humbly conceding that they took advantage of those events to capture a compelling image. These "events" can include anything from a pedestrian entering a shot at just the right time, to an animal making any appearance at all, to the clouds suddenly parting over a landscape, to the briefest smile on your toddler's face. The photographer then has to take advantage of the "lucky break", as well as learn how to increase their "luck" by planning to duplicate it in the future.

Photographers have wrestled with this concept for a long time, because most photographs are not created out of whole cloth, subject only to the whims and control of the photographer in the studio. They have reacted to luck in many ways. These range from the humble, and fatalistic, mantra of "F8 and be there" - ie., just show up ready for anything, to those photographers who try to pre-plan everything, now equipped with apps that will tell them when and where the moon will show up over Stonehenge, just like the Druid priests of old. And the same photographer will both acknowledge their "luck", while proclaiming their ceaseless attempts to "make their own luck". in explaining the "lucky shot", they will resist some of the public's belief that every shot is lucky, while flatly stating that they caught that serendipitous moment simply because they had been taking photographs "before you were born". The truth is obviously somewhere in between.

Now let's get to talking about a certain mountain of my acquaintance. I captured this particular moment on a flight back to Portland eleven years ago, and it has been one of my most popular images ever since. "Coming Home" came to be for a number of reasons. As usual, my wife and I made seat reservations with the hope of securing an empty middle seat on our cross-country flight. As we assumed our positions, and hoped against hope that they would close the cabin doors already, I noticed that the window next to my wife was the cleanest, clearest, positively virginal airplane window I had ever seen. I reached up to the overhead, grabbed my camera, and successfully entreated with her to take the aisle seat instead. I had visions of mighty rivers, skylines, deserts and other assorted topographic phenomena filling my image ncard all the way home to Portland.

In the years since I have done my personal reconnaissance on every flight, and have found that most planes seem to have one or two "newer" windows; obviously it's the luck of the draw. All you can do is reserve a window seat, not over the wing, and on the "right" side of the aircraft, depending on your photographic target. Inevitably your window will be as cloudy, foggy , and scratched up as usual. A few years after this flight I spied another great window which would soon overlook our mountains to the north, revealing a sister shot to my own, but it was across the plane and three rows up - and if I had gotten up, and announced that my fellow passengers must move aside because I was a "professional", we would have diverted back to Portland and I would soon be a "professional" in the hoosegow.

So I had my camera at the ready, I had my telephoto zoom lens on (the only one I own), and over the next five hours I waited. I knew that my lens hood would cut off a certain amount of glare, and that I would have to try to not touch anything, especially the window. Despite years of Kung Fu training, I could not levitate, but I could try to avoid the plane's vibrations as much as possible -don't touch that window! 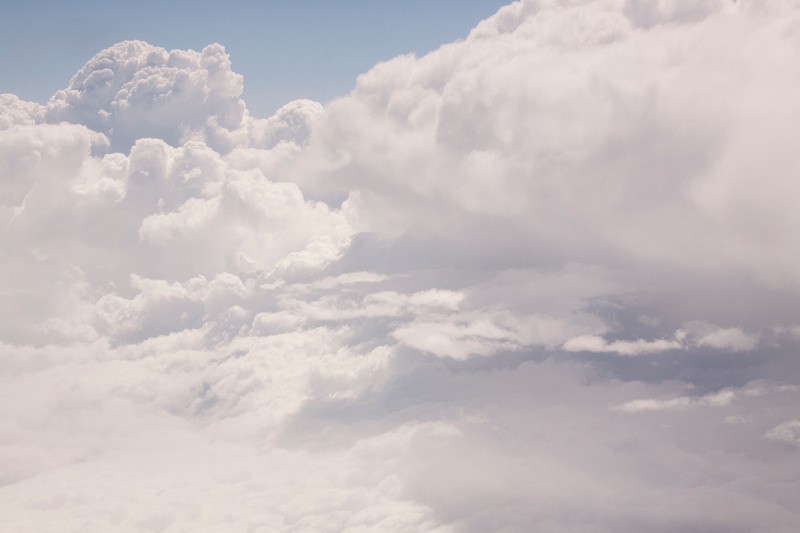 OK, you are in a plane, these are nice clouds, but so what?

This was about as good as it got all the way across the continent. The seat-back map just showed me what I was not seeing while we traversed the country. What a bust. I could claim that I was at the ready the whole trip, but my frustration gradually led me back to pretzels and my novel. I gradually gave up, and then the captain announced we would soon be beginning our landing approach. Then the skies parted, the music came up, and I tried to control my excitement. 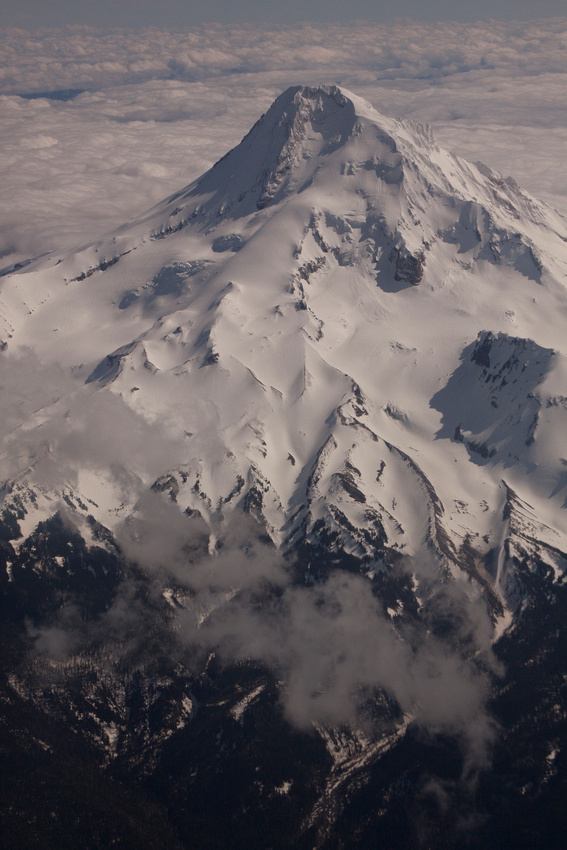 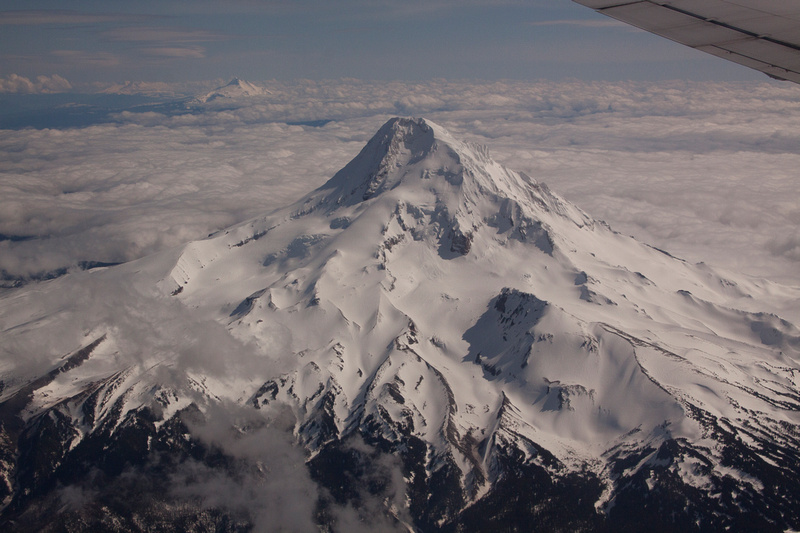 Well OK, but I've got to get rid of that wing. We can't have people knowing we we on a plane, can we? So I proceeded to snap about another dozen frames as the plane moved towards Portland. I of course remembered taking a lot more images than I actually did over the next minute or so. Part of the problem was that it actually was a pretty bad day down there, so as we went along we were headed towards the clouds, and I gradually lost the mountain to the cloudy horizon. But I did get rid of the wing.

When I got home I surveyed my shots and found only one or two had been successful; it was only then that I realized that I had captured three mountains, since I had been so focused on Mt. Hood. Hopefully the pilot was about five miles away from the peak, which meant that Mt. Jefferson was sixty miles away, and that the Three Sisters were another sixty miles beyond, just peaking above the clouds. 125 miles in one photograph, and I soon made some changes in post production to deal with the problems that I discovered through research that affected most aerial photography. This image predates the "de-haze" slider in Lightroom (I'm too old-school to subscribe, so Lightroom 5 suffices) but I used the dual strategy of brightening the exposure and subtly increasing the saturation to achieve the same ends. 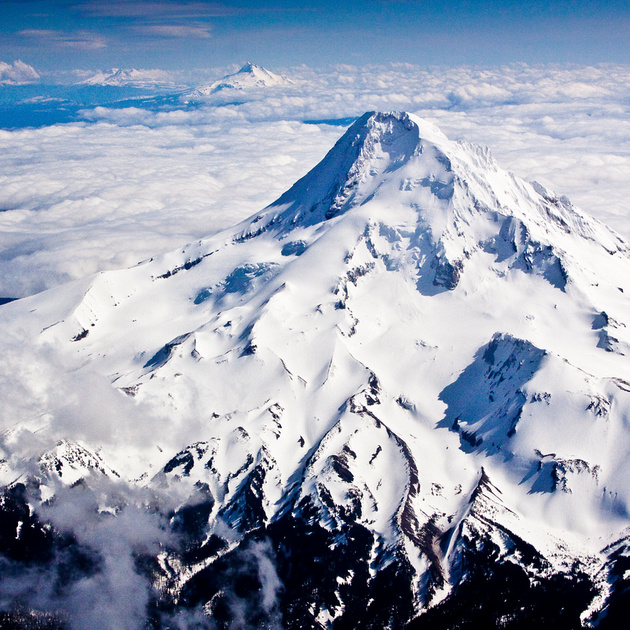 Fortunately the mountains are part of a range, so that the square crop required for my photo coasters still managed to keep all three mountains, just osing a little foreground and Mt. Hood's flanks. Over time, and familiarity, I gradually grew more accustomed to the square crop, and have sold about 449 coasters of this image in the last ten years, as well as many square-crop posters. 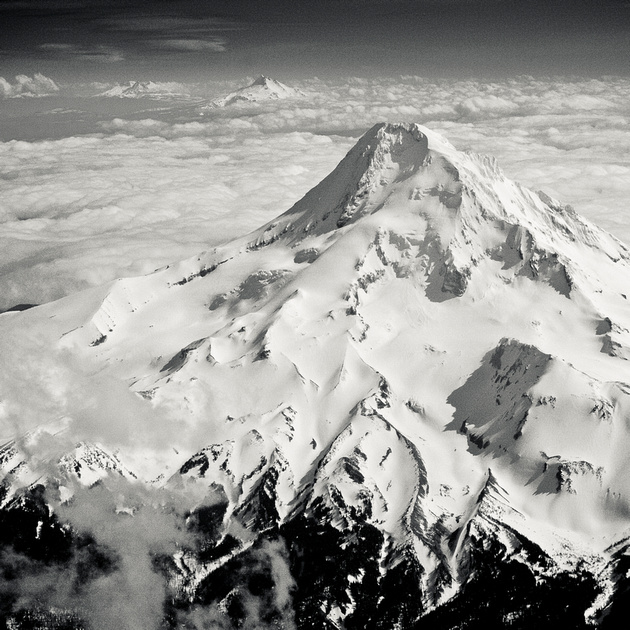 I also tried to evoke Ansel Adams with this monochrome version. I like the way it treats Mt. Hood, but I do admit that the other mountains suffer in contrast without the blue skies above the clouds. 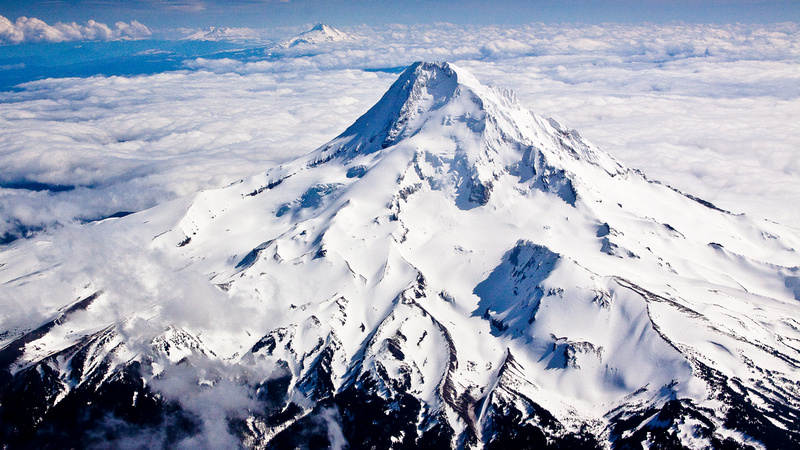 Over those same years I have "lost" several metal prints to my own clumsiness. The only way to really damage a metal print is to drop it on concrete, and have discovered unbelievable ways to drop this print and others while at the market. Recent debacles include an heroic sneeze, as well as hitting my head on a table while getting up from below said table. I try to save such metal prints by suffering jibes from my printer while he nobly tries to crop the damage away. This 16:9 crop, the old Hasselblad Xpan panoramic camera ratio, is about as far as you can go before you lose too much foreground or heaven forbid, lost the the upper peaks. A 1:2 crop, which is what I usually use for my panoramic images, is just a little too wide.

This image has always been popular. It is one of the "billboards" in my booth, drawing in appreciative crowds, despite the ubiquity of Mt. Hood images in the ether. But I have discovered that it actually sells less than you would think, especially in heroic sizes. The only people who feel absolutely "compelled" to buy fall into two camps - those who have actually stood on the summit, and those residents who are about to leave town forever. These market segments are actually smaller than you might think; it doesn't help that most Portlanders are actually not used to this view of the mountain, since we see it from the West. I've had people actually argue with me, and it is constantly amusing to hear men mansplain to pretty young companions about the identities of these peaks that betray their ignorance of basic compass directions. The only thing scarier is to hear guys point out their climbing routes, since climbing the North slope shown here requires actually risking their lives. The wildest story I've heard was from the couple who bought my image in the late afternoon because they had climbed down from the summit of Mt. Hood that morning! And to think that some people think I don't meet the needs of my public. 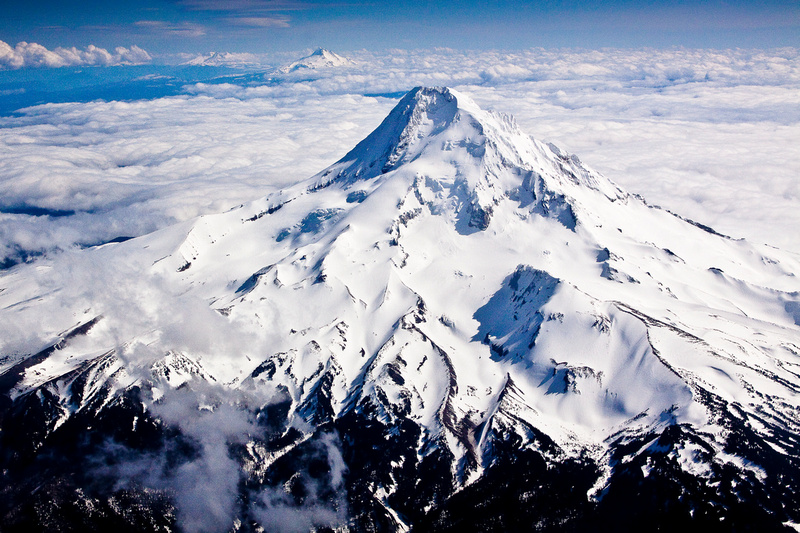 Last thing - I would like to recommend a photo book very relevant to this post. Julieanne Kost, a long-time Photoshop guru and part of the software's development team, has written what I feel is one of the best essays on photographic creativity I have ever read. It is entitled "Window Seat - The Art of Digital Photography and Creative Thinking". In it Ms. Kost, who has accumulated far too many air miles, exhibits her many window seat photos and more importantly discusses the pursuit of photographic projects in general.