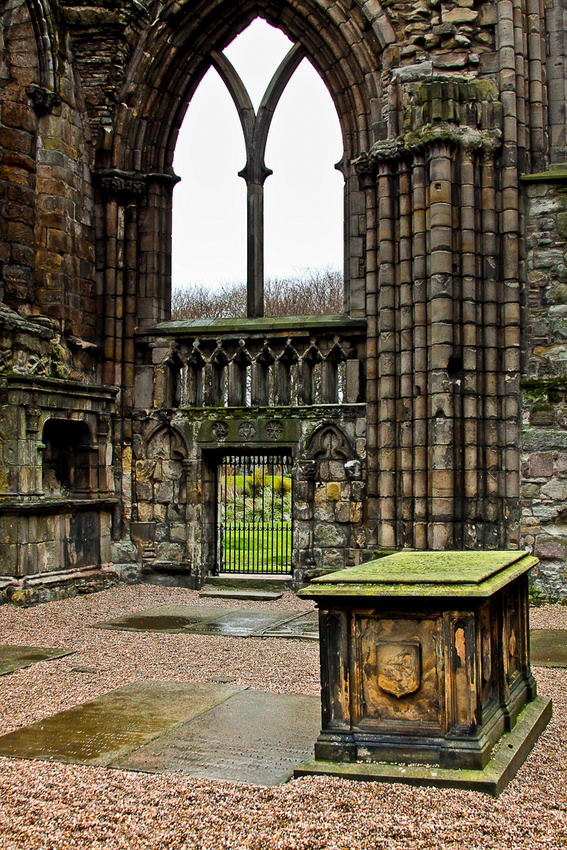 I have been lucky enough to visit Edinburgh on two occasions, once as a college student, and then again more than thirty years later when my son was finishing up his turn at a semester abroad. On both trips we didn't get to the Highlands because it was snowing, and the days were already short enough without venturing further North. This past year our chief Covid disappointment was that my wife had to forego spending a month with me at an isolated cottage on the Isle of Skye for nearly a year isolated in our bungalow in Portland.

Edinburgh is an absolutely delightful city for anyone who is not from Glasgow. The sense of history is constant, far beyond the usual castles and churches and what not - what can one say about a city whose "New Town" neighborhood is from 1815? My first trip included delights such as walking the Royal Mile and having my pick of the nicest sweaters that I had ever seen that were literally piled on the pavement outside of the shops. I also discovered a "magic telephone" for the first and last time - I joined a cue a block long at a phone box which somehow allowed all of the backpackers present to take turns making long-distance calls overseas on Her Majesty's dime, or whatever. My girlfriend, now my wife, was suitably surprised at hearing my blubbering as well as the entreaties of the bloke from South Africa behind me to get on with it already. 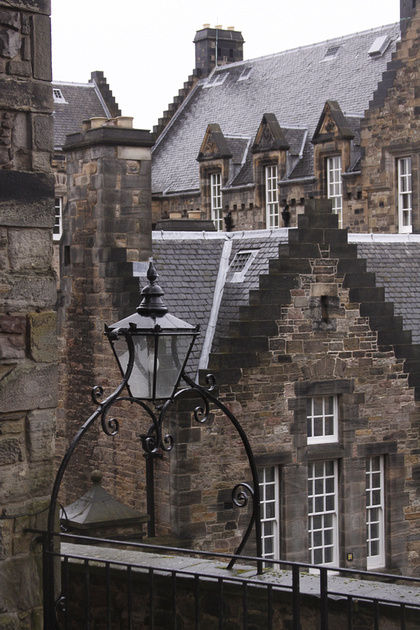 "Slate and Stone" - a view of "Old Town" from the castle.

When we returned in 2008 the city was even more charming to me because the scale was almost exactly the same as Portland. In fact if you change the beltway interstate around Downtown Portland for the remnants of the Medieval wall around Edinburgh, you would find about the same boundary size around the two cities. We visited Edinburgh near the end of the year, so we could experience Hogmanay, a Scottish rite that seems to combine Christmas, New Years, and Mardi Gras in one spasm of urban debauchery. We also got to stay in an apartment in New Town across from a park, with fifteen foot-tall ceilings, that I told the anxious landlord "would do" for the 100 pounds a night. We had a wonderful week. 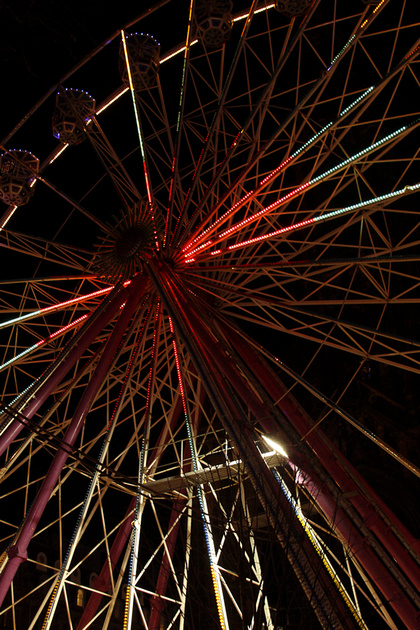 Downtown Edinburgh during Hogmanay. Don't stint on the drink.

One of the highlights of the week was a visit to Holyrood Palace, at the opposite end of the Royal Mile from the Castle, where out tour guide had uncorked his well-rehearsed tidbit that the dungeon had welcomed many traitors, including one John Paul Jones, as guests of His Majesty. Holyrood Palace is the Royal Residence when the Queen visits The North on the way to her favorite castle, Balmoral, in the Highlands. We joined a tour of the place available when the Queen is not around. I must say that the Palace was not terribly impressive, especially the interior, which seemed at least to this observer as dowdy if not run-down. I snapped a photo of a nice central courtyard, which could have been lifted from a college campus, especially an exclusive college campus. 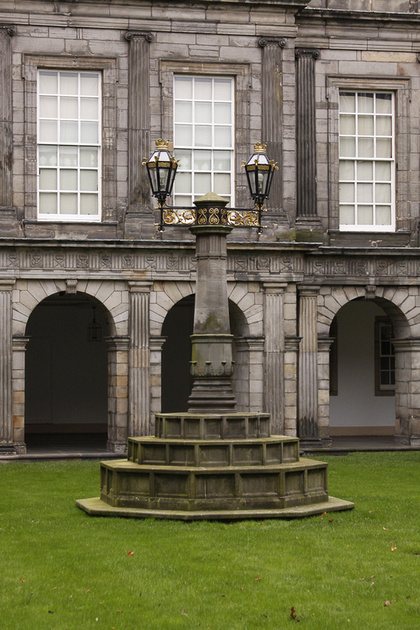 But on the whole, I was unimpressed, and was taking a turn through yet another corridor, when I encountered an unsigned black door. I'm an architect as well as a photographer, and one of the unwritten rules of professional conduct is that until someone objects, you have the run of the place to "pursue your critical responsibilities." So I ventured to try the door, which seemed to be of the exterior variety, and rehearsed my surprise if an alarm greeted my insolence. I thought I might encounter another courtyard, a garden, or merely a car park. Imagine how I felt when I was suddenly alone outdoors here: 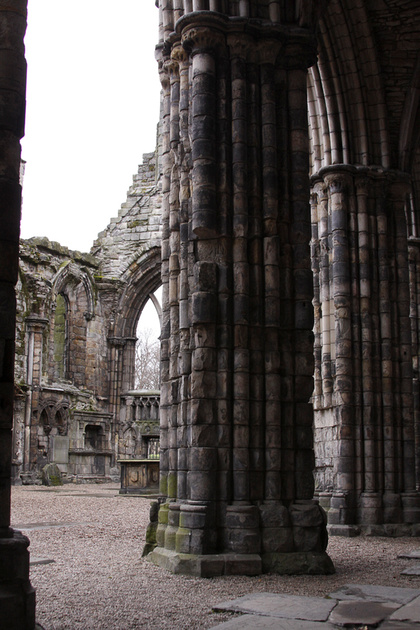 What have we here?

I had come upon the ruins of Holyrood Abbey, burned down by a religious mob in 1600 (I don't recall which sect was responsible). It was a strangely intact ruin, attached to the Place by that unmarked door, and while the roof and the windows were gone, I could stand under a porch and check out the place in the pouring rain. It's very hard to capture rain in a photograph unless that is your intention, but believe me it was coming down. As I moved around, I encountered what I considered this overall view: 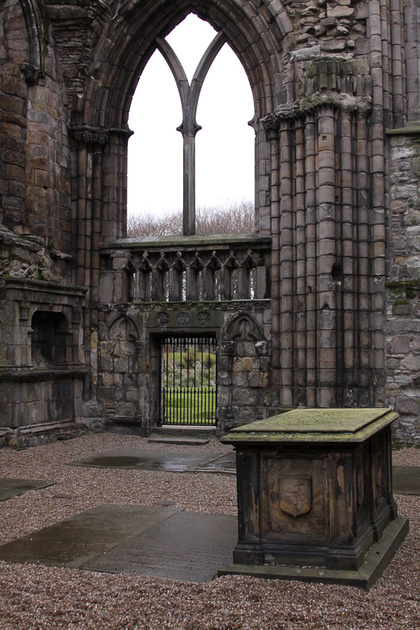 Of course I was impressed by the stonework, the remains of the window arch, and the tombs. I took a stroll and discovered that most were of Scottish Kings who ruled before the "invitation" to join England in the United Kingdom in 1707. But it was pouring, I was getting cold (my coat was checked), so I went back inside. Now, as a "professional" I can't believe that I didn't "work the subject" and these were the only two shots I took that day on my private excursion. I wish I had given the top of the arched window a little more room, but there you go.

I wish I could show you subsequent stages of post-processing, but having lost the "original" and thus lost the "history" of my editing (don't ask - just back-up, back-up, and then back-up again) I only have the first and last versions. This doesn't stop me from editing it again, or coming up with new versions, but it does prevent me from showing the process. 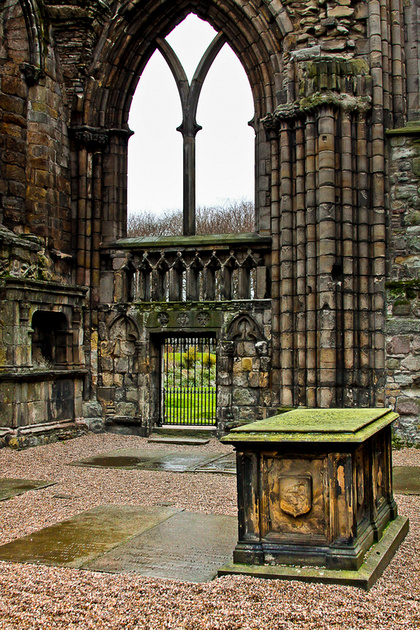 You can see that I increased the exposure to lighten up the mood and bring out some variation in the stonework. I also hopefully subtly increased the saturation a bit. This brought out the greens, especially the moss on the raised monument. I would point out that Edinburgh shares a climate with Portland - that green was there, and it was December 17th, after all. What you can't see in the shot is that I had to darken the sky a lot, since it was totally blown out. Since it was blown out, I didn't find any additional detail in said sky, but I at least gained some detail in the trees in the background. Sharpening helped a lot to bring out detail, especially in the stonework and the gravel in the foreground. Sharpening is very much to taste, although you can get better at it. The first thing you should learn, and most teachers forget, is that the first slider you should touch is the last one on Lightroom's sharpening panel - masking.  Press this slider, press the option key (alt on Windows, and why don't you have a Mac?) at the same time, and move the making slider to the right, successive areas of the photo will now go black, showing you what parts of the photo will not be sharpened, which allows you to concentrate on what you want to sharpen without fear of creating artifacts in those areas of more uniform color and uniformity, like the sky, where sharpening should be avoided. Then use that same option key trick when you move the amount slider which turns your photo's view to black and white. The lack of color makes it easier to see when you've gone too far, as does increasing the zoom to 100%, which can reveal artifact creation a lot sooner. As with diet, moderation is usually the best policy, although one must remember that every digital photograph requires some degree of sharpening because of the very nature of the digital process

I'd like to point out another thing photographers must avoid, especially when they significantly enlarge their photos. I've printed this image at sizes up 12" x 18", and it looks great at that size, if I say so myself. Especially since the native resolution of my 18 megapixel camera is in the 8" x 10" range. And I haven't even applied any up-sizing programs yet, so you can print bigger than you think. The trick again is to view your proposed enlargement at 100% on your monitor, because that is the level of detail or distortion that you will see in the final print at that size. If it is unacceptable, print smaller. On the other hand, as you get bigger, other faults appear. My customers always exclaim how colorful and sharp my photo coasters appear, because they forget that they are looking at 4" x 4" versions - 24" x 24" enlargements are a horse of a different color. And of course we are all guilty of "pixel peeping" to varying degrees, risking touching large prints with our noses while inspecting details when we can no longer recognize the subject of a print. It's another rule of Physics - perception of the whole for humans usually require a viewing distance at least equal to twice the diagonal dimension of a print. Remember when your mother told you to move away from the TV - she told you it was because of radiation, but it really was proper viewing distance. If I got a larger TV, I would have get a bigger house. I have printed one photo as 4 foot square tapestry (don't ask) and it looked beautiful, but only from 40 feet away, which makes exhibition in an 8' x 8' booth problematic at best. I finally achieved the billboard effect, where a billboard photo appears indecipherable if you get close enough to apply graffiti.

Another problem that can appear at larger enlargements is "chromatic aberration", where strange color lines appear at the borders of sharp changes of color in a photo. Your ridiculously expensive lens is supposed to eliminate these, and it usually does, but then physics asserts its primacy once again. At 4" x 6" OK; not so much at 12" x 18". This is only important if you've spent good money buying or printing the image without examination beforehand. 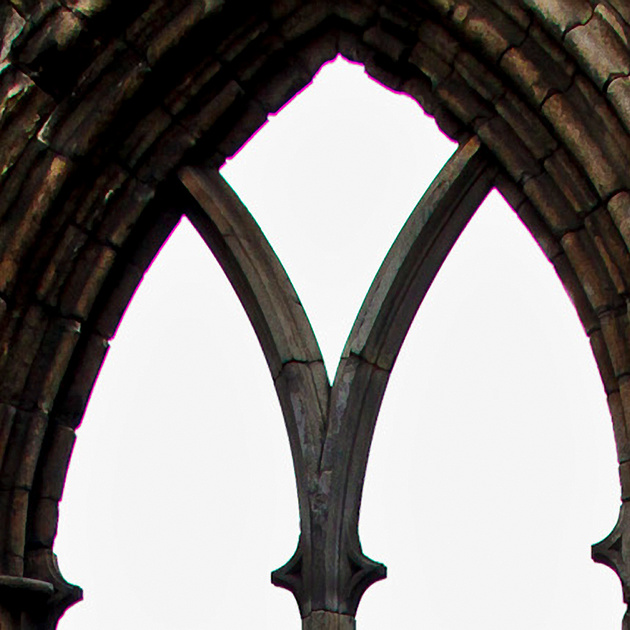 Now this is at 100%, so i am being picky - but not if I am printing this big. Notice those ridiculous purple and green outlines at the window edges? You've just spent $200 for a metal print and I daresay you would not be amused. 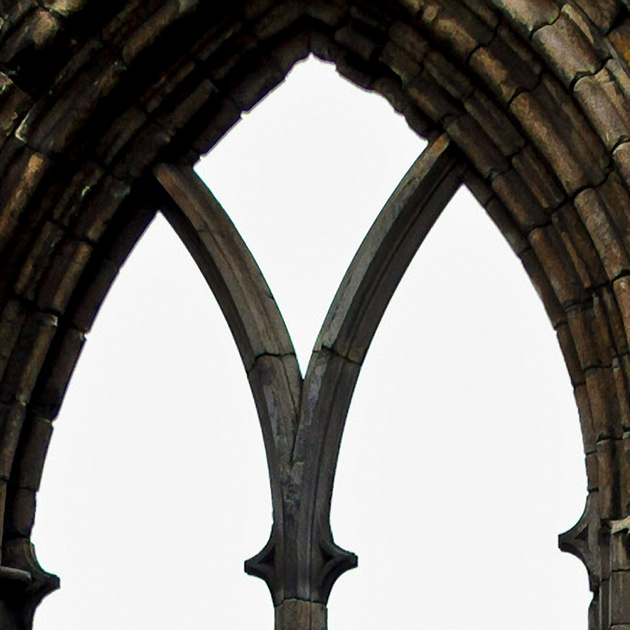 Manually corrected chromatic abberation has removed the purple lines. But what about those green lines? 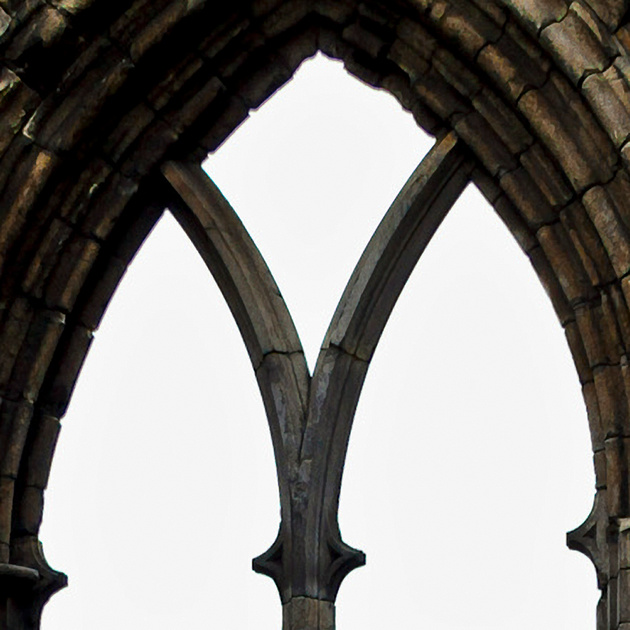 Ok, we've finally done it. Remember, at less than 1:1 at larger than 8 x10, you wouldn't have seen these at all. But don't you feel better?

This image has always been popular with my public. While it has not sold that often (it's hard to sell non-Portland or at least non-Oregon at Saturday Market) it is one of those images that does attract notice in my booth. And this is beyond the customers who wonder where they can visit this "local" site. While many people have been to Edinburgh, and some to the palace, I have only met one other person who has been in the ruined abbey - so my unsigned door might not have been in my imagination after all. Most viewers think the image positively oozes romanticism, but I admit I went into rare salesman mode when a customer inquired whether I thought the image would be appropriate in a funeral chapel. "Of course" it would, and then personally delivered a large framed print to the mortuary. 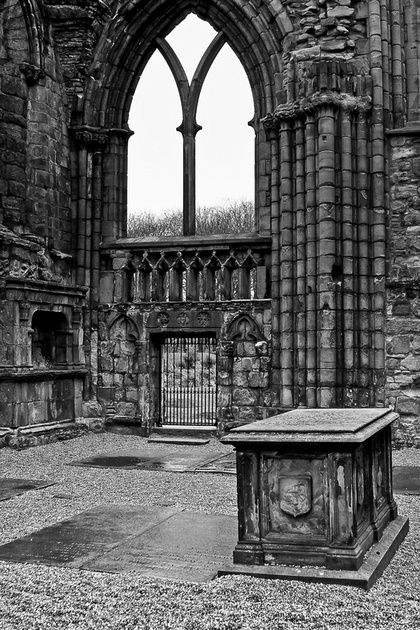 Finally, the black and white version, hot off the presses. We lose the green of course, but as usual monochrome emphasizes the forms, light and shadow, and especially the textures of the stone and the loose gravel floor.

So the next time you encounter a mysterious door, it might pay to see if it is locked. How are you supposed to know if there is a photo on the other side if you don't give it a try? 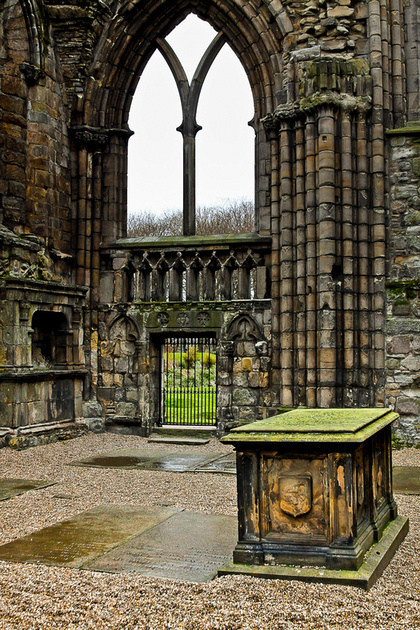