I'd like to discuss the topic of "working the scene." Photographers use this term in several different ways. Most of the time it refers to the admonition by experienced photographers to take some time to explore alternatives when  you encounter a subject that you initially find interesting. This could mean moving around for different framing possibilities, exploring alternative exposures beyond the "correct" one, changing apertures or shutter speeds, rotating for a vertical crop,or simply crouching or climbing to change the perspective. Since you're carrying  many expensive lenses in your camera bag, it could mean taking another one out. The overarching theme of all of these exercises is that your first take on the subject is probably not the most compelling one you can come up with, so don't go anywhere until you've exhausted the possibilities. Every photographer has a different capacity for this exercise before they move on to another subject entirely. This is most important in landscape photography, my specialty, (mostly urban landscapes) but it has its place in other photographic genres. You only take one portrait of a subject if you work at the DMV. Sports and nature shooters face the fact that you've got to shoot continuously to get the one shot you're looking for. But landscape photographers frequently drive themselves nuts looking for alternatives because so many other things are out of their control -  the time, the location , and the weather being the three toughest nuts to crack.

Now of course serious photographers, especially those who have convinced themselves (if not their spouses) that they're out to make some money, tend to consider themselves more responsible for everything. If it's not the right time of day, come back at the right time. If the light isn't the finest it could be, come back. Similarly, you've got to choose the best season. And of course the weather, which you can't control, must be dealt with. Pity the poor photographer who must deal with the fact that they have spent their first week in Paris, they are leaving tomorrow, and it's time to go to dinner. This is the reasoning behind one of my rules of photography - the best photos of an area are almost always taken by great photographers who live there. The rest of us almost don't stand a chance, because we are stuck with the current conditions - we can't easily go back. The converse of this rule is that each photographer best work is probably close to home. This is true even if you are not religious about "working the scene" because there will be subsequent visits even if you are not obsessed with the subject. Some of my best images have been "grab" shots - not because the building moved, or I was on a bus, or the light changed, but because my long-suffering wife "grabbed" me because it was time to move on. Even when I declare that as an architect I could be actually "sketching" the scene, she says that I should take that up with my next wife. 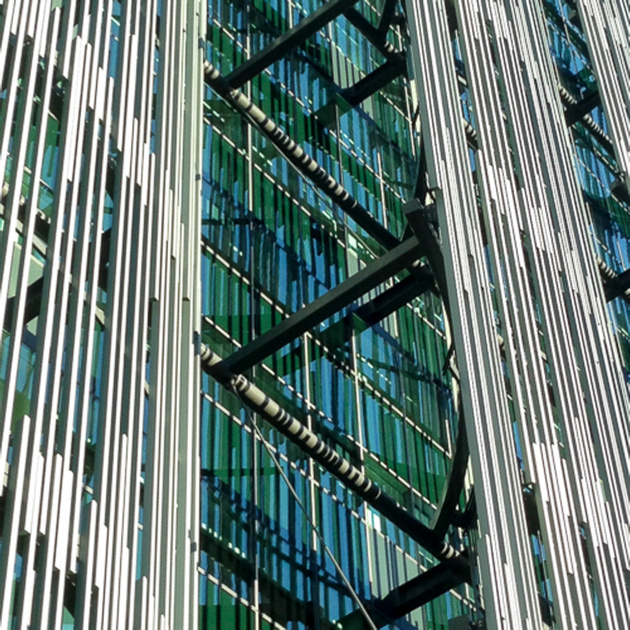 Another day, another take.

So let's open the discussion to allow for successive visits to the same subject, in a more or less obsessive desire to "get it right." You need to combine an attempt to learn something from your earlier visits with a desire to try something different. So it is with my various attempts over the years to come to grips with the remodel of one of the federal office buildings in Downtown Portland.

The Edith Green and Wendell Wyatt Federal Office Building (let's just agree on EGWW for now on, OK?) is named for two former Oregon members of Congress. The building, like a lot of modern Portland office buildings, takes up the whole of one of our miniature blocks Downtown. It was a grim concrete office building, so mediocre that I wouldn't remember what it looked like if you put a gun to my head. In the midst of the Great Recession, the poor federal workers who knew what it looked like won the lottery. As a "shovel-ready" project, the long-planned renovation was put to the head of the line; its parameters were then advanced so that it would be as extensive, transformative, and "green" as your federal money could buy. The result was truly extraordinary, and I think it was probably the best thing that came out of the Great recession in Oregon. The HVAC systems and the facades were brought up to 21st Century standards, and the building's roof acquired what is probably the biggest south-facing solar-array "hat" your likely to see to liven up the skyline. Since the building was still the same square block, with a new glass face, the most prominent aspect of the remodeled building became how to shade those new glass facades. The architects had a field day, and the three different shading systems ( you don't need one on the North facade) became the highlight of the design. The East and South facades were mostly under control, with external shades pretty standard for current office towers, although they make for a nice play of light and shadow and reflections. 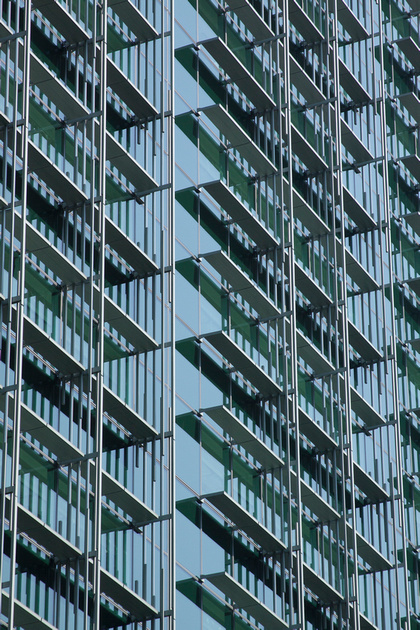 Extensive, but pretty standard, on the South Facade.

But the West Facade of the building was special. Let's talk about Western facades; they are critical in the Pacific Northwest, where the sun seemingly doesn't behave like it does "Back East" - and woe be the person who doesn't understand this when choosing an apartment or a house. As compared to the East Coast, it is pretty hard to overheat a house with too much glass in Portland, except for the Western facade. I say this as one who has done this twice, and as my wife frequently says "and an architect, too". Our first apartment Downtown was west facing, with a pretty view of the West Hills; unfortunately, the shades were permanently down from 2 P.M. on in a vain attempt to control the heat and glare. I then bought what can only be described as an example of a "stupid house" in Southeast Portland. Now we love our house, and it's probably the only correct economic decision we've ever made. It is a beautiful 110-year old bungalow; we're only the fourth family ever to live there, and we're not going anywhere. Its so prototypical of Portland that its almost a cliche, but it is on the wrong side of the street. Our garden faces west, and on the rare days when you want to enjoy it, it is literally impossible to sit back there. I was used to a climate where typically the day warms up to early afternoon, and then cools off. This is not our pattern - the sun takes forever to go down, and the hottest part of the day is the six hours where a western garden bakes until the sun finally goes down at 9:00 P.M. And an architect will tell you that western light is the hardest to control because horizontal shades have almost no effect as the sun heads almost horizontal towards sunset. Yes, you can roof the whole thing, or put up vertical walls, or plant huge trees or bamboo, but that doesn't seem to be a good strategy in a 25 x 40 foot garden. 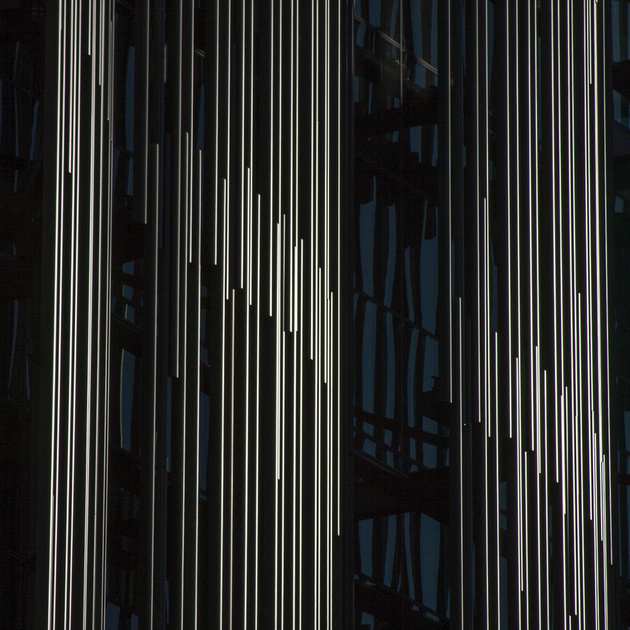 So I've shown you three version so the Western Facade, and you don't even know what the hell you are looking at. Am I obscure, or what? The Western facade sports five vertical sunshade arcs that run up and down the entire face of the tower, extending a dozen or so feet from the building. These arcs form a vertical trellis with irregular vertical lengths of aluminum fins. The structural supports that connect these arcs to the building look like they contain more steel than the building itself to prevent the wind from blowing them down. The result is a varigated swirl of  metal that covers the facade in an abstract pattern while allowing the office workers to see out, especially if they appreciate a forest of steel. The architects originally proposed this as a scaffolding for climbing vines to complete the green curtain, but I think they subsequently decided to restrict the greenery to the first four stories, because how the hell were you supposed to trim it further up? 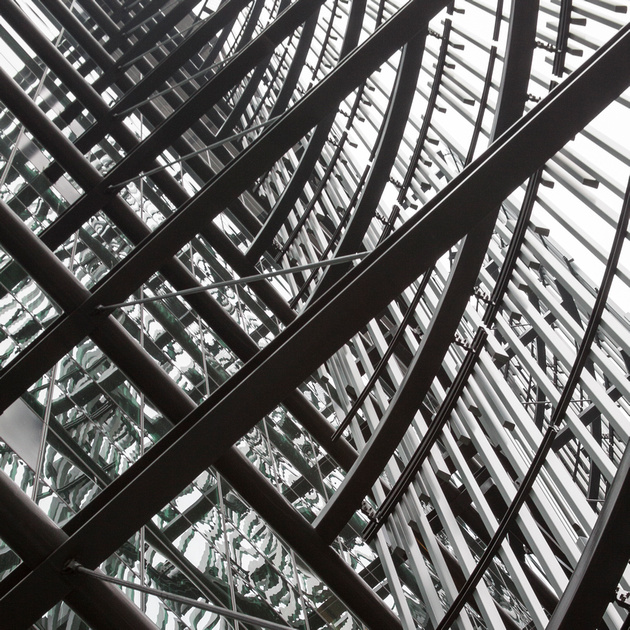 A view from below at the entrance entitled "Vertigo."

This view might provide more understanding of the complexity of these arcs. Due to the recent "difficulties" at government buildings, you might not be allowed to linger any more at the front door to get this vertical view. You can see that this is not a simple exercise in metal, and that even four different views don't begin to cover the possibilities. 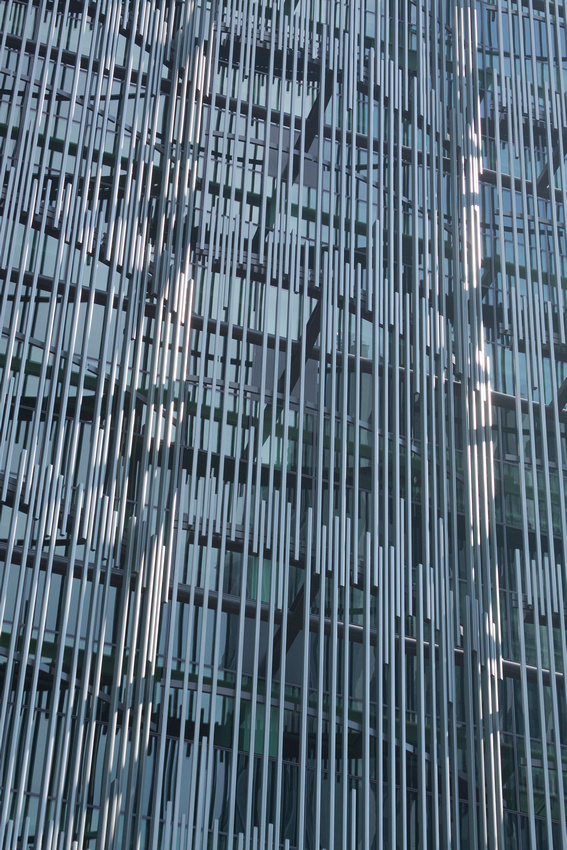 You can see that my initial take probably tried to control the highlights, and lower the blues to reflect a more realistic color temperature. The result was certainly more "green" although upon reflection it doesn't appear any more "realistic." The "coaster" square-crop doesn't seem to change much, since it's just a smaller portion of the same indecipherable facade. What's also funny is that my attempt to "straighten" the right verticals leads to even more skewed verticals to the left.

A few years later I decided to move my angle so as to show more support structure and thus more arc and underlying skin. I also allowed the verticals to "blow out" to emphasize their brilliance as opposed to the same steel in shadow. Sunlight and shadow also play a role in changing what is really a uniform glass facade. This view has become my favorite over the years.

I titled this version "The Gates of Mordor."

Here is an example of how raising the contrast to 11 can seem to convert an image to monochrome. Only upon closer inspection is the now navy blue of the windows revealed in the shadows. I admit that this is so abstract that the viewer only understands if they know the building. Which you do now, to some extent.