A WEEK AT THE COAST 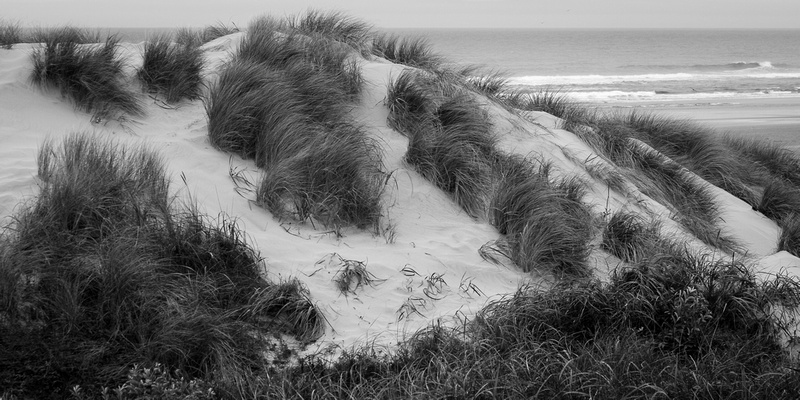 A WINDY DAY ON THE OREGON COAST B&W : FINAL VERSION

It was a real pleasure spending a week with Fran in Florence, on the Oregon Coast. She found a wonderful house to rent, a short drive to the beach, whose only problem was the 28 steps up  from the car to the living room; I found that counting them relieved some of the misery. We had mostly wonderful weather, which means it did not rain horizontally, and explored a lot of the nearby beaches on the Central Oregon Coast. A crowded beach meant we had to share it with ten other people - most of the time we were nearly alone. The image above was taken on a typical day at the beach closest to home, which was situated at the North end of the Oregon Dunes National Recreation Area,  a forty-mile long stretch of North America's largest sand dune formations. I learned on this trip that the dune grass was introduced in the early 1900's to try to control the dunes, and remains the only thing that really keeps them at bay. Our local Freddie's, a mile from our house, was backed by a four-story sand dune beyond the store. 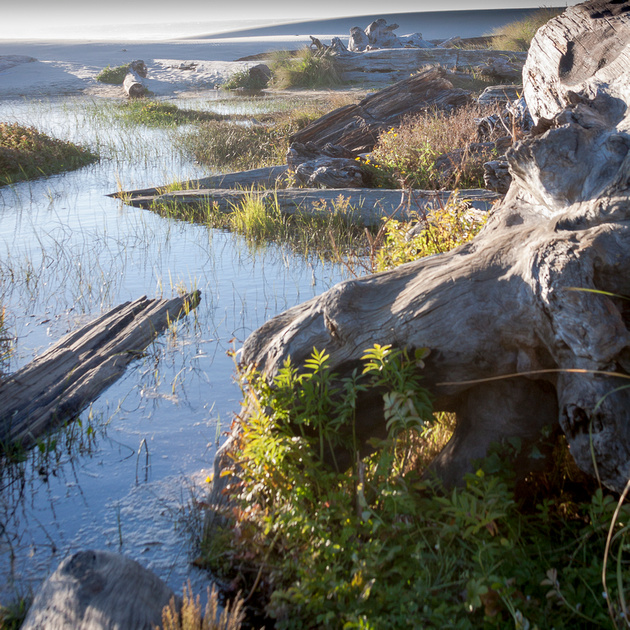 PATH TO THE BEACH : FINAL VERSION

This section of the Coast presents a different beach experience. Even in sections that are not totally dune-bound, the path to the beach is rarely straight forward. This was the first path we were supposed to take, nixed by Fran before I had the chance to sprain my ankle; we discovered an easier path at an adjacent resort we were "checking out" for the rest of the week. Small bodies of water, ranging up to real lakes, frequently are trapped inland of the dunes. 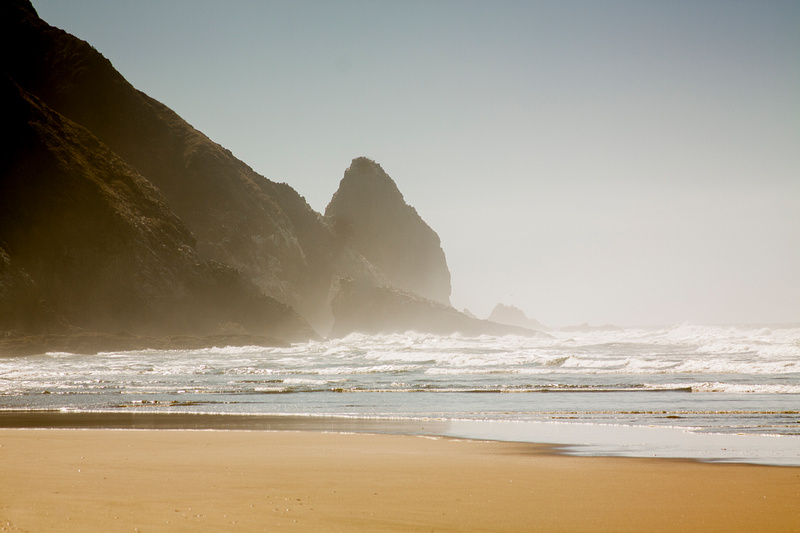 Heceta Head Beach, north of our house, was one of the few parts of the nearby coast that was easily accessible. It's a cove protected by two headlands, typical of the Coast, which are cliffs that project into the ocean and divide the miles of coastline into separate stretches of sand. The Northern headland sports Heceta Head Lighthouse, reputed to be the most photographed lighthouse on the Oregon Coast. 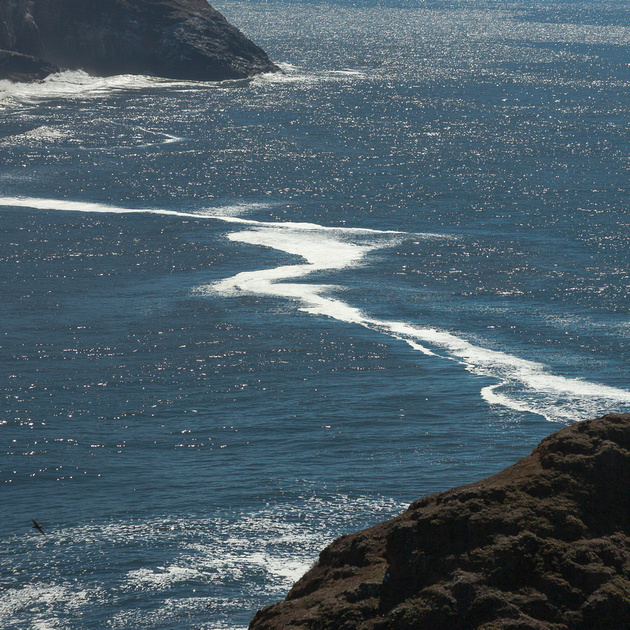 I noticed this s-curve in the surf while walking up to the lighthouse, and thought it was a nice minimalist view of the cove. You can decide which version works better. 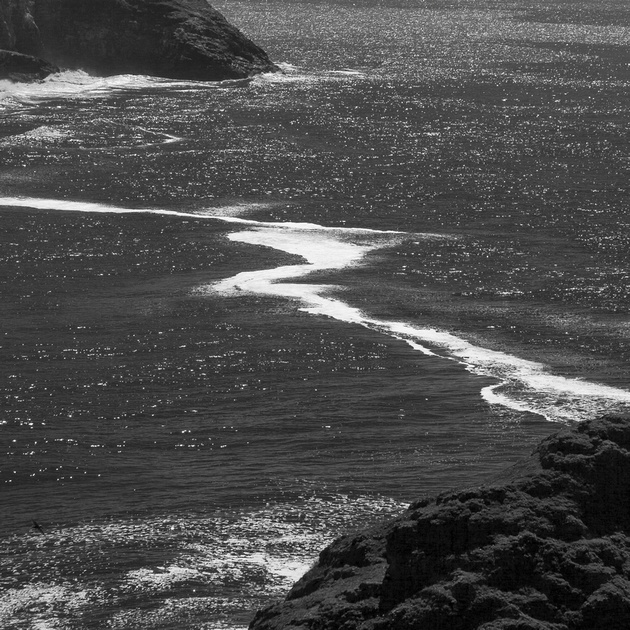 You could make a serious argument that both versions are monochromatic, since the color version contains only blue, white, and brown. The black and white version highlights the surf a little better, but the only "subject" that feels dissed in the seagull at the bottom left corner, who gets completely lost without his black silhouette against the blue water. He certainly would opt for the color version. 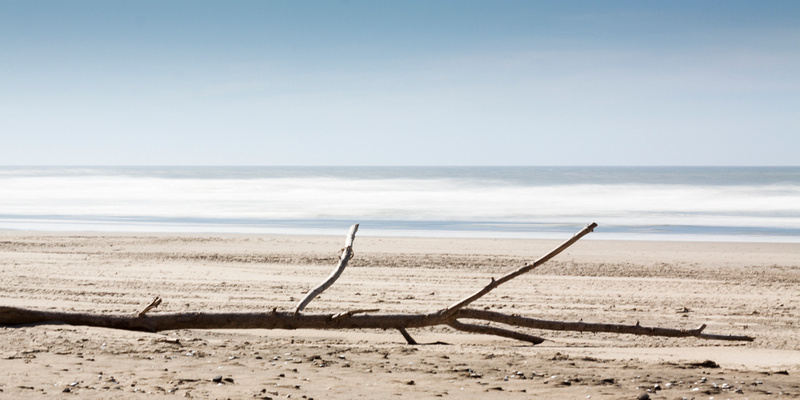 Although I was a total failure as a "proper landscape photographer" since I never was up for dawn, I did try some experiments on the coast, especially on the beaches that were uncharacteristically flat and endless. Here I focused on this log while with the aid of my tripod and a 10-stop neutral density filter I slowed the shutter speed to 8 seconds on a sunny day. The surf is now rendered as a milky substance instead of the separate waves of reality, while the lump of a log, which refused to move, is rendered as sharp as the original 1/30 of a second version. If I stuck around till twilight, the speed would turn into several minutes, and the sea would be one glassy surface. 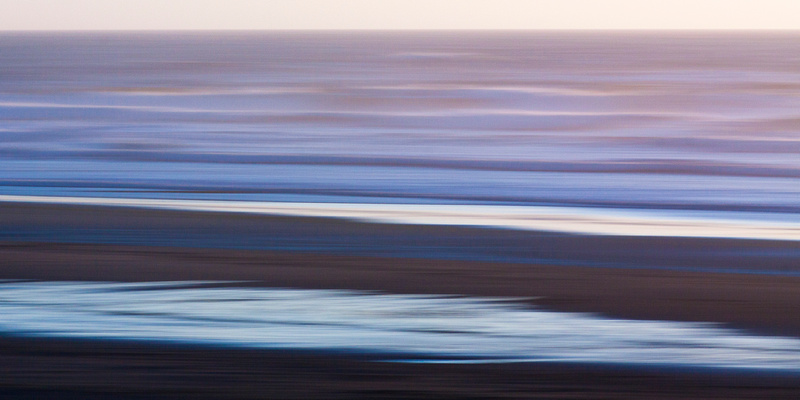 This abstract was achieved through experimentation without any technological hocus-pocus. Faced again with a pretty featureless beach, I simply moved the camera sideways while taking the ordinary correct exposure. As my first experiment in ICM (intentional camera movement) I consider it a success. The waves and beach puddle are rendered as out of focus brush lines, which highlights the color bands since there is nothing else left to focus on. Don't be afraid to experiment, since pixels are free, and you needn't show anyone anything anyway, unless you write a blog. By the way, this is the best exposure out of ten, for what it's worth. 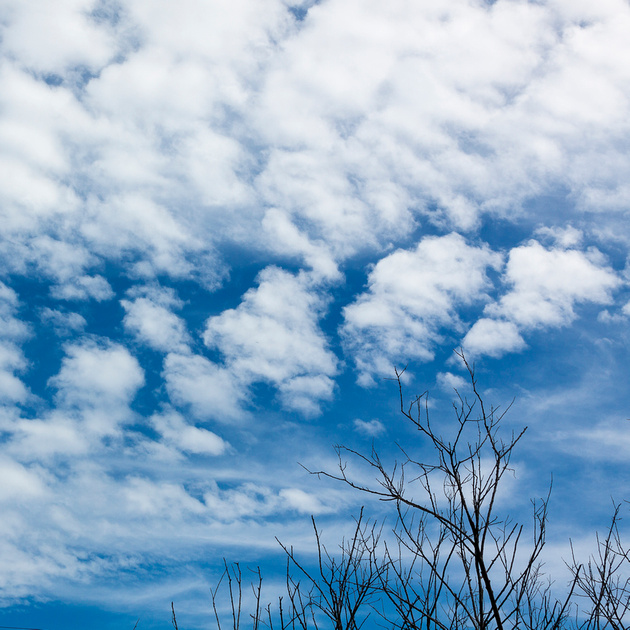 Sometimes the only thing to do is to photograph the sky, even if there is no suitable landscape around. On the Oregon Coast, you don't neglect interesting cloud formations, since a completely gray sky will probably return tomorrow. 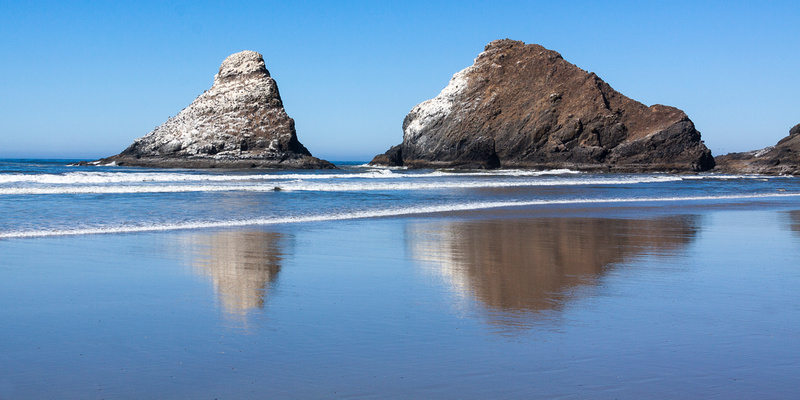 Never miss a chance at a reflection, so this pair of sea stacks back at Heceta Head Beach is now four sea stacks. I like the color version which shows off the sea bird preferences on the rocks, because of the white guano, which could be mistaken for highlights in a black and white rendering. 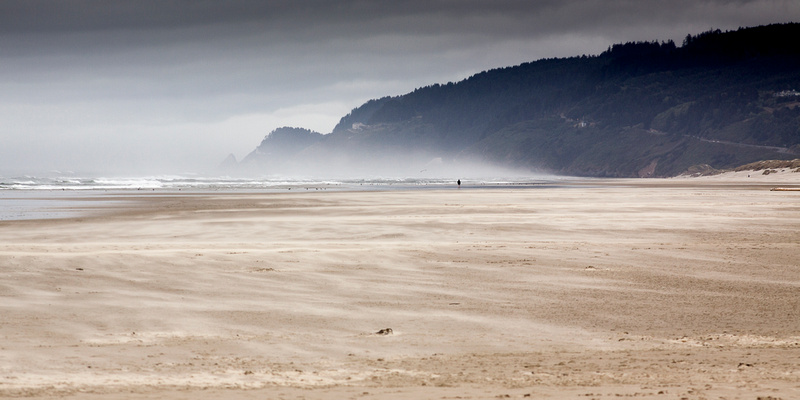 TIDE'S OUT, WINDS UP : FINAL VERSION

Here I used a slightly slower shutter speed, but still hand-held, to emphasize the pretty strong wind which was fortunately at our backs. Like that downhill hike, you will inevitably have to climb back up and face into the wind, but here I can try to show the shifting sand in a still photograph. the incoming fog bank adds some mystery, and our lone companion on the beach adds a sense of scale. You also might notice my frequent employment of the 1:2 horizontal crop to emphasize the panoramic view. For a guy who is strongly oriented towards the vertical or to the square crop, I'm finding that I enjoy going wider when I go horizontal. Coastal imagery encourages this horizontal crop, since you can frequently lop off large sections of blue sky or brown sand, or both, to focus on the real subject, the wide expanse of the shoreline. Now I find myself somewhat disappointed when I can't lop off sections of my carefully framed images because the sky and/or the foreground is too interesting, and I am left with the original horizontal 2:3 out of camera frame! 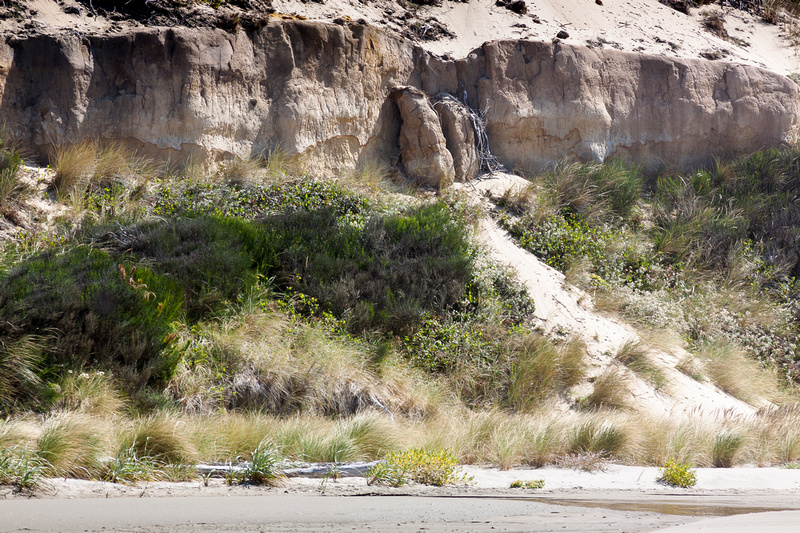 In this case the vertical extent of the cliffs would not allow a wider view without a wide angle lens which I don't like and don't have. Sometimes you can really see the limits of the beach and are just happy you aren't there when the waves are actually eroding the cliffs. This section of beach was at the bottom of a half-mile long "crowded" trail called the "Hobbit Trail", where we shared the beach with about a dozen other people. I know it's now fall, but I don' think this trail would really be crowded even if you had hundreds of people on this beach. 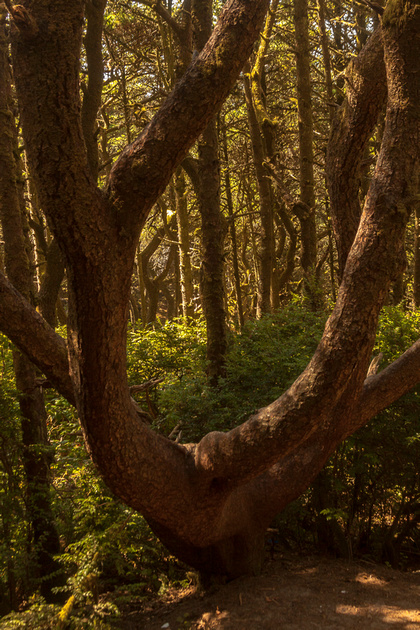 Now you can see why some wag named this trail down to the beach the "Hobbit Trail." Another illustration of why the Oregon Coast is not really a boardwalk lover's dream; we require a little work before you get to the beach. 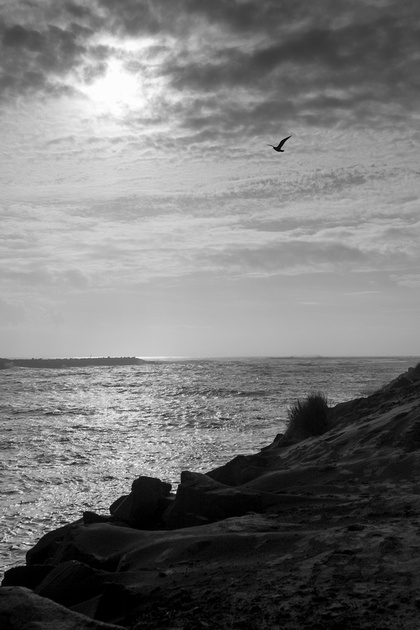 I will take my verticals where I can find them on the Coast, and when the sun and a passing seagull cooperate, I'll be there. This is the North jetty at the entrance to Florence harbor, which shows that even a half-mile long pair of man-made spits can be pretty wild place when they are on the Oregon Coast. Black and white allows me to tame the sun and more realistically render the foreground as a near silhouette without the viewer wondering why I've underexposed the shot. And the seagull gets to show off without the distracting blue sky. 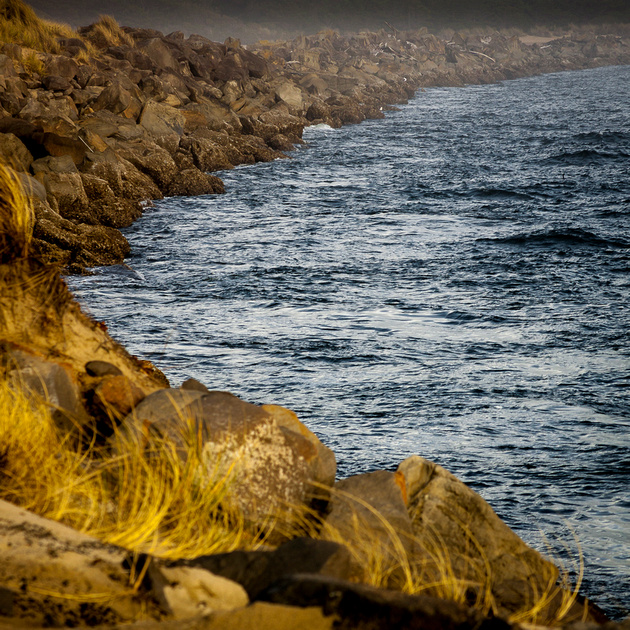 Looking the other way on the same jetty reveals its winding shape, emphasized by this square crop. You can appreciate the hundreds of tons of rock  brought here by the Army Corps of Engineers, all a year ahead of schedule and under budget, according to the historical plaque! 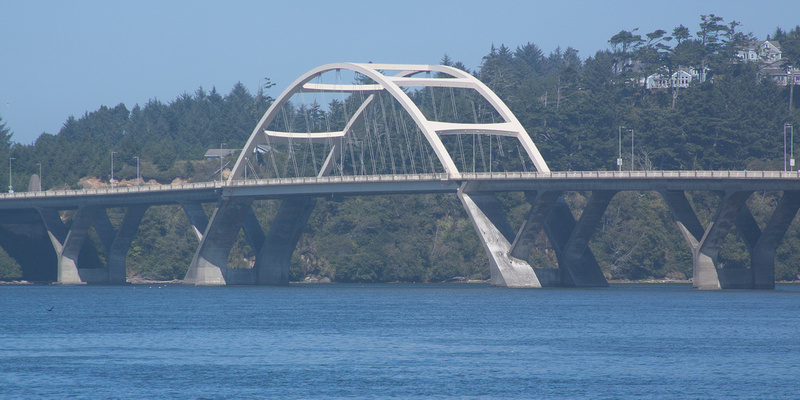 Some of the best man-made highlights of the Oregon Coast are the bridges that allow Route 101 to span the few rivers that cut through to the Pacific. C.B. McCullough designed most of these spans, and most are still there, but his bridge at Alsea Bay was replaced by this modern design reminiscent of Portland's Fremont bridge in 1992 by Walter Hart. The Siuslaw Bridge from 1936 is said to be Art Deco, but I find it to be romantically vaguely Egyptian in character. It is also a rare drawbridge on the Oregon Coast. The modern bridge at Alsea also kept some of McCullough's fanciful towers at the bridge's two approach segments as an homage to McCullough. 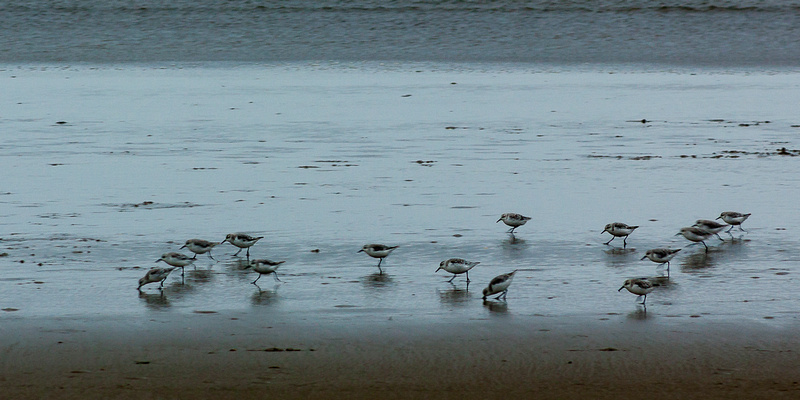 These Plovers are quite cute, and can run fast, but do not seem to like to fly, which restricts your god-given right to watch Rover play in the surf at some times during the year on this section of the Coast. We couldn't have dogs think that they could actually catch a bird, and subsequently ruin their self-esteem, would we? 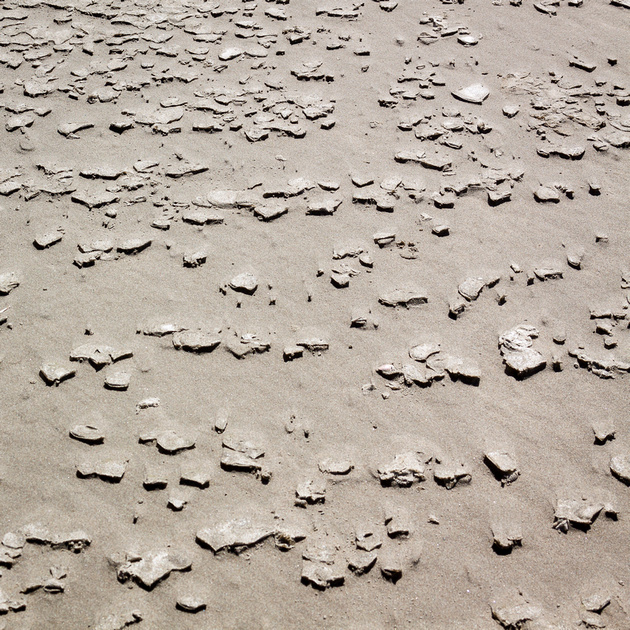 Sometimes you look down and find a natural feature that defies at least my uniformed explanation. What would cause this formation of God's potato chips to form in the sand. I used my characteristic square crop, but believe me, these stretched on for dozens of feet, and then just stopped. 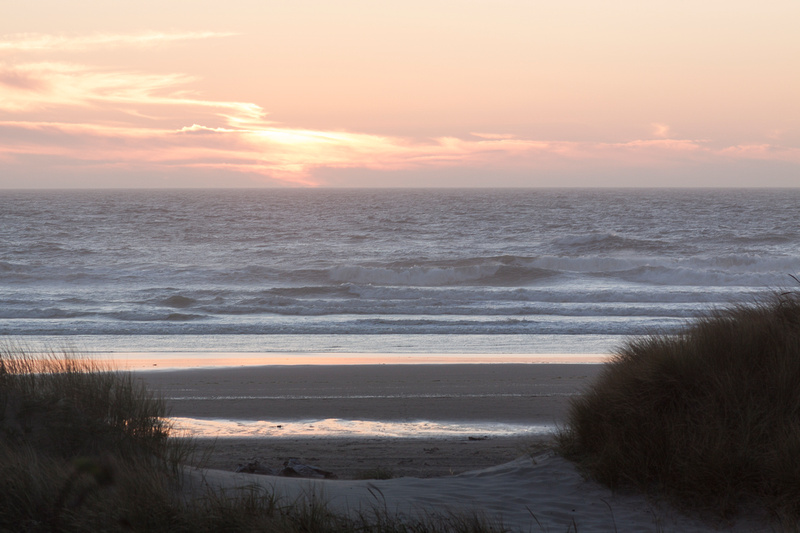 We did get to see one sunset, but it was characteristically through some interesting cloud formations, which leads to some interesting sunlight reflections in the surf and on the beach. No standard red ball diving into the ocean for us. 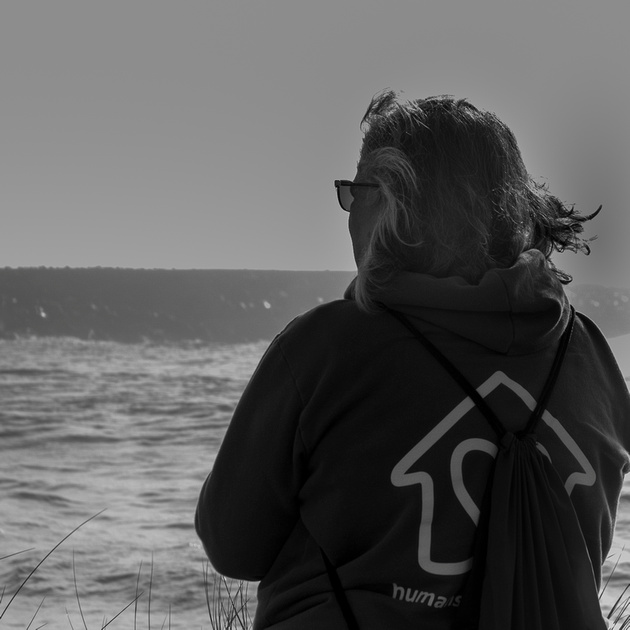 Finally, a view of the most important subject on the Coast. Black and white shows off the Reba McEntire stripe in Fran's hair.