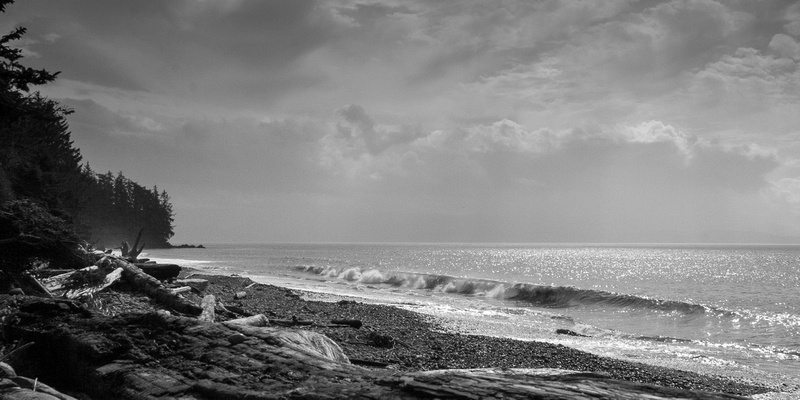 Fran and I spent a delightful ten days across the border in Canada, visiting Vancouver and then taking the ferry to Vancouver Island to stay a week at the town of Sooke, about 35 miles West of Victoria. Just like on the Oregon Coast the week before, it was absolutely fantastic to take out the camera again and have some new landscapes to explore. I always say that a photographer does his best work in his home region, but there's no doubt that a new place can get your juices flowing. While the coast of British Columbia is really just another string of beautiful Pacific beaches, as we started to explore different areas there were some locations that spoke to me. 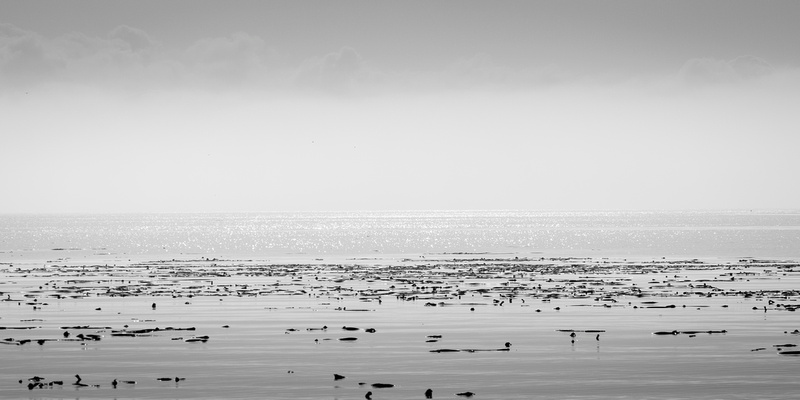 The real difference on this coast was the absence of people and most of the typical tourist trappings found along 101 in Oregon. While Sooke is 5 times as big as Cannon Beach, most people live in neighborhoods inland that most tourists will never see. Most tourists seem to go to resort areas isolated to certain parts of the beach, and while I admit it is October, I couldn't find one Sooke t-shirt anywhere in town. We had most places to ourselves. Since Sooke is only 35 minutes from Victoria, it is slowly becoming an exurb instead of a beach town; yet with only one road along this coast, traffic jams resemble those on Hawaii. Then you get to your destination, and no one is there. The two images above show how different the ocean can behave, depending on the exposure of the beach. French Beach faces Southwest on Strait of Juan de Fuca, while Gordon Beach faces South. In general, both face the Olympic Peninsula, but Gordon Beach is so calm that it hosts a thriving kelp forest offshore, While French Beach's rocky shore generates a rare clacking sound (at least to us) as the waves retreat from the shore. 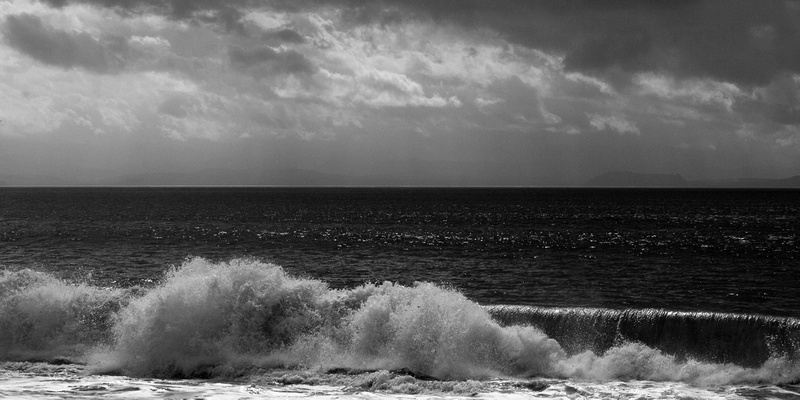 The land in the distance is Washington State, but this is clearly the ocean. Every beach is covered with enough rocks and driftwood to remind you that these locations are no place to storm watch - there is just not enough room. You probably have noticed my wide angle crops and monochrome pallet, which suit the locations and the light, which was not that dramatic. The scenes are mostly monochromatic anyway - substitute shades of blue and grey for black and white. Unless the foreground is really picturesque or the sky is so overwhelming that it would be a crime to crop any of it, a 1:2 horizontal crop expresses the coast very well. 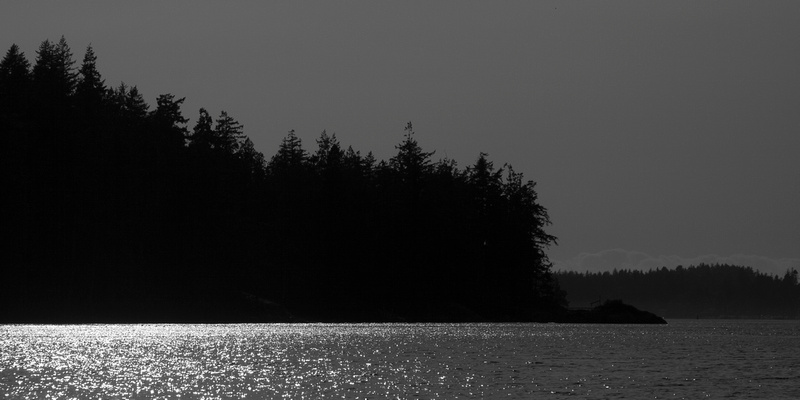 Black and white allows me to to concentrate on light and shadow. We are now on a spit Fran found in a residential area seemingly known only to local fishermen. Sooke Bay is protected from the ocean and will eventually lead inland to the Sooke River. This sky is very dull, but I can focus on the sunlight on the water without showing its source, and can render the dark green forest as a black silhouette. 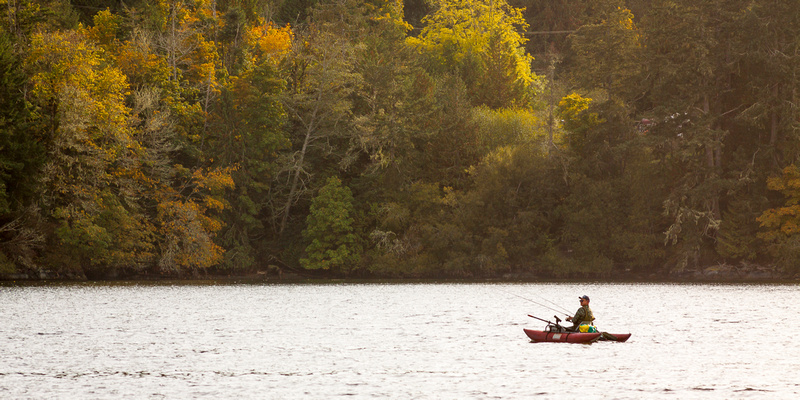 A few minutes later the sky opened up to reveal a preview of fall cover, which will probably peak in another few weeks. This fisherman was the only one without waders, since he can probably stand in the water. I took a few shots of these guys, standing stomach deep in the water, but they were too far away for it to make any sense or get any detail. 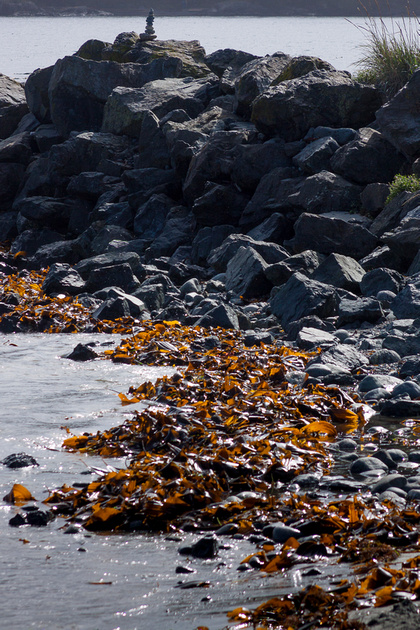 I had a wonderful time taking sea/horizon/cloud shots, but part of the trick of getting something new from these shoreline environments is to constantly search for something different. This could be orientation, like this vertical that concentrates on a bit of the spit even fishermen won't walk on, and tries to make something out of a rare spray of color in the blue/green environment. 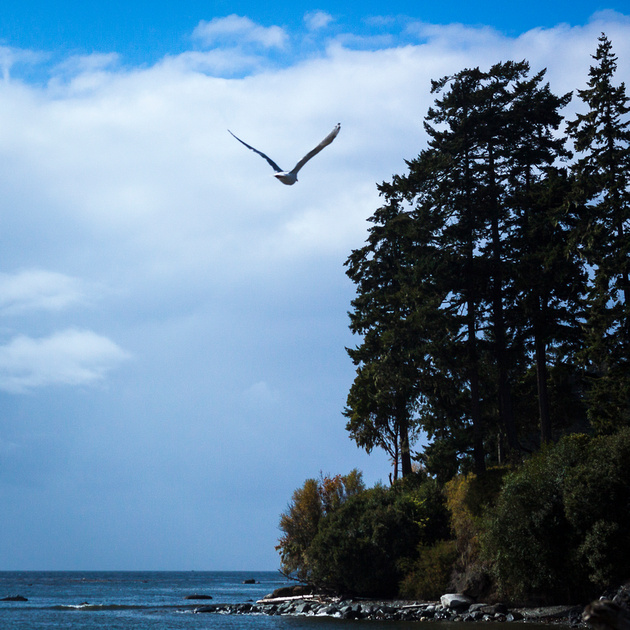 Here the seagull came to lend a hand to my composition, and while by no means a "nature" shot, you can see how even a seagull's behind can add some atmosphere, and a vertical orientation, to this headland image. The sun had come out, so I left the water and sky blue and the trees green. 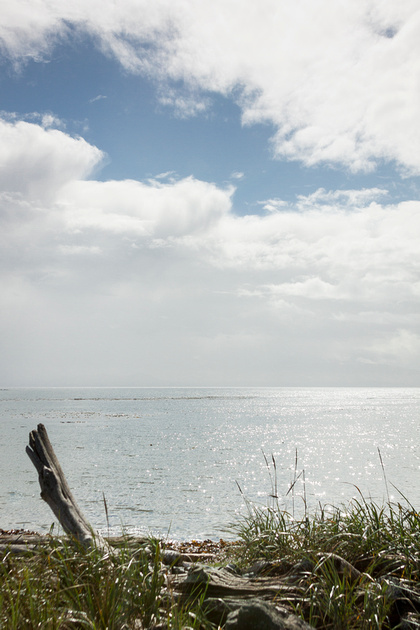 Now we will adjourn to Whiffen Spit, another long arm of land that divided Sooke Bay into an even more calm area. We found it by accident looking for a restaurant that no longer existed, but found a mile-long spit that we shared with most of the town's dog walkers. The spit was just wide enough to accommodate a wide path and two shore fronts. There was plenty of vegetation, but enough driftwood to assure that this spit was definitely underwater during a storm. This image looked out to sea. 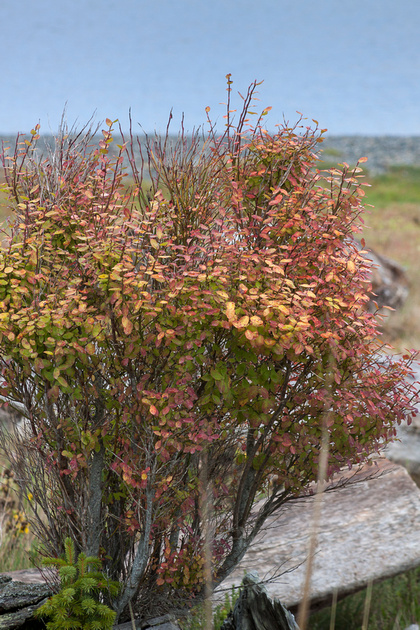 Looking towards the inner bay, I found this burning bush and driftwood to highlight. Just because you are on the beach it does not stop you from looking at other things. 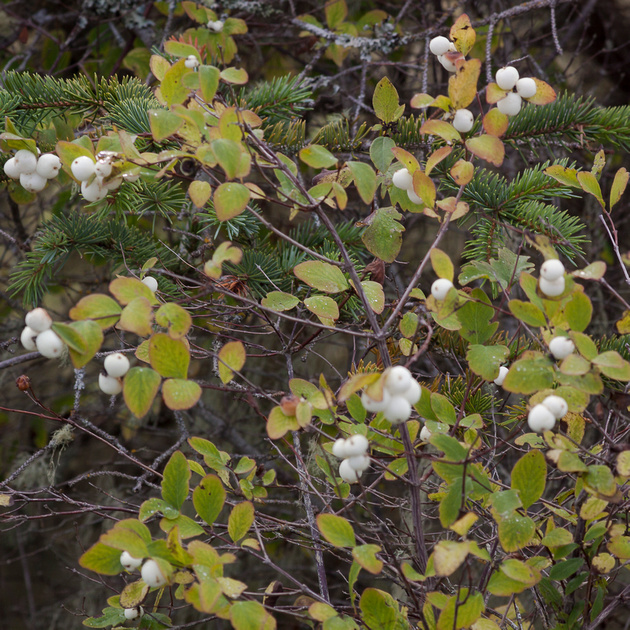 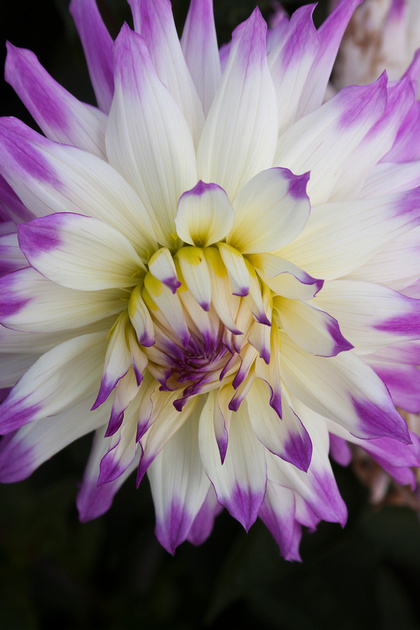 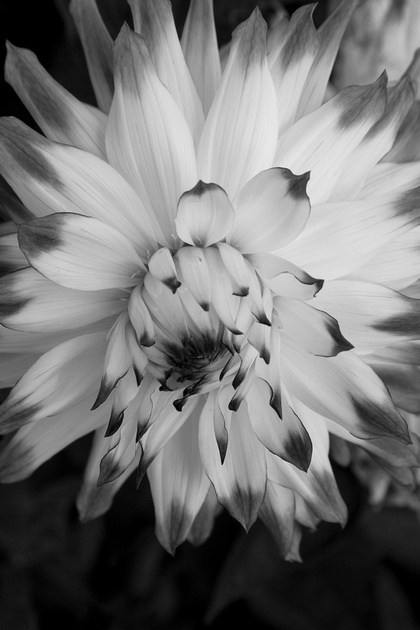 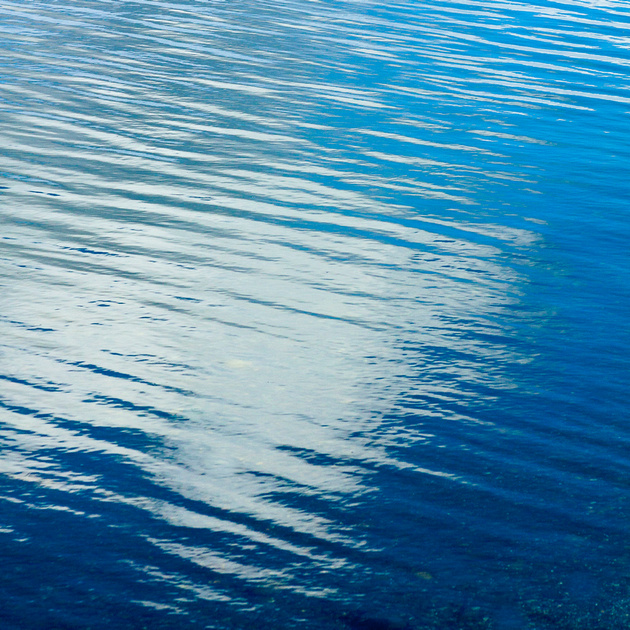 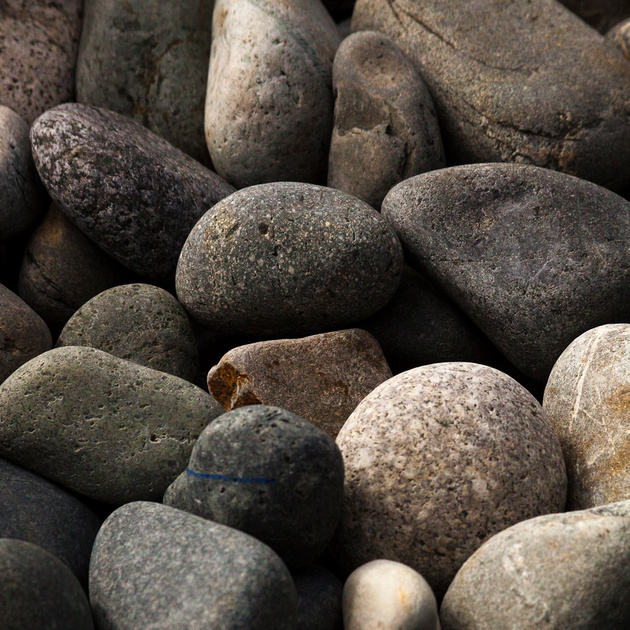 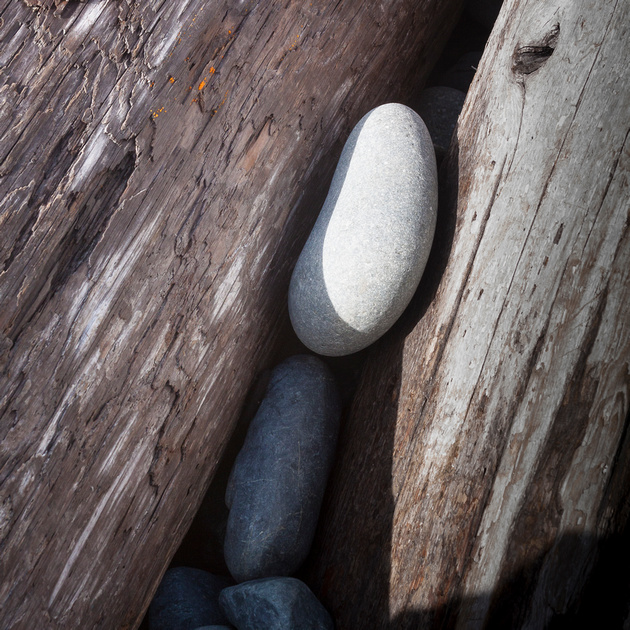 When all else fails when you are looking for an image, don't neglect just looking at your feet - you will be delighted with what you might find. One cloud reflected in the bay, the incredibly varied shapes and colors of beach rocks, and a composition literally found while I was sitting on a log proves my point. The fact that they do not shout "Sooke" in particular is not the point. 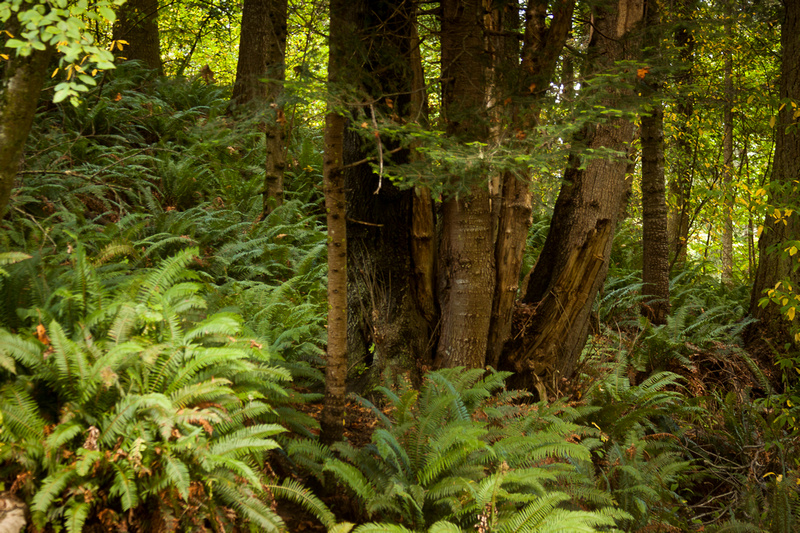 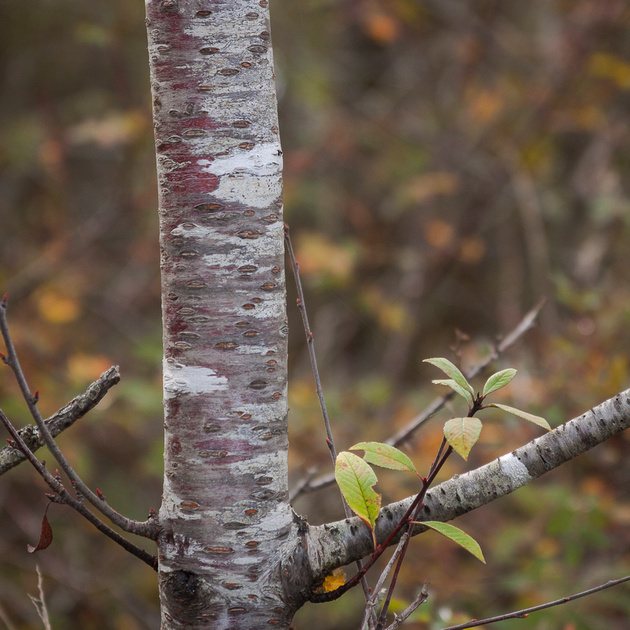 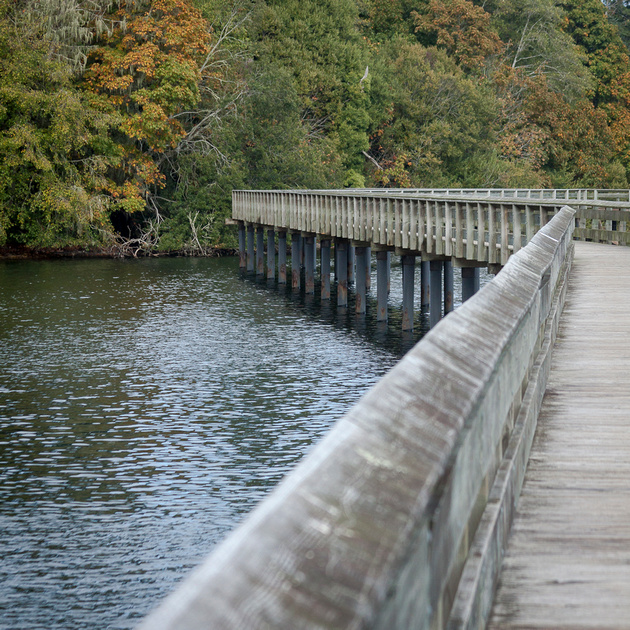 These three images come from a park almost in the center of Sooke, which somehow the city does not trumpet but even ignores. Maybe it's another example of how un-touristy Sooke is. We were standing in a small park with a bandstand, which looked like it maybe hosted a farmer's market at best, when we noticed an unmarked trail off to the left. Suddenly we we on a wooden switch-back boardwalk which plummeted at least 100 feet down to the water and then continued as a boardwalk/dock out into the bay. It was as if Portland kept Laurelhurst Park or Mt. Tabor Park off the tourist map. Macgregor was Sooke's first mayor; Sooke was only incorporated in 2000. 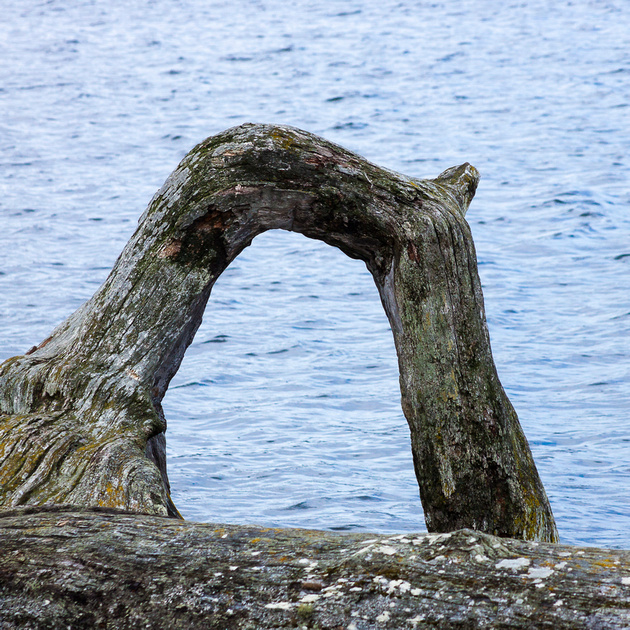 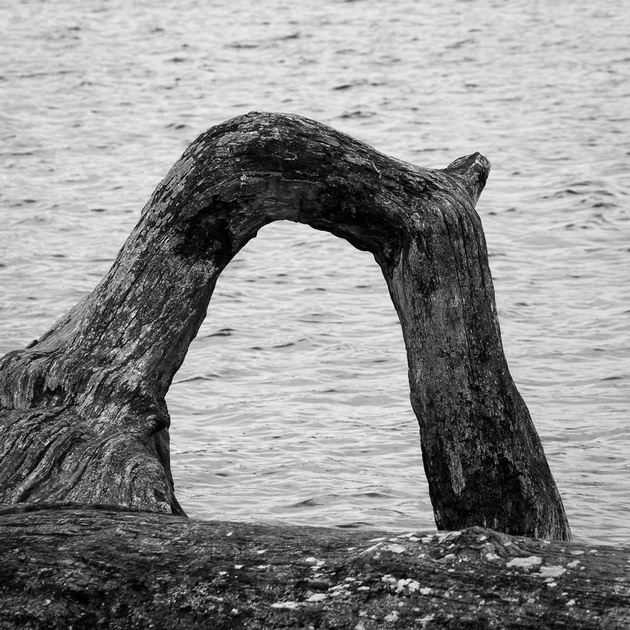 Finally, in the spirit that we each see what we see, and shouldn't hide it under a bush, I offer two versions of a curious piece of driftwood that I came across on Whiffen Spit. Since the black and white is more abstract I think I like it better, but to each his own. Enough people on both Instagram and 500 Pixels are Trekkies, so they presumably recognized the resemblance to the time-travel portal on the "The City on the Edge of Forever", and these images received far more "likes" than I anticipated. You never know where you will find your inspiration, or your audience, so you might as well just go for it.