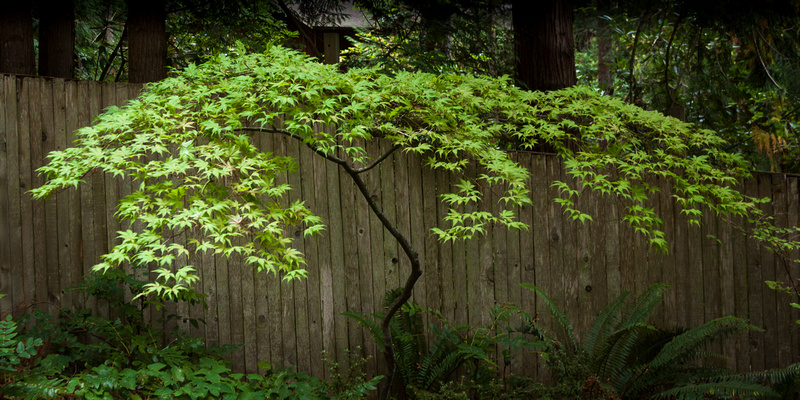 This week I'd like to highlight some of the delights Fran and I recently discovered on a stop in Bellingham,Washington on the way back from Canada. It's no secret that I like both art and gardens as photographic subjects, and I hit the mother load when we noticed a garden on the web as we looked for something to do in Bellingham before we hit the hotel. The Big Rock Sculpture Garden more than lived up to its name.

This 2.5 acre garden sits in a quiet suburb of Bellingham, seemingly unknown amidst a typical community. It was founded by three members of the Drake Family in 1981, and subsequently bought and preserved by the city in 1993. After our visit, I believe it can serve as a model for cities throughout the nation. The garden is subtly Japanese, but not overly so; it really highlights vegetation over flowers, with more than 100 varieties of Maples. While there is the attention to detail that is found in most Japanese gardens, the real focus is on the 37 sculptures of varied artistic intent spread around the site.

These sculptures are so enhanced by their settings in the garden that I can't imagine any sculptor in the world who wound not be delighted to be included in the collection. This in what is a city park, with just an open gate, run by volunteers, with no admission fee, open year round. To say that I was flabbergasted is an understatement. The garden is beautiful as just a garden, and then you throw in the sculptures and it is elevated to a higher level. I can only hope that these few images do it some justice. These are just 6 of the 37 sculptures on permanent display. The conjunction of art and garden can sometimes be confusing, since "big rocks" are a standard feature of the Japanese esthetic. Two images of the sculpture "Unity" by Russ Beardsley and Cameron Scott are a case in point. Like a miniature Stonehenge, some granite and marble stones are balanced along a path in the garden. Yet there is another big rock very near the foot of the sculpture, and for the life of me I couldn't decide whether it was part of the sculpture or not. Most of the other sculptures are not as ambiguous, although some of them that are very subtle "land art" types start to fade into garden art rather than art in the garden. But most are enhanced by their garden settings. This blue totem, "Lipchitziana", by Sebastian (one name) stands in contrast with the surrounding greenery. 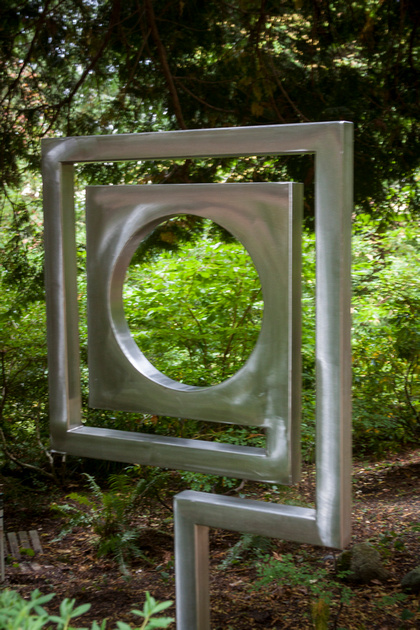 "Untitled" by Pat Kuchner, in stainless steel, stands apart and focuses your attention on the garden through its hole. Located at the beginning of the garden route, it thoroughly confused me since its nameplate was located across the garden path near a nice big rock. Was this Big Rock Garden  going to be devoted to naming Big Rocks? 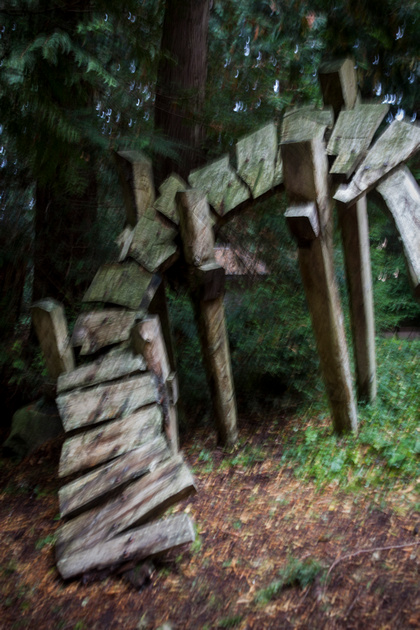 This large wooden sculpture resembled something you might find in a playground, and it is a tribute to Bellingham parenting that it is not abused by children who want to play on the construction. It is entitled "Turn" by Lee Imonen, and these two views show how it is transformed from a drunken staircase to a drunken dinosaur by the simple act of walking a few steps. "Stabile", a metal construction by Jan Zach, asserts its place in the forest in a much more direct manner. It seems to move even while it is standing still. 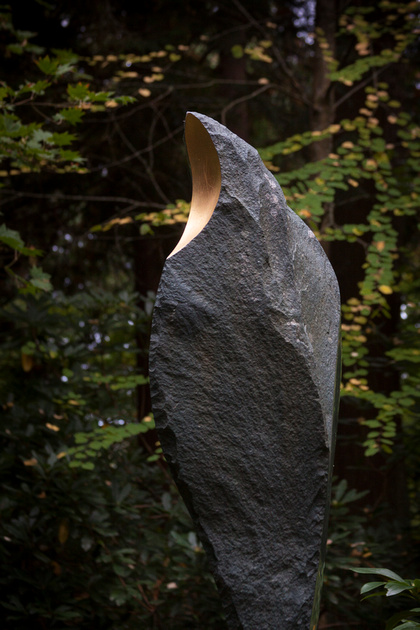 Muter still is "Tree of Life" by Michael Jacobsen, which really is another "big rock" which proudly stands on its pedestal, only showing its sculptural  origins in the bronze bite taken out of its top. 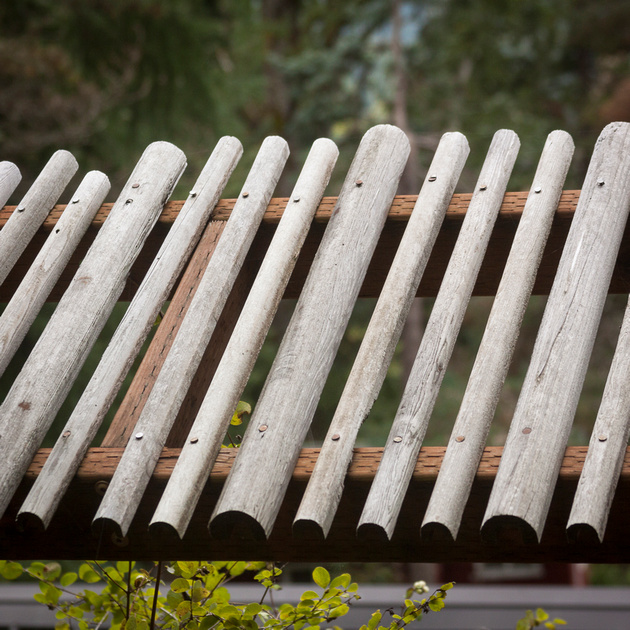 Some of the garden's details approach sculpture as well. This is the top of a fence which borders the garden and tries to nicely delineate its boundary from the suburban surroundings.

These final sets of images are my effort to express some of the beauty of the gardens as gardens alone. This is mostly done with specimen Maple trees and with engaging varieties of vegetation. These contrasts express themselves beautifully in both color and black and white, depending on your taste. I would point out that as usual the contrasts in the black and white versions can be played up far beyond what would be seen as realistic in a color image. There are few constraints once you accept the abstraction of black and white. You could even reverse the luminosity of different colors with no one being "the wiser." 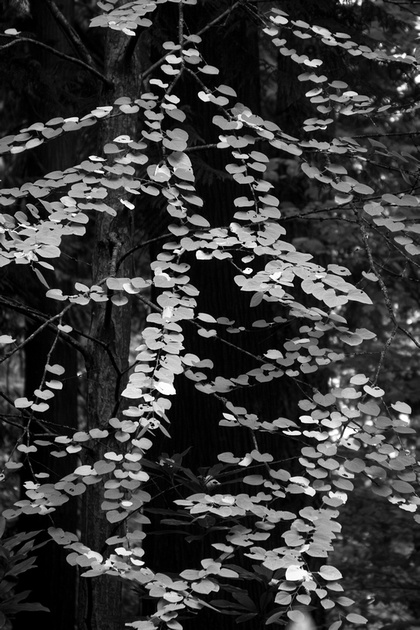 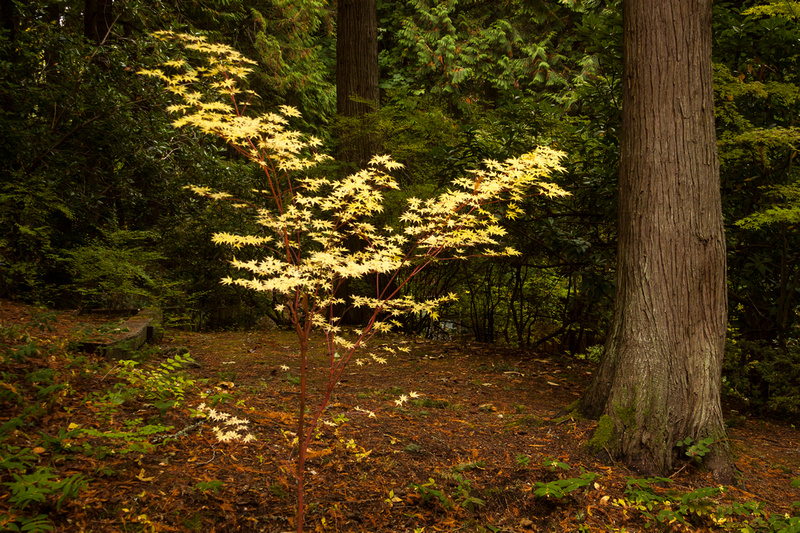 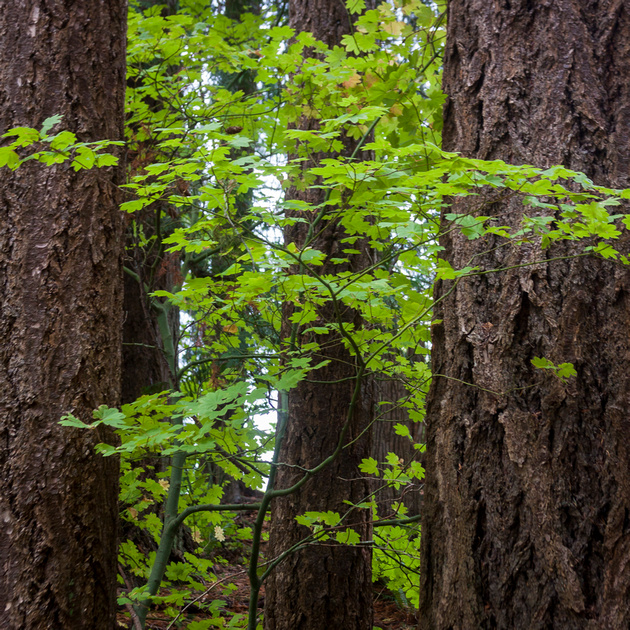 AMONG THE GIANTS : FINAL VERSION 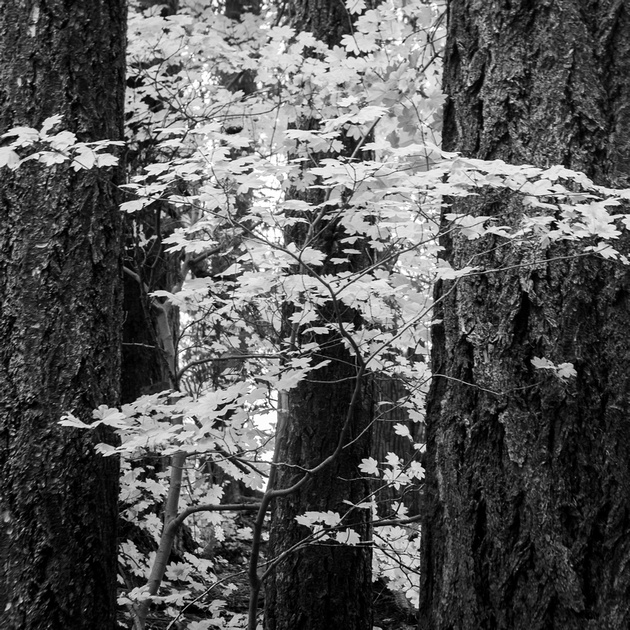 AMONG THE GIANTS B&W : FINAL VERSION

In this final image, I used the panorama format to highlight the beautiful shape of the maple. The black and white version allows for subtly more contrast between the leaves and the surroundings. 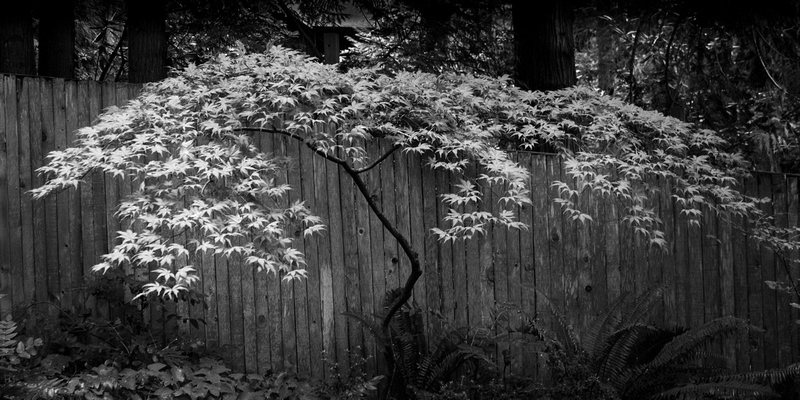 I hope you have enjoyed this brief tour of the Big Rock Sculpture Garden. I would encourage you to use the web to head off the beaten track in your travels. You could be pleasantly surprised.