ANOTHER CACHE FROM THE ARCHIVES 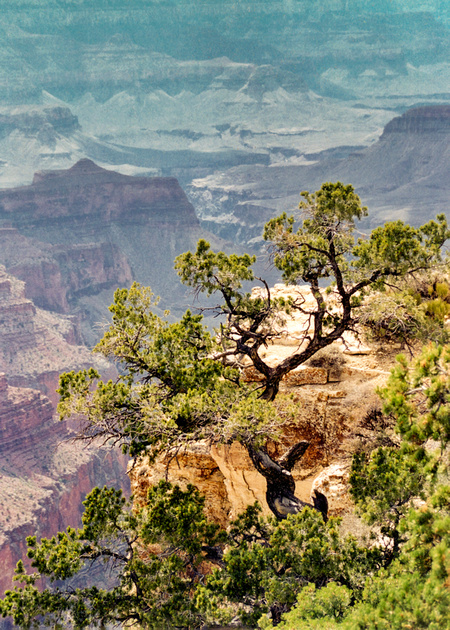 This week I would like to take you on another excursion through a tiny portion of my archives, courtesy of my scanner. I took a few minutes last night to resurrect a dozen images from obscurity, some more than thirty years old. I recommend you try this every once in a while, because you might be surprised what you might find. Often you find "rejects" that deserve a second look, either because they were overlooked because another image was deemed more worthy, or because the one-hour photo technician so mangled the file that you never even considered the image. These happen to be film photos that have been converted to digital with the scanner, but you could also find gems in your digital files. Either way a short post-processing session could bring back some pleasant memories along with a renewed respect for your formerly forgotten photographic endeavors. 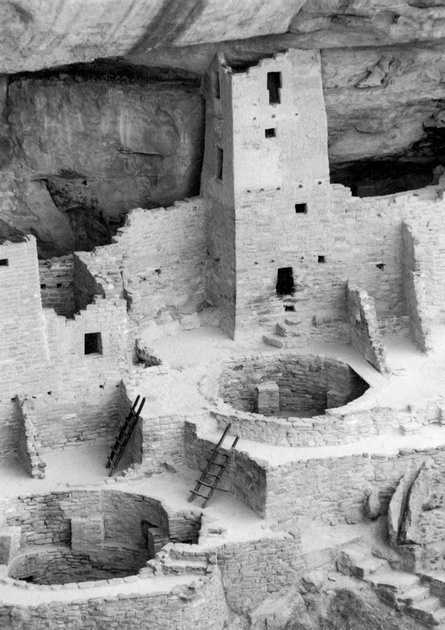 These first four images come from a trip to the Four Corners area about twenty years ago. This part of the country is so varied and beautiful that two weeks barely scratched the surface. In fact, I could easily fashion another month of travel by visiting the areas we skipped on this trip. These images were placed in albums and rarely viewed, but upon inspection deserved another look, especially since I didn't have the ability to process the images myself at the time. The Grand Canyon image, like most, has no chance of delivering the magnitude of the canyon, but it's attention to one wonderful tree on the edge shows what you can do by avoiding the wide view, which seldom works anyway. I have found that Grand Canyon images either depend on a magnificent sky, or an intense view into the canyon that avoids the horizon altogether. My effort follows that pattern, which depends on coaxing detail out of the background which is completely lost in most snapshots. I've been to the Canyon only this once, to the North Rim, which I recommend only because other people sometimes diss the South Rim, which I'm sure is also fantastic. By the way, the best photographer of the Canyon is Alan Briot, who proves that you shoot what you know best, since his "booth" is on the porch of the El Tovar Hotel on the South Rim, where he sells prints to tourists that know they cannot approach his artistry. Google him to see that images can begin to convey what you remember about the Grand Canyon.

The next image is from Mesa Verde National Park in Colorado, home to one of the largest cliff dwellings in the area. This detail focuses on several kivas, sunken ceremonial portions of the ancient apartment house. The conversion to black and white really brings out the details and textures that were not apparent in the original print. 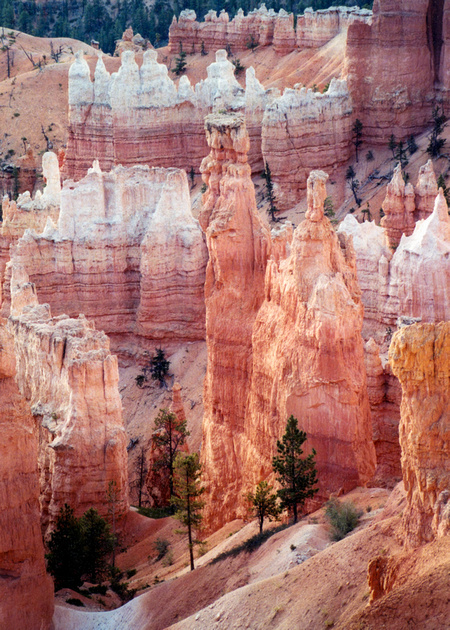 You have got to get to Bryce National Park in Utah if you haven't gotten the chance to visit this magnificent landscape. The sculpted hoodoos that fill up an entire valley will blow you away, especially if you are an orange fan like myself. The park allows for hikes into the canyon so you can get detail shots like this one instead of just the ordinary spectacular overall view. Try to get some of the pine trees into your image, as the contrast of green and orange really brings out the colors more than just a sea of orange. This image in no way resembles it's one-hour forbear, which was completely overexposed and washed out. You would think that I didn't know what the heck I was doing. 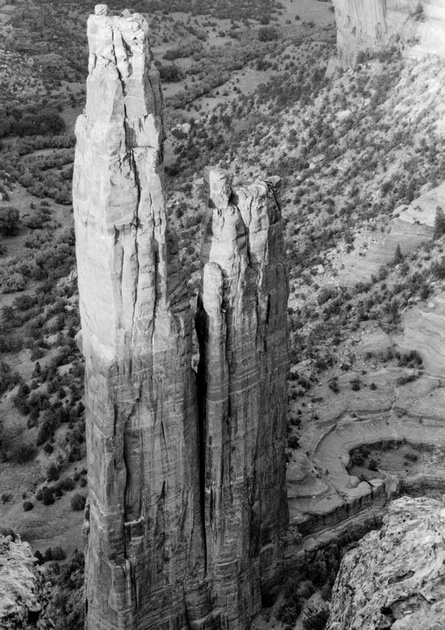 The big surprise on this trip for me was the Canyon de Chelly on the Navajo Reservation in Arizona. I was unaware of this remarkable area, a place of refuge for the Navajo in their long march pursued by the American army, and since then an oasis in the High Dessert of the Colorado Plateau. The canyon is a multi-pronged depression that is lost in the vastness of the reservation but contains the best farmland in the entire area, with a micro-climate unlike the surrounding desert. We had the wonderful opportunity to take a guided jeep trip into the canyon, led by a Navajo man who was only allowed to lead trips because he had married into a family that lived in the canyon. I will never forget when this gentleman showed this New Yorker his hogan, a traditional Navajo dwelling lost somewhere in the distance, and declared that he was moving because the immediate area was getting too crowded for his taste. If you want to learn more about Navajo history and culture, you should pick up a mystery by Tony Hillerman or his daughter, Anne Hillerman, who explore crime and punishment on the vast reservation. 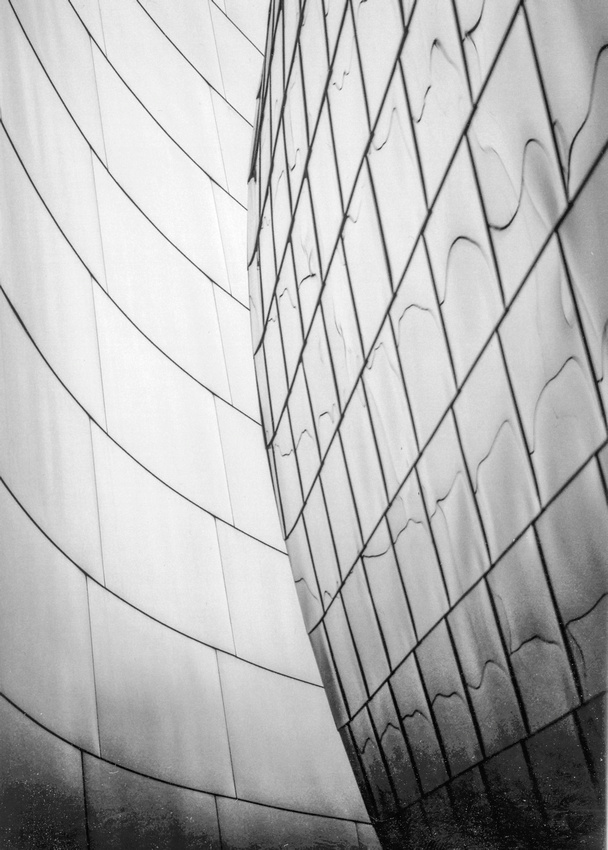 We will now take a whirlwind tour of Urban America, in a series of images taken across the country. These are not my best images from these places, which is one of the reasons why they were forgotten. But every image can't be your personal best, and other images can expand the story or bring out different aspects of the site. And just because an image is not "your best" doesn't mean it can't be explored now that you have more control over an image's interpretation. The Walt Disney Concert Hall in Los Angeles is like a gold mine for photographers; in fact, if it wasn't actually such a great piece of architecture, it would almost be a crime that it is so photogenic. It is pretty hard to come up with a bad composition, especially if you are content to focus on individual moments of its swirling form. I've left out the ground plane and the sky (and the almost inevitable fashion model walking through) to concentrate on the curve and its reflection. I especially enjoy the "fish scales" beloved by Gehry which are just reflections of straight lines and exist in my photograph despite their absence in the real world. 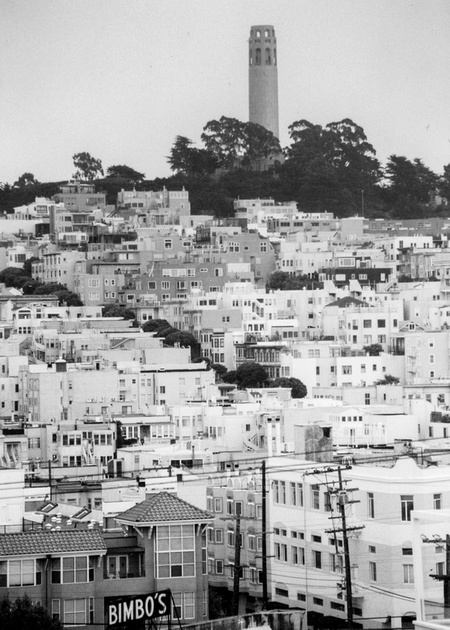 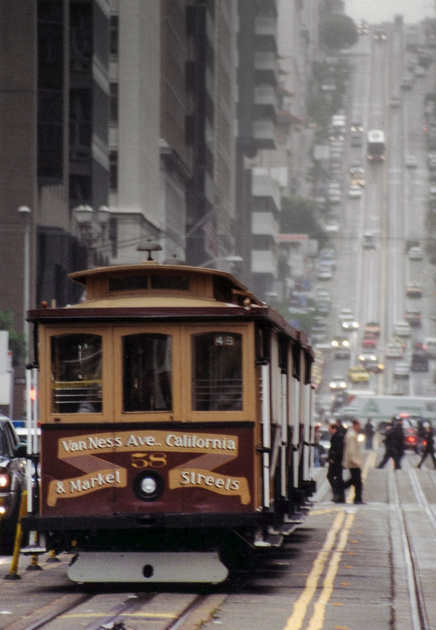 Here are two images from San Francisco which in some way sum up the city's appeal for this observer. The first shows how the city subverts its own classical Mediterranean style by its casual embrace of hedonism. The Coit Tower on top of one of the hills co-exists somehow with Bimbo's on the bottom. A New Yorker can only gasp when he realizes that these people were crazy enough to put a grid on a mountain and then invent a mass transit system to overcome it. 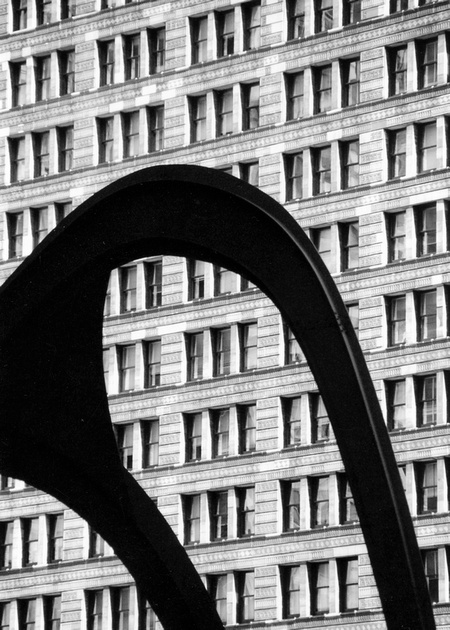 This snippet of Chicago plays with a monumental sculpture in front of a prototypical early Twentieth Century Chicago skyscraper. If I focused the other way through the sculpture I would no doubt have a mid-century Mies skyscraper as another backdrop. When you also throw in dozens of Frank Lloyd Wright houses, you can see why Chicago is an architectural mecca. 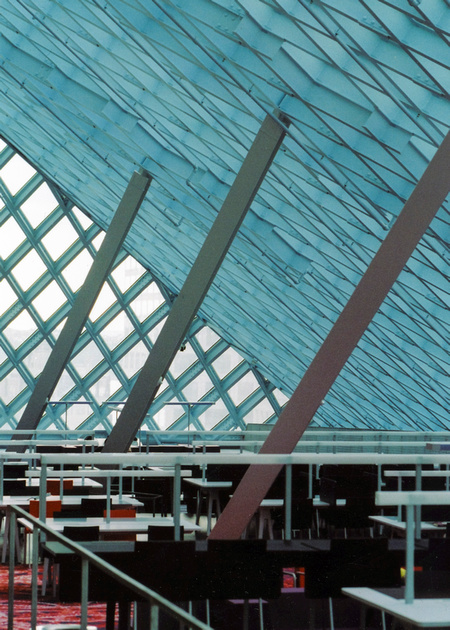 This is just one image from an entire afternoon spent in Seattle's new downtown library. It remained in the archives because I made so many images of this incredible building that some had to be left on the cutting room floor. This is a view of the largest reading room at the top of the space-frame structure,  complete with sloping columns (why not?) that didn't seem to have much to do with the actual structure. I enjoyed how the varied angles of the ceiling seemed to change the color and structure of the grid, which is actually uniform. All in all, this is one building where the architects seemed to have an illegal amount of fun. 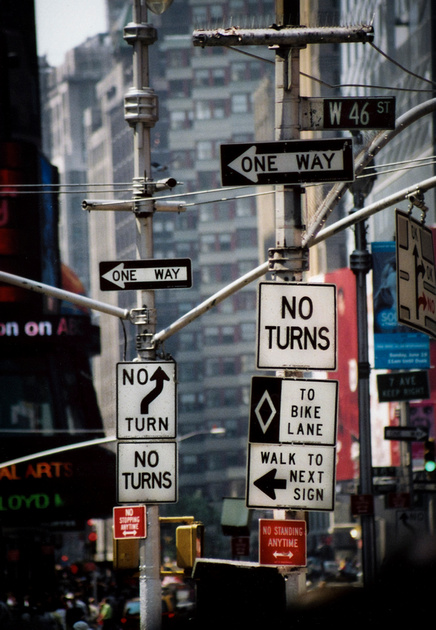 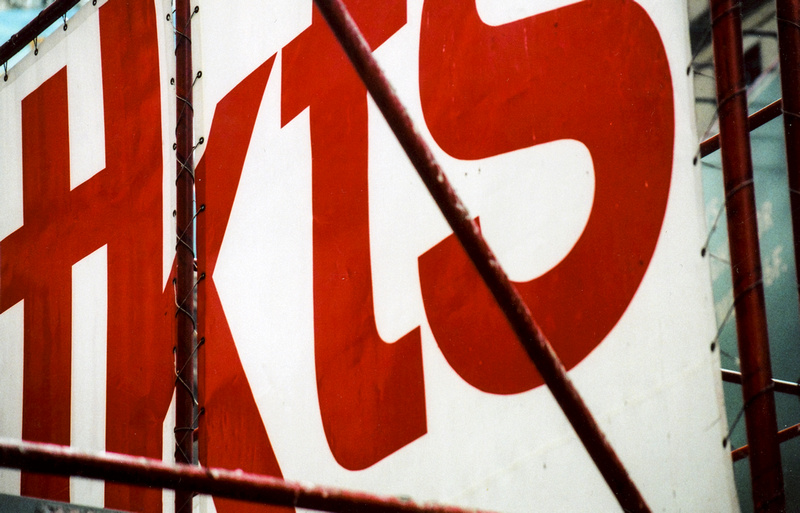 And onto my hometown, whose attitude knows no bounds. It is a miracle that anyone gets through Manhattan unscathed, especially when such clear instructions are provided at important intersections. Upon further inspection in slow motion, I wonder why "no turns" doesn't cover angled turns, or why one should walk to the next sign, which is only two feet away? Add in the fact that most pedestrians will certainly not follow any rules that are not convenient at the moment, and you get NY chaos. The other image shows the power of graphics in a photograph, especially super graphics; the tkts booth is a rite of passage for any experienced New York theater patron. Every monument is not monumental, and this version of the booth is now historical as well. 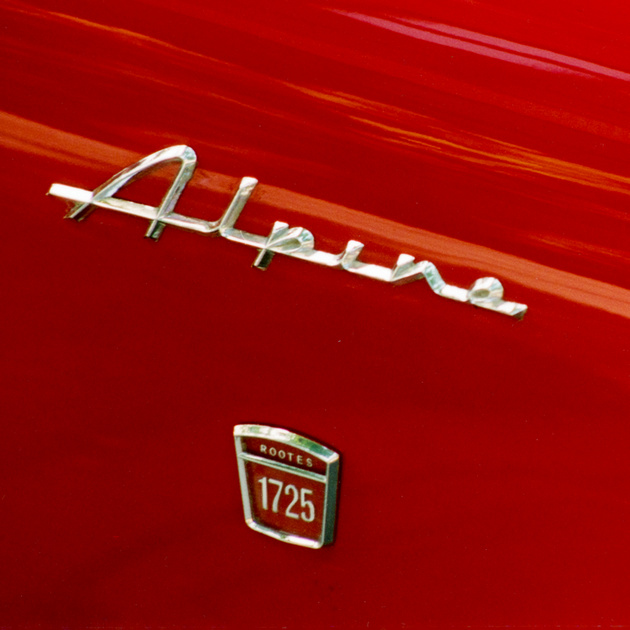 You didn't think I could get through this essay without an ad-hoc detail of my own? This colorful automotive graphic hides the sad fact that the Sunbeam Alpine was one of the worst cars ever made, despite the joyous color and graphics. Research has revealed that Rootes was the overall corporate parent of Sunbeam; 1725 probably refers to the awesome displacement of the engine, which usually lasted longer than the body panels rust resistance. 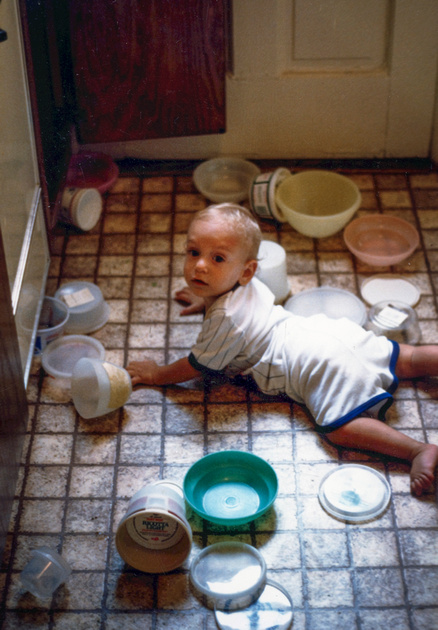 My son the college professor conducting an early experiment in kitchen organization, proving once again that the International Toy Complex stands no chance against simple plastic objects. The scanner and the computer have allowed me to time travel back to a simpler time on a kitchen floor 33 years ago and 3000 miles away. His father has promised his mother to organize our chaos of a Tupperware drawer this week - hopefully I will do a better job.