AUTUMN RAIN : A COLLECTION OF INTERPRETATIONS 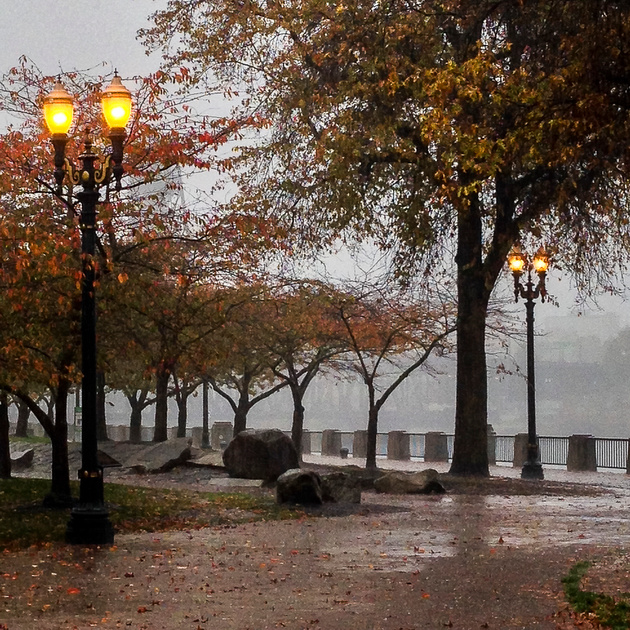 This week I would like to explore the idea that an image can support many interpretations, not just the one the photographer has labeled the "FINAL VERSION." There are many decisions that photographer makes along the way, and most of these are not "wrong" even though that photographer might eventually choose another path. Often it's just a matter of taste, or a desire to explore different interpretations of the same image. While you might actually like one of these paths better than my final version, that also doesn't prove that either of us is wrong. A fine image can support a number of interpretations, as I hope you will see in these examples. Most are carried out in the alchemy of post processing, and each of us has a different limit on what we can accept in the process of changing an image, and that is also okay - after all, this is my art. While the image could appear in the New York Times as the quintessential image of autumn in Portland, it didn't, so I'm allowed as much deviation from the "truth" as I want. Remember that is in my lifetime that the first color image appeared in the paper of record; now when a black and white photo makes the front page photographers sit up and take notice. 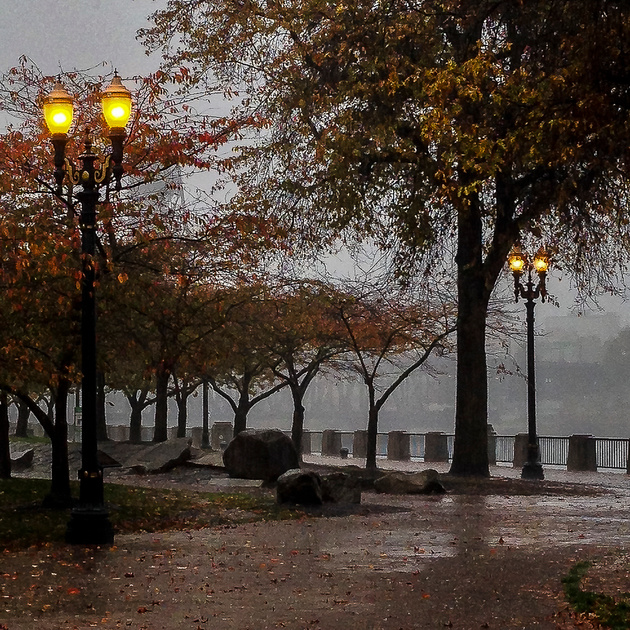 As you compare these two images, you can see that I didn't change much from the original color version. About all I did was increase the exposure by about 3/4 of a stop,well within the range of what you can do when you don't completely blow the exposure, which a professional like me doesn't admit to doing that often. The mood has been lightened, but it is still pretty somber. This is the view from my tent at Saturday Market at the end of October in 2015. I am not having a very good day, revenue wise, and have enough time to take out my phone and take this snap. This image proves how much detail you could get out of your phone seven years ago, even when taking an image that the phone is not really made for, like this urban landscape. I've done all the usual adjustments, like sharpening and it's opposite, noise reduction, and will attempt to keep these constant as we explore these options. 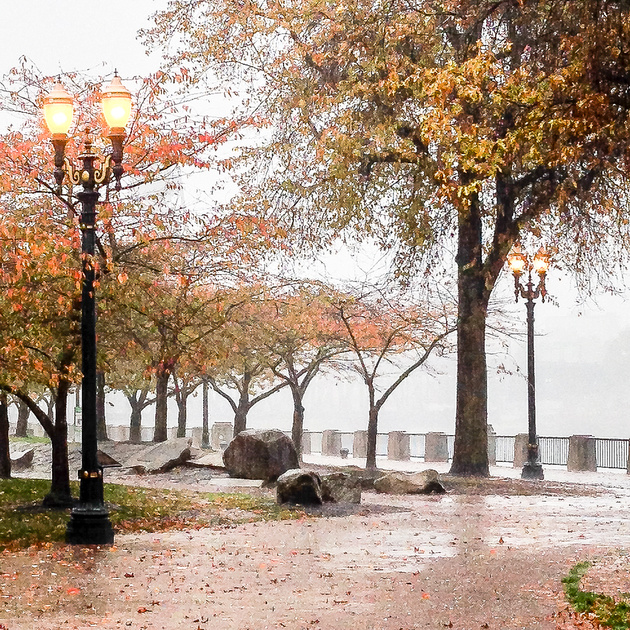 Here we've lightened the mood about as far as we can go. There only areas of the image that have blown out, even though I've increased the exposure by two stops, are the specular highlights of the streetlamps that have just turned on. The only trouble is that in color we've lost a little realism, since we don't know why the lights are on at all. 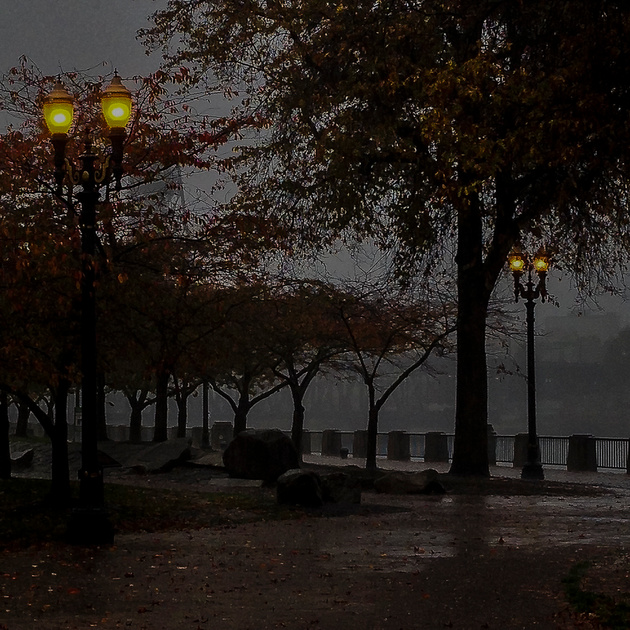 While I took this image at about 3:00 PM, it now looks like it's at least 8:00 PM, and I'm safely back at home. What is again interesting is that the only area of the image that is actually underexposed is the nearest light pole. While our vision is used to the idea that color saturation fades as night sets in, I think you will see that these two extremes look much more realistic when we convert to black and white. That is why black and white can allow the photographer much more range for interpretation. 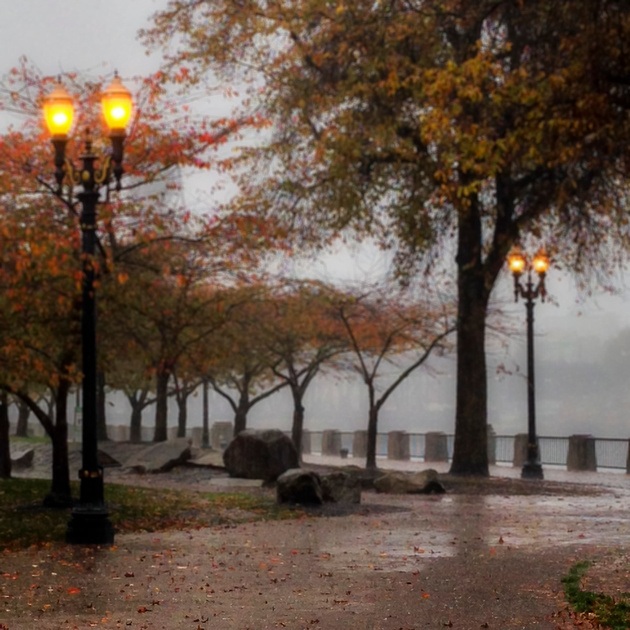 AUTUMN RAIN : IN THE RAIN

Before we head into black and white, I'd like to show a brief foray into deliberately changing the mood of the image. Here I've actually lowered the "clarity" of the image, using a tool that is normally used to subtly sharpen the image. By lowering the clarity, it now appears even more "rainy" than it actually was, almost as if the rain had hit the lens of my camera. Interesting. 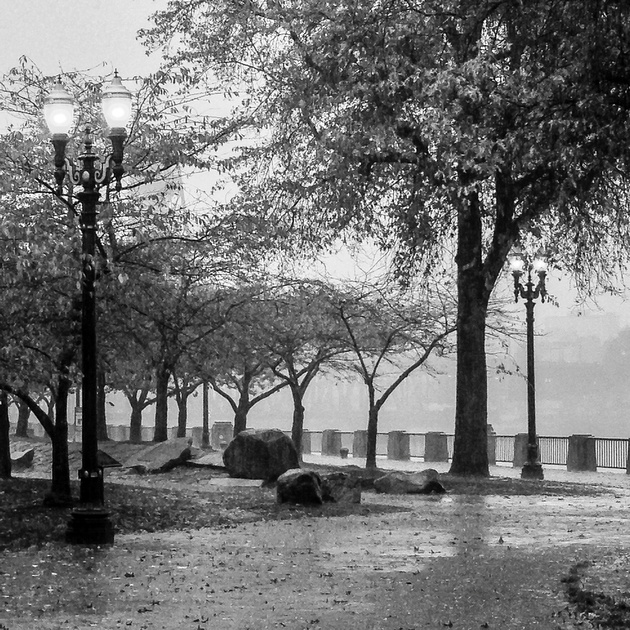 Here is the straight black and white conversion, with a little more detail perhaps, but also a touch more dismal in mood. From here we can get much more out of this image. 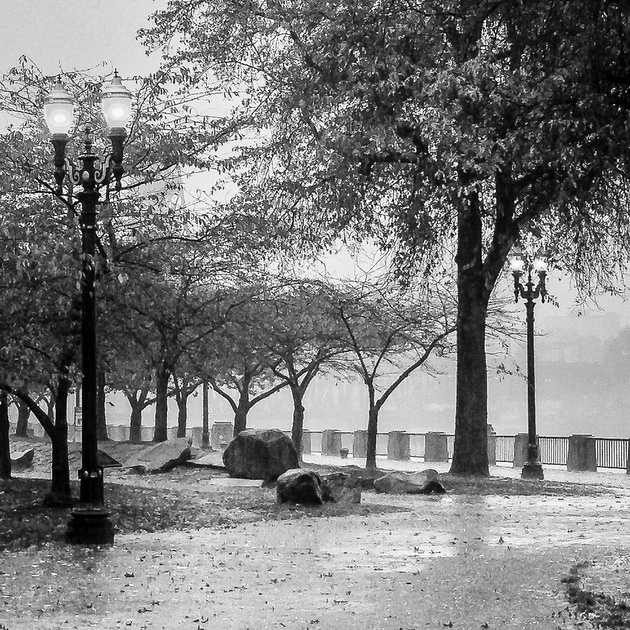 We can move toward a high-key interpretation by lightening the lower portion of the image. The foreground has now become more reflective, which implies that the sky above is actually lighter than it was at the time. 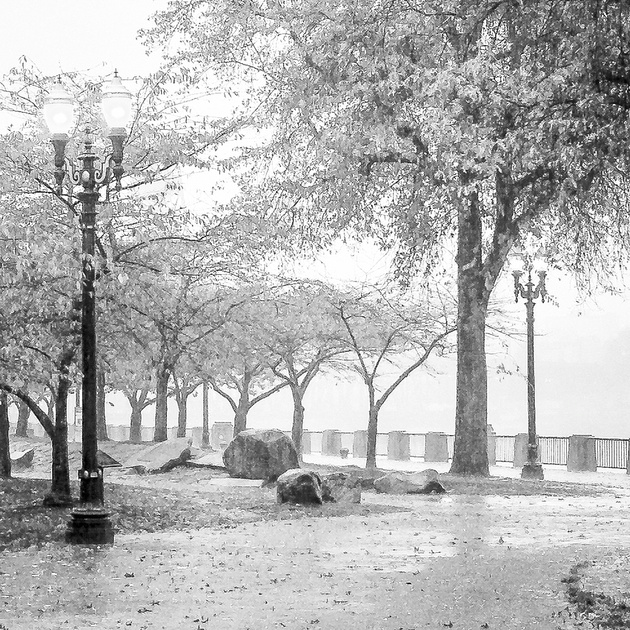 Here we've gone all the way - it now appears that this is a sun shower, and maybe in early March rather than October. You would swear that the Cherry Blossoms were pink rather than orange. The portion of the city across the river has completely disappeared in the fog, which is really heightened exposure. 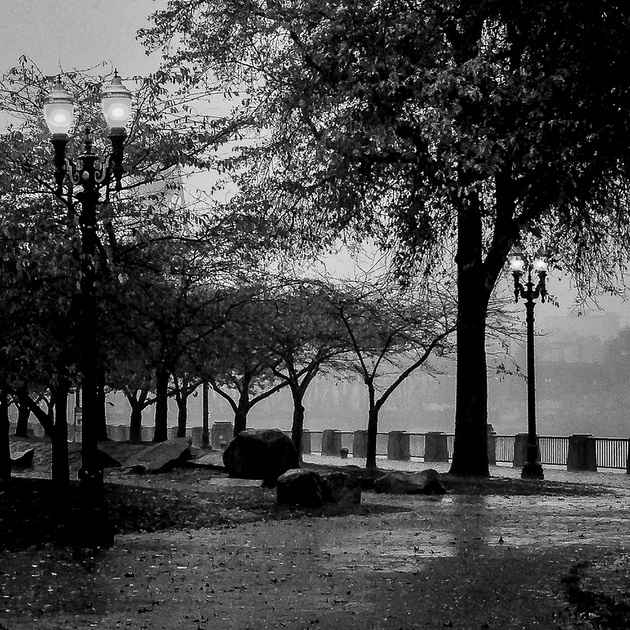 Moving towards low-key, and the mood has gotten a bit grimmer. I think this version is more realistic than the color version, but that's only my opinion. 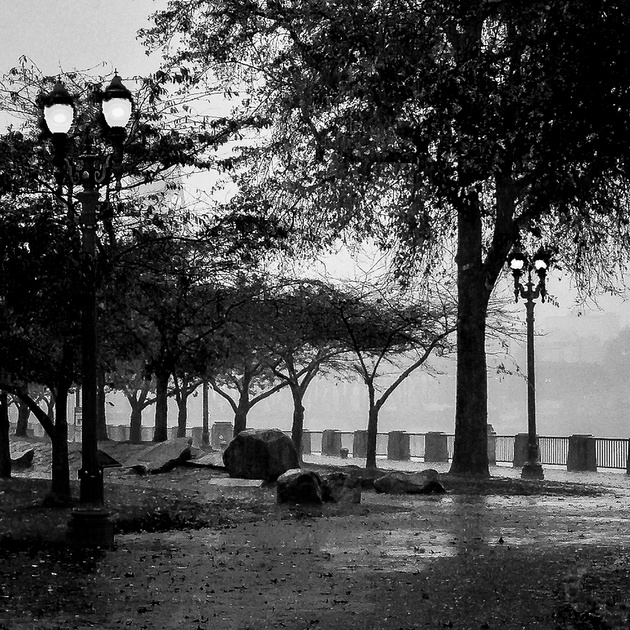 I've increased the contrast so much that even though the sky is brighter, it now appears that the lights are set for later in the day. In my opinion, it lends an air of private-eye mystery to this river bank in Portland. 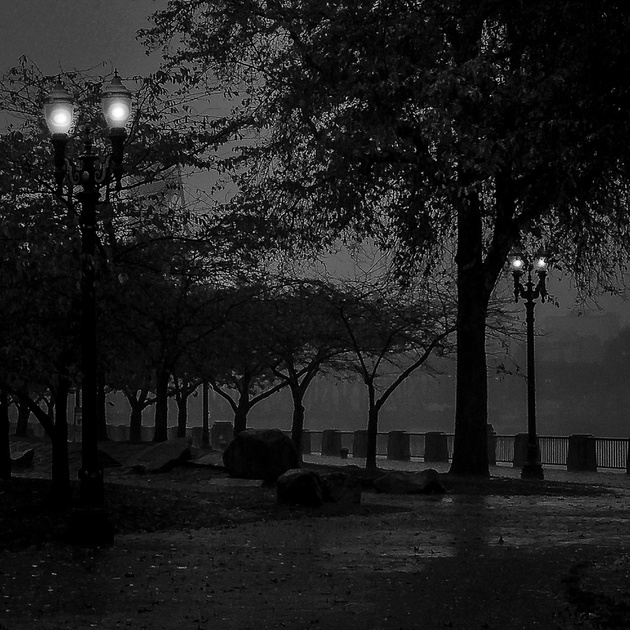 AUTUMN RAIN : 'ROUND ABOUT MIDNIGHT

I'm back in bed again, and I swear that often the night sky in Portland is this bright long after the lights come on, especially when you are near some streetlights. 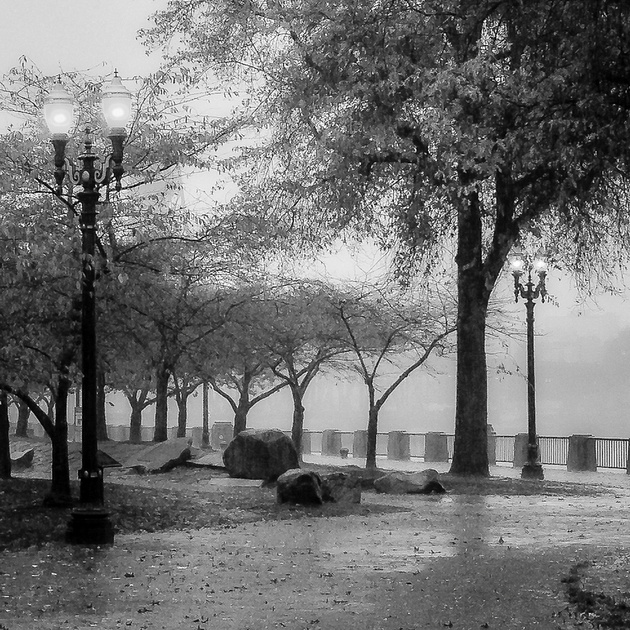 AUTUMN RAIN : BLACK AND WHITE IN THE RAIN

What is interesting to me is the same strategy to lower the clarity and to increase the"rain" seems to just muddle everything instead of heightening the humid mood. This is one of the few times that the technique seems to work better in color. 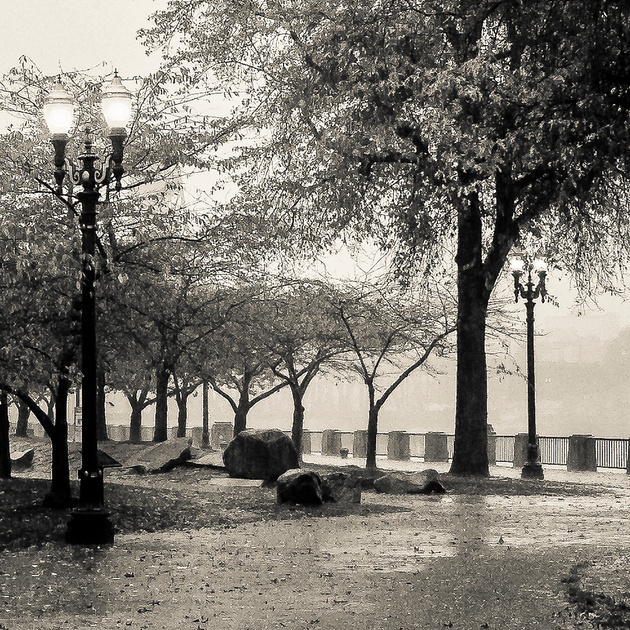 It is now time to enter the wonderful world of toned images. These are still black and white, but with an added tone that subtly or weirdly colors them, depending on your point of view. They are monochromatic, but no longer true black and white. Most of the time the lightest portions of the image are most affected, which can affect the mood of the image. The fact that they can appear to make the images appear even more nostalgic is due to their origins in the darkroom. Prints were toned with additional toxic chemicals in order to increase their durability, and photographers either accepted or delighted in the color shifts these chemical preservatives lent to the image. The fact that we no longer need to do this speaks to their becoming a part of photographic history that speaks to mood rather than just nostalgia. Most black and white photographers I know actually prefer this warm tone, but I am in the minority who prefers his whites whiter, even though I know I'm being picky. 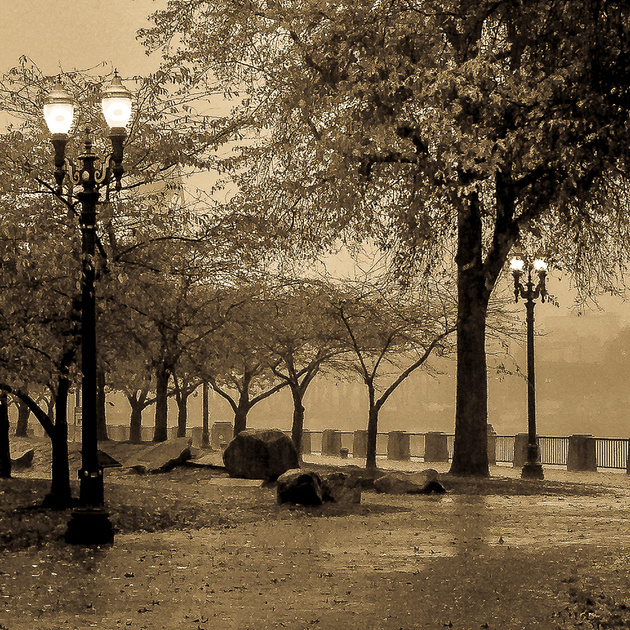 Lightroom calls this preset "Aged Photo" which is just a little too poetic for my taste, but it resembles a gold-toned photo. If you're going to used a chemical toner, you might as well go for the gold. This was pretty expensive, until platinum printing came along. 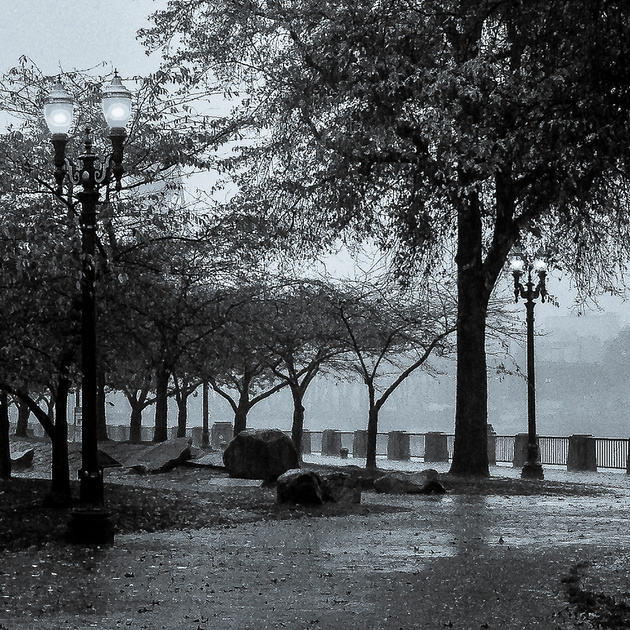 Now this is more to my taste, but you might not share my opinion. The chemical selenium lends a subtle blue note to the proceedings, and since I love Jazz as well as cooler tones, it is a natural for me. I equate the blue tones with water, so this water-logged scene speaks to me. 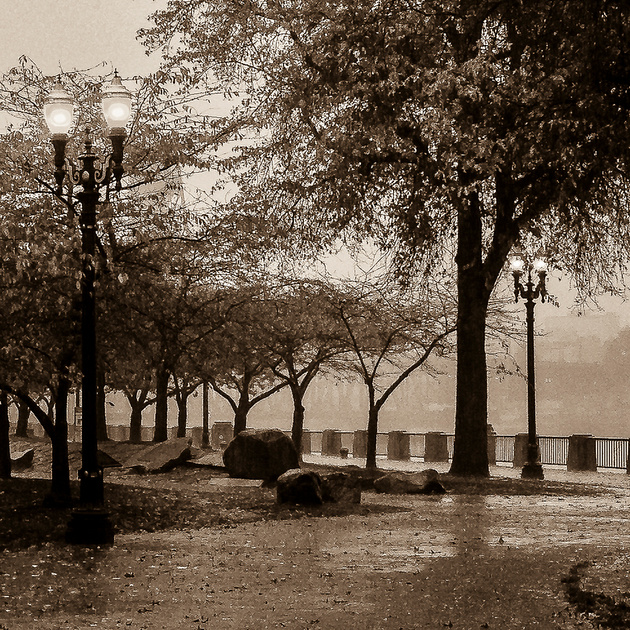 This option, in my opinion, is to nostalgic  for its own good. The brown sepia tone was the most popular chemical tone, and almost screams 1886. This scene would not contain the park, or the sea wall, but would show plenty of wharves and ships. My taste, as I said, tends toward cooler tones anyway. 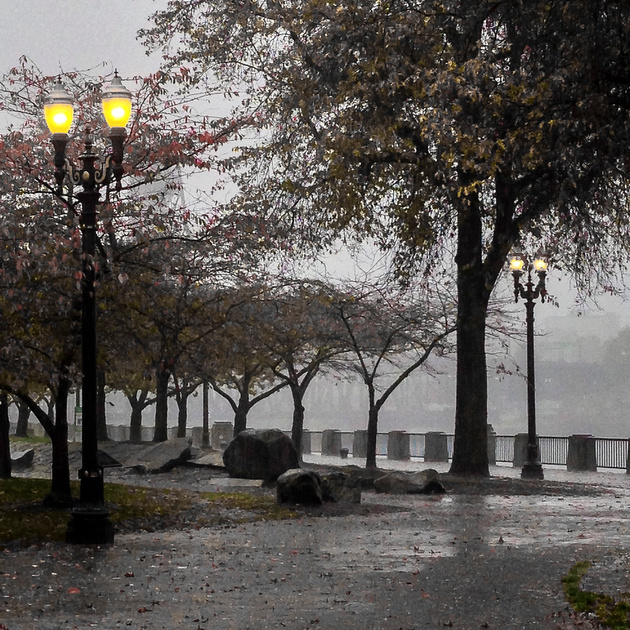 While I don't think by any means that we've explored all of the possibilities, we have gone pretty far afield from the original image. This final image explores the surreal by only selectively de-saturating  the image. Only when you have inspected the image for awhile do you wonder why those vintage streetlamps seem to be in color on an otherwise bleak black and white day. I just de-saturated everything except yellow, and only a little of the fallen yellow leaves follow along with the lights. Black and white allows us to go way beyond reality without spoiling our fun, since we have already accepted the abstract notion of black and white itself.

I hope you have enjoyed this trip through some of the possibilities of an image, once you accept that you are in fact in control of the viewers perceptions through post-processing manipulation. What is funny is that this grim day seven years ago was a lot more fun than last Saturday at the Market, which saw me abandon ship for the first time in a dozen years. I shouldn't have gone at all, but after two hours of set-up and two failures of trying to erect my booth, I showed enough maturity (my wife's words) to give up and come home. I had to sprint  to catch my runaway tent, saved only by the port-a-potties from ending up in the middle of Naito Boulevard. Please feel free to comment with your favorite interpretation , and wish me luck this last weekend of the year at the Market.