ABOVE ALL - NEVER TAKE ANYTHING FOR GRANTED

Today I'd like to recount a hike I took in the Columbia River Gorge four years ago this summer using half a dozen or so photos that I took that day to recount the area's natural beauty, as distilled by one photographer. Some of these images are pretty characteristic of this particular hike; some are more related to my idiosyncratic style of landscape photography. I had a wonderful day, and came away with more "keepers" than usual. But the most important lesson I learned that day, or more accurately four days later, was to absolutely try to never take anything for granted.

My hike was not very heroic - just a couple of miles in and back on one of the Gorge's most famous trails which is hiked by tens of thousands each year. The Eagle Creek Trail actually extends for another twelve miles into the wilderness before it connects with even more trails in the back country. Punch Bowl Falls, where I stopped for lunch, is actually about the first landmark that wusses like me are allowed to turn back towards civilization while maintaining a modicum of respect with real hikers.

Yet no one has hiked this trail in four years, because four days after I enjoyed it a group of idiotic teenagers, playing with fireworks, managed to burn down thousands of acres of the Gorge while they were on this trail. Through the heroic efforts of firefighters and just plain dumb luck, the damage was barely held in check so that one can say it was a lot better than it could have been. But years later there are a number of beloved trails and whole areas of the Gorge that are still off limits. 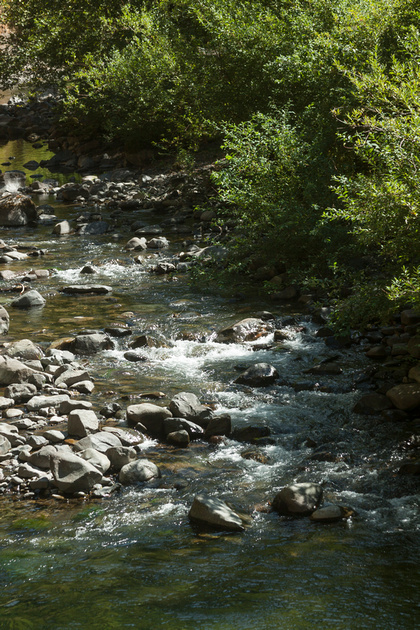 Like most Gorge trails, Eagle Creek starts off with a pretty tame section just off the trail head, where I enjoyed the shade and the creek. It's less than an hour from my home in Portland, just off the highway. And it's usually ten degrees cooler on a hot Portland summer day, and my self employment allows me to go on a random Wednesday morning where I will encounter few other hikers. 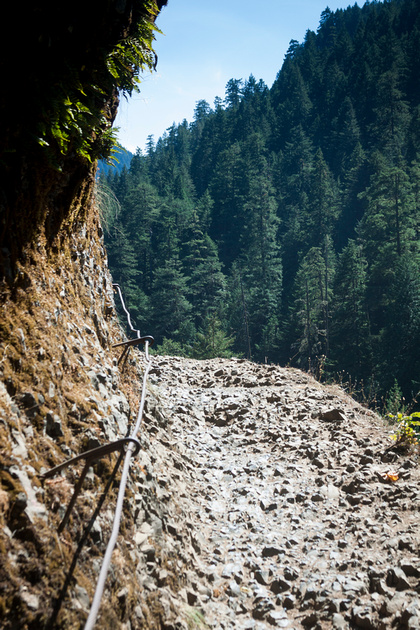 And then the trail begins to climb and becomes famous. As Gorge trails go, the elevation gain is nothing to brag about, but the sense of exposure is palpable. While there is very little real danger, let's just say that you begin to concentrate. You are walking on a path cut into the cliff, with a drop that gets progressively deeper the farther you go up the trail. On the left someone, probably Roosevelt's Civilian Conservation Corps, has provided a steel cable to hold onto; while it is often not "necessary", you really appreciate it when the path narrows and it suddenly becomes very reassuring. It's the kind of trail where you quickly resolve that any asshole who "needs" to pass you will do it on the outside, thank you very much. 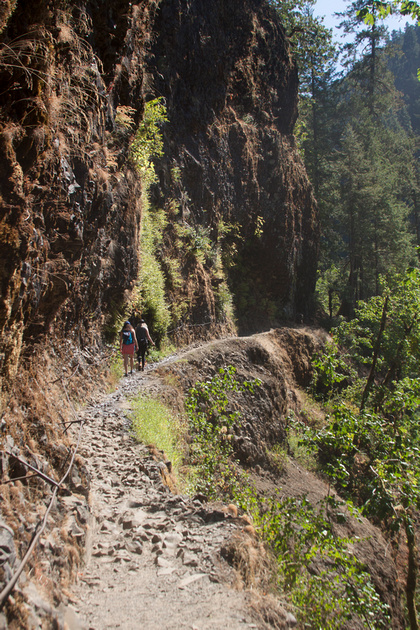 This pair of women were a little ahead of me, and I had no desire to pass them on the trail. Eagle Creek reminds me of my family's trip across the country on the "Oregon Trail" in 1992. At our first stop in Badlands National Park, I watched my four-year old son casually jaunt across the parking lot to a viewpoint, no fence, nothing, and quickly held my breath, and his hand, when I saw an unprotected drop of hundreds of feet. We were not in Virginia anymore. The West relies on a more Darwinian recreational ethos. 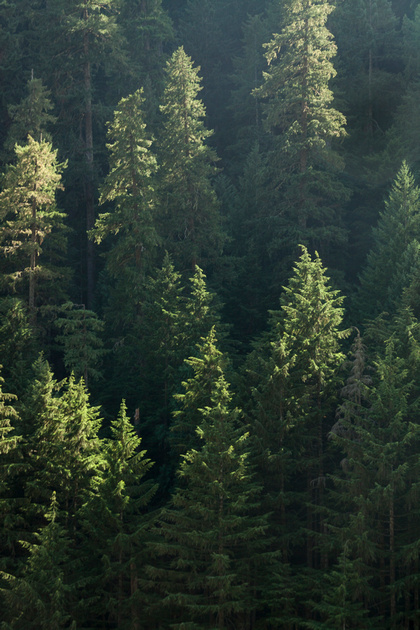 In any case the views are breathtaking; here's a typical sun-dappled scene of the forest hundreds of feet below. It almost screams Oregon. 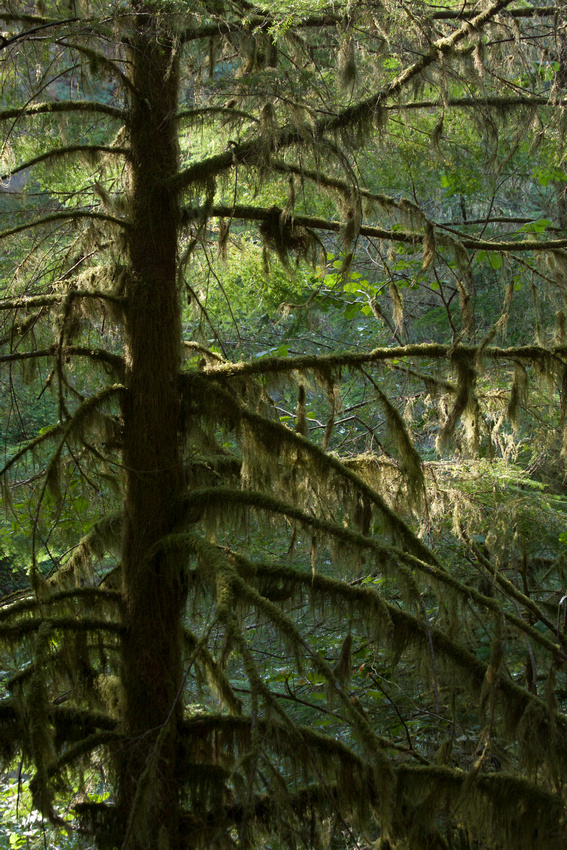 A short time later the woods again surrounded the trail and revealed the complexity of the fight for sunshine in the Gorge, where many trees are completely overtaken by the moss. I later realized that this scene was very near where the fire started, only one mile up the trail. 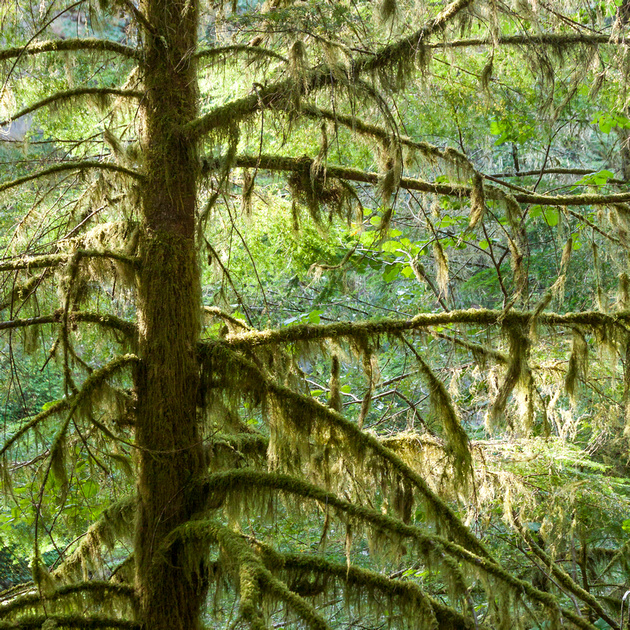 This is my image, "Eagle Creek Moss" after post-processing; raising the exposure, cropping for a coaster, and sharpening to ensure the perception of the beautiful moss detail. Manipulating the exposure also brought out the darker tree to separate it from the lighter background. 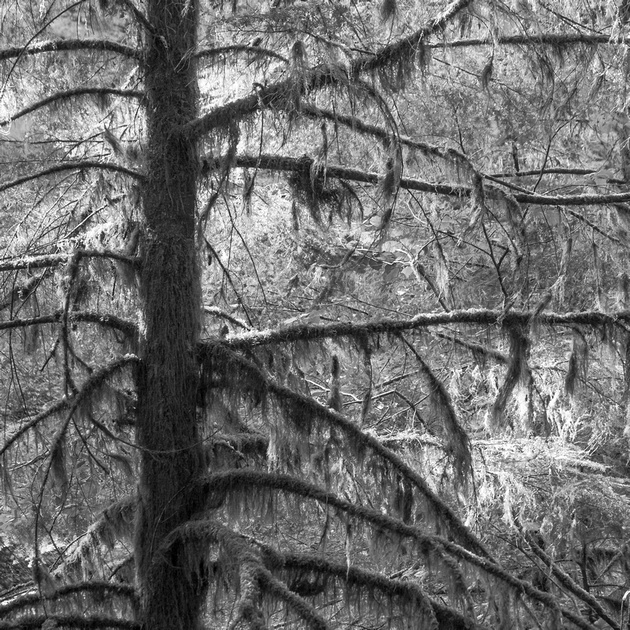 The Black and White version exhibits the usual monochromatic strength in emphasizing details even more, but in this case I do miss the overarching sense of Green. 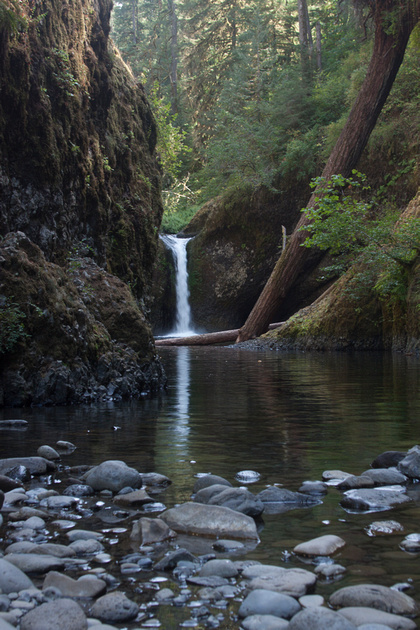 The culmination of at least my hike was Punch Bowl Falls, about two miles in. I sat on a broad field of rocks surrounding the pool eating my sandwich, and taking many photographs - should I include the rocks, or narrow the view? Should I care more about the reflection, or the overall scene? After a dozen or so alternatives, I focused on this image, knowing that I would probably concentrate on the falls and reduce the trees beyond. All of this while ignoring the young man who insisted on jumping into the pool from the top of the falls, wondering if he expected to me to come to his aid if he cracked his neck. 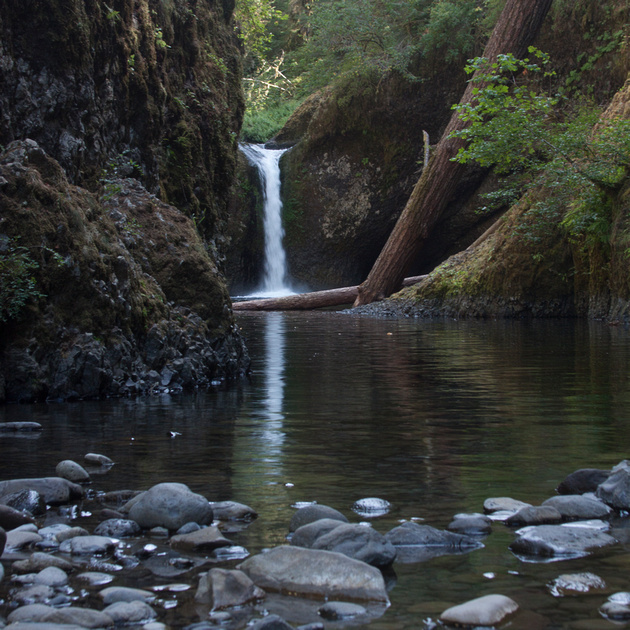 Cropped to a square, emphasizing the falls and their reflection in the pool, but keeping the rocks in the foreground.

My usual post-processing brings out the "pop" through a more accurate white balance (the forest tends to the cool blue), subtle saturation, and darkening the foreground rocks a bit to further highlight the waterfall. 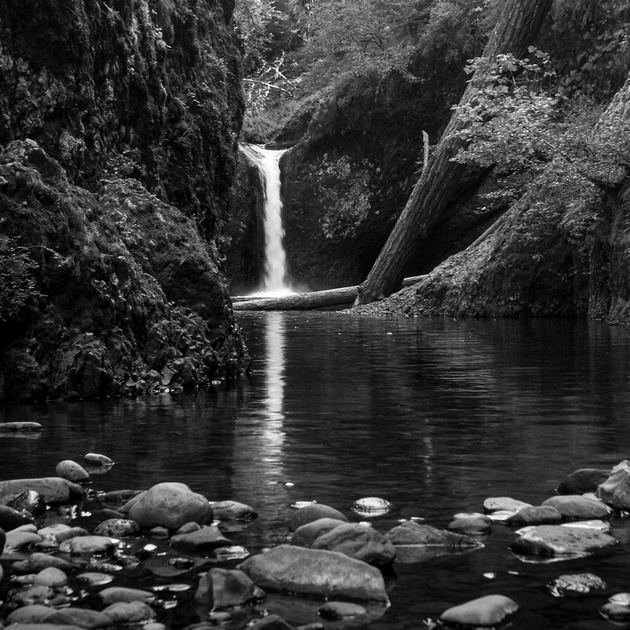 We lose the green against brown contrast in the monochrome version, but it allows for a darker pool and subtle darkening of the woods above the falls and the tree to the right; the rocks are even less distracting. 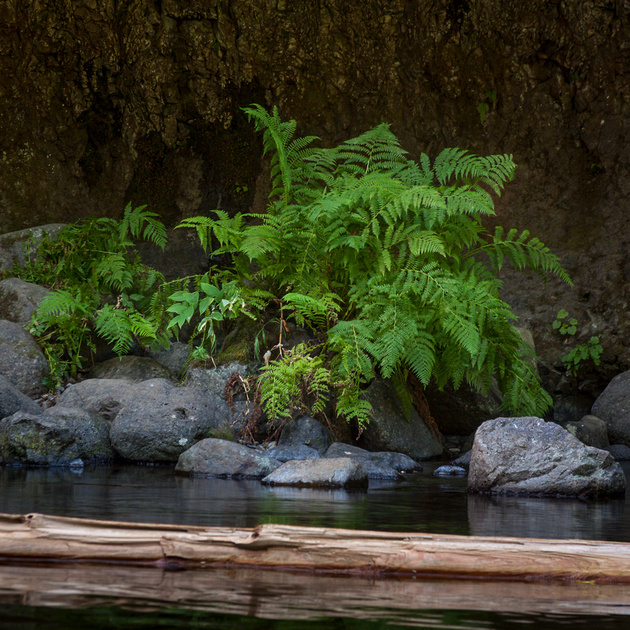 I also explored details around the pool (waterfalls aren't everything, you know) and came up with this intimate landscape near my lunch spot. A few days later a group of about thirty hikers near my lunch spot were forced to stay overnight in the middle of a forest fire, and then take the long way (twelve miles) around to get off the trail. The trail is still closed, and few know what these scenes now look like; we can only hope that we will soon be able to return.