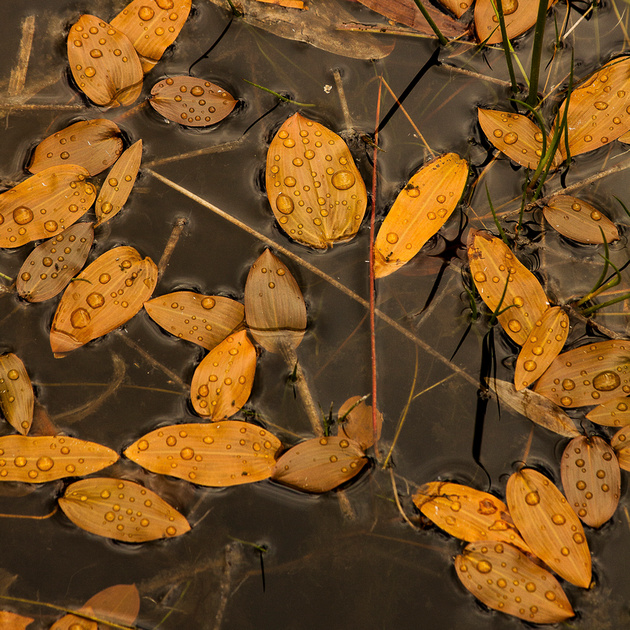 Today I'd like to use several of my images to discuss the virtues of the intimate landscape. I use this term to describe a landscape photograph that highlights a very detailed view of the landscape. This view is not necessarily a macro view, nor is it abstract - it has a generally understood subject, is of a natural subject, but the landscape is so limited that the viewer can only sense a mood, or a time, or a season, while the geographic location is unknown or unimportant. The viewer knows what they are looking at, but has no idea where it is on Earth.

The intimate landscape requires an interesting subject in the sense that its elements are attractively framed and distributed in the image. In this it is like a still life, but the photographer has probably not changed the real scene, although moving a leaf or rock is not like removing a Soviet official  from the annual Red Square lineup. And post-processing now allows us to remove "distractions" from our captured images, so one must keep their own consciences intact when presenting "reality" as they saw it. Always remember of course that the mere act of "framing" is a personal  artistic decision, as is the exposure that can emphasize different aspects of the image. My view is that an intimate landscape should remain close enough to the truth because its real value is what it reveals about the photographer's ability to "see" order in what is frequently a chaotic natural world.

This image is a portrait of a small part of a wetland, also known as a swamp, at the Brietenbush Nature trail in the Columbia Gorge. Of course it could be anywhere in the world, unless you know more botany than I do. And if someone said, "I know where that is" they would either be me, lying, or a psychic. The colors and arrangement and the rain drops attracted me, and made me look and shoot. I subsequently made a framing decision to create a square photo coaster, added my usual subtle saturation, vibrance and sharpening modifications which are pretty reasonable to make a digital photo "pop." Most importantly I reduced the exposure and the shadows since I was not at all interested in seeing the tangled swamp bottom below the surface of the water. Beyond that, it was important to me, and probably no one else, to not cut off that bottom leaf. Way later I realized how much I liked that red branch i near the center. 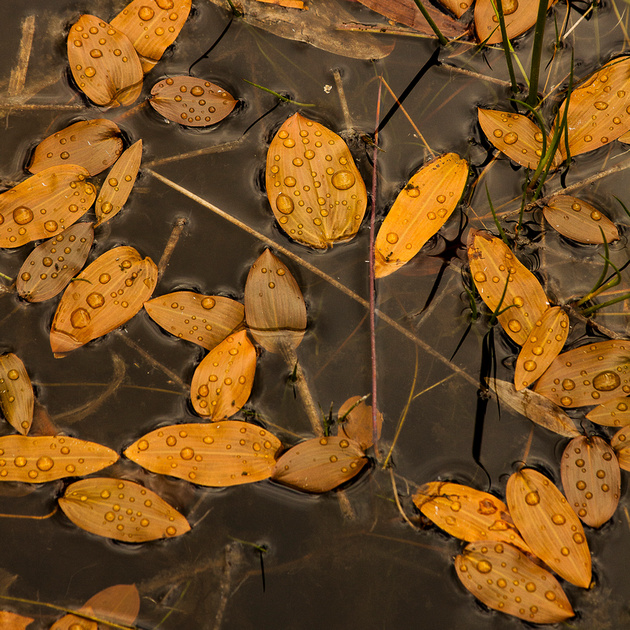 Look what happens when I reduced the saturation of that branch (which Lightroom informed me was "orange" , just like the brown leaves). I feel the image suffers, but maybe it's just me. 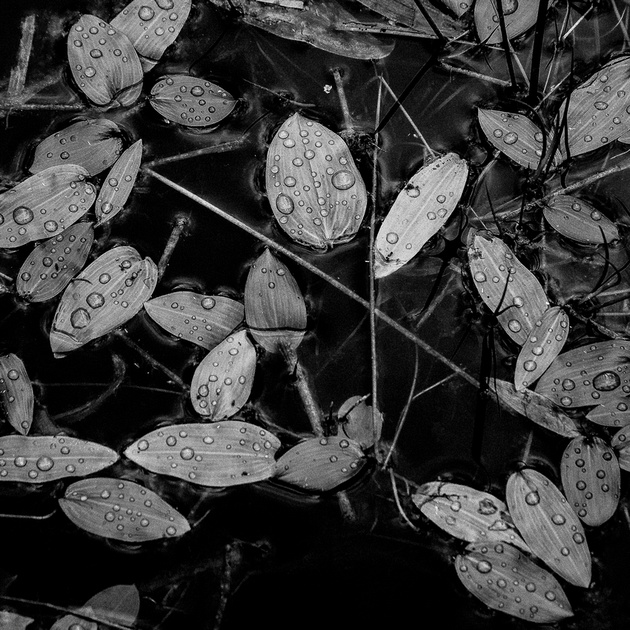 And while I love black and white as much as the next guy (and probably more) I think we lose a little here, although I really like the deeper black water. I might even be tempted to go back to my final image and further reduce the shadows, but lets look at another image. 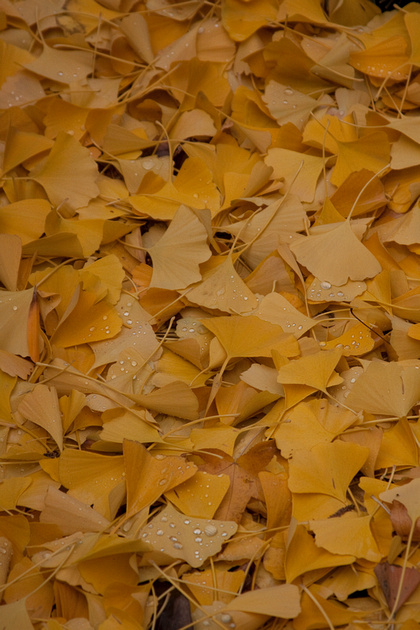 I noticed a pile of Gingko leaves before I even entered the Lan-Su Chinese Garden, one of my favorite spots in Portland. It's important in these intimate shots to try to avoid any borders of the pattern to try to convince the viewer that this scene goes on forever, or at least far longer than in real life. This is the result of my post-processing: 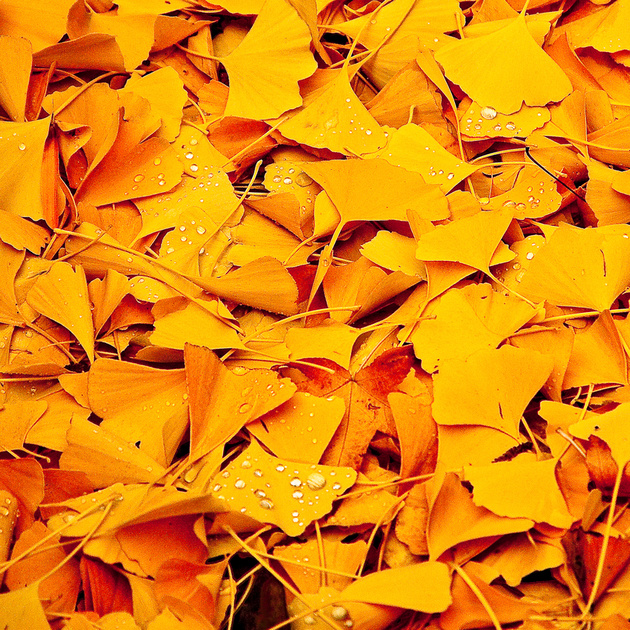 Now I've cropped to my coaster square, raised the contrast and the saturation high enough to highlight the different yellows and oranges that were present in real life, and sharpened enough to really see those drops and the distinctive shapes of the leaves. While some might think that I've gone too far, they wouldn't be those people who know Gingkos. 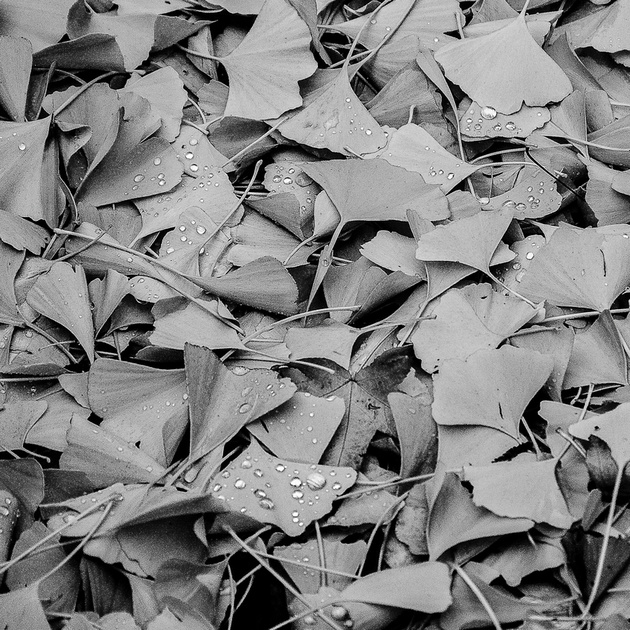 Another black and white that seems to be okay, but just okay. It pays to reason that when an image is really about color, it loses something when  the color is taken away.

Another day, another swamp. 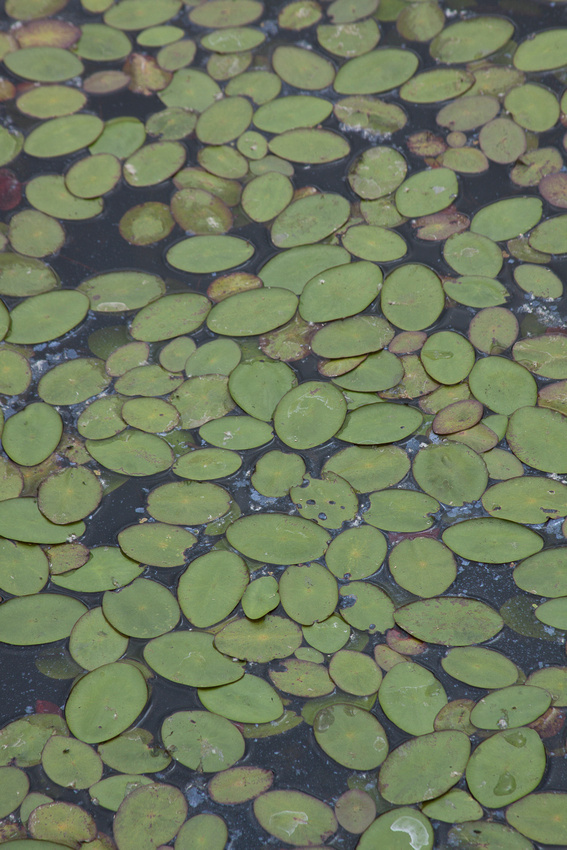 My wife really seems to love wetlands, so I do what I can as we hike the boardwalks provided by the government, this time at the Nisqually Natinal Wildlife Refuge in Washington State. I was intrigued by the struggle the leaves were engaged in to overlap each other and grab some infrequent sun. 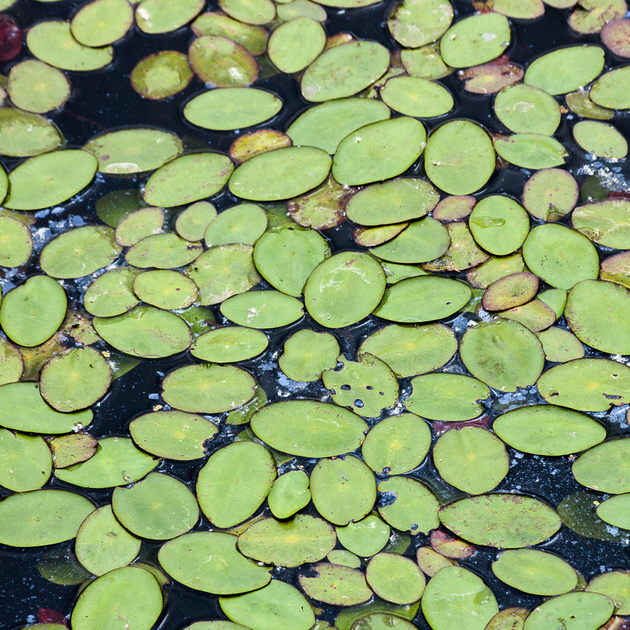 You can see here that my square crop went for as much water as I could find; then I increased contrast and saturation to highlight the leaves. The necessary sharpening actually bought out the fact that the leaves have almost concave edges that keep them afloat. 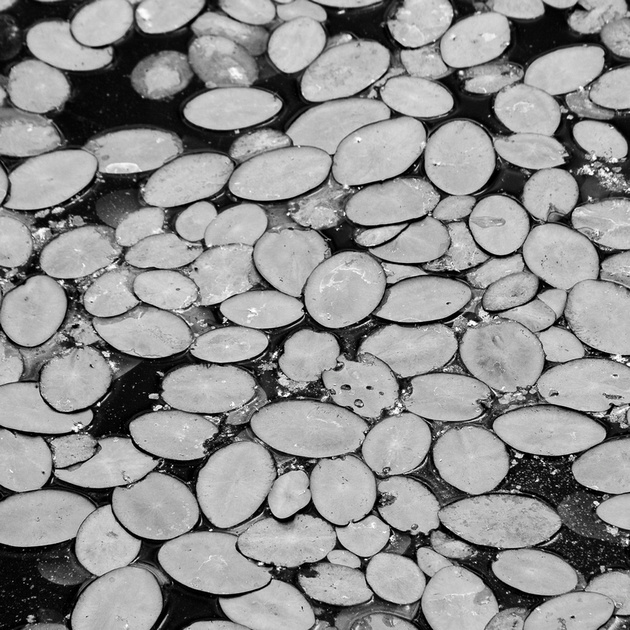 I am not really a green fan, but I will admit that something has been lost here. The shapes are still here, but there doesn't seem to be enough variation between the leaves to make up for the lack of color.

So I hope you can find some inspiration to look closer the next time you are out in nature, to try to see the intimate landscape within the overall view. It can really help you find more images  out in the world that will especially be your own, not those views duplicated in everyone's instagram feed.