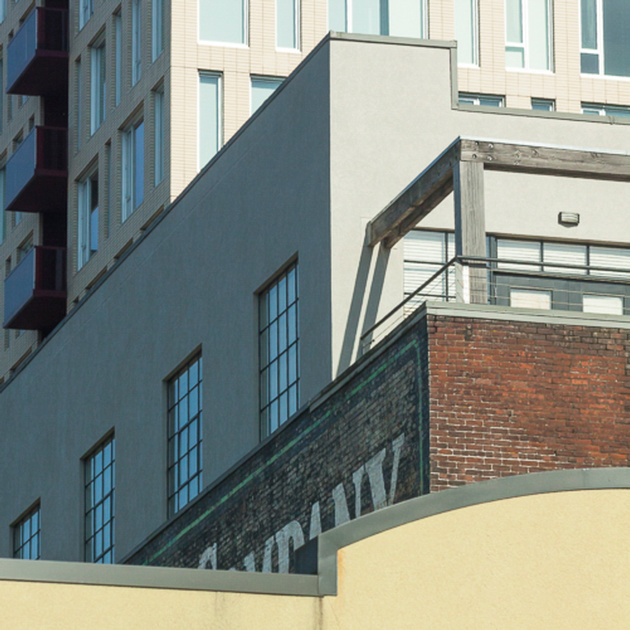 Today I would like to discuss the concept of juxtaposition as it relates to photographic composition. Juxtaposition is defined in the dictionary as "the act of placing two or more things side by side in order to create an interesting effect." For an English major, the blue book invitation to "compare and contrast" sums up the entire enterprise of literary criticism. For photographers it can be an effective visual strategy, highlighting visual differences of scale, texture, color, or shape through these contrasts, which can be more interesting than just a singular focus. I myself have started to use it in my forays around the city, searching for new compositions in very familiar places. It allows me to see the city differently, once again ignoring the documentary "subject" to produce images that are uniquely my own. 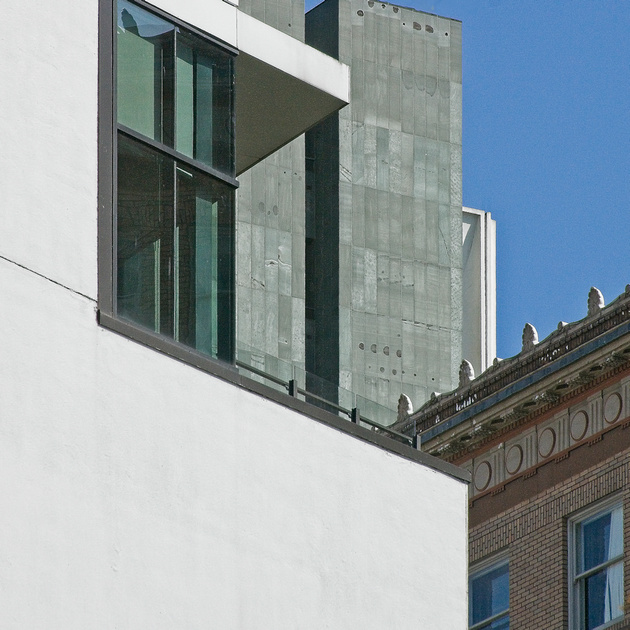 I'm experimenting with finding disorder out of order, which is the opposite of most photographic pursuits. I am creating collages, but I have to deal with the real world collisions I find in the viewfinder. My standard lens choice in the telephoto range allows me to do two things to heighten the effect I'm going for. It encourages the framing of distant snippets of visual information with its reach, allowing me to see further than the naked eye. It not only foreshortens my distance from the various parts of the collage, but the telephoto effect also crunches the apparent distance between the various parts. The result is a personal city whose graphic collisions, relieved in some respects from ordinary perspective, can occur despite real distances of blocks or even miles. The camera's eye, an immovable two dimensional plane, has replaced the three dimensional human perspective. My framing has also prevented the viewer from "looking around" to increase their frame of reference. It's like trying to catch a football with one eye closed. 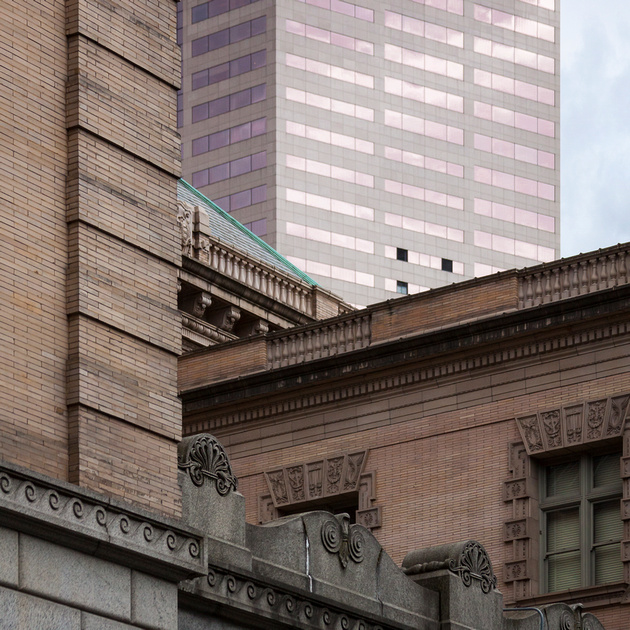 In this compare and contrast sweepstakes, I can use several visual cues to generate the collage. These include textures, colors, architectural styles and materials, and the opposition of lines that will reduce the perspective, in some instances so much that it will lead to viewer disorientation. Fragmentation and the resulting shapes that these fragments take can become more important than the real facades. In the example above, what appears to be three colliding buildings is in fact parts of one structure, the apparent differences of color owing to light and shadow. Big Pink's historical distance is distorted by the fact that it is at least a quarter of a mile in the distance, not across the street.

I think that my first attempt in this series is the most successful. The color palette helps, with enough differences to go along with the harmonization; thus the yellow curve moves forward and those weird red balconies behave themselves in the distance. What's funny here is that my contrast is actually heightened by reality, since what appears to be four different buildings are actually only three - the light grey building is actually a contrasting penthouse addition to the brick building  with its ancient painted advertising. But I think that the most important decision was to eliminate any sky, which increases the graphic quality of the image - this first image doesn't "leak."

I do not believe any of these images work better in black and white. The usual increase in the textural detail of the shot does not make up for the loss of color contrasts. Perhaps #2 works best in monochrome because the white building fragment is as white in color as it is in black and white. I never thought I'd say this, but I really miss the green marble elevator shaft in the monochrome version, especially its glow through the foreground windows. I would also emphasize the importance of framing in these collages, since they are invariably graphically stronger than the original frames. 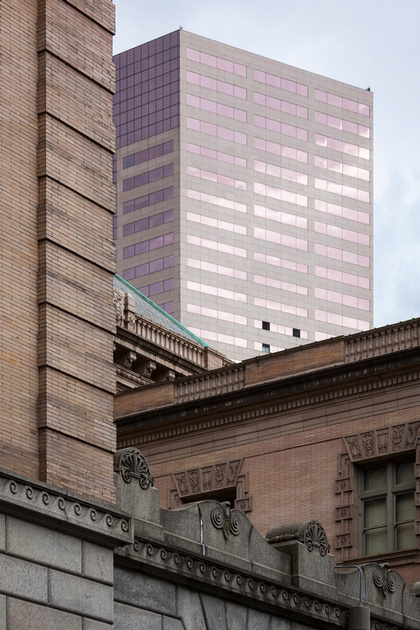 The original framing was not tight enough; the photo seems to be about Big Pink, complete with its top, and reality has reared its ugly head.

There are other ways I have used juxtaposition beyond this named series. Sometimes I use color contrasts, especially when that seemed to be the original strategy of the designer - I'm just going along. 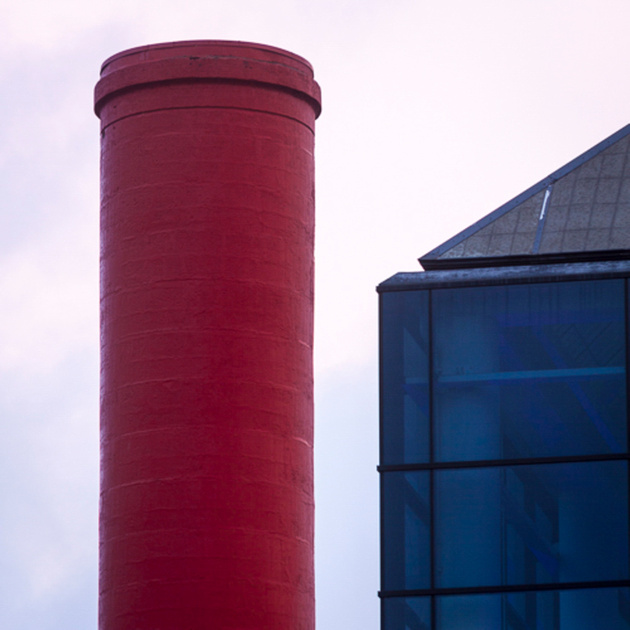 Here I pose the famous "red or blue pill" question by juxtaposing these two elements of the OMSI Science Museum, its newly created blue glass entry hall and its painted legacy turbine smokestack. My framing places them much closer than they are in reality to heighten the choice of colors, and the fragments make it all about those colors. 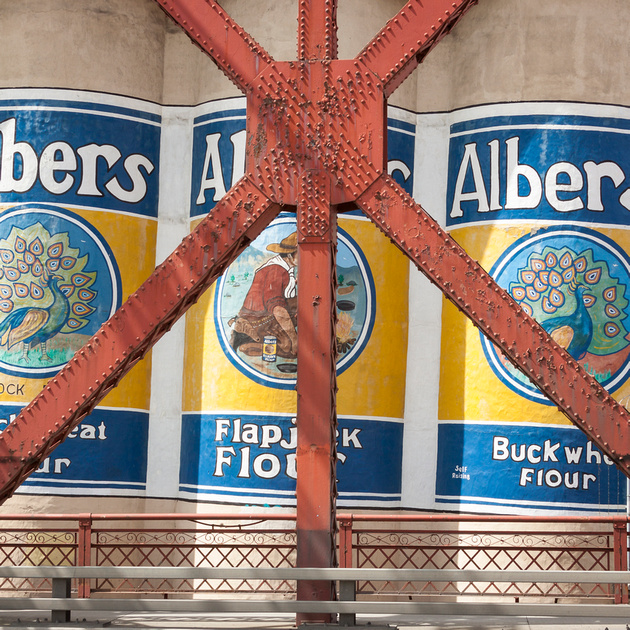 Here I let reality supply the collage. These flour package murals ornament the side of a grain elevator located beyond the Broadway Bridge. They are not this close, but my telephoto makes it look the bridge narrowly missed the grain elevator. My framing centered on the bridge truss, rendering it vertical and symmetrical, avoids the reality that nothing is really straight here, since the bridge is actually sloped while the grain elevator is not leaning. 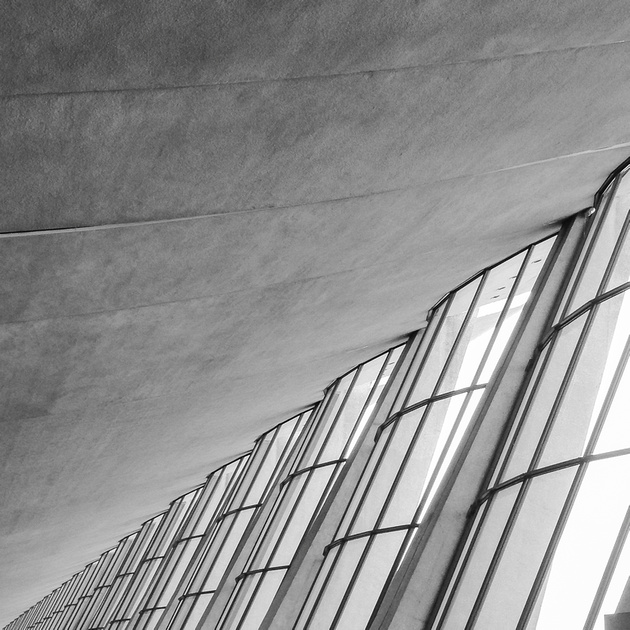 How do you comment on a building that is actually a sculpture? Dulles Airport outside Washington, D.C. is just such a building. Absolutely beautiful and simple to the point that any functional reality of an "airport" is a jarring jolt to a visitor's sensibilities even while the frustrations of actually getting on an airplane drive you crazy. My interpretation contrasts the structure's two elements - it sloping concrete ceiling and pristine curtain wall of glass and concrete pillars. Notice how the columns seem to have nothing to do with the ceiling - they just collide. This juxtaposition is my subject. I've avoided people, ticket counters, and doors, all of which just annoy in contrast with this incredible space. Is there much more to this place? Not really, because only one element of the entire composition, the vertical control tower, is missing in this interior view. Eero Saarinen, the architect/sculptor here (he also created the Arch in St Louis) so wanted to isolate his pure form that he had to create special double-decker articulated buses to get passengers to planes to avoid the usual gangways. Even when they expanded the airport, the new terminal was only reached by a subway tunnel so as not to distract from this cathedral. 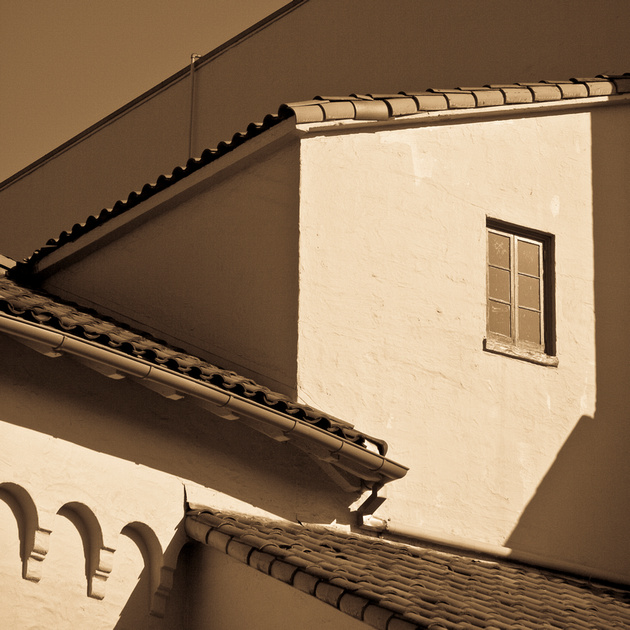 This isolated collage of elements of one building - the Bagdad Movie Theater - reduces a portion of the structure to a contradictory assemblage of angled roofs, walls, volumes, and strong sunlit surfaces with contrasting shadows. Most of the architectural order has been lost, and if you didn't know it was the rear corner of the theater it would be completely anonymous. The graphic quality is helped by the sepia toning, which renders the sky as maybe just another part of the stuccoed structure. 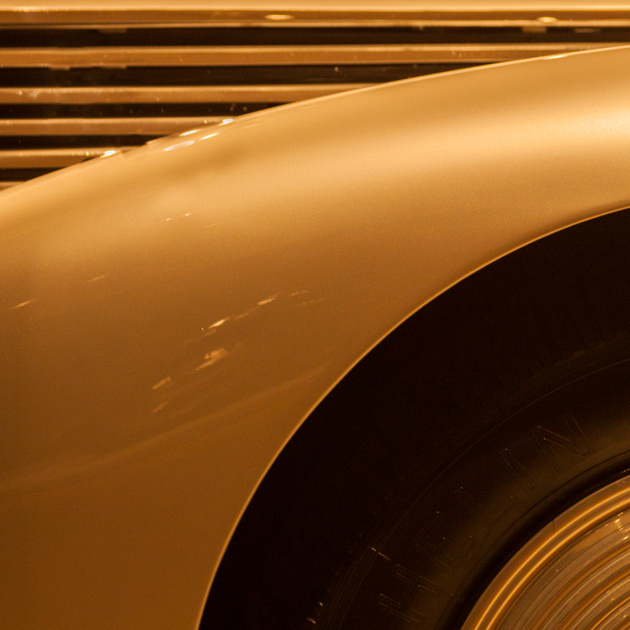 And finally here is my attempt at getting something from a very beautiful nothing at a classical auto show. I have tried to so isolate the elements of this incredible sheet metal sculpture that once graced the street to the point that it's barely a car anymore. Only an expert could possibly tell you what this collection of shapes was part of a celebrated model of automobile. These fragments of color and shape are my attempt to convey luxury beyond reason without actually revealing the object - or the floor, the stanchions, the ropes and also the people ogling the automobile in question.

I once again encourage you to try finding subjects for your photography without being a slave to the real object in your viewfinder. Remember, sometimes the parts are the most important subjects of all.