LOOKING FOR LINES IN ALL THE RIGHT PLACES 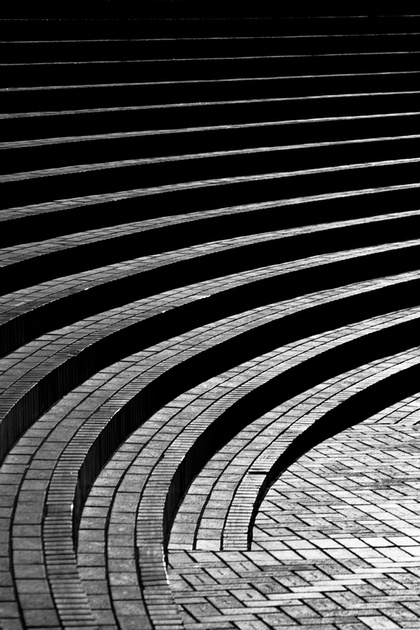 This week I'd like to discuss a strategy you might adopt on your next foray out with you camera. It is based on the age-old question of "what the hell am I going to shoot today?" This is not especially applicable on your first trip to Paris, a portrait session, or a still life - although I could argue that even then it might loosen your photographic angst. I'm talking about going for a stroll in a very familiar location, one in which you've already taken all of the "bucket list" shots, such as they are, and are looking for an excuse to carry your camera and practice your hobby. How can I open my eyes today? 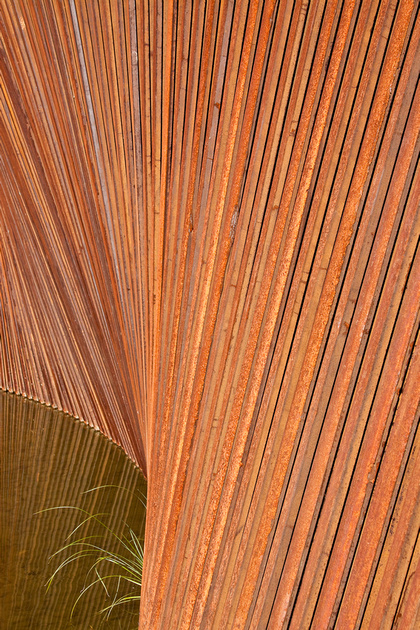 Please note that I am not telling you to actively plan to shoot shadows, or yellow colors, or silhouettes, or people's hands - I'm just suggesting that you might try something like that in a relaxed manner, as an additional excuse to find something to shoot. The object here is to expand your vision, as is my usual goal, beyond the documentary approach - can you find the "wow" factor without giving a hoot about the subject? This is not dependent on how abstract your eventual product is; just because a "subject" might be still apparent, that is not why you made the image. A photograph is simply an artifact of your eyes being at a particular place at a particular time. You decide what to express in your image. 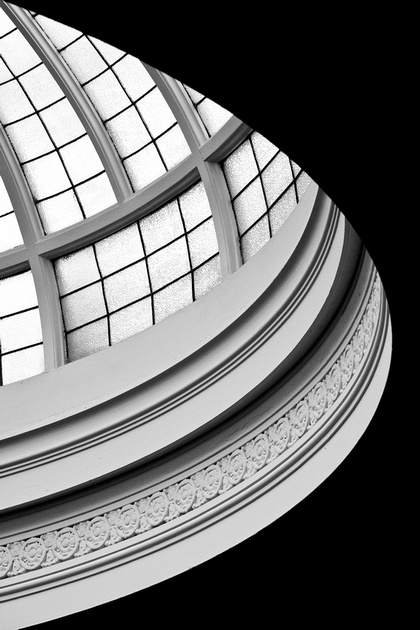 I have found it very helpful to allow myself to see other things besides the obvious subjects of my image - even if those are important to me too. I would put it this way - I'm taking a walk in the woods, or Downtown, and today I'll take anything I want- but I might allow myself to see colors, or shapes, or juxtapositions, or anything else, in addition to taking anything I want. In freeing yourself of subject constipation, don't put additional pressure on your mind - these are liberating SUGGESTIONS, not more rules to follow. If they result in a few experimental attempts, that's good enough.

These first three images line my entry foyer as a large tryptich, so I am obviously proud of them. They used to form the back wall of my tent at Saturday Market as well, until I became tired of carrying three large framed and mounted prints to the Market, and answering  the inevitable questions questions concerning the image's subjects. Now , the subject is right there in the title, because I am interested in these subjects, even if nobody else is, and I am not interested in playing games. "Untitled #18" is a title, whether the photographer likes it or not, and in my mind just denotes a lack of wit. So, yes, these photos happen to show a portion of a public square, a sculpture in a park, and a part of a library skylight. They are all in Portland, and I have used them in photo books about Portland.

But I will admit and insist that the subject of all three images are LINES. Even though that might not be their only concern, once you study them for more than a second, and either succeed or fail in figuring out the "subject", you will probably appreciate them because you see the same lines that I saw when I was there. If you do, then I have successfully communicated my "wow" and I am happy, especially if you take one home.

Did I go out on a mission to find lines? No. People usually say that I have a "great eye", which I happily concede even though I think they probably do too if they would only free their mind from the subject paradigm. As an architect I was trained to "see" like an artist, and then battered down by program, budgets, and clients until I often couldn't see my art at all beyond getting paid to do something I could love, if they only gave me the chance. That is why being an unalloyed artist, while even less helpful to my bank account, is usually much cleaner - the viewer either is moved , or they aren't. 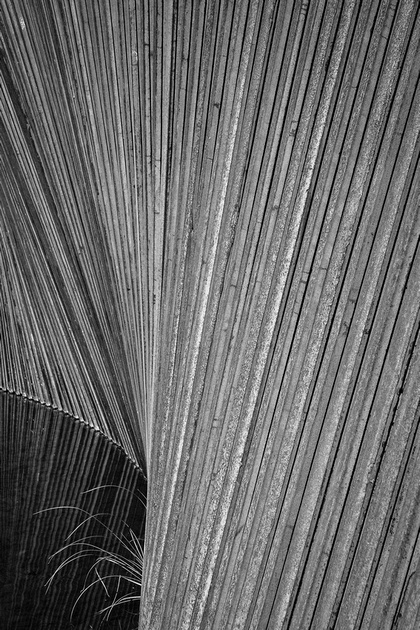 Just because an image is about lines, doesn't mean it can't be about anything else. This black and white version is even more about lines, and maybe texture, because I've eliminated the color - even the grass is now just calligraphy, and the pond is simply a mirror. The trouble for me is that the image was also mainly about color - that orange - even though you don't have to know that you are looking at a railroad rail sculpture. The orange is all important to me (I happen to like orange) because for once I was in the right place at the right time, the late afternoon, when the western sun bakes the rails in golden light to heighten the sculpture's intrinsic orangeness. 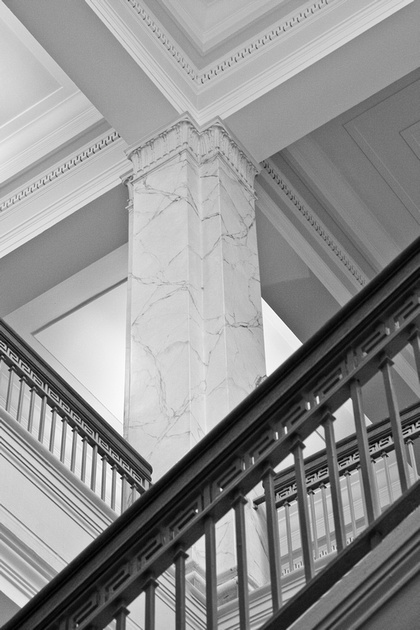 I'll illustrate my search for line with several other images which vary in their abstract quality to show that seeing lines doesn't have to reduce a photo to a graphic exercise, though there is nothing wrong with that. This view up the stairs is just below the skylight dome in our Main Library, and the intrepid photographer has actually succeeded in getting three diagonal lines to "line up" with the corners, more or less. In color the image becomes more about the warm wood of the railing and the fake marble of the column. 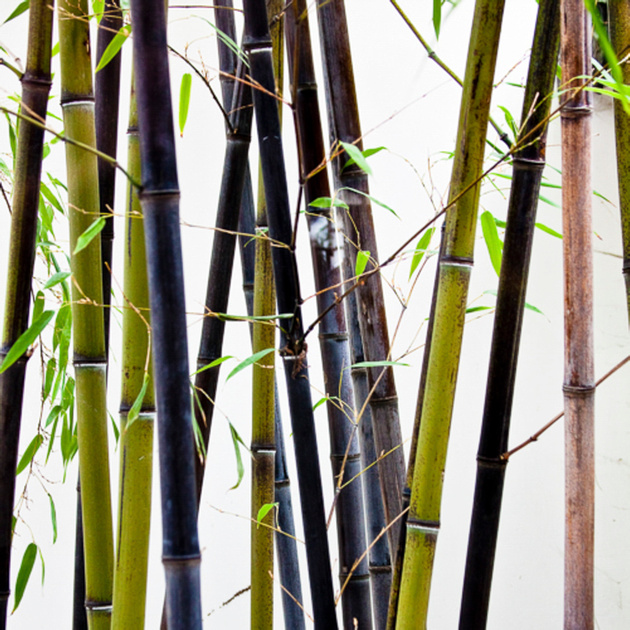 This image from our Chinese Garden is not really about bamboo, although I do like the five different shades of the stalks. The isolation of the stalks against the stark white stucco wall was what I was after, which shows that the artist who designed the garden also effectively communicated his or her design strategies to me - sometimes you are seeing what someone wanted you to see. Actually this image mostly reminds me of the old-school five scratch lines I use to count up things before I bow to the computer gods. 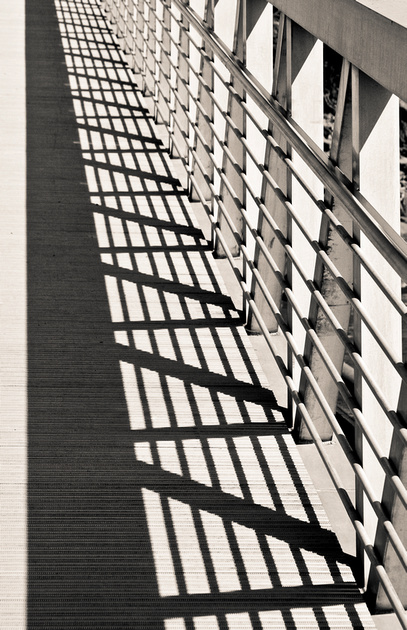 Yes, it is about shadows, and it's not about the bridge, but this image, in my mind, is mostly about the lines. The hint is the way the photographer has not shown the vanishing point further down the bridge, and that I at least tried, more or less, to line up the main line with the left edge of the frame. 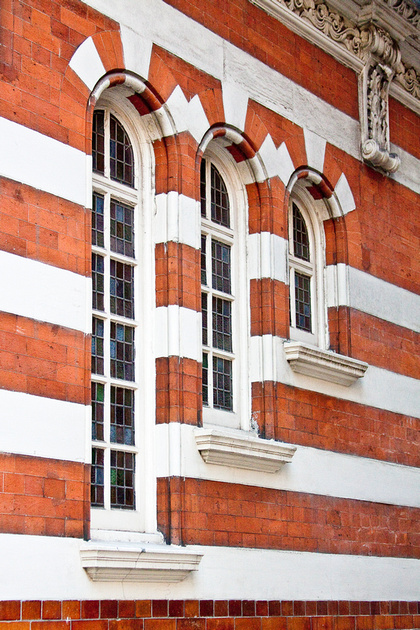 My title of this image hints at my motivation, in addition to providing a bad musical pun. This detail of three windows lining a stairway is really about the polychrome ( many colors) masonry which the architects wrapped this building in seeming defiance of its neighborhood in London, Whitehall. The architecture, and my image, is all about the lines. The photo loses something in black and white because what it gains in masonry texture it loses in color pop - I do like orange more than the average fellow. 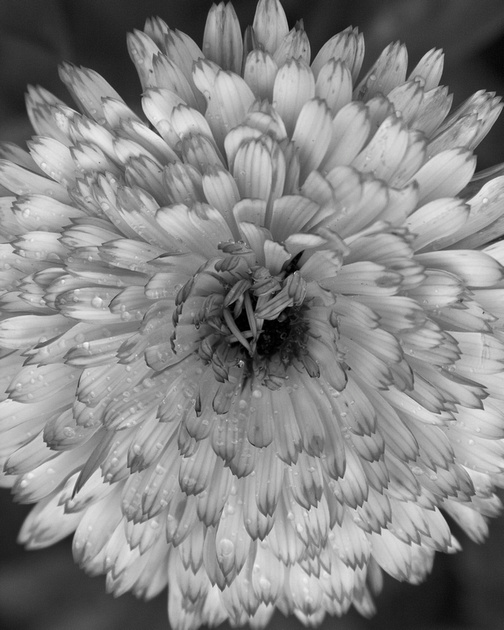 This closeup of a dahlia is all about the wonderful lines that only nature seems to supply us if we learn to look for them. It also helps to use black and white to remove the color, which was so overwhelming that it was actually kind of painful to look at. It would be even more abstract if I cropped out the borders, but I like the contrast too much. It is a slippery slope when lines turn into patterns, but so be it. 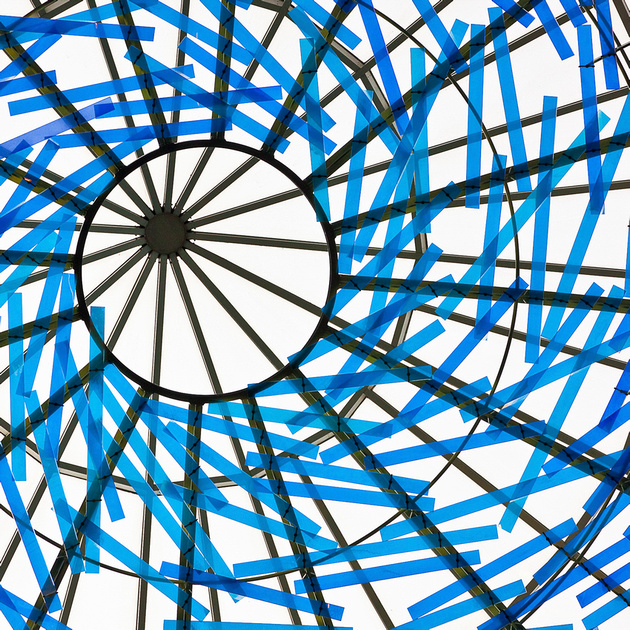 I will end this essay with this last image, one of my personal favorites which I have shown before. Its title was provided by my muse, my wife, who declared her skepticism by labeling it "Doodle #1". I kept that title in an act of artistic defiance, and much to my surprise it has become one of my more popular images. It is all about lines, a little about color, and represents my appreciation of the art of the skylight at Portland's Center for the Performing Arts. In pursuit of my lines I deliberately "blew out" the Portland grey sky by overexposing more than two stops to get that white background.

I would encourage all of you to open your eyes to see things beyond, or in addition, to the "subject" of a photograph. I believe it will free up your artistic juices, especially if you don't think you "deserve" to be called an artist. Like I always say, you haven't begun to be a photographer until the person next to you, usually your spouse, asks you "what the hell you are photographing?" It then becomes your problem as an artist to communicate your enthusiasm, which sometimes is hard. But if we wanted instant and guaranteed emotional responses, we would all restrict our photography to cats, dogs and babies, and that's what Instagram is for.