CRACK IN THE GROUND 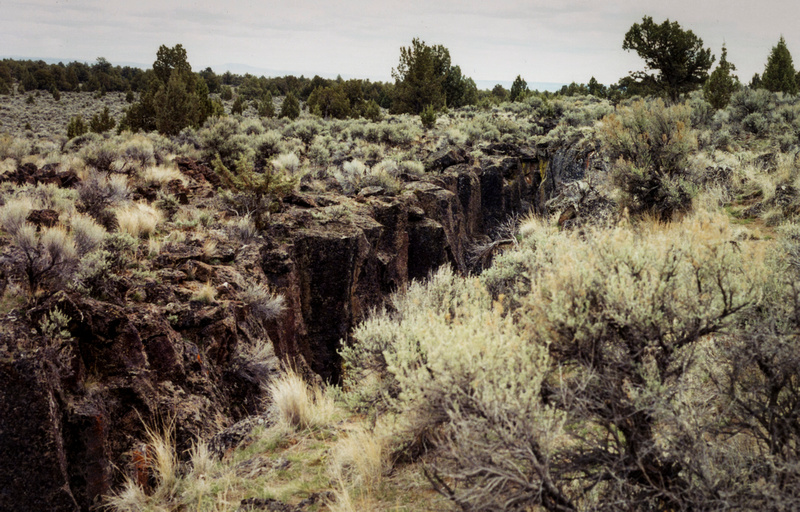 CRACK IN THE GROUND #1 : FINAL VERSION

This week I would like to discuss one trip I made with Benjamin to Central Oregon about seventeen years ago. Our usual "plan" was to drive for about four days into the unknown, in no certain direction, the only proviso being that we wouldn't sleep in the car, (avoided only barely sometimes), and that we couldn't drive farther away than it would take us to get back by the end of Easter Vacation. In retrospect we always had a great time, even though my frequent forays beyond normal routes would often drive my son nuts. He never got used to the idea that my object seemed to be to take the road much less traveled, with only a vague idea that there would be something interesting at the end or on the way. Now I can't believe that I had the stamina to drive through an empty state alone, since my son had absolutely no interest in driving way after he could have legally taken the wheel. Of course most of the places we went were so empty that in an emergency he could have taken the wheel even as a ten-year old. In any case, Benjamin has finally gotten a license as a 33 year-old college professor, and he drove the whole way on our last road trip through rural North Carolina.

Even though I failed my duty as a parent in training him for transportation beyond taking the bus, I will say that Benjamin might be one of the few Millenials who knows how to read a map. As navigator, he was in charge of at least setting us off in the right direction, albeit with fatherly checking that declined as he got older. Not that much has changed on this map, but I just realized that the copy I still have features Governor Kulongoski. Benjamin mastered the state road map pretty quickly, and was especially delighted when he got to turn it over to check for the detailed "city" maps, since they meant that we had returned to some semblance of civilization and that lunch might be in his future. But he was very suspicious when it became time to turn to the 88-page oversize map book of topographic maps of the entire state that I had procured in Powell's. This fount of all geographic knowledge, useful or not, only promised that we were about to enter places that most maps would fill with warnings or blank space - "here be monsters." 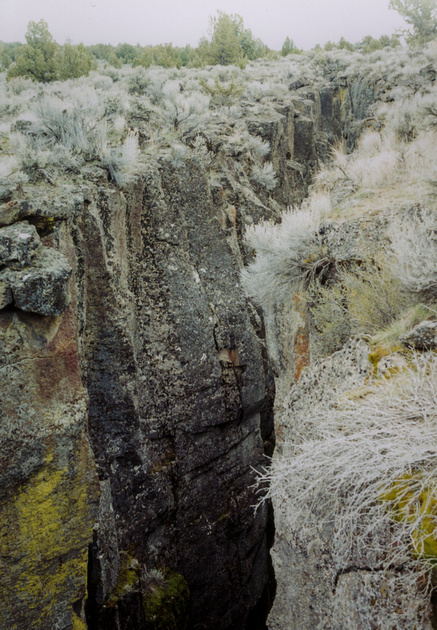 CRACK IN THE GROUND #2 : FINAL VERSION

These maps were so detailed that it sometimes seemed that if it wasn't on the map, it didn't exist. On the other hand, it led to even further exploration once we had reached the middle of nowhere, since there always seemed to be a more obscure road to take us further afield. Each page of the book was only about 10 x 25 miles in size, so every feature of the landscape was highlighted for our edification. Almost every hill, stream, or lake was acknowledged by name, which lent a degree of certainty to routes that otherwise didn't inspire confidence. Benjamin quickly began to realize that a good half of the named towns were still aspirational, and it spawned a parlor game when we had already passed the town we were looking for without realizing it.

Overall routes were still planned with the state road map, since the map book was too detailed to understand where you were actually going to beyond the next half hour, no matter how slow the state of the road lowered the speed limit. But the book also provided two further planning devices in its "gazetter" section. 30 Scenic Drives outlined routes of 35-160 miles that promised adventure, landscapes, and directions so detailed that they could only be followed on the book's maps. But I really fell in love with the list of "Unique Natural Features", most of which I had never even heard of, and were found on no other maps than those contained in the book. This "bucket list" provided our intrepid explorers with some reasonable excuse to drive way-out-of-the-way. 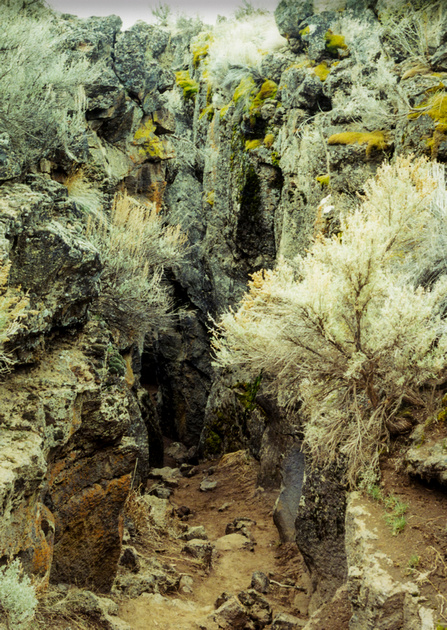 CRACK IN THE GROUND #3 : FINAL VERSION

One of these features that inspired a trip was delightfully and laconically named Crack in the Ground, the atlas' homage to the classic "Snakes on a Plane." The atlas quietly promised a "fracture" 2 miles long, 40 feet deep, and ten feet across, and so off we went. I have only met one other person since who has ever been to the place, or even heard of it. I would recommend it as a way station on a trip even farther afield, since it is not really very near anything else of interest or easily reached by the most popular routes into the Outback. I guess you could combine it with a trip to Paulina Lake, or as a stop on an adventure farther into Eastern Oregon. While it is actually close to Bend in theory, you are required to take some sketchy dirt roads off Route 20, and I might suggest a longer, but mostly paved trip on Route 31 out of La Pine. In any case you will end up in Christmas Valley, another "town" that might be now more than the mere gas station it was at the beginning of this century, or maybe not. At least the young attendant pointed out the dirt road that led out of town to our destination, which had not even been cited in the map book!

Eight more miles of featureless high desert sagebrush later, we arrived at a small wooden sign  that cited a "parking area" no different than anything else surrounding it. Benjamin was reassured by the two other cars in attendance, though we never saw any other people. Fortunately there was a smaller arrow sign that pointed the way, since the "park" provided no information on what was about to happen. The trail was at least clear, because it soon became apparent that the crack in the ground might have been discovered simply by someone unlucky enough to fall into it. 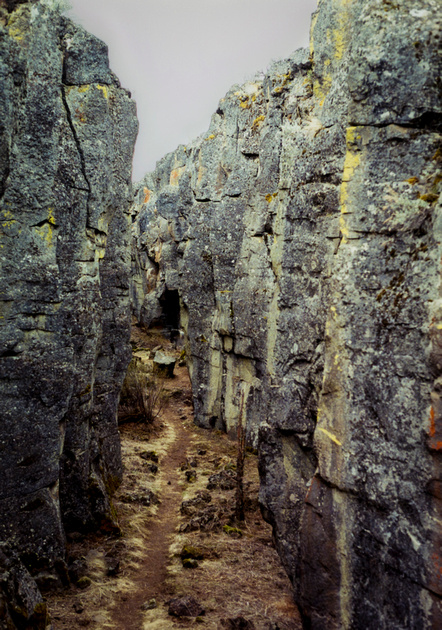 CRACK IN THE GROUND #4 : FINAL VERSION

As shown in the first two images above, the people who named this curiosity weren't kidding. You are walking along, minding your own business, across the flat, featureless, sagebrush High Desert that extends for miles in every direction, only occasionally relieved by a lava flow, a tree, or a dried-up lake. And then you come upon what can only be called a crack in the ground. We descended until we were about 40 feet below the surface, and soon were encountering snow in our sneakers, since the shadows had protected the snow long after it had melted up on the top. While the chasm varied in size, it never narrowed so much as to encourage doubling back, nor widened enough to achieve canyon status. This was a crack, and I stated to wonder if we would encounter an animal skeleton of a sheep or cow who had met an untimely end up above. The crack extended for nearly two miles before it rose and petered out on the surface after a couple of miles I remember us walking back up above, carefully keeping our distance. The images from above were taken on the trip back, for the trail in doesn't provide any such preview of the crack. 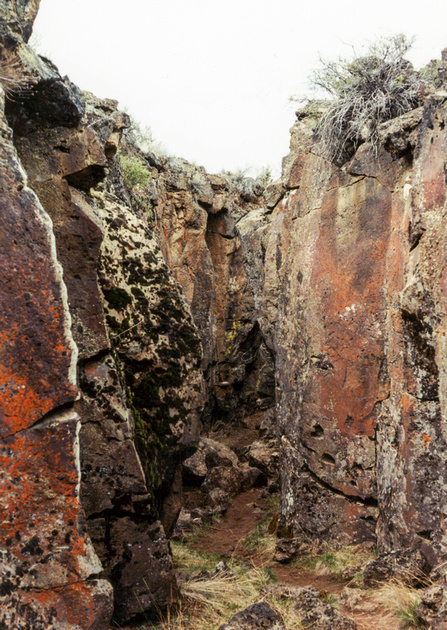 CRACK IN THE GROUND #4 : FINAL VERSION

As advertised in the gazetteer, the crack's walls featured "unusual wall outcroppings", with some nice areas of different mineral flows in varied colors enlivening the views. I know some of these images seem to be dead ends, but my memory tells me they were just bends in the crack. I remember it as just your usual cloudy day, but I don't know how much sun you get in this crack when it's sunny any way; for all I know we might have avoided excessive contrast that day. Benjamin's respect for the map book's wild understatement encouraged further adventures afterwards, for he now knew that something lay behind the promise of "unusual natural feature." 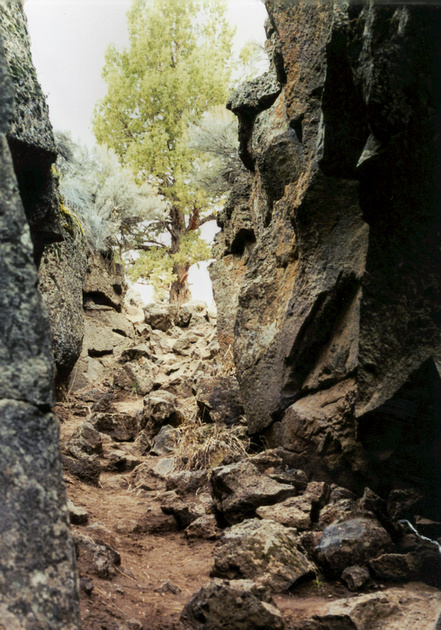 CRACK IN THE GROUND #5 : FINAL VERSION

We walked out of the crack to find the lone tree in the landscape, and then trudged back to the car, staying well away from the crack. I didn't trust the stability of the edge one little bit. For the life of me I do not remember where we ended up staying or eating afterwards, but that might have been the time we were so pathetic that the restaurant we ate in allowed us to sleep in a day room off the kitchen. All in all, the map book had served us well once again. And while I'm not sure that these images do the crack justice, since I have never seen another image of this place, what do I know? I just recommend that the next time you find something on a map, even if it's on your phone, you feel okay in striking off in a new direction. You just might find something as weird as Crack in the Ground.