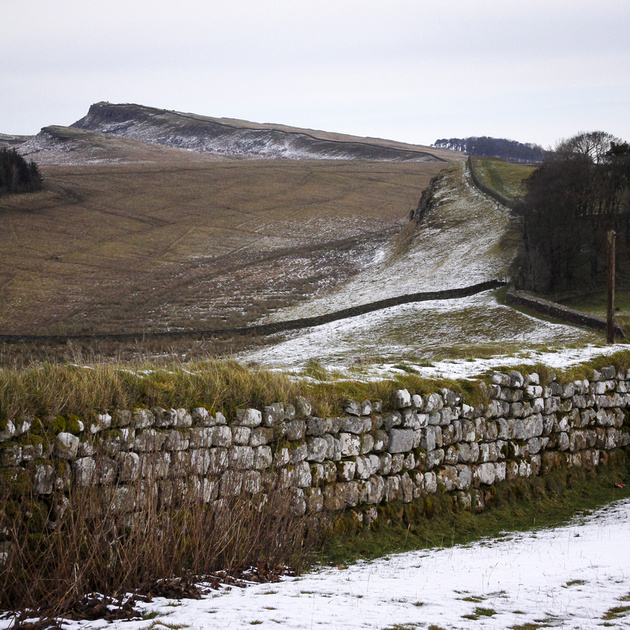 This week I would like to show how you can usually find a few more good images within an exemplary image. This process of cropping to discover several new versions of the original photo is based on two basic theories of photographic composition. The first is that the framing of an image - what you include and what you leave out of the frame - is critical to your interpretation of the scene in front of you. This continues after you make an initial crop, because that frame is not the last word either. The use of different aspect ratios - the ratio between the horizontal and vertical dimensions of an image - can also completely change the way a viewer can interpret a scene. The second theory of composition that is one of my particular touchstones is to "get closer." My way of seeing is based on the idea that an image's impact will increase the closer you are to the real subject of the image. The admonition to "get closer" rules your cropping strategy until you have obviously gotten too close and lost all context for your subject. These two different cropping strategies will reappear in the variants I will show you of half a dozen or so images, most over a decade old. The fact that I am "used to" one way of cropping an image doesn't mean that another way will always be inferior. These different interpretations have intrinsic value in that they can break you out of the box, if you forgive the pun. The alternatives do not have to blow your mind either - your original decisions might still be the best.

The confession I have to make before we proceed is that in looking over my archives I have rediscovered two truths about my imagery. While I always say that a good landscape contains two or three other good images, I have realized that my particular way of seeing - a tight frame around a graphic image - actually makes that truism not as true for yours truly. The other aspect of my imagery that makes it tougher to find additional images is that contrary to most photographers, I usually frame my images vertically; this makes it harder to find interior images because the images do not contain as much breathing space as the more typical horizontal landscape. Yet I did still discover images within my images. Let's explore. 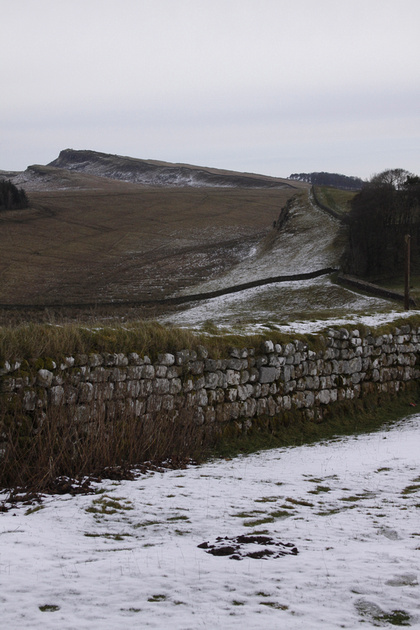 This first image was captured on a very cold day on the border between England and Scotland. Hadrian's wall stretched across the north of  Roman Britain, from the Irish Sea to the North Sea to preserve civilization from the depredations of the primitive Scots to the North, who had never been conquered by the Romans. The analogies to the Game of Thrones are more than obvious. The wall still stands today, complete with fortifications every few miles or so; it used to be a lot taller only because the dust of two thousand years has raised the ground level around it. My original square crop of the original image obviously helped for several reasons, as did exposure tweaks. The square crop eliminates the unkempt snow on my side of the wall as a good portion of unexciting overcast sky. 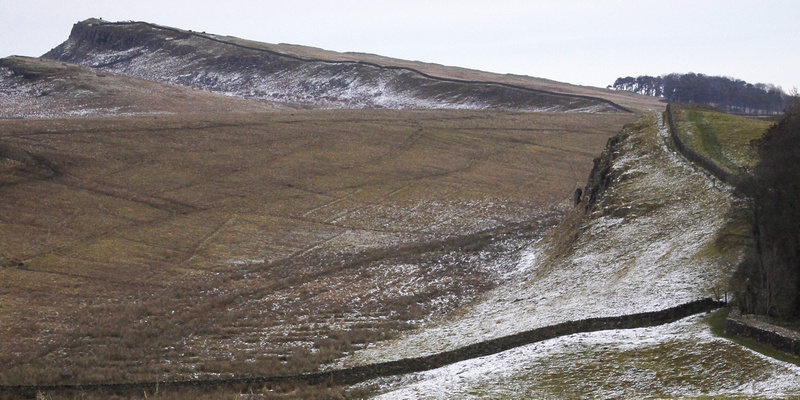 HADRIAN'S WALL, SNAKING THROUGH THE LANDSCAPE TO THE HILLS BEYOND 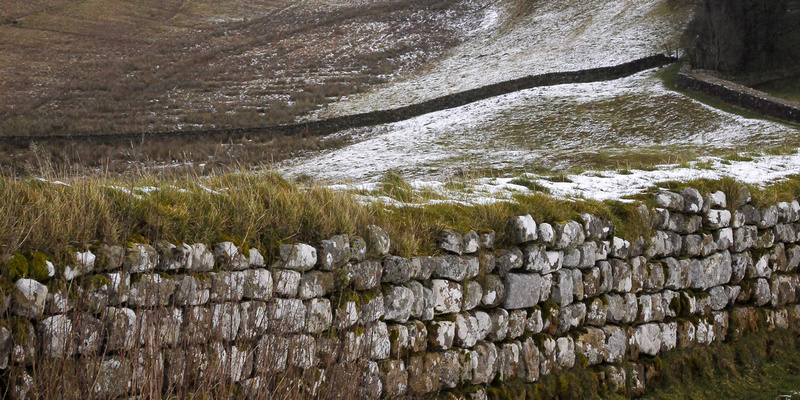 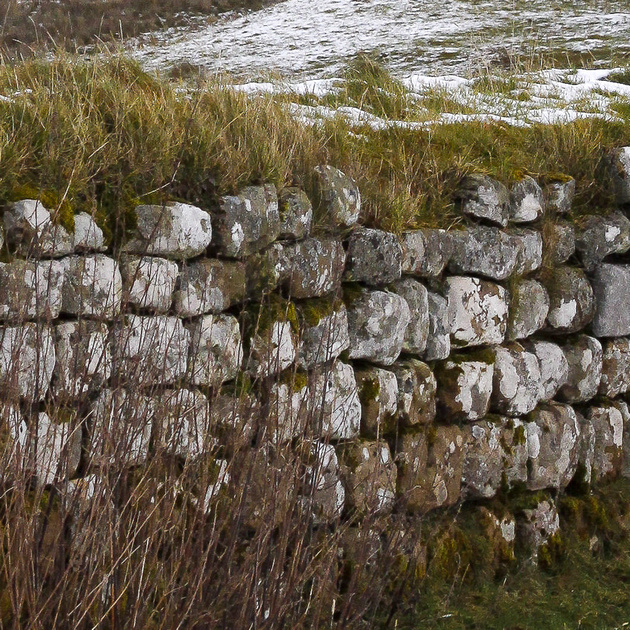 HADRIAN'S WALL, UP CLOSE AND PERSONAL

Here are three new interpretations. The first ignores the nearest portion of the wall in favor of the snaking portions in the distance. The second leaves out the mountains and that boring sky completely. Both use a panoramic 1:2 aspect ratio to emphasize the wide extent of the wall. The third square crop concentrates on the texture of the wall itself and the incredible skill of its builders on the edge of known civilization. Again, different doesn't necessarily mean better or worse, just different. In case you aren't feeling cold enough, see what the black and white version does to your bloodstream. 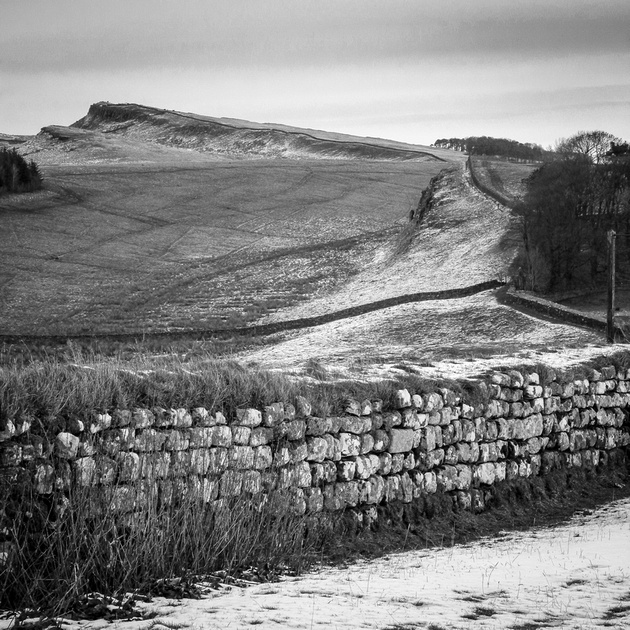 We now move South to London, to Horse Guards Parade, which might be familiar from the Queens funeral. This parade ground is literally where the Horse Guards strut their stuff behind Whitehall in the center of the capital. 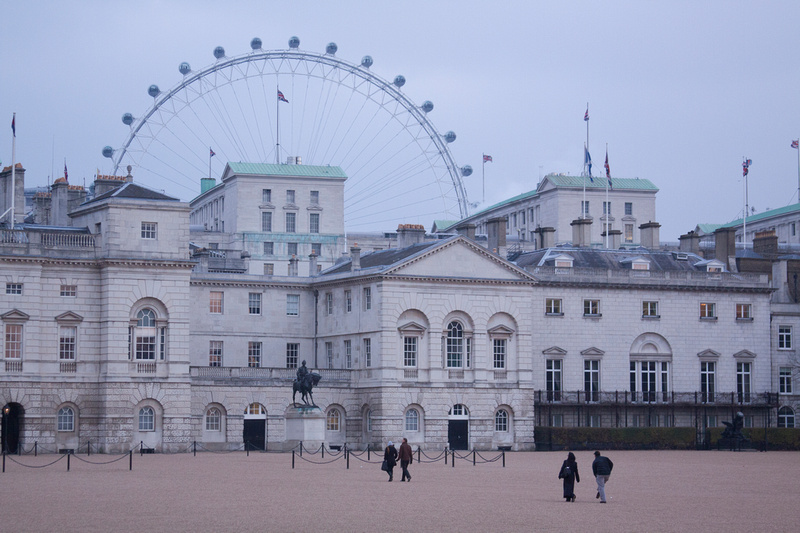 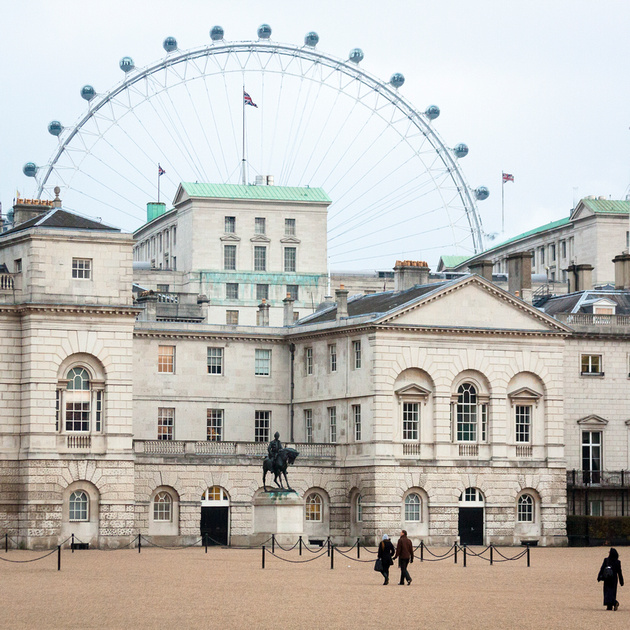 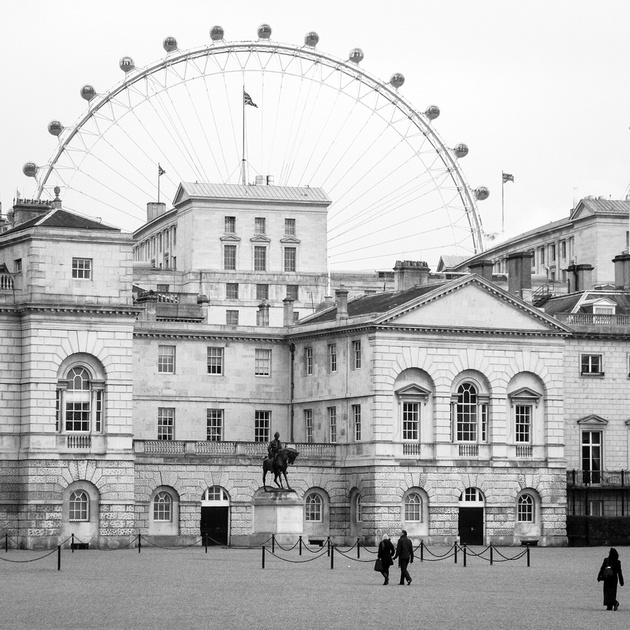 The square crop of the original snapshot is a vast improvement in my humble opinion, as the extra room on the right doesn't add anything to the composition; leaving it out also puts more emphasis on the surreal appearance of the London Eye in the distance. I can't decide whether I like the color or the black and white version better. 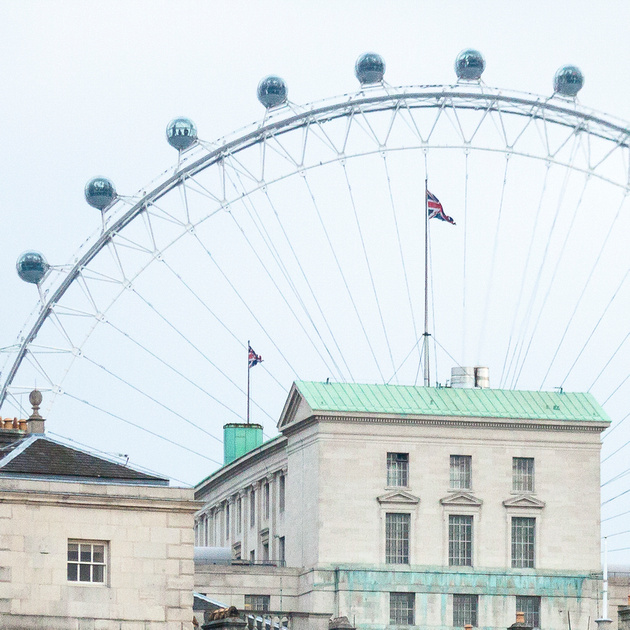 These two new crops concentrate on parts of the scene to emphasize either the more traditional scene or the Ferris Wheel in the distance. Again, the overall crop might still be the best. 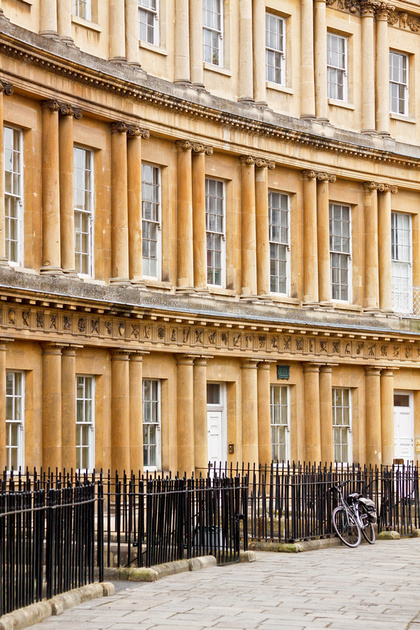 We now move onto Bath, home of some of the first multifamily housing in Great Britain. This is a sliver of the Royal Circus, a complete circle around a park, covered in the "Bath Stone" typical of the city. 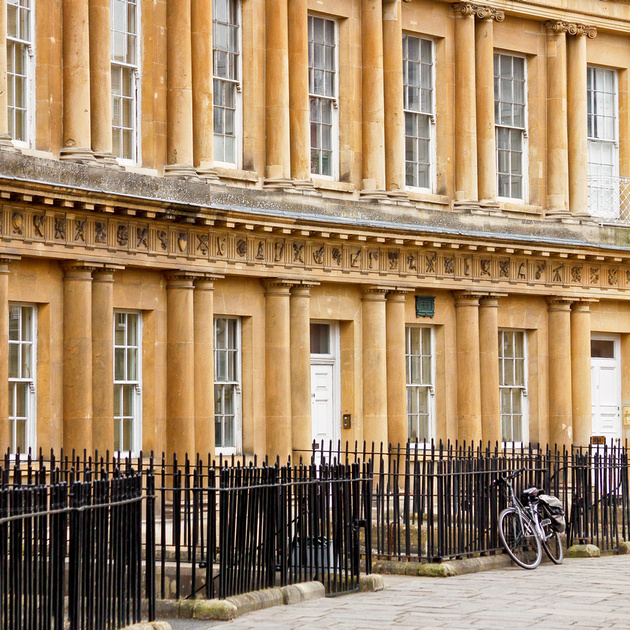 The square crop brings you closer to the scene by eliminating the top floor and a little of the sidewalk. But what if we get even closer? 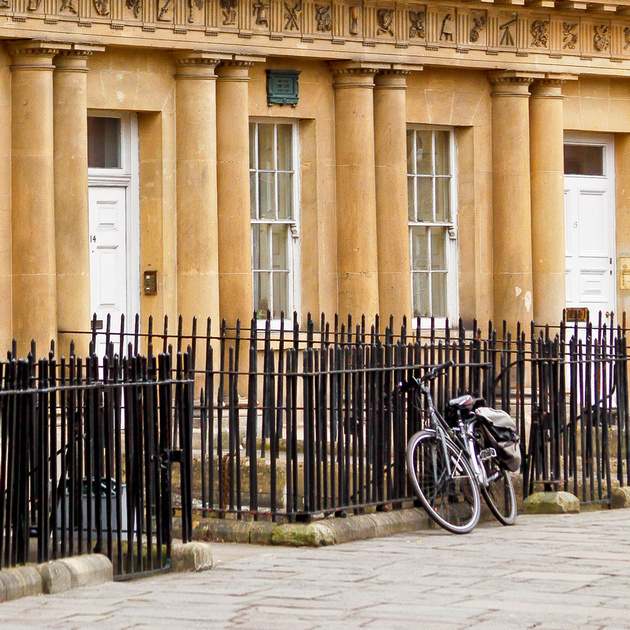 ONE BICYCLE IN BATH

We can now give our attention to that modern invention, the bicycle, which lagged a clear half-century after these houses were built in 1824. The Royal Circus has been subtly humanized. 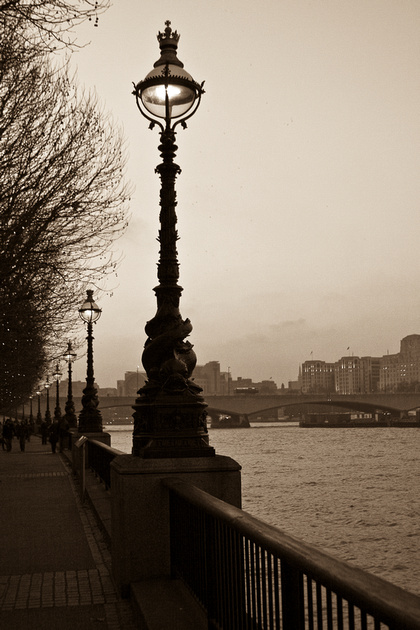 The promenade on the South Bank of the Thames is a continuous walkway, complete with Victorian sculpted lamp posts every twenty feet or so. This was the venue for the recent "Que" to pay respects to the Queen, a line which extended ten miles over three days and nights. These tow additional crops show how subtle differences in aspect ratios can affect an image. While these are subtle, it is interesting how different people can really respond to a change in aspect ratio. The original is a standard 3:2 vertical; the narrower image is a vertical 2:1 panorama, while the last image is a very traditional 5:4 vertical to fit your 8 x 10 frame from the drugstore. 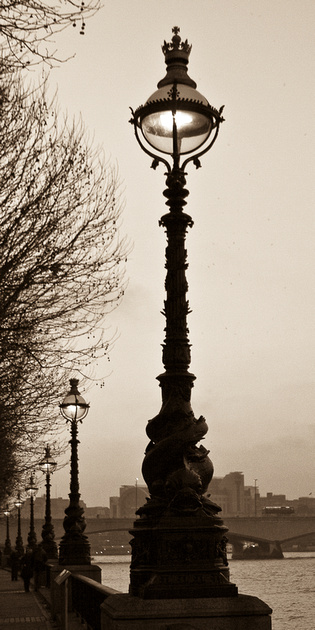 This is a ridiculously wide crop, a 1:3 horizontal, of a wild scene on the edge of Dartmoor in Southwest England. Beyond that hill is thirty miles of wilderness, so barren that when I walked on the edge I later realized that I had walked through an RAF bombing range. These two crops were easy, since there are obviously multiple images within this one. 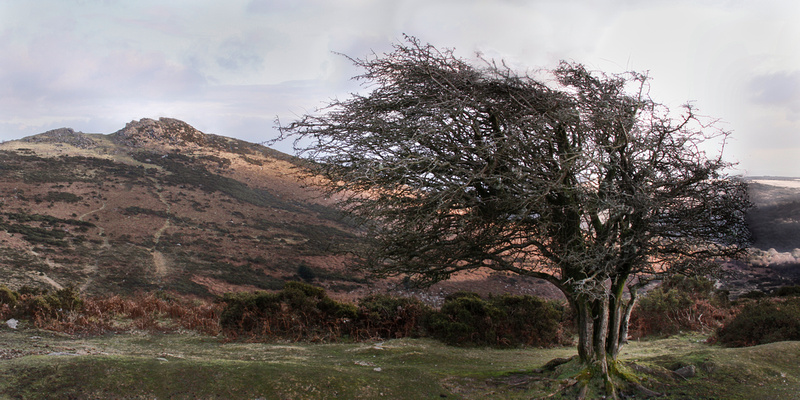 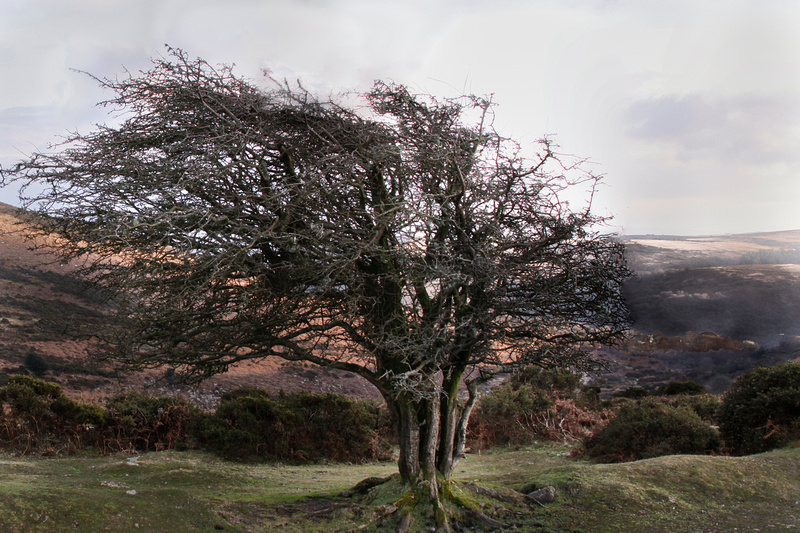 The first image is an under control 2:1 panorama, with the hill nicely balancing out the tree. And if you think the tree deserves its own image, the the standard 3:2 crop now looks like an absolute close-up. I lightened the overall exposure one stop and then darkened everything around the tree to let the tree stand out a little more than the original exposure, which I kept dark to hide the multiple artifacts from this panoramic stitching experiment, which used 5 different images! 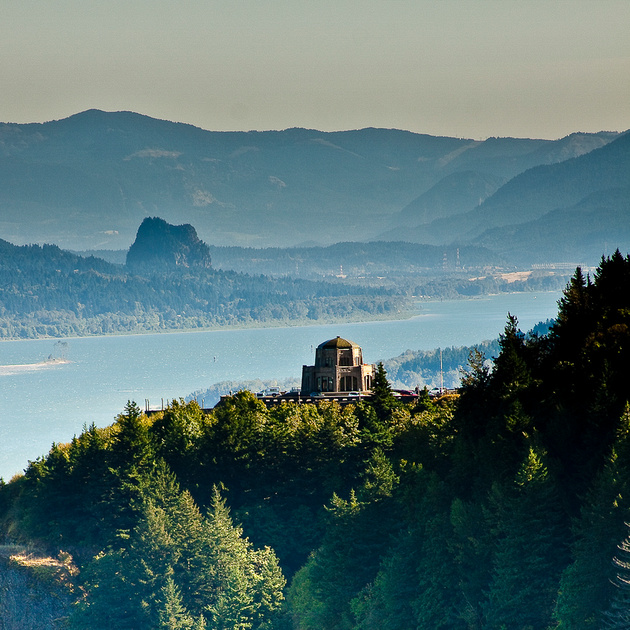 And finally we get closer to home, with this view of what I call "God's Restroom", Vista House at Crown Point in the Columbia Gorge. As a retired architect, I naturally emphasized the man-made intervention in this incredible scene. What a site! If you don't think civilization can improve on Nature, cover up the building with your finger and then form an opinion. Since I made this image, I have always been upset by the grim sky above, the result of raging forest fires deeper within the Gorge. If any image cried out for sky replacement, it is this one, but my ethics and lack of post-processing skill have always prevented me from further investigation of this image - until now! Could a different crop make a difference? 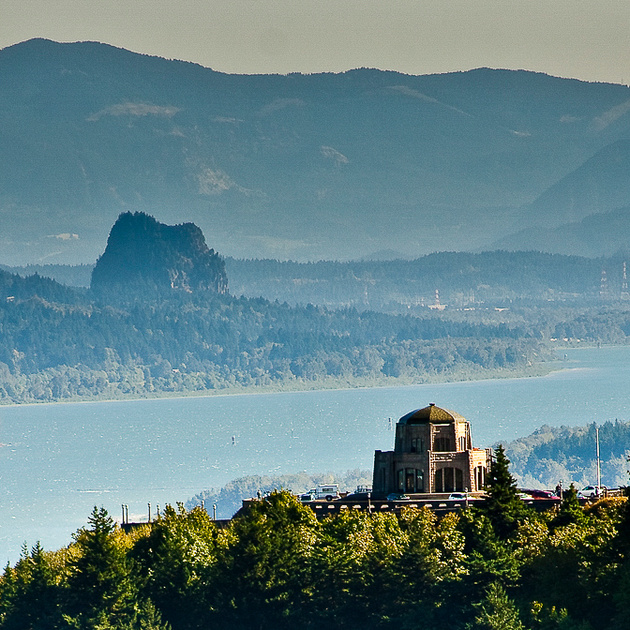 GET CLOSER! : SQUARE CROP WITH GUSTO

Get closer, while keeping to the square. The sky is diminished, and the building is even more important in  the slightly less grand landscape. 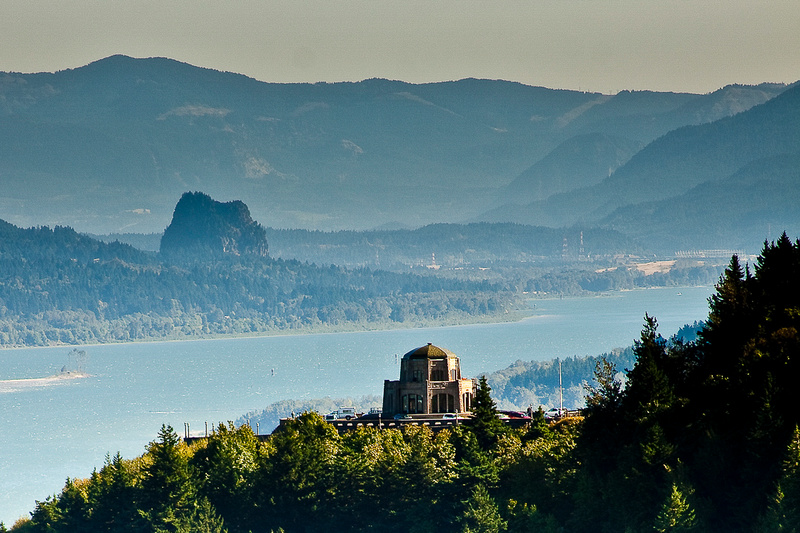 Does a horizontal aspect ratio help widen the scene while ignoring the sky? 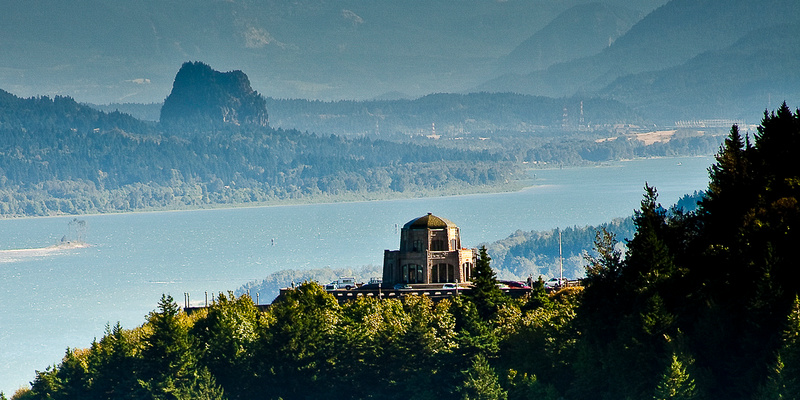 Get closer! This time by going even wider, since the 1:2 panorama cuts out the sky completely by leaving out the tops of the Gorge cliffs beyond. 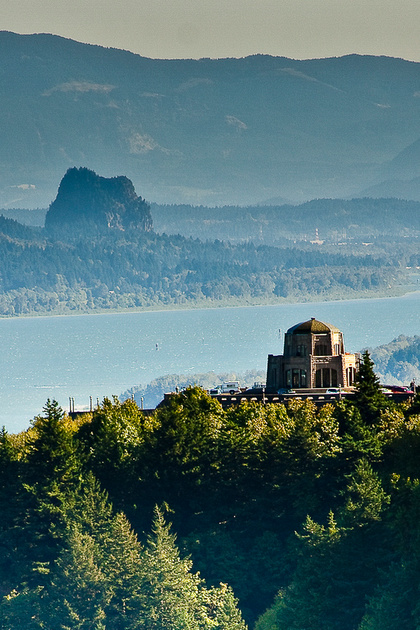 And finally, maybe perversely, will a vertical aspect ratio heighten the drama by drawing Beacon Rock visually closer to the Crown Point? If you've hiked in the Gorge, you know that the real killer is vertical gain, so why not narrow the scene to emphasize that grandeur? That brown sky is again reduced to just a sliver at the top of a vertical panorama.

I hope you have enjoyed this exploration of the art of the crop. It proves once again that there is more than one way to skin a cat, even if you have been looking at an image one way for more than a decade.