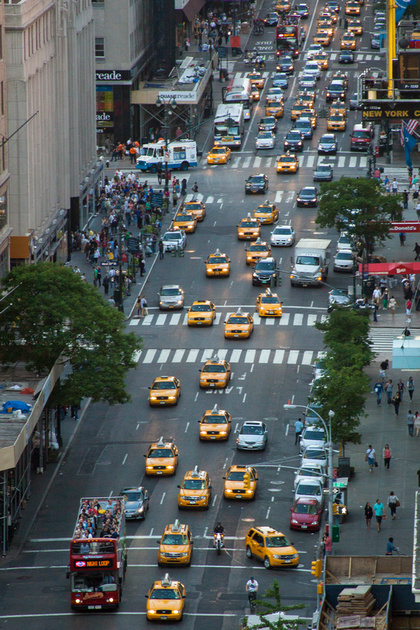 I've been thinking about New York even more than usual this week, mostly because my beloved team, the New York Metropolitans, have somehow succeeded in disappointing me once again. I had successfully resisted their charms all season until the final two weekend series against the Braves and the Padres reduced the season to ashes. The Yankees still remain, but of course they are not only the ancient enemy but also seem to to be the worst 99-win team in recent memory. Optimism does not reign.

I've lived in Portland now for thirty years, but I will always be a New Yorker. Fran is frequently  confused by my latest rant until she realizes that the mayor that I'm complaining about lives three thousand miles away. As an urban landscape photographer I do envy the photographic opportunities available in "The City that Never Sleeps" as opposed to our own "City that Works." Along with London and Paris, New York serves as the scene of most of the world's history of photography in an urban setting. I do try my best with Portland, but it remains obvious to me that their is more potential for imagery on one block of New York than in the entire Rose City.

This week, in another attempt to find some of "The Missing", those important images that I have somehow lost once again, I happened upon a half a dozen images from New York that I had neglected over the years. I enjoyed processing them, and it proved to me that I can capture some of the beauty and absurdity of the place that I was born 66 years ago, but visit very infrequently. These images are from the last ten years, but somehow seem to be timeless glimpses of the New York of my imagination.

The first image above is a view looking down on Midtown. My telephoto lens provides some compression, so that four blocks can seem even busier than they are. Normally I would convert to black and white for what I consider a more realistic "naked city" monochromatic vision, but of course I would then lose those yellow cabs which provide some sense of visual order in the jumble of New York traffic. 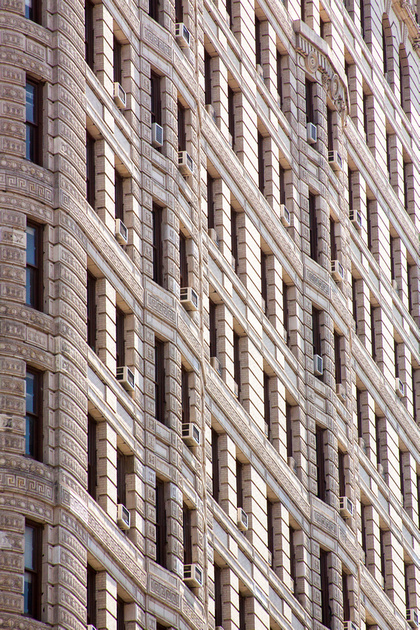 Here is another classic view of New York. The Flatiron building has been one of the world's most famous photographic subjects since the beginning of the 20th Century. I've read one photo book which pretty successfully recounted the entire history of photography through images of just this one skyscraper. I'm not really adding much new here, but in restricting my view to just a portion of the facade I think that I have stressed the building's ability to be part of the fabric of the city even though it's height and shape and location was astounding to pedestrians when it was first built. By leaving out the famous curved end of the building, as well as both the sky and the ground, I can concentrate on what must be the most subtle bay windows ever drawn by an architect. I had never even noticed that the stone on these bays was a little darker than the flat portions of the facade. This facade serves as the proof, in my opinion, of the notion that older masonry skyscrapers achieve more "readability" than newer glass facades, in that we can readily imagine ourselves looking out from those clearly human-sized openings. In leaving out the base of the building, the image is rendered more timeless, since the Flatiron is always the same, but the pedestrians, the storefronts, and the "transportation conveyances" change over the decades. The only clue that this is a modern photo are those window air conditioners that look like they could be in my childhood bedroom. I converted the image to black and white, but I find this color image, so tan as to be monochromatic, to be more convincing. 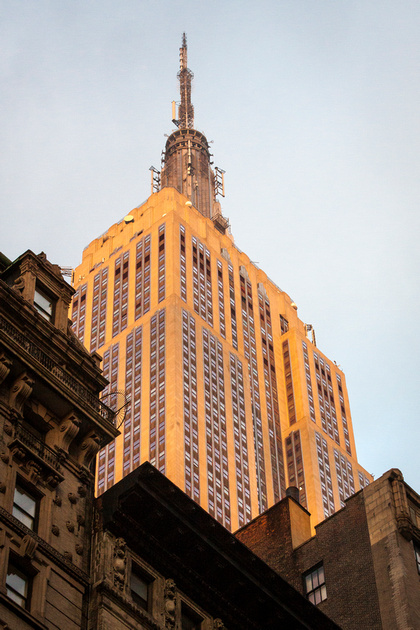 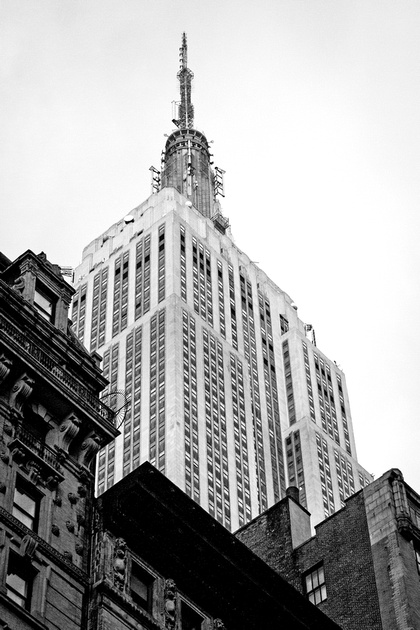 Which is not to say that I can be convinced in the other direction. Of these two versions of the Empire State Building, I find the black and white version so much more "New York" than the color version that I think the debate in this case is over. In fact, even though I know that the colors in the first image are "true", to my eyes they appear completely fake. Both images do illustrate what I like best about this tower, that it appears to fit the fabric of the city despite its overwhelming size. From a few blocks away it complements the older buildings that surround it; a lot of it's charm on the street is that even when you walk right by it, you cannot tell that something is going on until you look straight up. 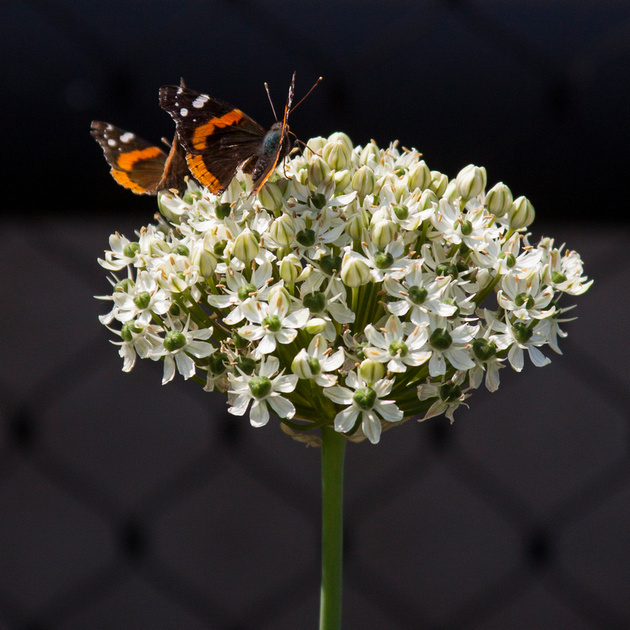 Nature sometimes asserts itself. This image is from the High Line, the genius of an urban park created out of a ruined elevated freight line on the West Side. Here I've been charmed by the appearance of not one, but two butterflies, on a flower blossom two stories above the street. Drastic underexposure of the background has made the chain-link fence a distant memory. 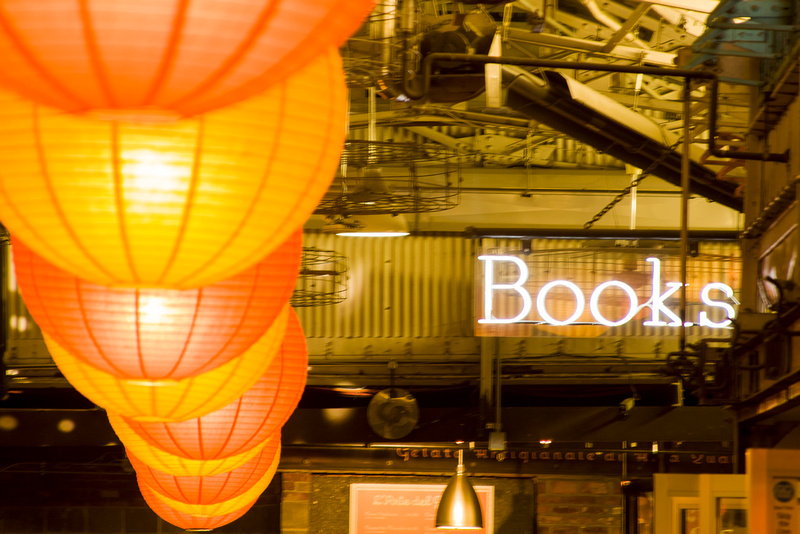 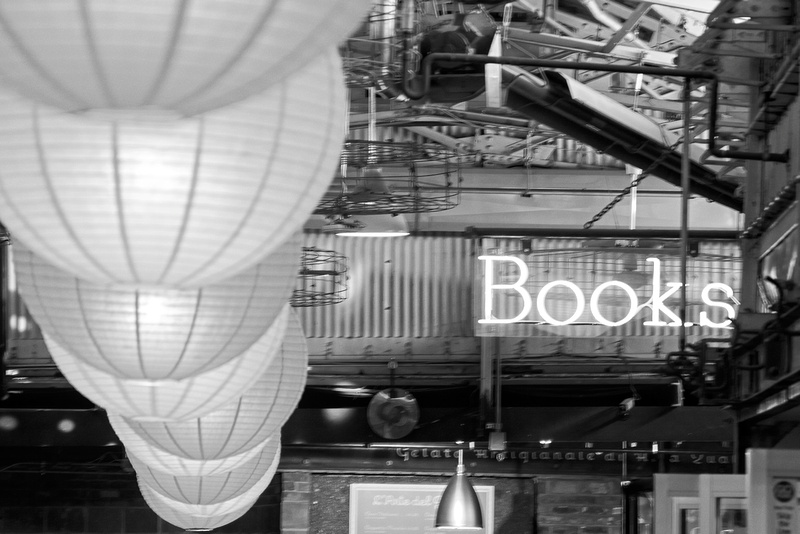 Sometimes the choice of color or monochrome is just a matter of taste. This interior view of a small portion of the Chelsea Market works in both, but I really love yellow and orange, so that's where I fall on this argument. I love the way that the various light sources - the incandesent paper lanterns, the neon store sign, and the natural light streaming in from stage right - combine to create a harmonious atmosphere. As usual, the black and white reveals more detail, while those yellow and orange lanterns brings the image to life. What is interesting to me is that to my eyes the Books sign shows even more contrast in the black and white version, set against gray, than it does in color set against what should be a more contrasting tan. In both versions I feel that the image is very balanced, with the visual weight of the lanterns on the left holding serve with the power of the bright letters on the right. 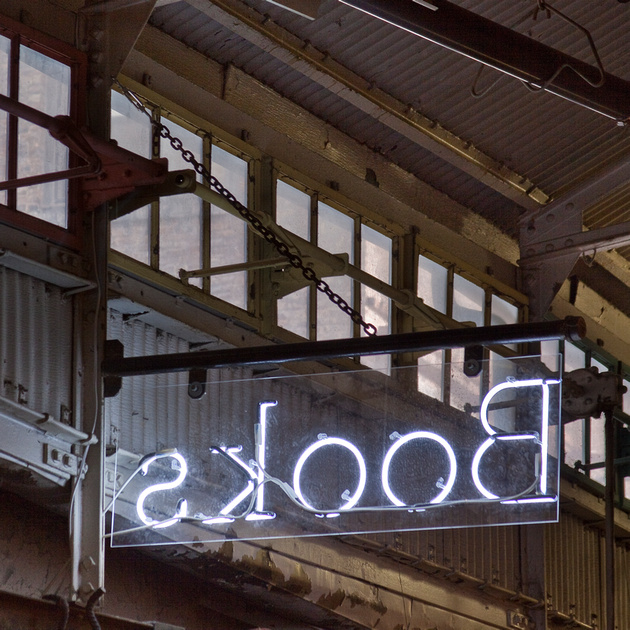 Another reason that I was charmed by this rediscovered image is that it provided a complete contrast with one of my most venerable images. I have sold hundreds of copies of this shot, taken ten feet away, and ten seconds after this forgotten image. "Books" has always provided me with all the proof I needed  of the value of print in the photographic image. I never could decide the value of a neon sign on a clear background that could be seen from both the front and the back, but there was no denying the power of letters to engage viewers, even if they were backwards. It was nice to rediscover the cousin of "Books", now known as "Books #2." 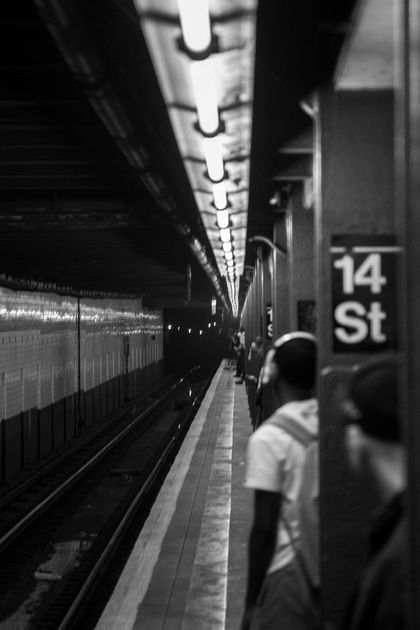 This final image only works in monochrome, as we have entered the belly of the beast. I am forever grateful that I had the chance to grow up in New York, but I often find it impossible to understand how anyone who did not grow up there can overcome the urban angst that becomes second nature to a native. I know I am really back in the city when I descend below to take in the awesome reality of the subway, where every day more people than live in the entire State of Oregon somehow get to work, to the ballgame, or just back home, without questioning their very existence. As in a lot of the magic of the city, it is truly a miracle that it works at all.

If you question your sanity in relation to the average New Yorker, I leave you with this final thought, gleaned yesterday from the "Newspaper of Record." In an effort to do something about the filth of the city's streets, the powers to be have decided that they will not allow garbage to be placed on the street until 8:00 P.M., thus shortening the city's rat buffet by four hours. This proposed "solution", was taken by the only major city in the United States which in fact allows garbage to be placed on the street without that modern invention, the garbage can. This is yet another example of what constitutes the truly "Unique New York" quality of life in the city of my birth.