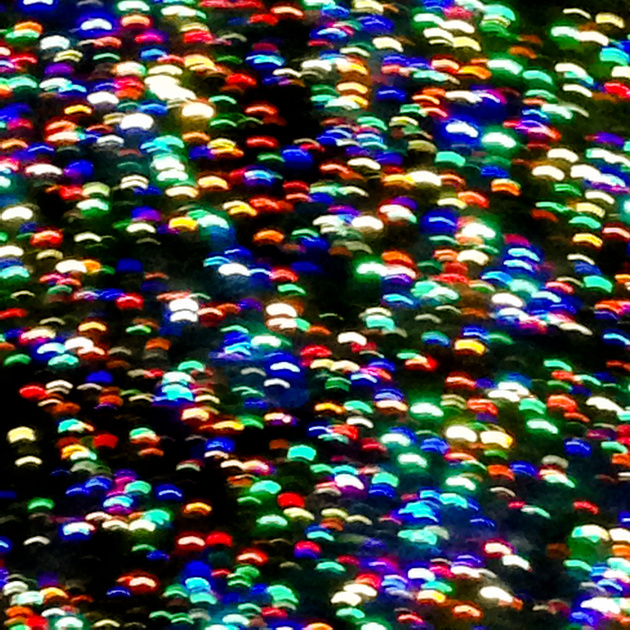 This week I would like to show off another half a dozen images that I rediscovered in my archives while searching for another round of "The Missing", the important photos that I have somehow misplaced once again. The current "Missing" files number ten, indicating that no matter how I try to improve, I cannot overcome my natural tendencies toward disorder if not outright anarchy. In any case, about the only benefit of these frequently hopeless searches are the rediscoveries of other images. Upon rediscovery, it is usually only a small bout of post-processing to render these new images into something wonderful that I can be upset if I then lose them at a later date. This circular destiny is both funny and frightening.

This first image didn't require much work at all beyond just finding it again. It dates back about ten years,taken during an especially dismal evening when I tried to sell my work at an offshoot of the Market at Pioneer Courthouse Square in Downtown. As usual, a retail opportunity that should have worked - selling art at Christmas in the heart of Downtown - didn't work at all. The image is a very abstract view of the Xmas lights on the annual tree in the middle of the Square which towered over my booth. I was so cold that I couldn't possibly hold my iPhone reasonably still, and the result is this hyphenated and caffeinated view of Christmas. All I did was to darken the black of the tree; the lights needed no saturation. 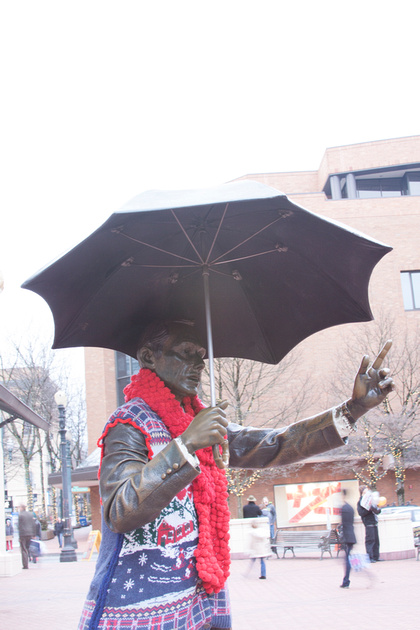 This snap, and it really doesn't even deserve that characterization, was taken during another Christmas in the Square a few years later. In my usual resistance to all things entrepreneurial, I had somehow neglected to try my hand at one of the most popular tourist shots in Portland. This is the "Allow Me" statue in the Square is by J. Seward Johnson, Jr., who duplicated it in various poses around the country. It pictures a typical downtown businessman about to aid some hapless tourist. Unfortunately, while the typical Portlander can be helpful, he holds only disdain for the "Suits", and certainly does not carry an umbrella.  The whole thing is rendered somewhat inauthentic. But at Christmas the statue is redeemed by a truly characteristic  act of "yarn bombing" which subjects a lot of our public art to knitted additions in the dead of night. 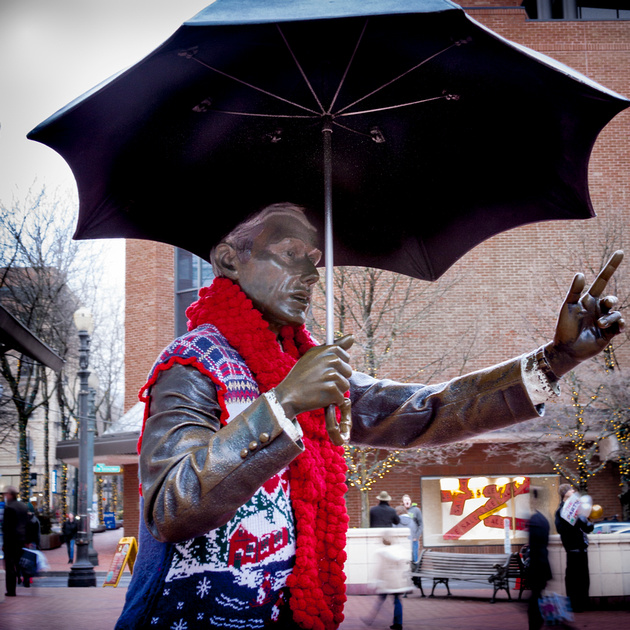 Let me help you with some work in Lightroom.  First the square crop, since this has some potential as a coaster, and the crop will eliminate some of the completely washed out sky that was the result of my overexposure. Then I used the angle tool to straighten the photo, on the theory that the lamp post in the rear was probably not falling over. To isolate the subject as if he was a supermodel, I simulated a two thousand dollar portrait lens by not only darkening the background, but also reducing it's sharpness and clarity, so that attention will be paid to our businessman. The final touch was to darken the umbrella and subtly lighten his bronze face to overcome the original backlighting. 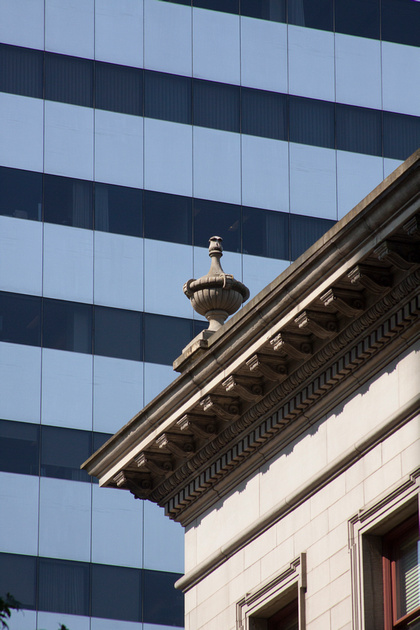 I rediscovered another of my "Portland Juxtapositions", this one that pits City Hall, a 1895 confectionery inspired by the  1888 design of the Old Executive Office Building next to the White House in Washington, D.C. That building is famous for governmental skullduggery, as well as being so over the top that it somehow survived numerous attempts at demolition by later generations overcome by its sheer wedding cake audaciousness. Our City Hall is fairly modest in comparison, and stands as another example of a building which survives mostly because we kind of know that we would only replace it with something worse. To the rear is one of our modern skyscrapers, the Pac West Center, built one hundred and six years later in1984. The building looks like it was zeroxed from the  1977 City Corp Building in New York. Its architect, Hugh Stubbins, probably said "why the hell not, no one will notice, it's three thousand miles away!" Portland has several examples of such architectural duplication. One of our bank buildings downtown has exactly the same window grills as the Lincoln Memorial, done by the same architect, which would only be recognized by another architect doing too much poking around Downtown. Thus it is somewhat ironic that this Portland Juxtaposition involves two buildings whose designs are moved from two cities on the East Coast to stand next to each other on the West Coast. 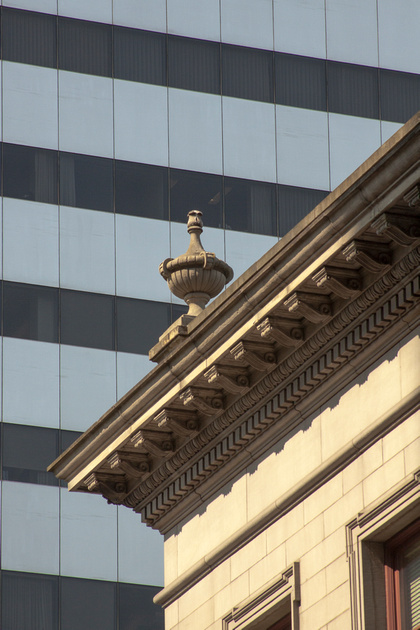 All I did to improve this image was to lower the highlights and raise the shadows, which is not my usual strategy which involves adding, not subtracting contrast. But in this case it revealed detail and color in both the sunlit facade and the elaborate cornice details, formerly hidden in shadows. The rest involved subtle cropping and straightening that probably only a photographer/architect truly cares about. If you notice, those pesky branches in the bottom left corner have disappeared, as have both the upper and lower window stripe fragments on our Citycorp copy in the rear. 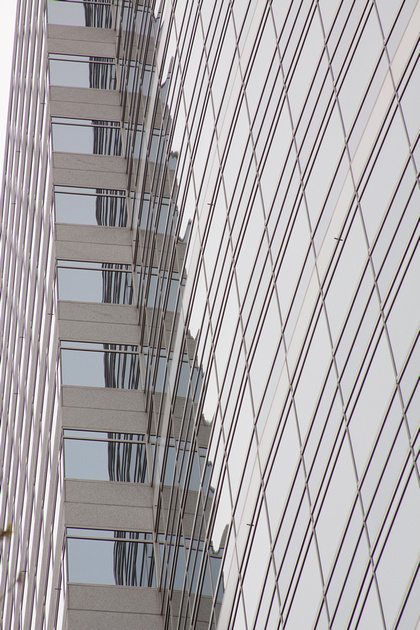 We now move to New York for a couple of images that I took while we were attending Benjamin and Margaret's wedding twelve years ago. This image is an example of my fascination with both minimalist glass facades and the reflections that are endemic in such buildings. Here you see what can happen if the architect is so bold as to throw in a corner - thus creating a dual reflection on the angled facade. 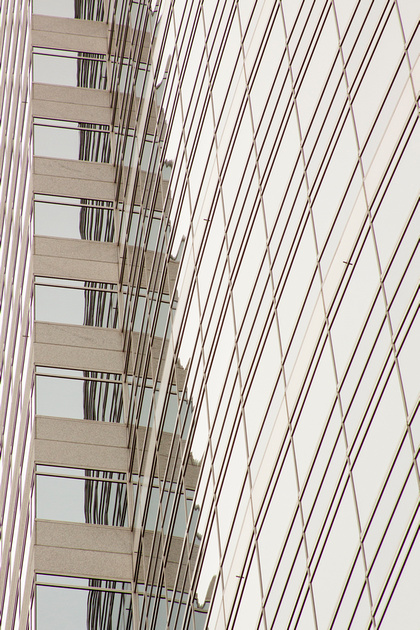 I tried here heighten this effect by both increasing the overall exposure of the photo while lowering the luminosity of just the tan solid portions of the facade. This both brightens the overall scene while increasing contrast without really darkening anything. The only added contrast is in the curving lines of the right portion of the facade. And while I appreciate the height of a New York tower compared to Stumptown's examples, I had to eliminate the sky at the upper left corner to heighten the graphic effect. 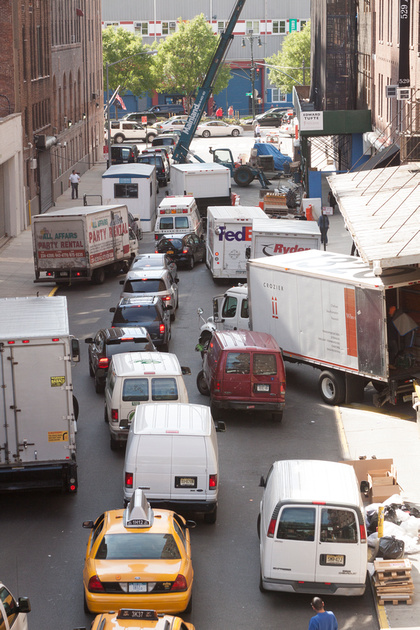 If you thought the Father of the Groom was nervous before his son's wedding, imagine how these unfortunate souls felt a dozen stories down on the street. Here we have what might be characterized as a typical example what can only be described as traffic malfeasance. And you wonder why it's not a good idea to allow more handguns on the streets of New York? 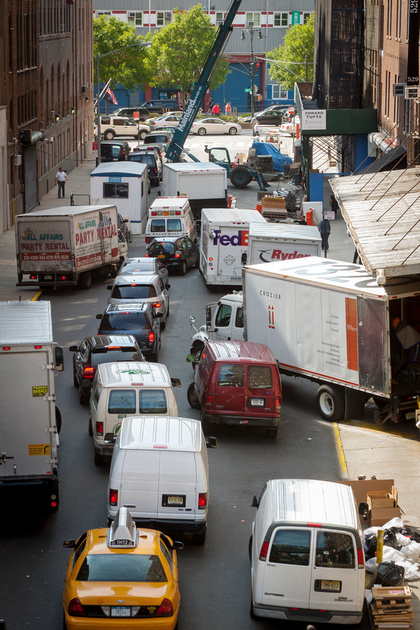 It took far less time for me to improve this image than it took to unravel this little vehicular nightmare. A little cropping to reduce a little of the chaos at the edges, like the upper torso of the jaywalker and the unnecessary  extra cab on the bottom edge, focused our attentions on the mess at the heart of the image. I reduced the glare on the right side of the street not bey reducing the exposure, which made it too dull and dark, but by selectively reducing the luminosity of the yellows which allowed for more detail on the sidewalk and the awning. Lightroom's Hue/Saturation/Luminosity controls can reveal the underlying colors of your image better, or at least different, than what your own eyes and brain tell you. Notice that reducing the sidewalk and the awning luminosity, which Lightroom told me was "yellow", actually revealed the yellow curb. When I tried to recover some punch in the yellow cab, it helped that Lightroom thought that the iconic New York yellow cab was really a little more orange than yellow. 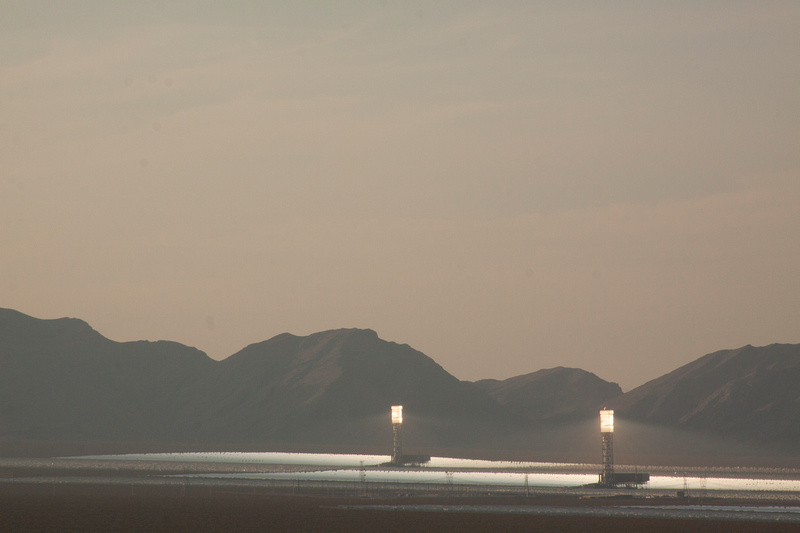 MYSTERY IN THE DESERT : ORIGINAL

Finally we have this surrealistic scene on the highway from Los Angeles to Las Vegas. I am not making this up, and it was not Area 51. With remnants of LA smog over the mountains beyond, we are looking at fields of solar collectors which are also functioning as mirrors to concentrate light, in reverse light house fashion, on those mysterious towers. Or at least that's what I think I saw.

MYSTERY IN THE DESERT : FINAL VERSION

It's not often that I use a 3:1 crop, because it's really very wide, but this scene seemed to justify such a frame. The drama and mystery was concentrated in a narrow wide band, and very little smoggy sky was needed above the mountain range. And if you think this was a weird spot, well you are a few minutes from Las Vegas, so it will get you in the mood.

I hope you have enjoyed another rescue mission, and encourage your own forays into your own photo archives - and hope you are more succesful than yours truly in keeping track of your images.