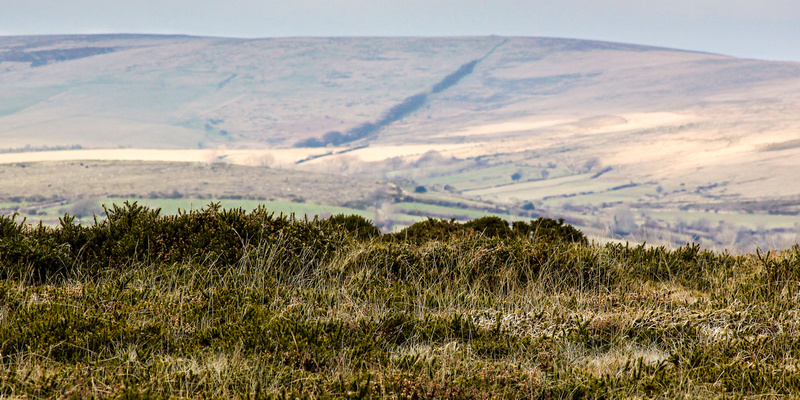 ON THE EDGE OF THE MOOR : FINAL VERSION

This week I'd like to make a return trip to Dartmoor, at least through the magic of Lightroom. I've been fortunate to have visited this extraordinary National Park in Southwest England twice, alone in 1976 and with Fran in 2009. For this city boy it is one of the most wonderful landscapes I have ever encountered, wild but not wilderness. This 30-mile square patch of moorland has successfully resisted human occupation and improvement for over 2000 years, even though it is the midst of England's "green and pleasant land." There are only two roads that cross the moor, meeting at the United Kingdom's highest security prison, which is not that fortified at all. Unless you have a getaway car or helicopter waiting outside the prison walls, you will almost certainly die trying to cross the moorland at night. It's that forbidding. The only thing that seems to have changed in the years since my last visit is that you can now watch videos of hikers who walk across the moor in one day, since it is only 30 miles across, but I certainly don't think it's for the faint of heart. For the usual visitor, an excursion around the moor, skirting its edges, is more than enough to get the flavor without the risk. While there are some picturesque villages on the edge of the moor, there is nothing between them, and you might never see another car as you wander about.

While I frequently misplace images in my archives, I very rarely delete them. For one thing the neighboring images provide clues as I search for the mislaid files; but they also provide the opportunity to revisit the day I captured the original images more than a decade ago. I am frequently taken aback at the quality of the images that I have ignored all this time. We are so determined to find the "best" image of the day that we overlook other shots that deserve another look. The opportunity of hindsight, fond memories, and the advent of new software technologies allows you to realize that your new skills can transform the original snapshots you ignored into images that you can be proud of. While they might not be the original "keepers", how else can I walk around Dartmoor again without traveling 6000 miles to get there? 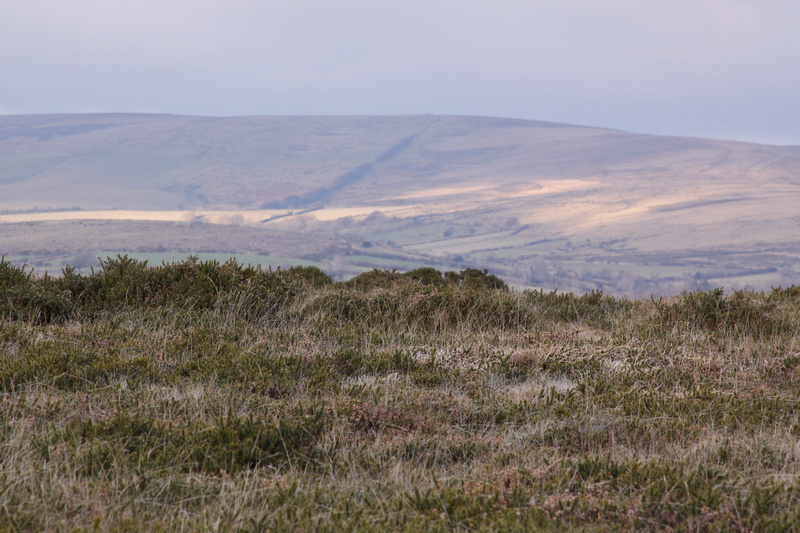 ON THE EDGE OF THE MOOR : ORIGINAL SNAPSHOT

This first shot is a lot better than most that will follow. It's certainly a little dull, but nothing to be ashamed of, taken from the side of the road. It gives a hint of the emptiness beyond the road - but the final image shows the benefits of a panoramic crop that eliminates most of the dull sky and foreground that adds nothing to the scene. The usual sharpening required of digital images reveals the texture of the moor that dissuades casual exploration even before the ground gives way to the wilderness beyond. Judicious dodging and burning of the rolling landscape beyond brings out the details and reveals the variations in that landscape that encouraged me to stop in the first place. As usual the idea is to create some "pop" without losing the feeling of the original reality that the viewer can believe in. You are the ultimate judge. 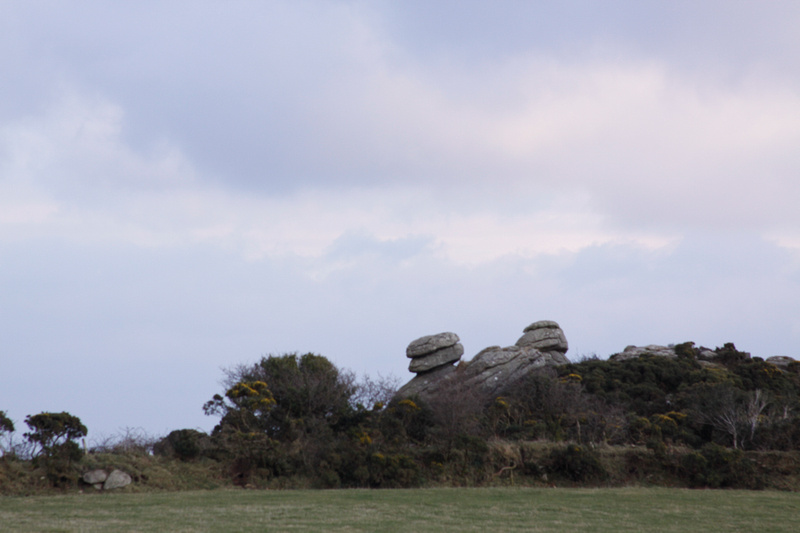 One of the features of the landscape of the moor are the occasional rocky outcroppings that can provide the only guide posts as you attempt to cross the forbidding landscape. This is a rare example right off the road. While there are cairns that are landmarks left by hikers who died way before you were born, it is obvious that no humans moved these rocks. They are the rocks underlying the entire area which have appeared above the surface, and grow more prominent as the surrounding soils are laid down and eroded. This being England, of course the 360 known Tors in Dartmoor have been mapped and named, for posterity. 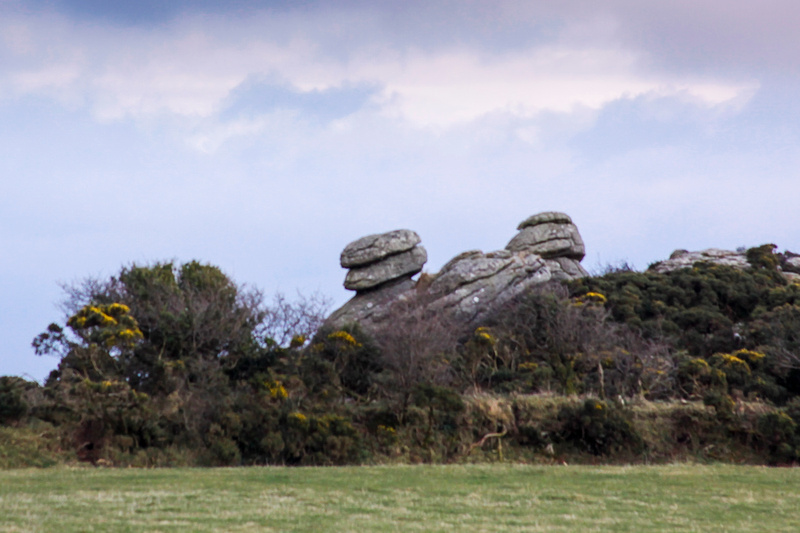 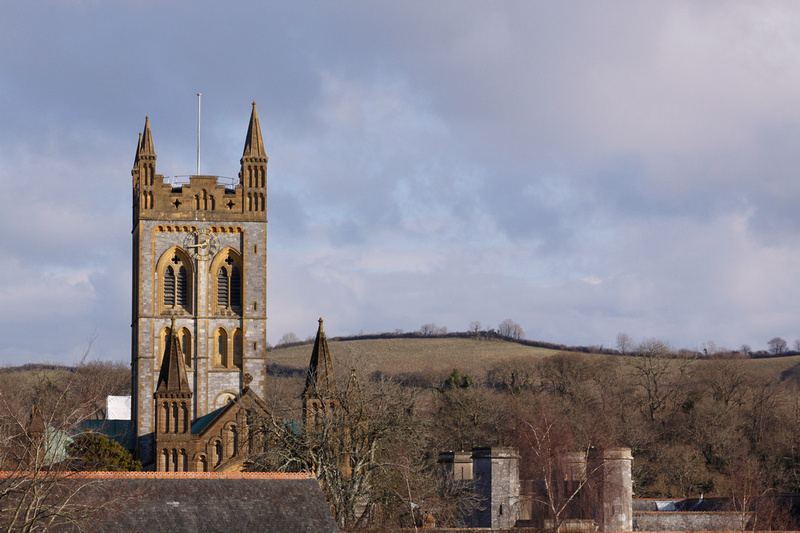 One of the villages at the edge of the moor had a splendid church, mysteriously grand for the village while fitting in with the grand landscape beyond. My original snapshot concentrated on the tower but still included too much of the surroundings I was trying to ignore. 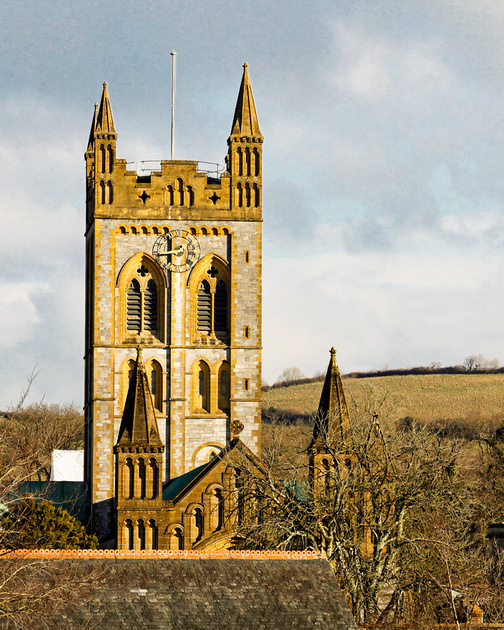 This vertical crop left out the confusing roof tops on the right of the original image. In addition sharpening brought out the details of the church tower, and a "Sunshine " filter reinforced the sunlight on the tower without blowing out the sky. Noise reduction software reduced the digital noise present in the sky. 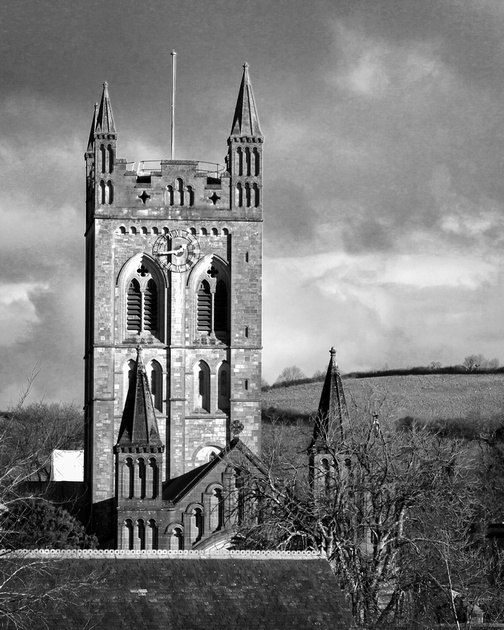 This image gained a lot of "mood" in this black and white variation. While I miss the warm masonry, the sky is very much more interesting than the color version. The contrast in this sky would not be realistic in color. 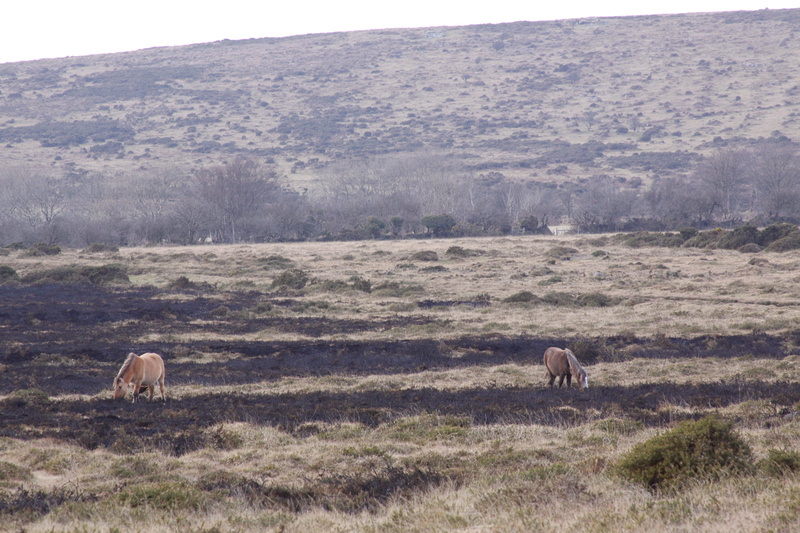 Dartmoor's lack of human habitation has allowed a distinctive form of wild horses to thrive on the moor for thousands of years. My original snapshot from the road captures the environment but neglects the real subject. The sky is completely blown out. The photo also illustrates the problem of "two" of anything, since the two horses compete for your attention - odd numbers are almost always better, for some reason that brain research has still not answered. 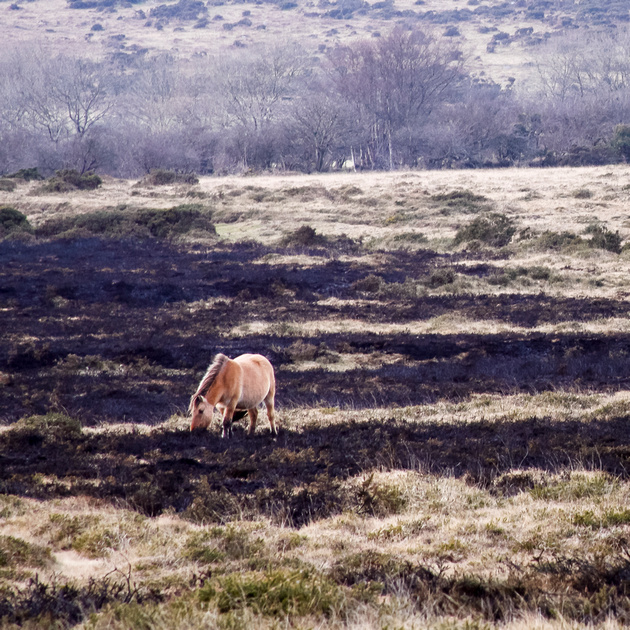 I'm still too far away, but at least there is only one horse, and you can begin to appreciate the heather as much as the horse does. The contrast in the scene has drastically improved,  and the feeling of desolation has not been lessened by the absence of a featureless sky. 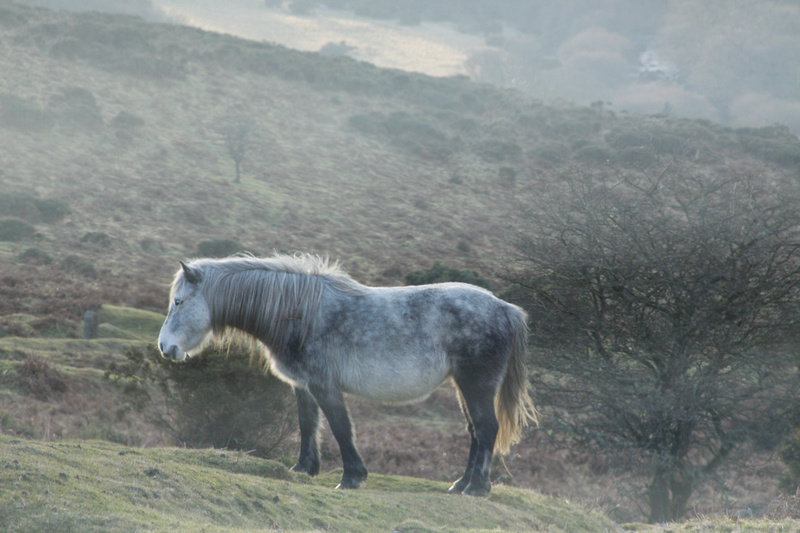 This original snapshot illustrates the truism that it is perfectly possible to belittle your photographic efforts because after all, you are not a nature photographer. Well, I'm not, but this isn't half bad, and it does have some nice back lighting. It just need a little help. 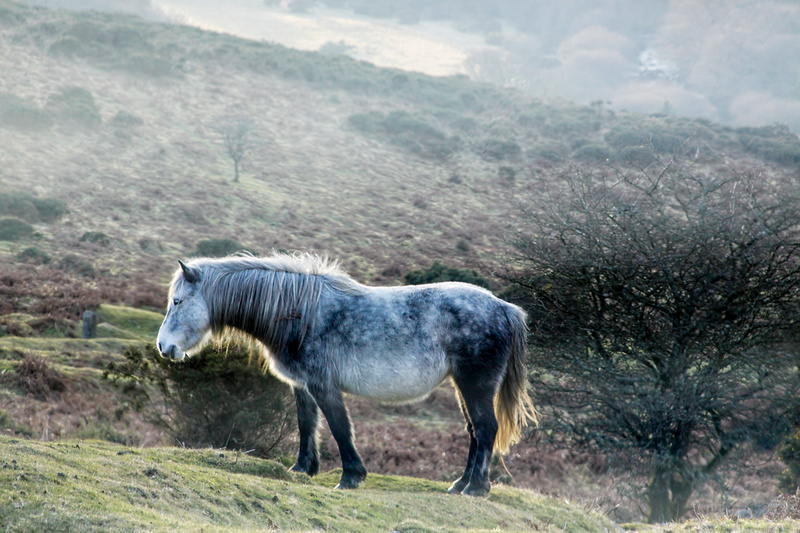 The image has now gotten the attention it deserves. Stretching the white and black points has enriched the image without raising the exposure - the scene is brighter, and the increased contrast has really brought out the tree, as has the sharpening overall. The back lighting is still there, but the horse is now black and white rather than gray and white. Dodging and burning, which involves darkening the darker areas on the hill while lightening the lighter areas, has enlivened the background. This tactic is so subtle that I can't even appreciate it all while I am doing it - the brush, set at 10%, doesn't seem to be having an effect. It's only when you toggle before and after that you see how much it really changes the image. 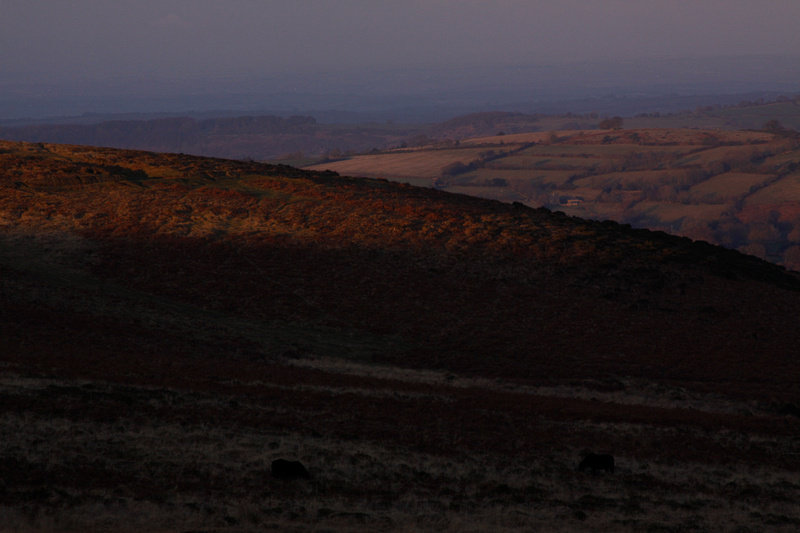 Finally we have the most dramatic transformation. Don't throw anything away! This snapshot was so underexposed that it is a wonder that I just didn't hit delete. It had nothing to do with the scene in front of me, but the raw file's hidden information allows you to overcome your initial miscalculation. 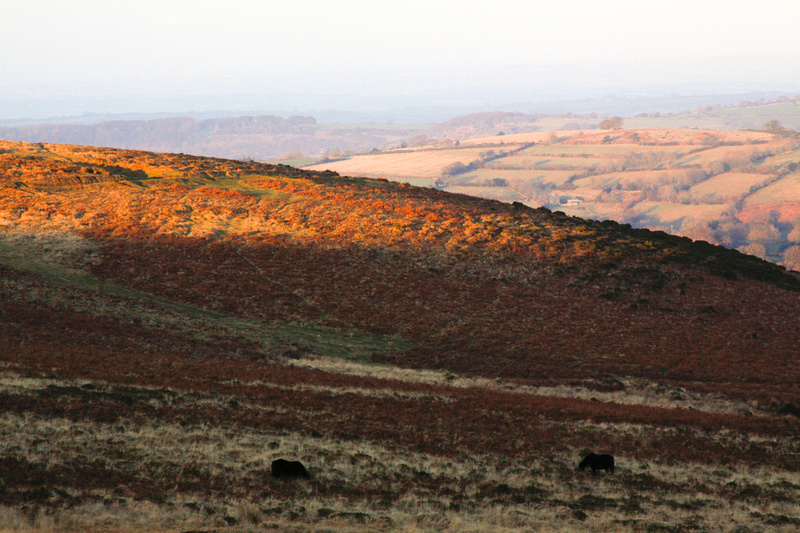 Now you can see why I stopped to take the photograph. The sunlit hill is glorious, and there is now both a foreground and a background where there was just murk. 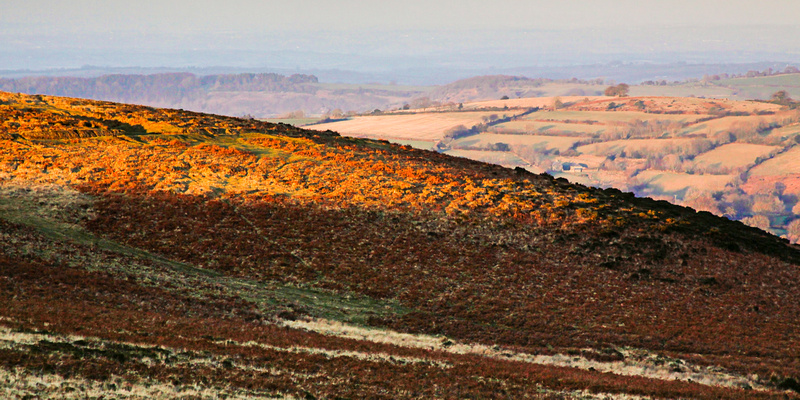 Now that we have an actual photograph we can work on the image. The panoramic crop loses some sky and a lot of foreground along with the inconsequential horses. And even though the moorland is not flat, "correcting" the horizon just feels better even if it is not strictly correct. Lightening the shadow areas and adding some "sun" to the sunlit areas adds to the richness of the scene. Sharpening helps both the textures on the hill and defines the fields beyond it.

These six images are prime examples of the value in not throwing anything away. Storage is getting cheaper all of the time, and nobody else will ever delve into your archives, so at least take a look every once in a while to see if there is anything there that can whet your interest. You will most certainly not regret it.