AUTUMN AT THE JAPANESE GARDEN This week I would like to take you on a short walk through Portland's Japanese Garden. We finally had "football weather" yesterday, clear, sunny, and cold so I finally got out on a photo excursion with my friend Al. The Garden was absolutely spectacular, probably only a week past peak fall foliage, and the tourists were out in droves. This was my first visit to the Garden since Covid, so I really enjoyed the walk despite the cold. What's funny about Portland micro climates is that Fall is so late this year that the trees on my block or at the Saturday Market site at Waterfront Park have not even begun to turn color at all, while the higher elevation of the Garden finally let me see some Fall colors. I renewed my membership at the Garden after I realized that like a lot of other activities, I had not been there in three years.

Portland's Japanese Garden is nearly 60 years old and is thought to be the most authentic Japanese garden outside of Japan itself. The plantings, design, and details at the garden are so wonderful that a visit can elevate your opinion of the human race as a whole, which goes a long way in these trying times. I'm going to highlight six photos from this latest visit, to illustrate how relatively easy it is to come away from such a visit with memorable images - even if they are not on the greatest hits list at the postcard stand at the gift shop. This is my visit, or your visit after all, and your photos should reflect what actually moved you at the garden. After many years, not only have I have versions of these usual suspects, but I have multiple versions, so my interests have to focus on different takes on the garden. These six images were selected from about sixty photos that I captured yesterday, and each was enhanced by only a few minutes of post processing. 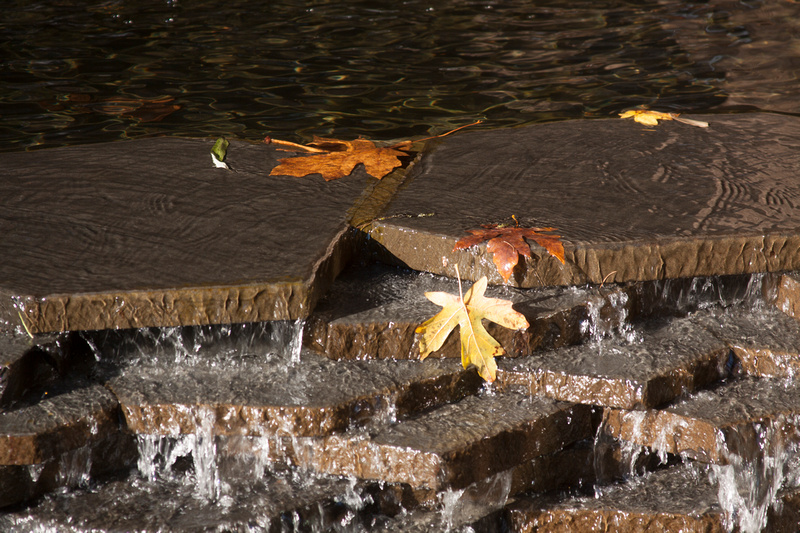 This first image was literally taken while standing on line at the entrance to the Garden. The most recent renovations and additions to the Garden completely reshaped and enhanced the entry sequence up the hill to the new cultural exhibits, gift shop, cafe and courtyard which gives the garden the entry it always deserved. The design and detailing of this new "Cultural Crossing" by renowned architect Kengo Kuma is enough to take your breath away and wonder about what can be accomplished by an architect when price is no object. My editing brought more attention to the leaves caught in the fountain, and enhanced the colors through both saturation controls and bring down the exposure, which has enhanced saturation since slide film days. 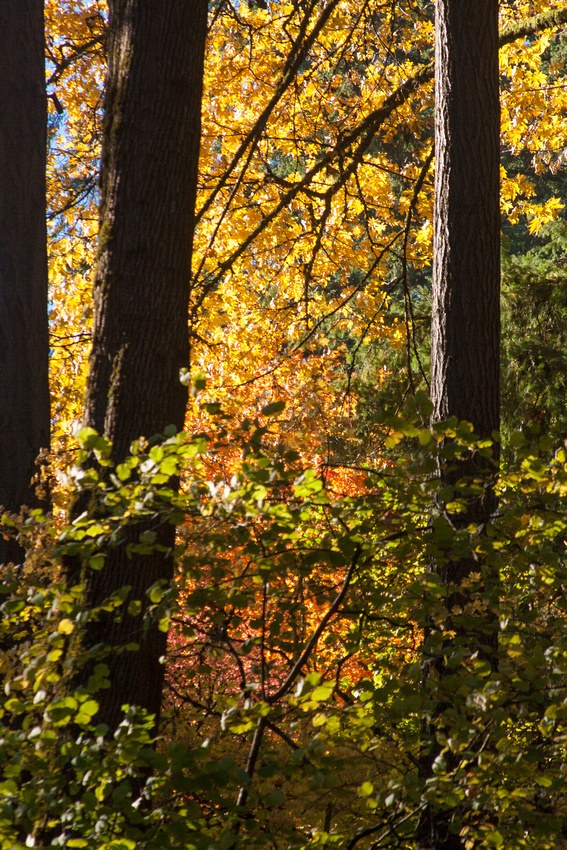 COLOR THROUGH THE TREES : FINAL VERSION

This image didn't need much help beyond the usual sharpening and raising the shadows in the foreground. My framing of this view on the entrance path up the hill had already solved most of the problems with woodland (or garden) photos, by restricting the sky to a very small part of the image. Now your attention is focused on the color beyond the trees instead of the bright sky which always compete with what you are actually trying to show the viewer. 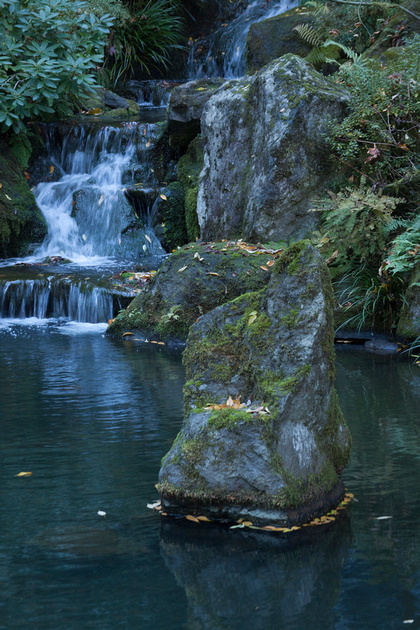 This is an example of a "quiet image" whose discovery can thrill me after I have walked by the greatest hits, or the dozens of photographers who are taking photos of said greatest hit. "The Tree", made famous in the National Geographic, is just around the corner overlooking this same pond. The path up there is divided so that visitors can get around the line of photographers and their tripods who are allocated ten minutes each to get the shot. Since it was a week after peak, and not soon after sunrise, there was no point in taking another shot. But this rock caugt muy attention for the first time, mostly because of the leaves collecting in the water around it. 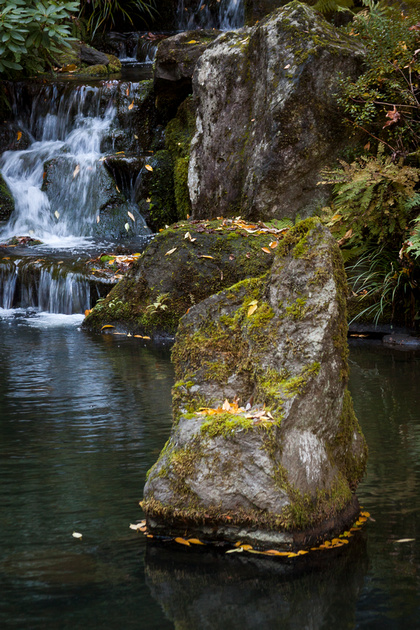 I hope you agree that I have improved the image without going so far that it now lacks credibility. The slight crop naturally enlarges the rock by eliminating some boredom to the left and top of the original. More important is the adjusted color balance which eliminates a frightful blue shift apparent once you have adjusted it - sometimes our brains, which adjust colors on their own, can ignore an obvious color shift that our stupid cameras cannot ignore. Some subtle saturation to only the relevant colors bring out the orange leaves around the rock. But I am most proud of all of the subtle brushing that lightened the star rock while darkening the rocks behind it. This dodging and burning, just like in the darkroom, is so subtle that you almost can't see it while you are manipulating the controls. It's only after you compare before and after that you can see the dramatic, but hopefully "invisible" results of all your work. 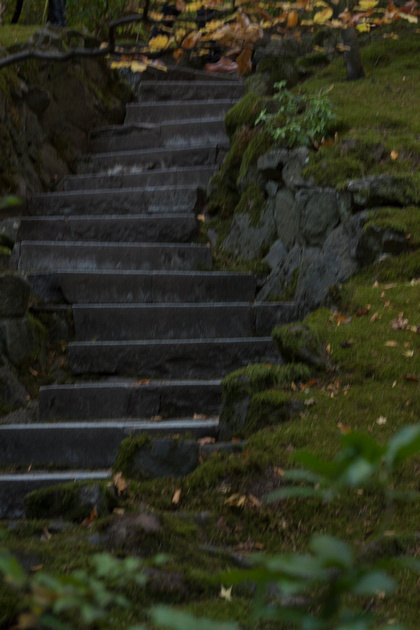 Don't throw anything away. Just because you grossly underexposed a shot in camera, rendering what might be a nice composition into a muddy mess, doesn't mean you cannot redeem yourself later. I probably committed such an error only because I was contemplating how far I now had to climb back up the hill. Now you can see what caused me to take the shot in the first place. I raised the exposure a full stop overall, and then went to work on the shadows of the stonework on the left. I then painted back the exposure of those two sunny steps at the bottom which had gotten too bright and drew you attention away from the lovely curve of the stair. Its this kind of attention to detail that can make your heart sing on a walk through the Garden. 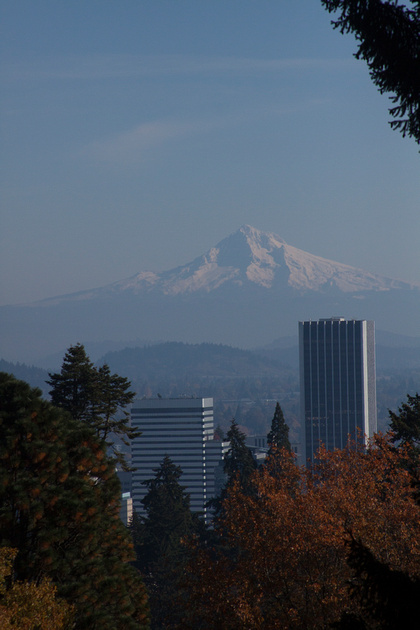 Okay, the Garden is at the top of a hill in Washington Park, and of course you deserve a view from the Garden. In Portland, a view means the Mountain, which might not appear when you most want to see it. This snapshot needs some work to make it deserve its subject. 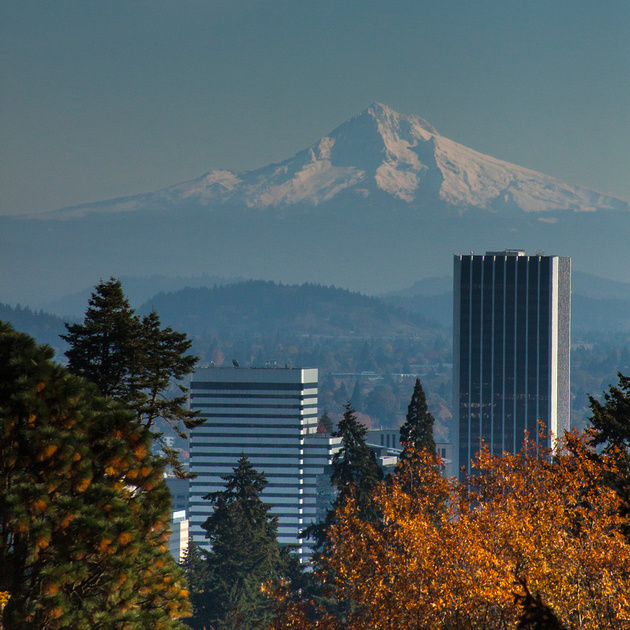 You can argue with the square crop, but I've got to sell coasters. I would have needed to erase the overhanging tree in any case. I shifted the color balance a little from the original blue, and lowered the exposure of the sky to balance it with the foreground. I then painted it back to brighten the mountain, which is nicely covered with snow after a very dry Summer. You might not care, but as a retired architect I had to straighten the towers so they would not fall down. I finally lightened the shadows in the foreground to bring out the tree and prove it was Autumn. 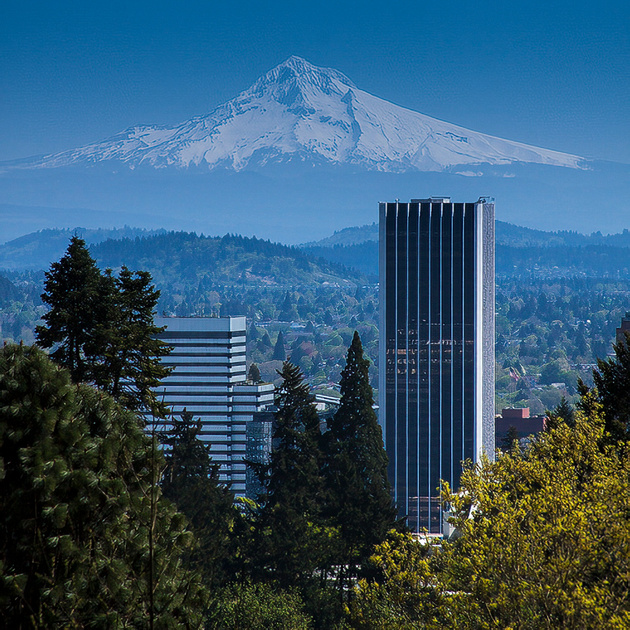 We are our own toughest critics. I've obviously been here before, and have sold many  coasters of this image. Which one is better? Does it even matter? They are not different enough that they can both "survive", but we must compare and contrast. The Autumn tree is an obvious improvement, I guess, but I somehow like the bluer sky even if it is less realistic. A subtle shift in perspective - probably only ten feet to the right - has now revealed some irrelevant buildings to the left, but has eliminated the disorderly base of the taller tower. Does the improvement in the tree make up for the intriguing colors in the windows of the tower? I probably will take another stab at the new image and bring back some of the blue in the sky. Frequently I only can really stop working on an image when I show Fran the final two versions. When she questions my sanity while declaring that they really are the same - then I know that I've probably reached an end point, at least for today. THE VIEW OFF THE PORCH : ORIGINAL SNAPSHOT

I have taken this image many times. It is almost impossible not to respond to this artful arrangement of dozens of beautiful trees of all shapes, colors, and sizes across the pond of white sand.  The Fall colors only add to the scene. What was interesting was that for the first time since I have been going to the Garden in the last thirty years, the traditional garden pavilion was actually open when I stood on this porch. THE VIEW OFF THE PORCH : FINAL VERSION

Now we have a picture! Some very judicious cropping has tightened up the composition, but the composition has come alive by allowing the colors to shine, by virtually, but realistically, screaming Autumn! What is interesting is that this again is mostly accomplished by removing that pesky blue tint, most apparent in the now white sand. And when you have such a perfect scene as this one, you must spend a little time cleaning up the sand by eliminating any debris that has encroached on the sand since the staff cleaned it this morning.

I hope you have enjoyed this short virtual visit to the Garden. The most important reason we should attempt to create images of wonders like this garden is that it provides yet another excuse for going there for the first time, or the fiftieth time. The search for a new take on what is for me a very familiar but wonderful subject provided me an excuse for an engaging day with a friend, far more important than any image I might capture at the same time.