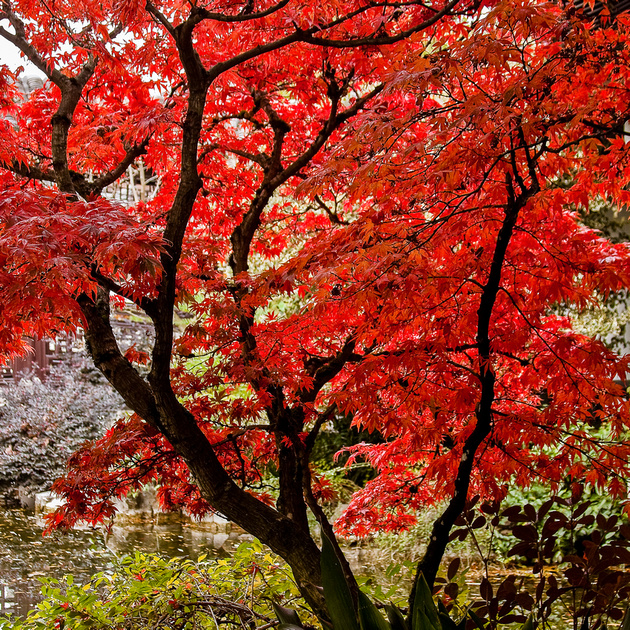 This week I thought that I would celebrate Thanksgiving by taking a look at some photos that I had created in the last 15 years at around this time of year, the tail end of November. In looking through the archives, I had the usual problems of misplaced images, but I did manage to find about ten images that fit this Thanksgiving criteria. And as usual I also discovered one image that deserved to be rescued from the murky depths of the archives - now I just have make sure that it doesn't disappear again now that it has been anointed as a "keeper." 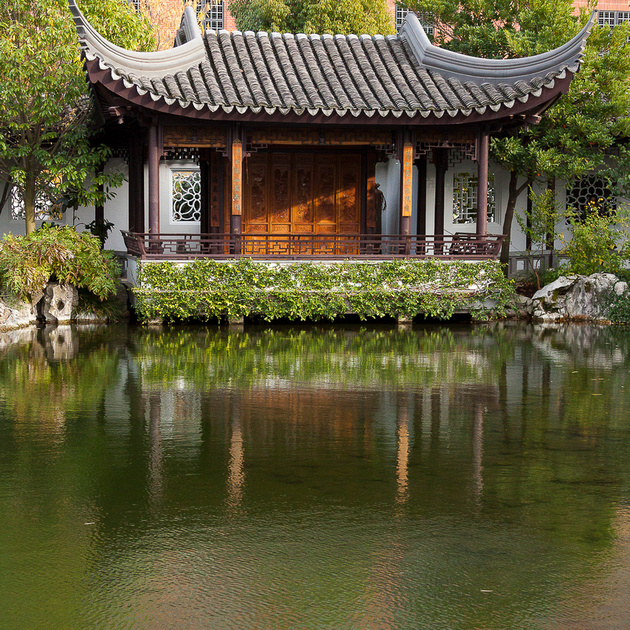 I've agreed in the past that Ansel Adams was correct when he cited a ratio of 1 keeper out of 100 photos taken as a realistic goal to shoot for when heading out for a photo excursion. While this might seem depressing, it does free up some room for experimentation, and reinforces the belief that we are in this for the experience, the process of taking and creating images, rather than for the rare result of a winner. Getting outside, and learning our art, really provides most of the excuse we need to try once again in the face of the fact that most of our results will not measure up to our own standards. In regards to the 1/100 ratio we've discussed, it is interesting that the oft-cited rule that a real education requires 10,000 hours, or in this case 10,000 photos, that the results of such an effort would yield a nice portfolio of 100 images - which would be more than enough to justify the pursuit. 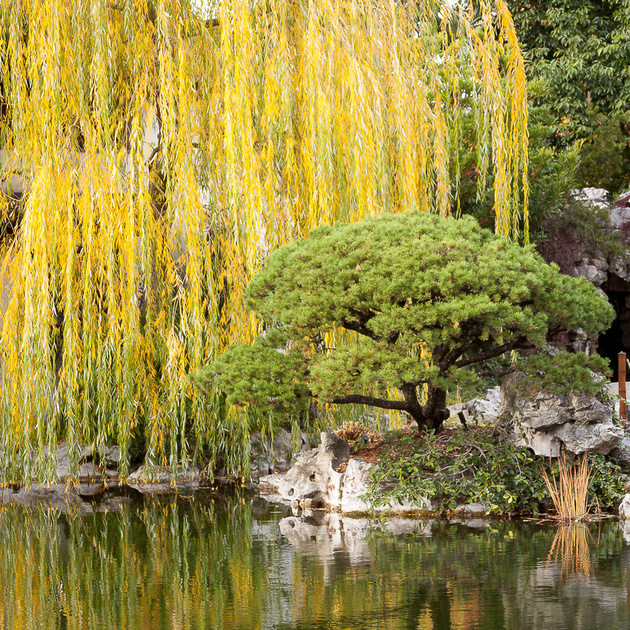 So imagine my shock when in investigating my Thanksgiving work over the years I uncovered two very interesting statistics. The first did not surprise me in the least - the paucity of images from late November. Portland, Oregon is not known for its great weather in late Fall, and I'm not alone in feeling that there is nothing as nasty as rain and 42 degrees, even though it's not a blizzard. It's not invigorating "football weather" either, so it did not surprise me when there were not that many images in the archives from late November. On the other hand, in the space of ten days at the end of November in 2009, I captured six images that rank among the best I have ever created - a run of imagery that resembles an undefeated college football team vying for the playoffs. Four of these images were taken on the same day, which I now realize was probably my best day ever as an artist. 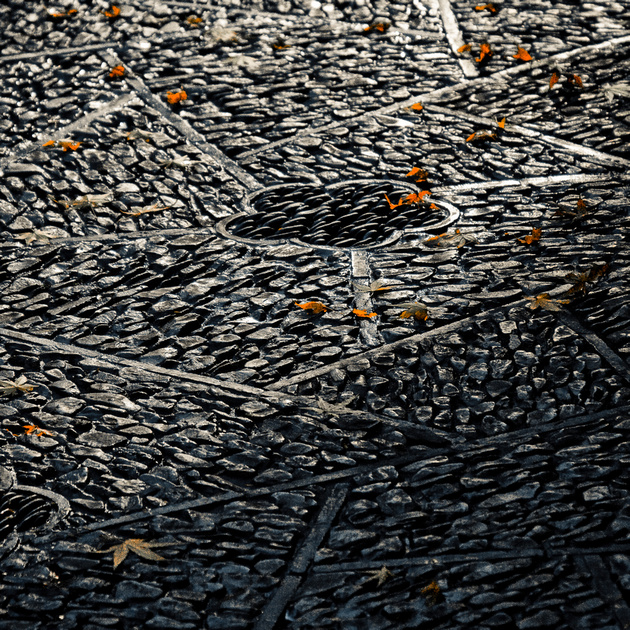 These first four images were taken on one trip to the Lan-Su Chinese Garden on November 21, 2009. I obviously was having a very good day artistically, and after ten years of further visits to to the Garden I probably have not created much better imagery than on that day. The garden's beauty obviously didn't hurt, but I can honestly say that after taking and seeing hundreds of fine photographs of the Garden, these are pretty damn good. More importantly, they exhibit the qualities that run through my work - they are obviously my take on the Garden, and fit in with my best work, whatever the subject. When viewed in my tent in the Market, they are exemplary examples of my "photographic voice".

The first image is just such a "Rich"photo. It is a beautiful Japanese Maple, on the best day of its life. It takes up so much of the frame that it doesn't matter that I did not include the whole tree. Further inspection of the image might reveal its surroundings, including the pond just behind it, but the tree is almost the idea of a tree, or at least a Japanese Maple. It only adds to my pride in the fact that "My Tree" is not "The Tree" which is such a popular photographic subject that people must wait on line in order to capture the same image that they have seen thousands of times before.

The second image is of one of the iconic buildings in the Garden. I am very proud of what I didn't include in my tight framing - the only really bad detail in the Garden - the ugly concrete bridges that lead to this island, as well as the exceedingly blase office building rising above the pavilion. This building which i managed to ignore is in fact one of the few hints in the Garden that you are actually in Portland and not in China.

The third image is even more "quiet", but I did grab another great reflection while appreciating the skill the Garden's designers in placing four different foliage types and some crazy rocks in such a small space. I'm a sucker for weeping willows, and yellow is one of my favorite colors.

The fourth image is one of my favorites, since it combines my love of craftsmanship with a bent toward the abstract. Viewers are frequently very confused by what they are admiring, which some imagine as an aerial shot of some ancient city. Almost all of the Garden's pathways are paved in rocks imported from China, placed by artisans in a concrete base between slate borders. Each garden room has its own design.This is a detail of the "Garden of Cracked Ice". I thought that I could increase the abstraction by not including any hints of what surrounds this beautiful floor. Another level of abstraction is achieved in that while this is a color photo - note those radioactive leaves - I have increased the contrast to such a high level that the  brown stone floor is now rendered in near black to almost white. 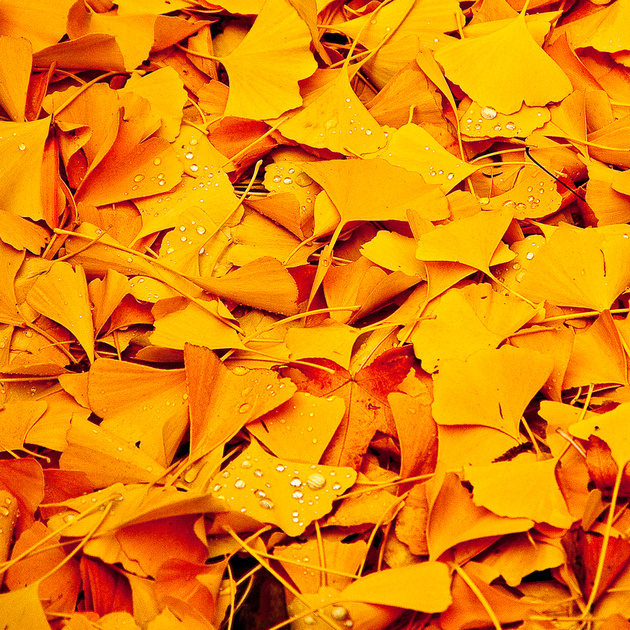 The Garden is so beautiful that even it's debris is worthy of photographic attention. These fallen Gingko leaves, somewhere between orange and yellow, covered the planting strip outside the Garden's perimeter wall. The viewer has no idea whether this pattern extends for another few feet or only another few inches. The reality of the situation was that any less of an intensive view would have revealed that this was just a pile of leaves on the street and that I was sitting on a fire hydrant. Art is not reality. 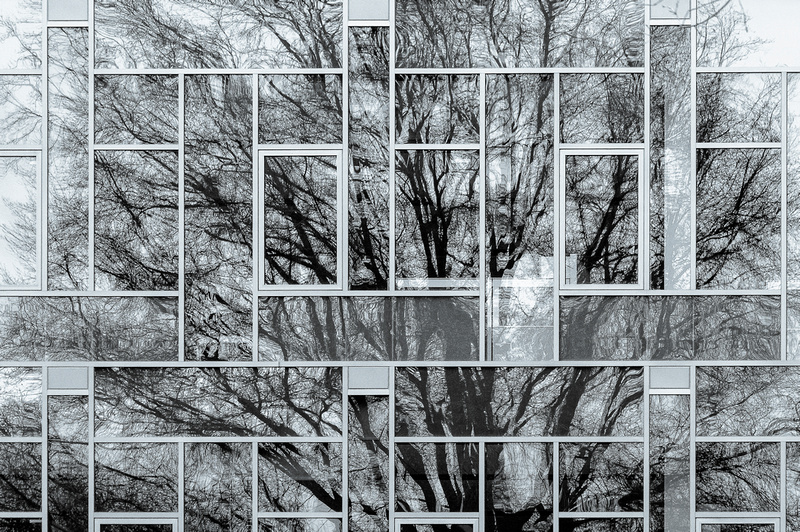 As it happens, within a few days I captured another two of my most admired images. This first is of a reflection of a tree in the glass facade of the Mercy Corps headquarters building across from Saturday Market. It is a straight shot - all I did was crop to eliminate any building edges and turn the green shade of glass, which I hate, to a more pleasing gray by rendering the image in black and white. It says something about our photographic moment in that most viewers think that this is a triumph of my post-processing technique; they think that this is a composite, which each portion of the tree placed skillfully by yours truly in the spaces of the grid. My artistic skill of actual observation and composition is only revealed when I draw their attention to the tree and the building across the street.

CLOUDY WITH A CHANCE OF LANTERNS

CLOUDY WITH A CHANCE OF LANTERNS : FINAL VERSION

I then went to a Chinese art exhibit at the Portland Art Museum. The exhibit was okay, but the Chinese lanterns placed over the sculpture court were absolutely beautiful and pretty surreal in contrast with the stolid brick of the museum beyond. My tight crop which neglected any of the sculptures and the edge of the museum beyond further contributes to the weird atmosphere of the image. By the way, those two slits in the obscured-glass wall that separates the interior sculpture court from the public pedestrian walkway beyond are my only contribution to the architecture of Downtown Portland. I insisted that the public deserved some glimpses of the sculpture through the block-long wall, and in a rare show of good sense the powers-that-be actually agreed with me. 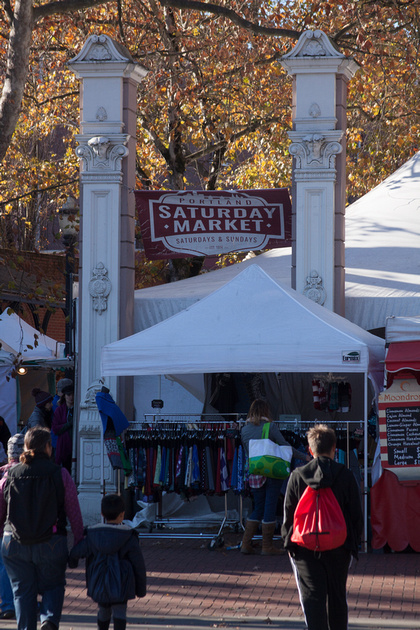 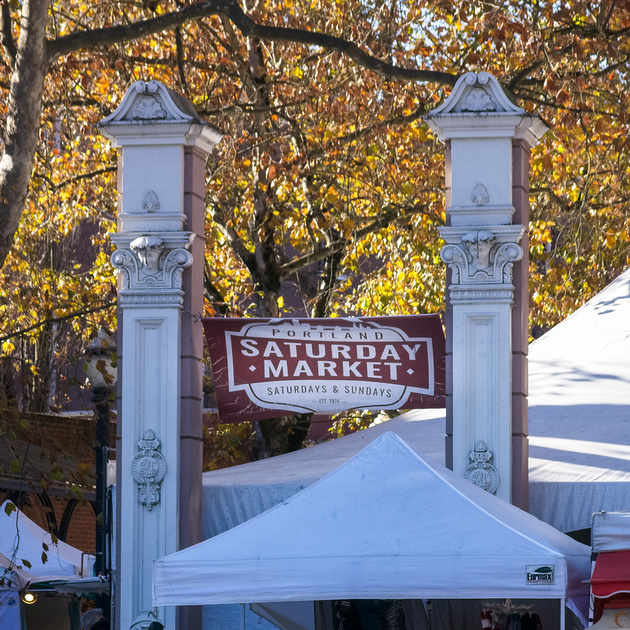 That same week at the Market it finally occurred to me (duh!) that it might be a good idea to include a Saturday Market image as a coaster to sell  to visitors at the Market! I patiently waited to cross the street and took this wobbly snapshot that eventually became the image below. Sometimes a smaller portion of a photograph clearly says more than the actual scene you captured in the moment.

A few days later Fran dragged me out for one of her forays into obscure natural areas surrounding Portland that she finds on the Web. She finds Nature Preserves without wildlife and her specialty, wetlands without water. We always have a good time despite the false advertising. This noble tree stood alone, with not a bird in sight. In my search for Thanksgiving imagery, I couldn't believe that I had neglected this tree. 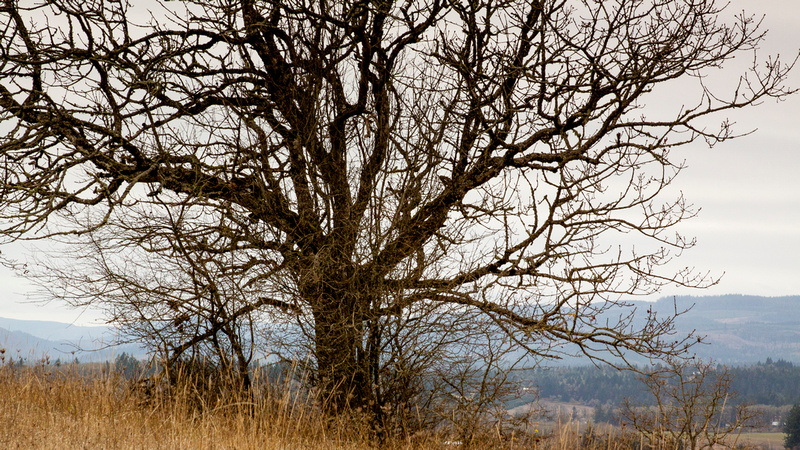 I adjusted the tonal values of the sky and the foreground grasses, opening up the shadows but still leaving the silhouette of the tree intact. I tried for my usual 2:1 wide crop to emphasize the extent of the tree and to reduce the foreground, but it was too tight. For this shot the slightly more open 16:9 crop gave me the surroundings I needed. I usually avoid the 16:9 ratio which I feel is totally arbitrary since it is based on the proportions of your wide screen television. I don't see what that has to do with photography, so I usually just go with 18:9, but there you go. 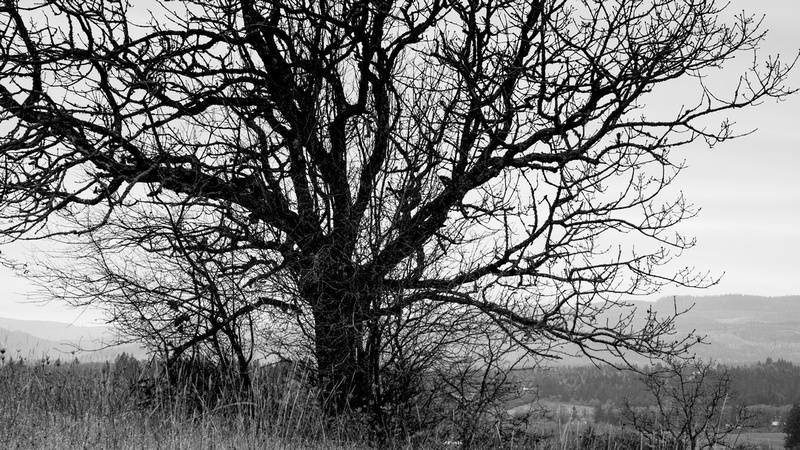 Faced with muted colors, I invariably reach for a black and white conversion. I like the mood of this version a little better, and it allows me to add a little more sharpening for more detail and darken the tree for a more graphic rendition. 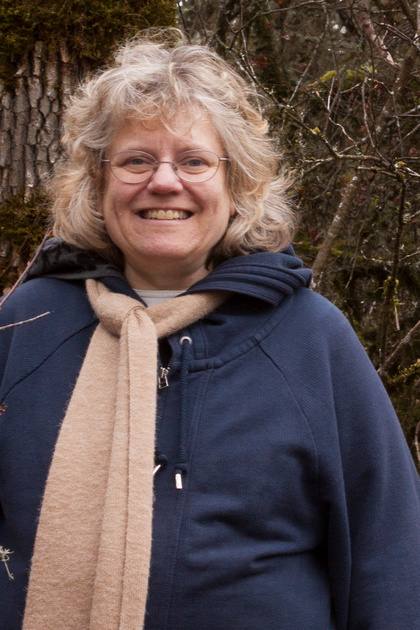 THE MUSE, ON THE TRAIL : FINAL VERSION

So sometimes it does seem that a particular time and place can lead to an artistic winning streak. While I am always grateful for our life in such a beautiful environment, and for Saturday Market which has allowed me a unique venue to exhibit and sell my art, it goes without saying that Fran, my biggest supporter, in every sense of the term, has allowed me the space to pursue my artistic journey. On this Thanksgiving I once again reserve most of my thanks to her.