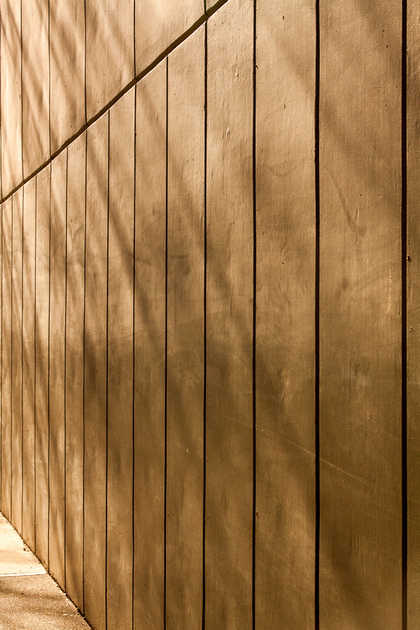 EVEN A CONCRETE WALL CAN ATTRACT YOUR EYE : FINAL VERSION

While I was on yet another rescue mission in my archives I noticed that a number of the formerly neglected images that I had saved from the trash heap had one common theme. This theme of repetition was apparent despite the widely divergent "subjects" of the photographs. I feel that this compositional device can both draw viewers into the image and serve as an organizing principle that can ground the viewers in your way of seeing. I think of it as a more subtle expression of "leading lines", with volumes or objects or areas of an image repeating across an image and subtly holding it together. Let's look at six images for clues on how you can use this idea in your compositions, both when you are viewing the world and maybe years later when you are wondering what in the heck drew you to taking that photograph in the first place. Post processing allows you to both improve the image in all the usual ways - sharpening, cropping, etc. - and then enhance the image by emphasizing the repetition that you hope the viewer will wrap their brains around. 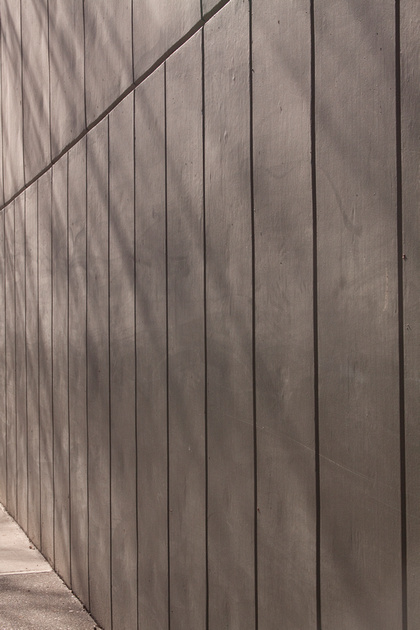 This first image has all the attractions of a dull concrete wall, the kind of scene that architects like me decried and tried to ban from the urban fabric of Downtown Portland. This doesn't make for a lively cityscape. Even in our miniature city, with it's tiny 200-foot long blocks that promise quick relief no matter how bad the building that is ruining your walk, it is hard to love such a forbidding wall. But the photographer can come to the rescue by seeing the hidden beauty of this landscape! The first thing I did was to adjust the color balance to more accurately reflect the lighting conditions on that day a decade ago. Who am I kidding - I don't remember what that day was like, and I am glad that a detective is not interrogating me about it. But the shadows on the wall hinted that it was a little sunny out, and these shadows "allowed" me to pretend that that the photograph was taken in the shade. This warmed up the scene considerably, and if the concrete is not exactly "golden", it is certainly more attractive. But the real reason I was suddenly intrigued by the photograph was the repetitive vertical lines of the concrete panels that drew my eye down the street. Since the image was now all bout those lines, this anal photographer had to correct the verticals by straightening the center vertical panel line. This is easier than actually warping the perspective, but in this case it worked like a charm, and even the line next to the right edge of the frame is no longer wonky. All that was left to do was to lighten the exposure a little, but increase the contrast so that the lines would rule the composition by becoming true black. A very nice side benefit was that this also brought out the slanting light and shadow of the sunlight against the concrete as another repetitive element in the image. 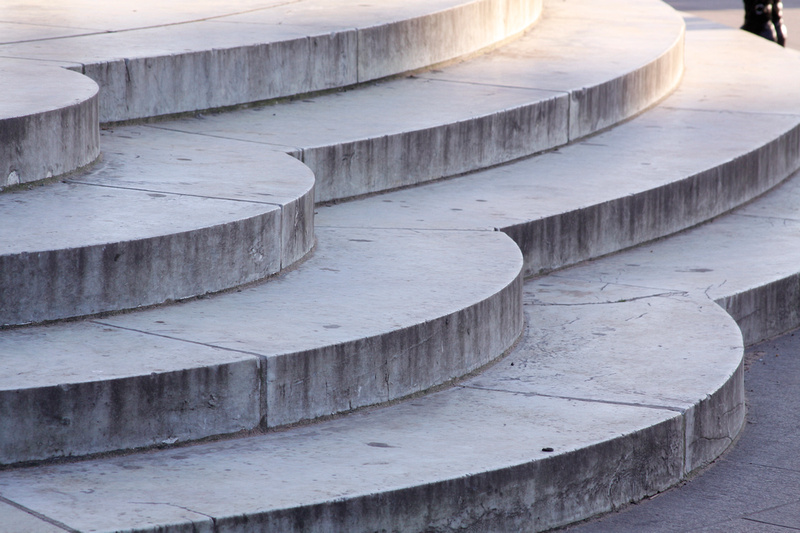 If my art can enliven a dull wall, what about a series of stone steps? I was drawn to these scalloped terraces near Buckingham Palace in just the way that the designer had hoped. It was now up to me to heighten that sense of repetition that I felt. The square crop was one way to eliminate the pesky human legs in the upper right corner, and I moved it around the original shot to find the right combination of repetitive scallops that would please my eye. Of course there are dozens more, and maybe a horizontal crop would even be better, but a man's got to sell coasters doesn't he? 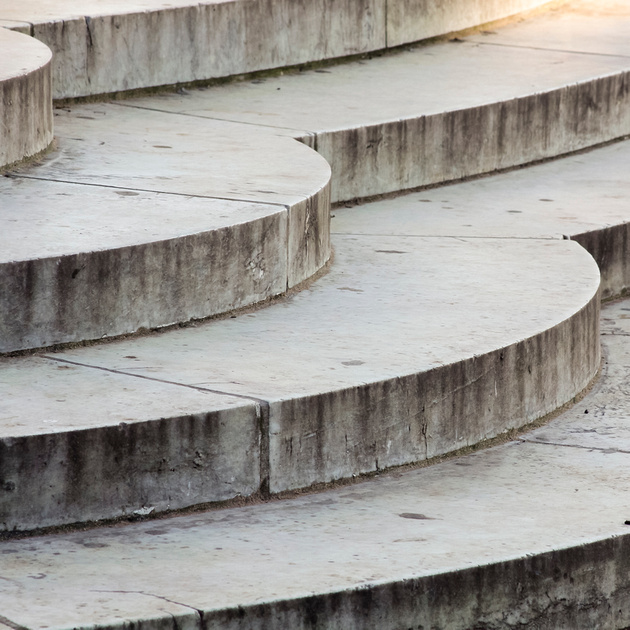 The levels are now foreshortened, the blue cast has been eliminated, and sharpening has brought out the textures and solidity of the steps. They are beautiful, but you certainly wouldn't want to take a tumble if you don't watch your step, so to speak. 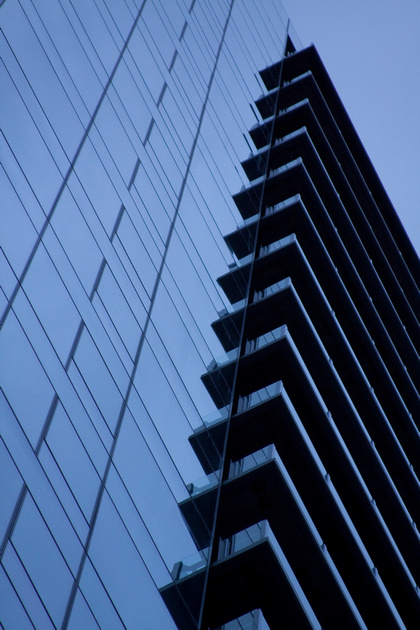 On to facade graphics. I was intrigued by the overwhelming repetitive nature of these balconies climbing up the exterior of a Pearl District condo tower, complete with a perfect reflection in the mirror glass that only added to the graphic nature of the image. Upon investigation, the overall blue tint was actually not really out of line with the actual light of that afternoon. Mirror glass will reflect a rare blue sky, after all. As a retired architect, I don't usually enjoy tilted buildings, but in this case I thought it useful to emphasize the height of the tower by getting the most I could get with my standard lens. Portland towers suffer from our urban design codes in that they most often resemble the base of the skyscrapers we are used to in other larger cities - they just aren't tall enough, especially for a New Yorker. 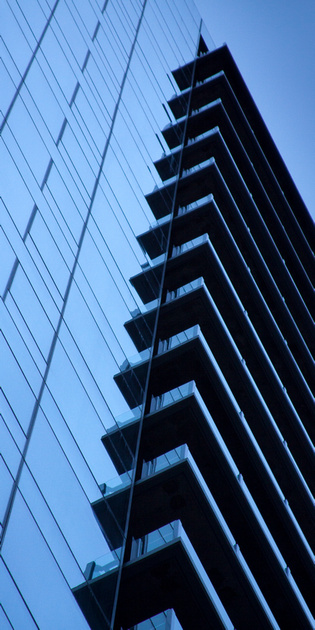 Your framing can certainly emphasize the image's proportions, so I converted the conventional vertical frame into a 2:1 vertical panorama to further heighten the visual experience. Sharpening and increasing the contrast brought out the divisions in the glass curtain wall and darkened these lines to continue the repetitive dance across the entire facade beyond the balconies. I finally slightly lightened the overall exposure and lowered the exposure of the triangular piece of blue sky to further define the building's lines. 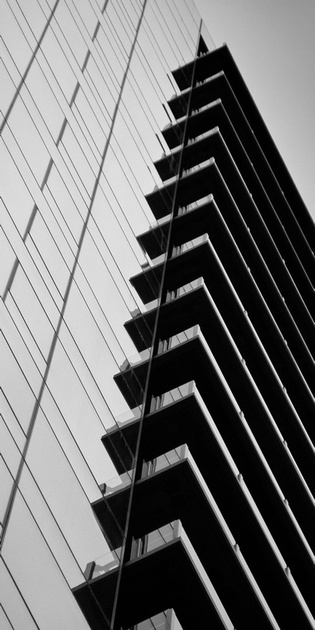 You want graphics, I'll give you graphics! By eliminating the blue, the black and white version further emphasizes the lines and sun/shadow interface that is now the entire image. I don't know which version is my favorite, but it is interesting that the black and white version finally allows the viewer to really see that balconies don't bite into the building - the "column" holding them up is actually another mullion in the curtain wall. 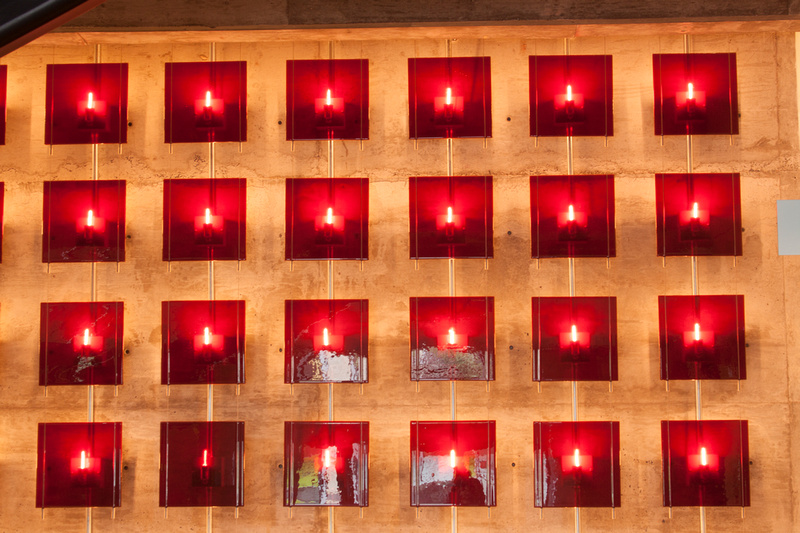 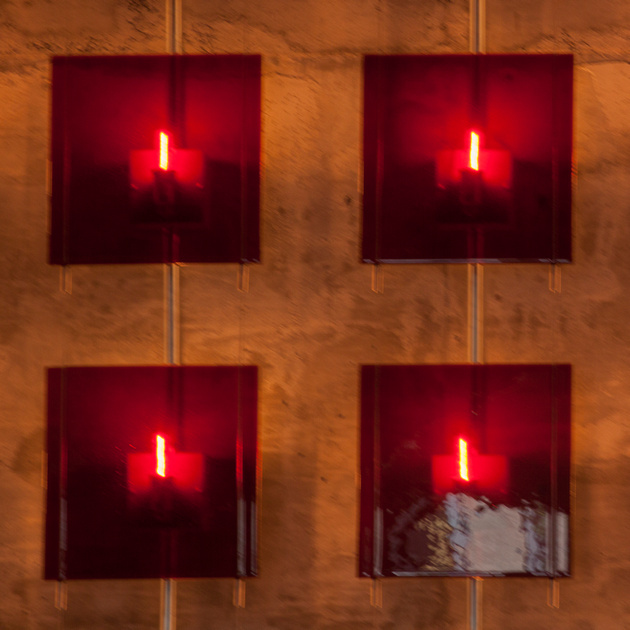 These next two images show that you as the artist get to control the repetition even when another artist has set it up for you. This first photo is of an art installation in the lobby of Portland's Gerding Theater. The red glass squares set into the stone wall, with their lamps mimicking candles, are certainly striking and repetitive. But I get to show the extent of the pattern that I like, so the reality of 63 or so squares is first reduced to six and finally to four, because four squares fit the square coaster. You decide if I've gone too far. 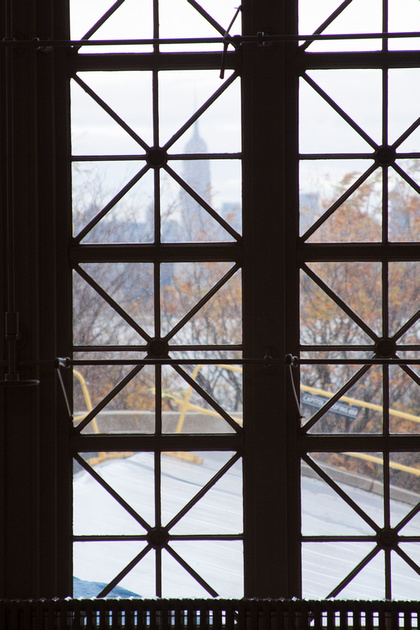 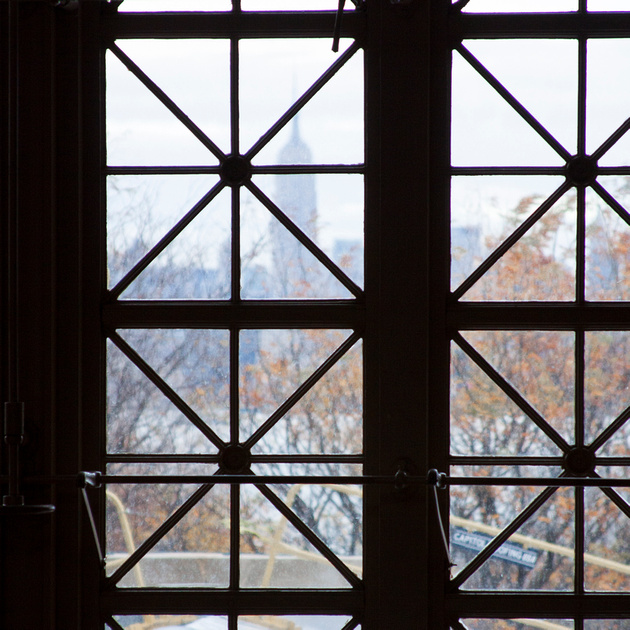 These are two versions of the same image. The original snapshot of the windows at the Grand Hall at Ellis Island attracted me because I love patterns and the silhouettes I can make through exposure modifications to emphasize those patterns. The final result increased the contrast to emphasize the repetitive frames of the beautiful windows. The square crop also eliminated the reality of the badly proportioned square fragments at the edge, along with the vintage radiator in front of the windows. I subtly did some work on the exterior view to heighten the fall foliage, downplay the yellow railing, and allow the viewer to be more aware of the Empire State Building beyond. 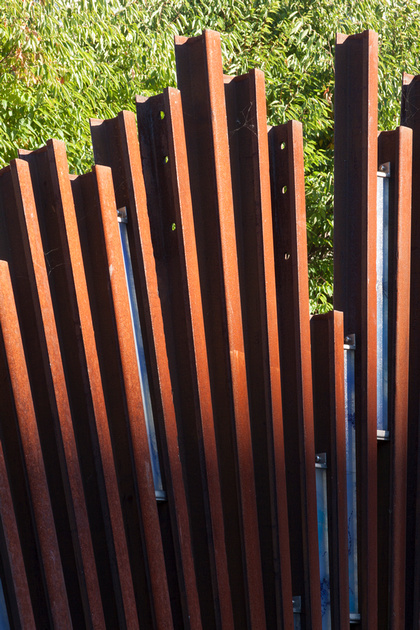 We will end this essay on repetition by showing another segment of an artistic repetition that I can make my own. Just because another artist has provided me with a work of art doesn't mean that I can't interpret it in my art. This railroad rail sculpture in Portland's Pearl District snakes along the edge of an entire city block, and is meant to hearken back to the neighborhood's former existence as a giant rail yard. This snapshot shows just a tiny portion of the sculpture in the afternoon sun. I carefully framed the scene to use the trees as a background to screen the buildings beyond the park. But when I viewed the photograph last week, five years after capture, I was dissatisfied with the deep shadows obscuring the bottom of the frame. I will now show two ways to eliminate those shadows, and you can decide which one is more successful - based on the idea of emphasizing the repetitive quality of the sculpture that originally caused me to press the shutter button. 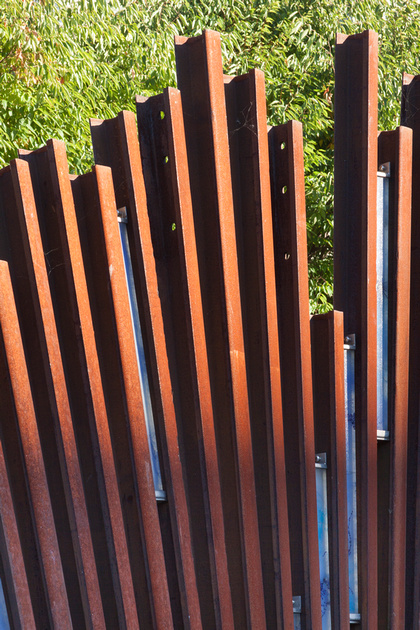 I raised the shadows in a realistic fashion in the bottom third of the frame to eliminate the shadow's distraction from the subject at hand, the repetitive railroad rails, and it certainly helps. 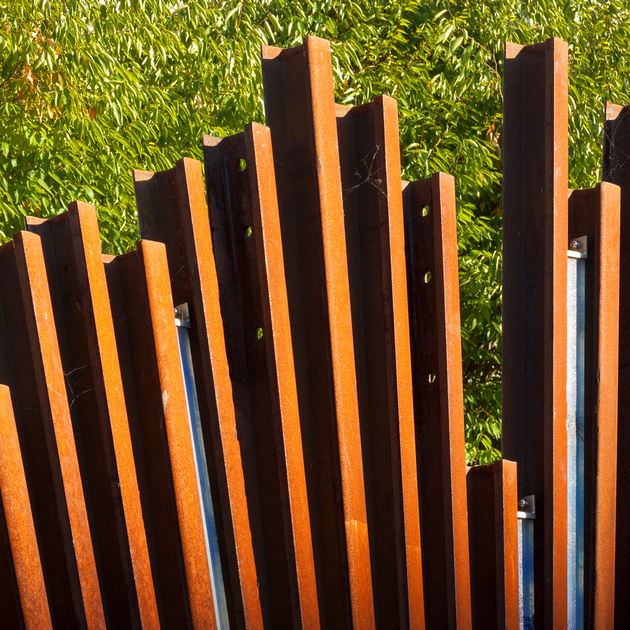 But what if I eliminate the shadow by just cropping it out? I am not sure which way is the answer. While the rails' height and proportions are certainly diminished by the square crop, in a funny way their repetitive nature is emphasized by what is now a more horizontal sequence across the square frame. I'm still debating this, and you can certainly disagree with me without being wrong.

Without repeating myself, I hope that you have enjoyed this discussion of repetition in photographic composition and try to integrate it into your own photographic journey. Repeat after Me!