I'm often asked what kind of photography is my main focus, and over the years I have struggled with this question. The problem is complex; I would like my images to speak for themselves, despite my zeal about writing about my process in creating them. Attempts at characterization run the risk of artistic pretension combined with the feeling that my specialty is unusual enough to just lead to confusion - and that my real specialty is a niche in that already narrow focus. So I will give it another try. I am an urban photographer, in that most of my images are set in urban spaces. I am an urban landscape photographer, since my imagery is certainly in the landscape tradition, minus the beauty of the natural landscape. Since most of my imagery is not in the grand landscape mode, I would then characterize it as intimate urban landscapes and start on the road to descriptive confusion. My photos are certainly not in the "street" tradition, in that the scenes usually do not contain urban inhabitants - but I am beginning to be annoyed at the "no people" designation in one of the photo-sharing websites I contribute to, since I suspect that they think I do not have any friends. And while my photos contain buildings, I wouldn't really describe myself as an architectural photographer since I'm not usually trying to present a "hero shot" of a piece of architecture. The buildings are important in their role in the drama of the city as a whole.

Now that I've confused the issue, I would like to show a half-dozen examples to attempt to clarify my pursuit. They come from Portland, London, and New York, but they really are about the urban condition as a whole. They were taken during the last fifteen years, and there are no people in them (!). 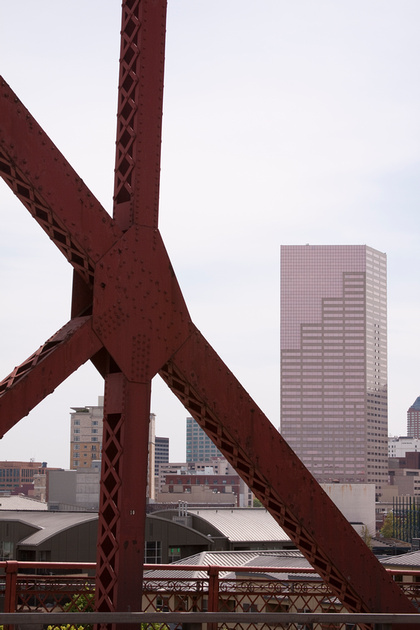 This first snapshot was taken on a walk across the Broadway Bridge in Portland. I was interested in the juxtaposition of turn of the century pragmatic engineering with a heroic glass monolith that the bridge's designers couldn't fathom or even anticipate when they built the bridge. "Big Pink" is an icon in Portland, since it is one of our few real towers, standing apart in the skyline, and for God's sake it is pink. I could probably call this "Big Pink #10" and not be far off the mark. So if I am going to take yet another portrait of Big Pink I try to make it a little unusual.

While I said that the bridge structure was pragmatic, it's celebration of the art of the truss verges on the romantic. The joints, like this asymmetrical one involving five girders and wonderful collection of rivets, are almost poetic. When later City Fathers decided to paint the bridge red it only increased the drama.

The final image tries to do a few things. I've lightened the exposure to show off the bridge. I subtly cropped the composition to get rid of the annoying portion of the Koin Tower at the right edge, and to reduce the visual clutter of all those rails on the bridge. Lightroom allowed me to increase the saturation of the blue portions of the sky that were not even there in the original snapshot. Finally, I played with perspective correction tools to try to straighten both Big Pink and the vertical parts of the bridge truss, all to mostly no avail. The camera reveals that the bridge is not really square with the ground, so that this anal architect can have a straight Big Pink, or a straight bridge, but not both. 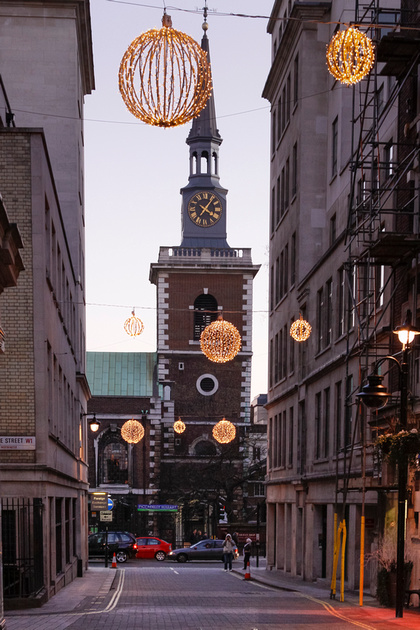 On to London. I think this scene is on a side street somewhere in the West End, but that is not really important. You would have to be a London Cabbie to convince me that you were certain of the exact location, but it contains enough details -the partial street sign, the stone and brick palate, and the typical church tower in the distance - to say "London." My frame of reference is those two yellow lines near the curb, which denotes the bike lane where I was allowed to ride on the street in 1976. This is Xmas 2008, and despite the lights, the mood was pretty grim. 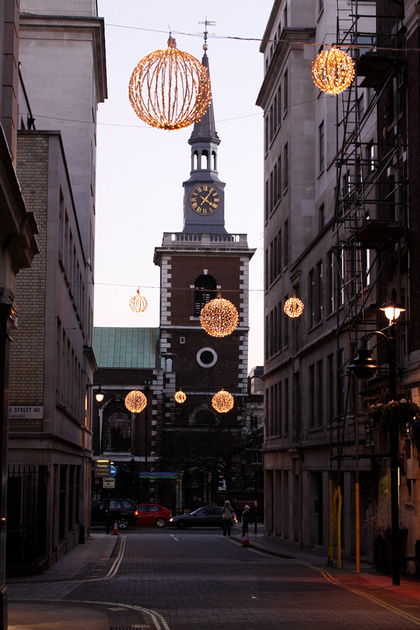 Not as grim as the original exposure, which was probably more realistic considering it's a little past four in December. But I tried to lighten the dark shadows in the street to reveal details and in fact also reveal a little bit of the street lighting and the facades of the buildings forming this lane. Once again I tried to straighten up those buildings and the church tower, which necessitated some more cropping of the foreground. 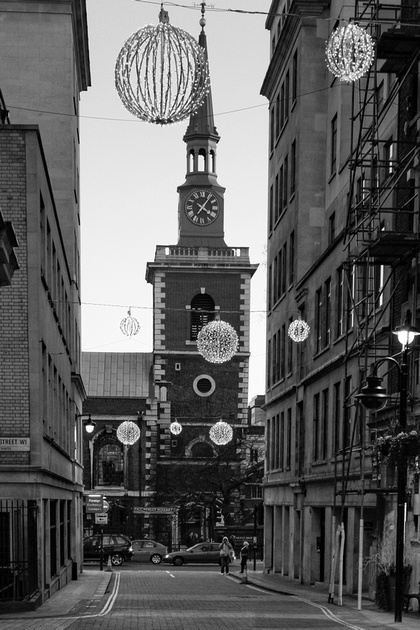 Somehow this black and white version seems to capture the mood better, even though it reduces the festivities. To each his own. 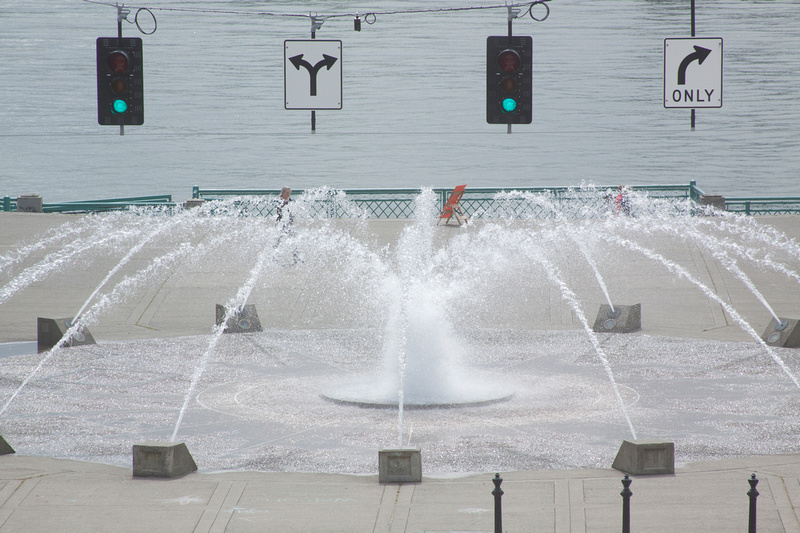 This snapshot of the Salmon Springs Fountain proves two things - I can take a photo through the windshield while waiting for the light (it's Portland so probably no one blew their horn when I failed to anticipate the green light) and that I can take a photo with a person in it, even if she is obscured by the fountain. Obviously this impromtu shot needs a lot of work, unless you're partial to street signs. 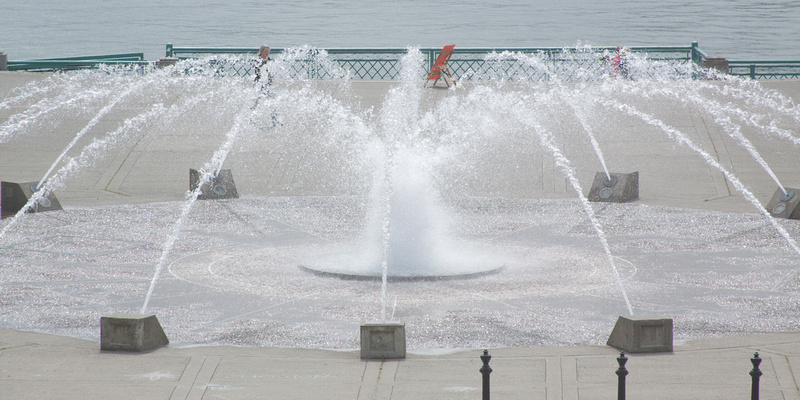 The panoramic crop focuses our attention on the fountain and emphasizes its width.  I can live with the red chair, but those posts have just got to go. 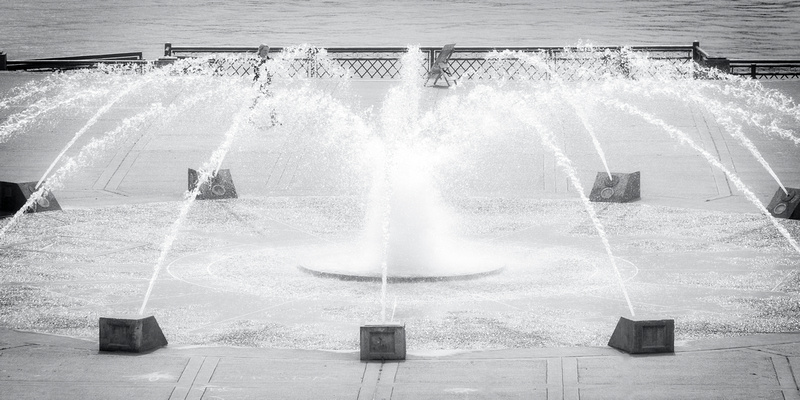 While we're at it, let's get rid of the red chair too. Converting to black and white eliminates the red chair, while the "perfect eraser" removes those posts without any fuss. And its not like their was a whole lot of color in the shot in the first place. 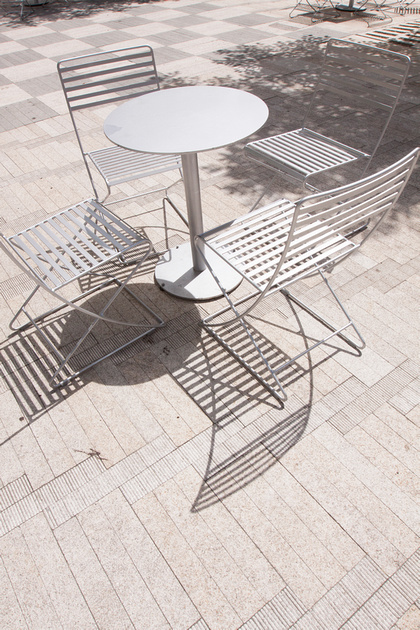 A study in light, shadows, and pattern in an urban park. I can't go back and give the chairs more room, but I can "clean up the area" in such a minimalist composition. And straighten that leaning table post! 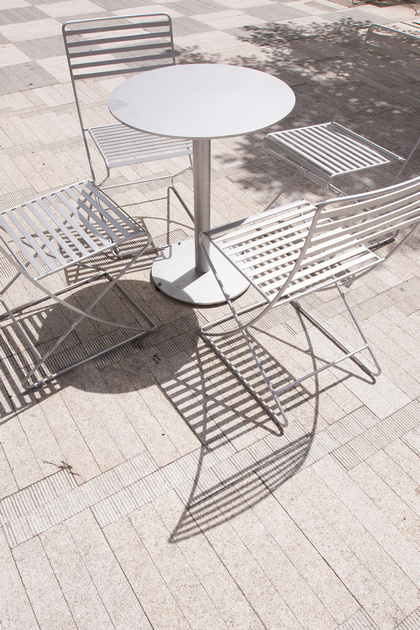 CROPPED AND STRAIGHTENED TABLE AND CHAIRS

I straightened the table and cropped out the mess at the top edge of the photo. When I converted to black and white instead of tan and white, I also got rid of as much litter and gunk as I could - you've got to tidy up! 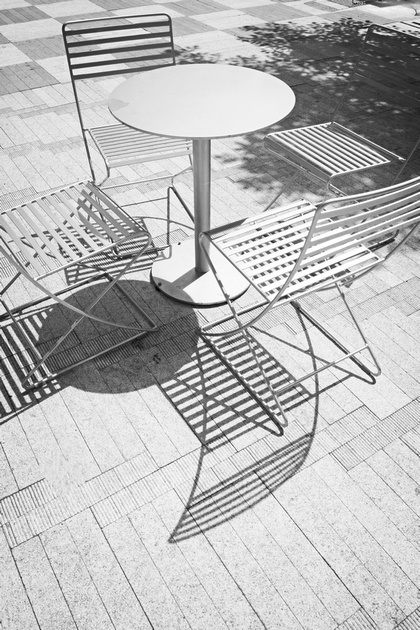 TIDIED UP BLACK AND WHITE VERSION 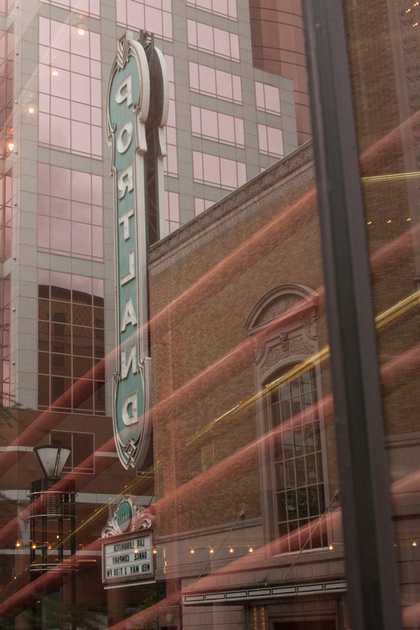 Another Portland Icon, the Portland sign at the Performing Arts Center. I was intrigued by this natural double exposure which combines a mirror image reflection in the staircase glass of the street scene beyond with a reflection of the staircase itself. Or something like that. Once again, this intriguing image needed just a little less wonk. 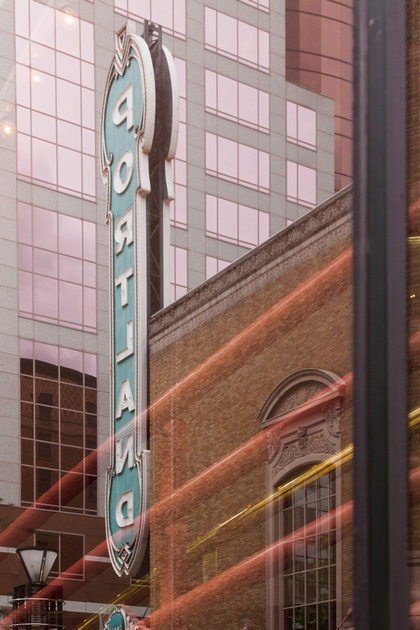 Okay, now we are under control, even if we still don't know what is actually going on. A little selective saturation of the aqua sign and the red railings helps things along. Even if I specialize in the "intimate urban landscape", it doesn't mean that I can't approach the surreal. 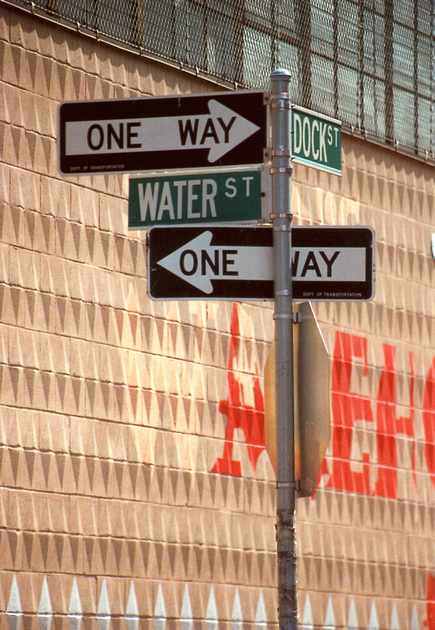 Sometimes you are just walking along, minding your own business, and the absurdity of urban life smacks you in the face. Which way is one way? Even though Water Street and Dock Street might be perpendicular, how can Dock Street run past Water Street? It is now up to me to not only make you laugh, but to make sure that nothing distracts from the joke. 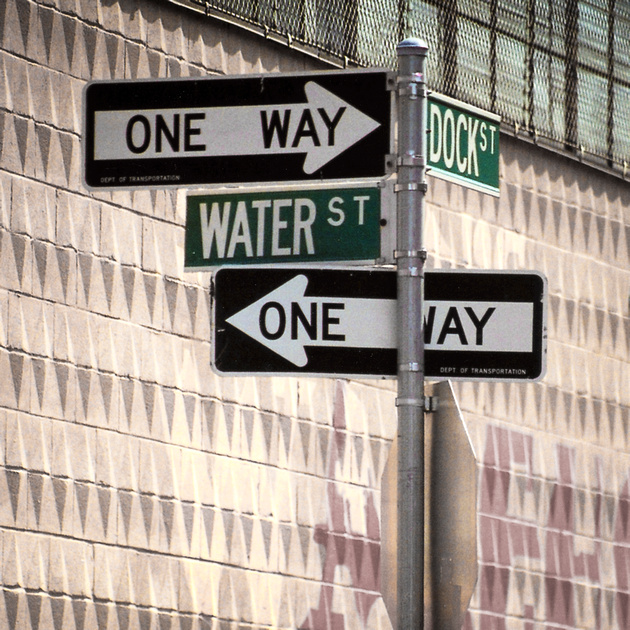 Time for a coaster. Heighten the contrast on the sign, eliminate most of the lower portion of the image, and most importantly strongly reduce the saturation of the distracting red sign. Even though the wall wasn't red, it also was rendered down to almost nothing when we blunted the sign. Now there is nothing left to look at except the rather confusing directional aids at the intersection.

I hope you have enjoyed these urban explorations. Get out and take a walk, and bring your camera.