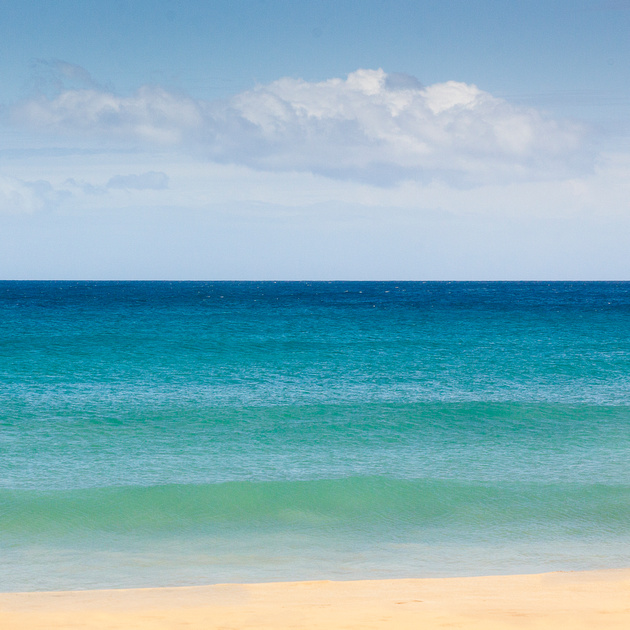 Since Fran and I did not get to travel to Hawaii this year, I thought I would take you all on a virtual vacation that I took this week through the archival files of our three trips to the Islands since 2015. I hope in doing so that I can encourage you to also take a virtual return trip to some vacation spot - you will enjoy some memories and I believe that you will find some images that you formerly overlooked. I frequently find that my initial edit of images from past trips has been a little too severe - there were a number of images, especially after some post-processing, that deserved another look. 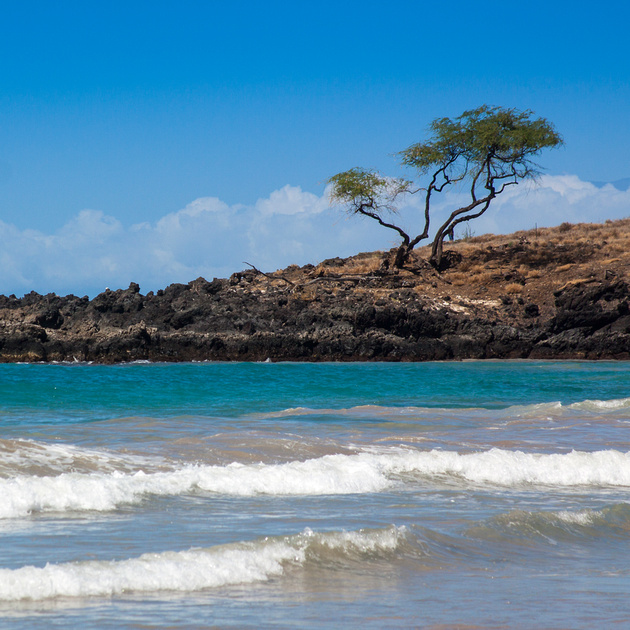 At one point in January I think at least half a dozen people we knew were traveling in Hawaii,and that doesn't even include our friend Miriam who moved there a few years ago. But when I found a few hundred photos that I had "lost" in my frequent explorations of what I call "The Missing" in my archives, I went on my own virtual trip, where I rediscovered some worthy images. 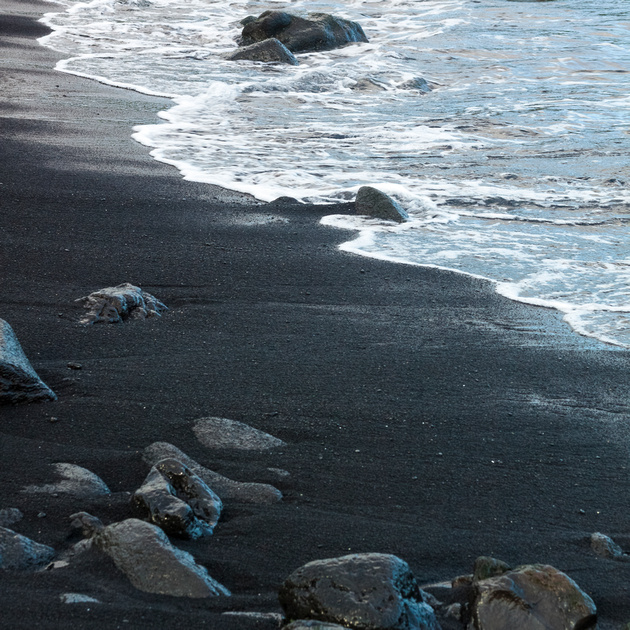 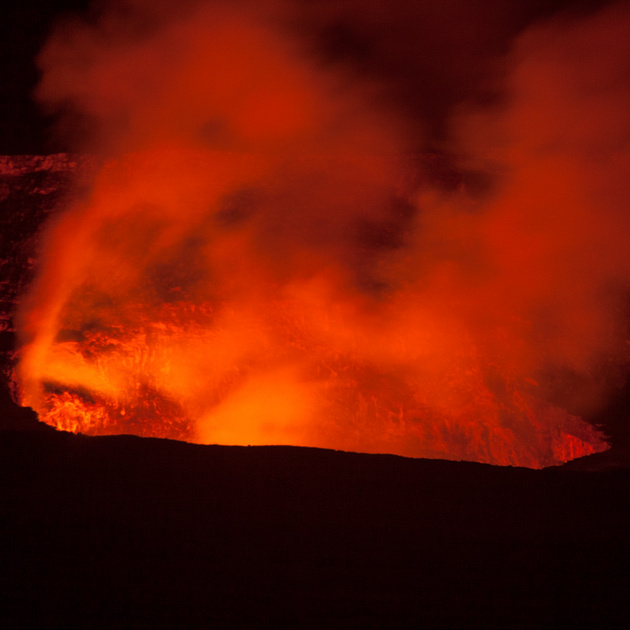 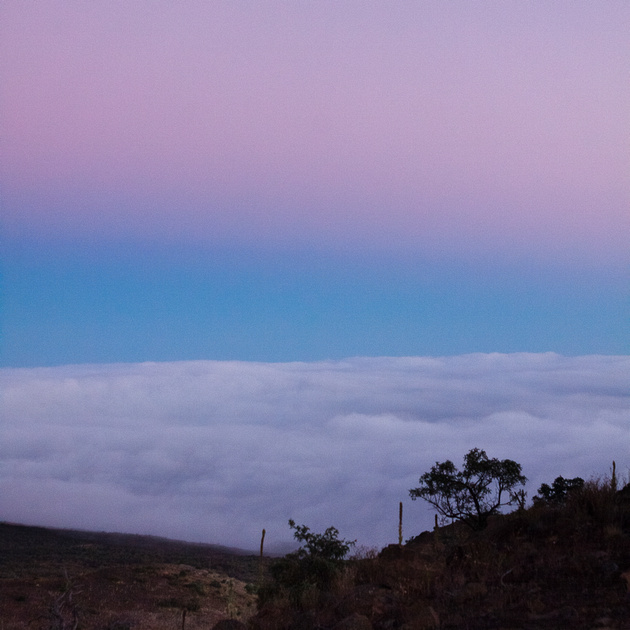 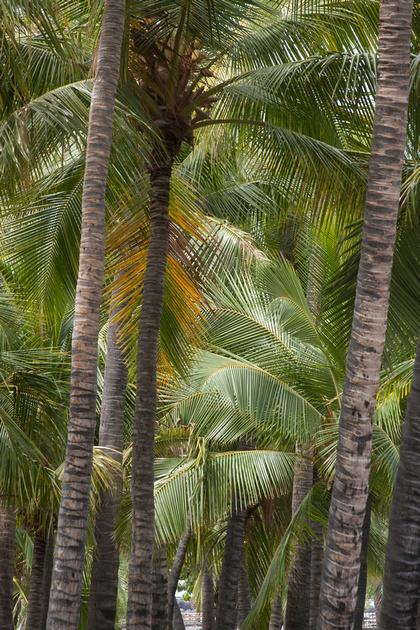 These first six images already were part of my Hawaiian portfolio. It's not that I want to replace any of them, but that I found some more images that I had overlooked. Sometimes an image only reveals itself years after a trip. 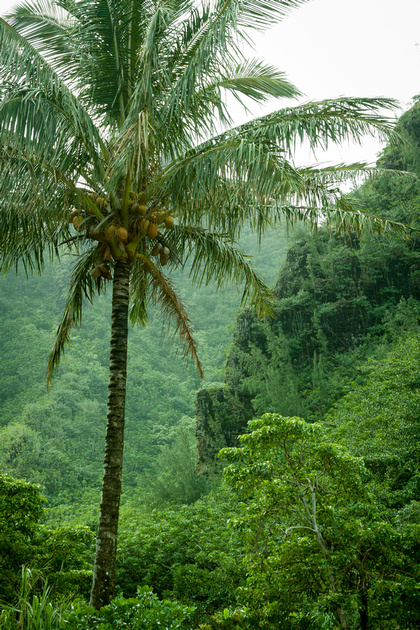 Upon reflection, this image seemed to exemplify Kauai as much as my seaside image, Kauai Blue. Just like that image, the colors were not enhanced, and in fact I almost de-saturated them since they seemed unnatural in their natural state. In this image, the correct white balance actually increased the intensity of the green forest - my camera had initially felt that no forest could actually be that green. In Kauai I often got the feeling that no matter how wild a place Fran and I got to, the surrounding vista had rarely seen a human at all. 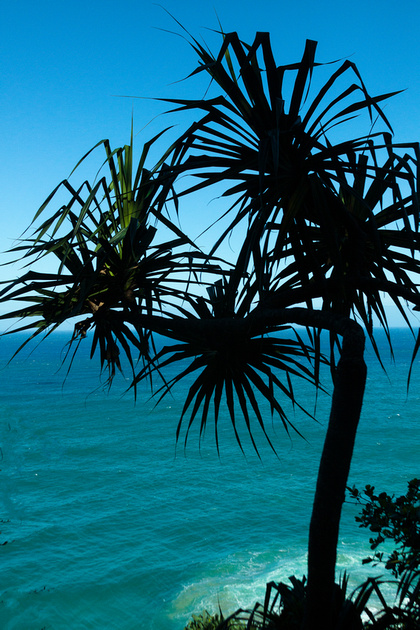 This image immediatly jumped out at me when I looked through my archives, because I love a good silhouette much more than the next guy. This tree on a cliff looking down from the Napali Coast Trail seemed to symbolize the Island's unusual vegetation. My post-processing efforts improved the image in my humble opinion, by deepening the blacks to emphasize the silhouette, and by eliminating some vegetative "distractions" on the left side of the image. 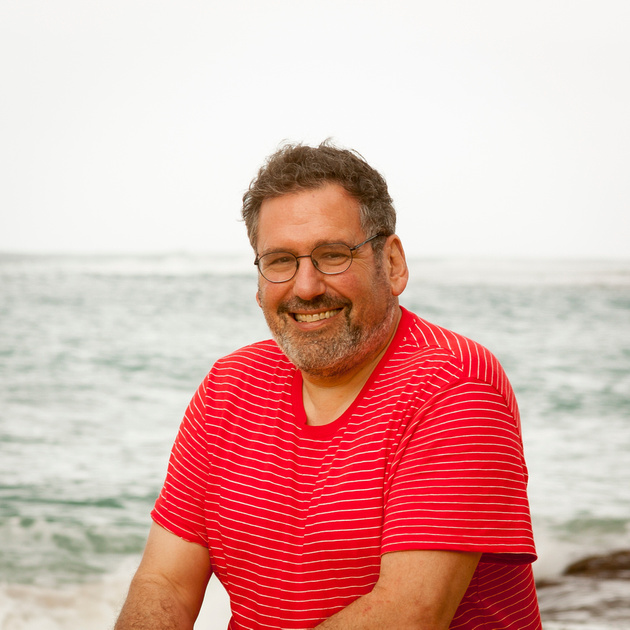 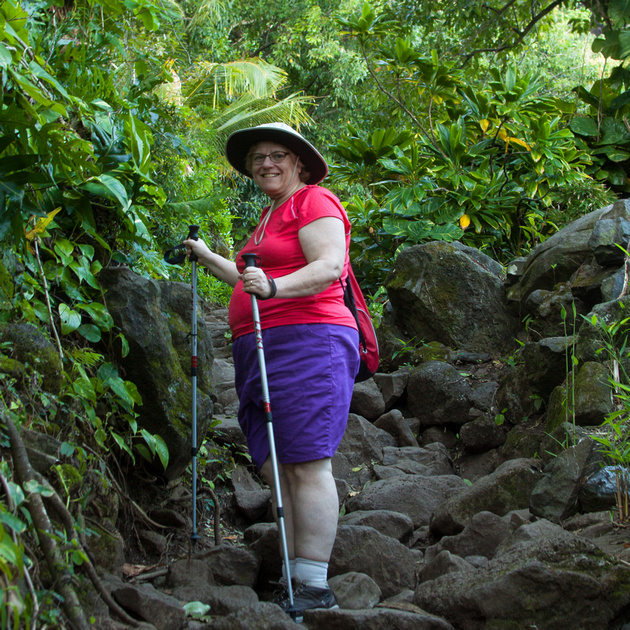 The two participants in our travels. This was just the start of the trail, before the right side dissolved into a drop of hundreds of feet to the sea. Fran was smart enough to bring her walking sticks, while I was smart enough to insist that she did not have speed up or leave the comfort of the uphill cliff face so that young whippersnappers could pass us on the trail. 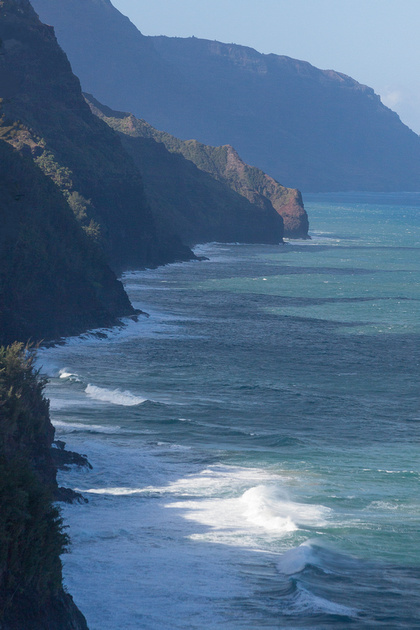 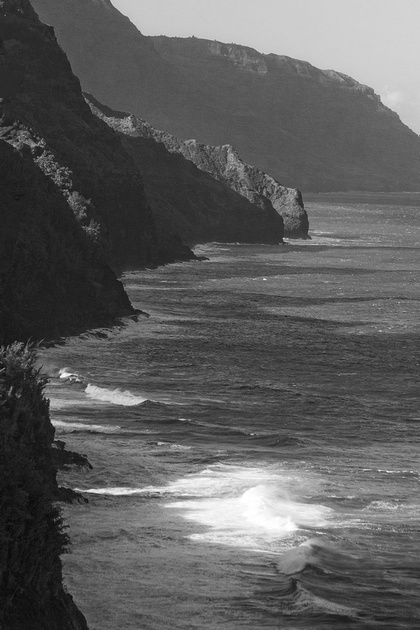 One of the best hikes in the United States. This was our turn-around-point, about a half-mile in on an initial dozen-mile leg of the trail. It was more than enough, since it's mostly downhill from here, there's nowhere to stay, and once you get to the very dangerous beach down there, you must hike back a dozen miles uphill. I heartily recommend this hike, as long as it hasn't rained for a few days before you head out; recent rain would make it very dangerous. Color or black and white is a matter of taste. 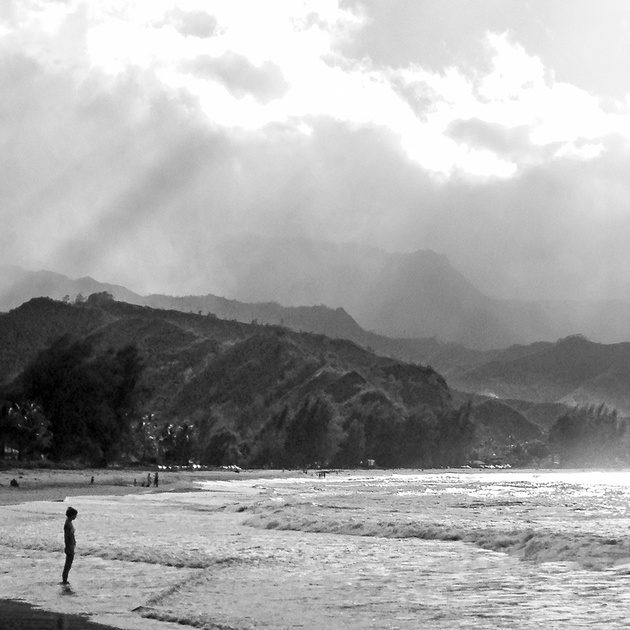 LATE AFTERNOON IN HANALEI : FINAL ON ONE B&W VERSION

In this case I thought that the monochrome version was much more dramatic, emphasized the silhouette, and elevated the image above the typical postcard. Hawaiian skies are more interesting than the clear blue skies of the stereotype. 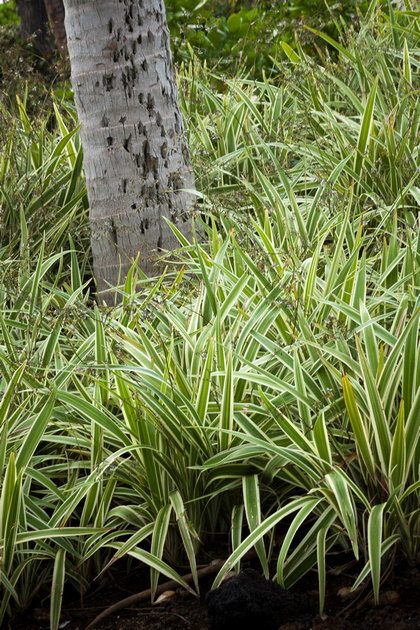 One of the things I love about Hawaii is that scenes you might think only a gardener could create are just natural occurrences along the trail. Sometimes it seems that it is harder to kill something than to grow it. 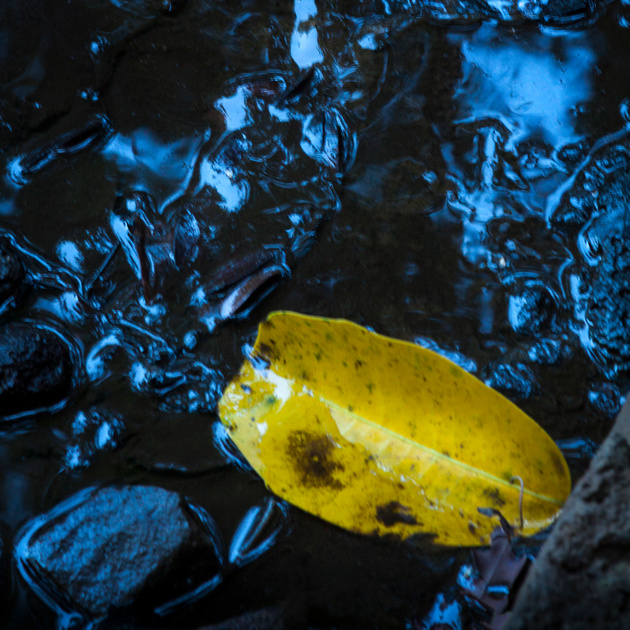 Just because I'm in Hawaii doesn't mean I have to ignore details that while they don't scream "Hawaii" do demand my attention. 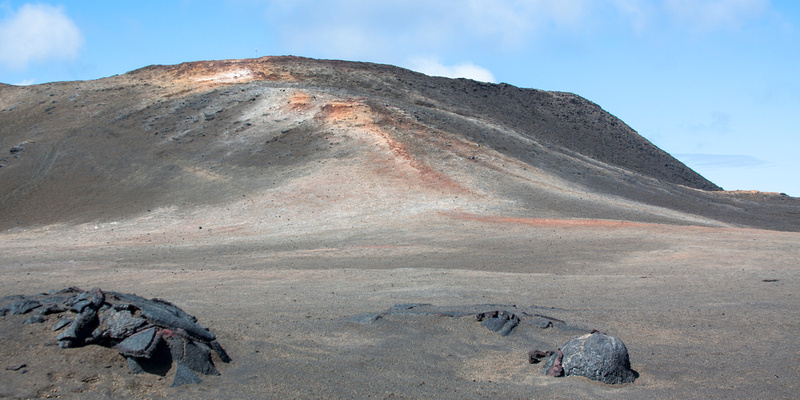 While I tried to create even larger panoramas of the latest lava field after our last trip to the Big Island in 2018, this small detail seemed to exemplify the destruction of a suburban subdivision more than my larger efforts. When I returned to my archives, I was even more impressed by this less "arty" shot. By the way, my horizon is not slanted, because my friends, the humans added for scale, are standing up straight. 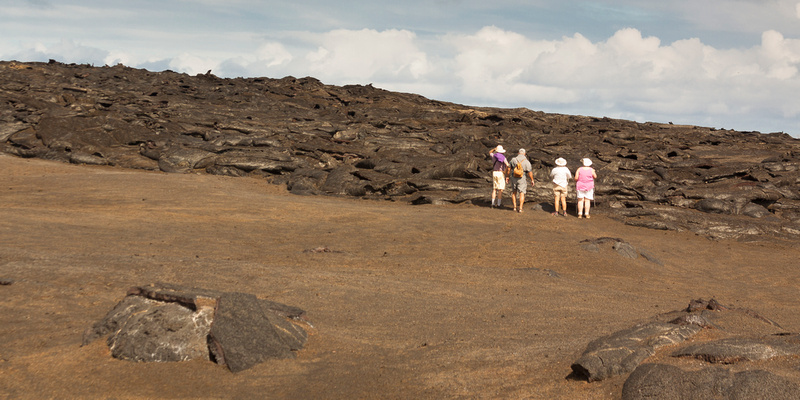 This lava flow to the ocean was about half a mile wide and seven miles long.

I thought I would end this essay with another image that seems to yell "Hawaii" without attaching itself to any particular spot in the islands. I don't even remember where it was taken, but I sure was having a great time.