This week I would like to describe the process by which I "work a subject" by concentrating on seven different versions of one subject. Working a subject is even more exciting when that subject is completely unexpected, a surprise on a photographic jaunt that delivers something beyond the ordinary. Such an experience was part of an exploration of a garden center that I described in last week's blog. I anticipated a flower portrait session, and suddenly encountered an architectural abstract that falls into my wheelhouse. I was pleasantly surprised, and the following variations show how I tried to respond. By the way, if you do not share my enthusiasm for this image I fully understand. What piques my interest does not necessarily float your boat. It is my job to convert my initial "wow" into your "wow", and failure on my part might reflect on my photographic skills without in any way dismissing my initial interest. In any case, these images might inspire you to try different things when you encounter a subject that grabs you. 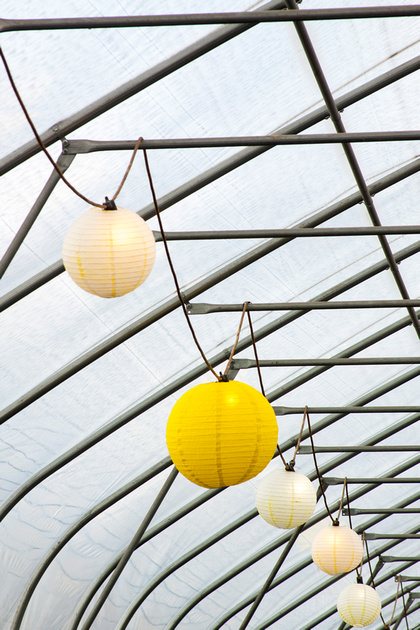 I walked through a door into a tent structure that was designated as "Hoop House #1", and while it's not the Pantheon, this arched shed for shade plants lifted my spirits. I guess the architect in me was excited by how such a utilitarian structure had achieved some poetry. The lightness of the structure, the way the fabric controlled glare without cutting off most of the light, and the unexpected size of the interior told me that I had found something special, at least for me. I might be wrong, but I think the tent is about 50' wide by 150' long. Did I mention that  am a sucker for Japanese lanterns? Needless to say, I didn't spend much time looking at flowers for the next few minutes.

These photos were all post-processed and cropped, and "corrected", but I think they reflect the strategies around each initial attempt to respond to the subject. The first one above shows my fascination with the lone yellow lantern in the midst of the other lanterns marching down the tent. I cropped the image, but was uncomfortable with how close the last lantern was to the bottom edge. 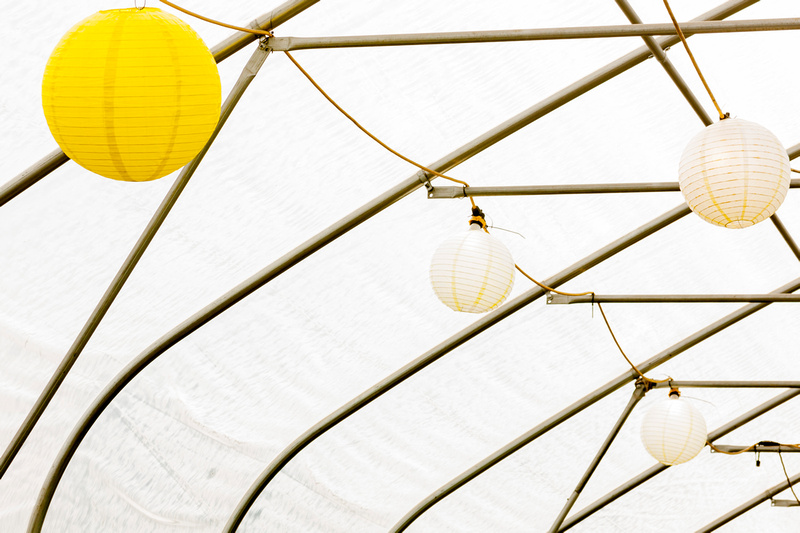 I tried a horizontal orientation, somewhat unusual for me, to place the yellow lantern at the head of the line. I will say that I was concentrating on the ceiling because I do not have a wide angle lens, and more importantly, I didn't want to include any messiness, commercial signs, or even the plants that would clutter my vision. You might have reacted differently. 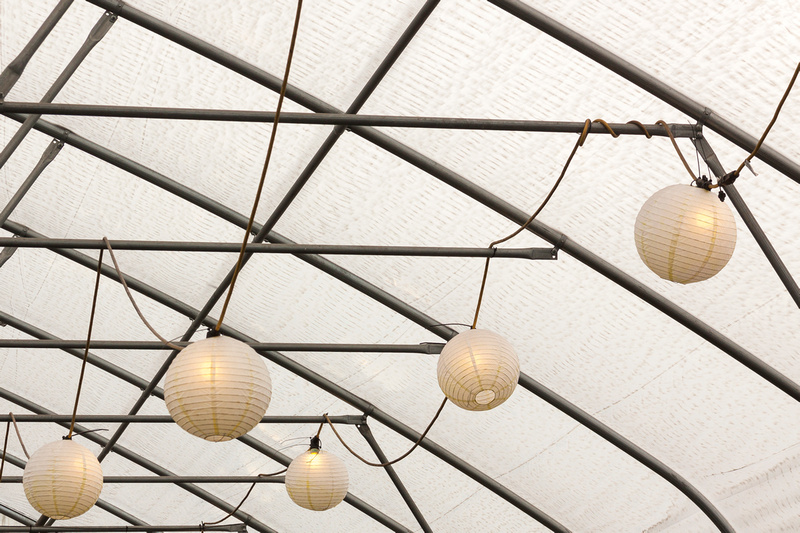 What if I left out the yellow lantern? Was it a distraction in the line of lanterns, or a highlight? This next shot tried to answer that question, and I found five lanterns, all lit, to run through the frame. I will tell you that a problem with all my shots was trying to determine the "proper" angle to achieve the illusion of a straight horizon with so many horizontal supports running through the frame - it usually involved a compromise that involved either leaving out or highlighting the level of the frame member closest to the edge of the frame. 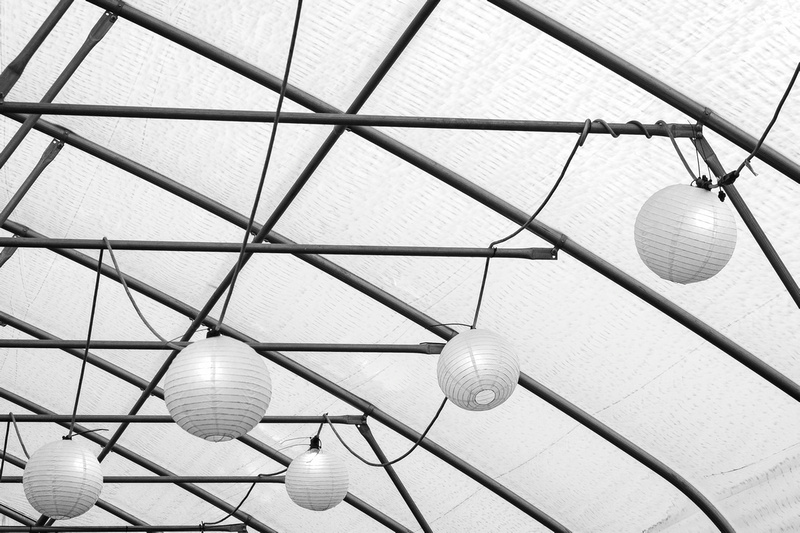 Once I left out the yellow lantern I naturally tried a black and white conversion. This seems more "pure" to me than the color version, and as usual brings out the details in parts of the image like the lanterns and the tent that might be overlooked in the color version. By the way, I never got the yellow lantern to look any good in black and white - it only looked discolored and dirty. 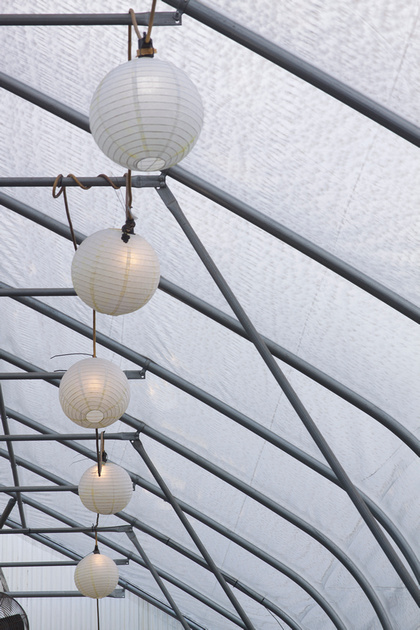 RIGHT SIDE VERTICAL, HOLD THE YELLOW 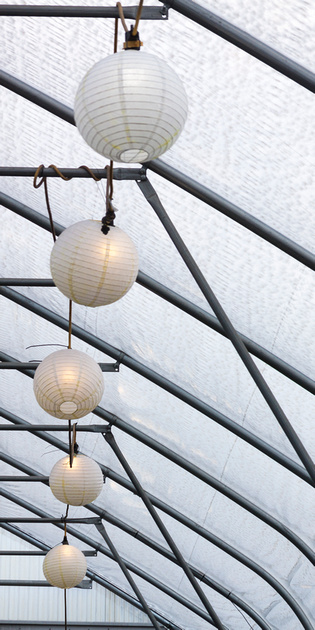 My solution as usual was to crop even tighter and go to an even more vertical 1:2 aspect ratio, reminiscent of Japanese screens. I no longer find the inclusion of the gable a problem - only architects would probably notice. 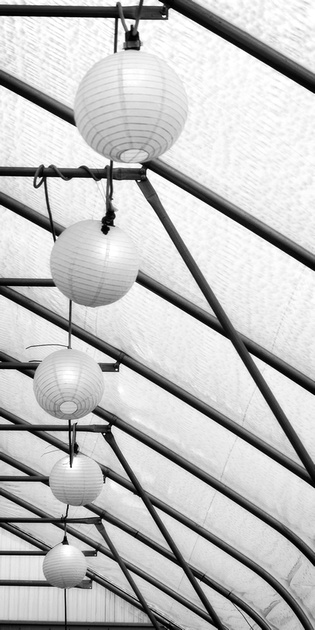 I immediately went to black and white. The image is even more clearly about the lines and lanterns, and somehow the lead lantern seems a little brighter.  What is funny is that I don't really appreciate extra detail in the tent surfaces, which seems too busy, and the gables vertical lines are more intrusive too. And what's that ridiculous cable coming off the third lantern? It's there in the color version, but here it really is a distraction, so it will be gone when I open up this version again.

I returned to my original spot in the tent. When in doubt, I always try the square orientation. 16,000 coasters can't be that wrong. I let the yellow lantern lead the way, and trusted the receding horizontal supports would lead the viewers' eyes even though I only included three lanterns. I am under no illusions that this would make a popular coaster - you can lead a horse to water, but you can't make it drink. 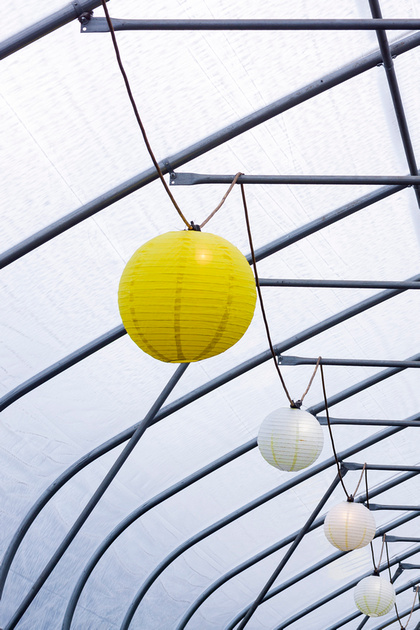 Although I liked the square, I went back to the vertical to get more depth in the image. I adjusted the photo in post processing to get the most clearance I could for the last lantern, mostly by letting the horizontals go wonky by emphasizing the first level horizontal support.

This is my favorite, but that's just me. I would love your opinions. What is the best part about this unexpected photographic find is that it is about fifteen minutes from my house, so there is always the opportunity for more experimentation.