RESCUED FROM THE ARCHIVES 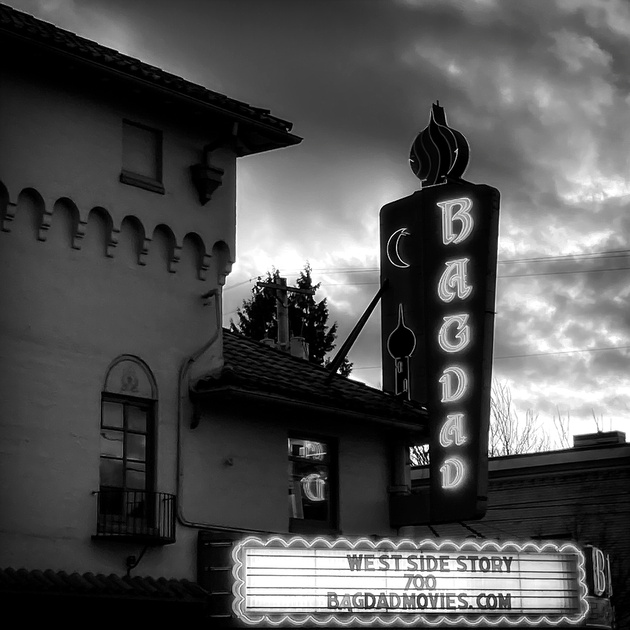 This week I'd like to make another trip into my archives in an effort to encourage you to revisit old photo shoots to see if you missed any gems in your first, or second, or even third go-around through your images. The last time I wrote of this effort, I entitled it "Revisiting Your Archives." But let's get real - this is really a rescue mission. It's not like I'm the only one who fails to see the brilliance of his efforts at first glance - although I would have to admit that my skills, along with my lack of organization both contribute to a supply of images worthy of later attention. After all, we are talking about a man who has a file called "The Missing", which notes images that I can no longer locate. In my efforts to highlight my images on social media, I need a steady supply of new photos which I cannot fulfill with just new photo shoots. Thus my efforts to slowly go through my archives, as disorganized as they might be, to find images I might have missed previously. I'd like to emphasize that these are not "rejects" - in fact some of these images are so good, in my humble opinion, that I now question my editing even more than I used to. 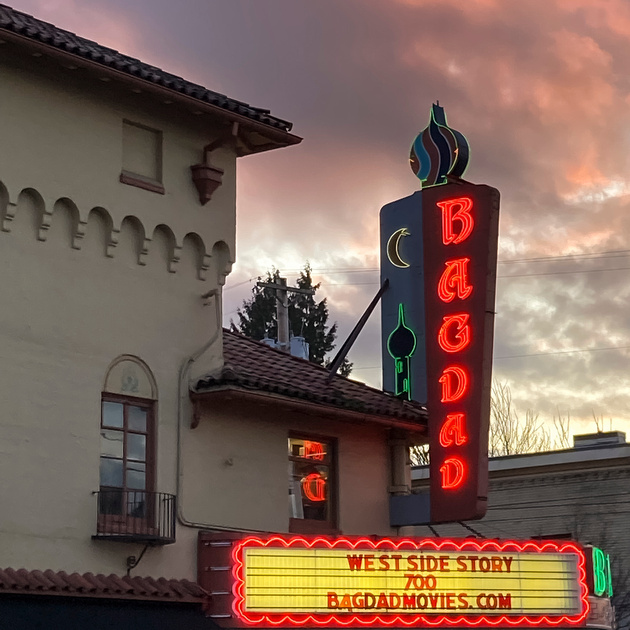 This first pair is probably at least "Bagdad #4", since the theater is such a compelling subject and is only a fifteen minute stroll from my house. This latest effort was a grab shot with my Iphone while waiting for the traffic light to change. I was struck by the clouds and the sunset behind them. My usual tight crop reduced the image to just sky and sign. I do like the pink in the clouds in the color version, but as usual I like the black and white mood better. because it further reduces the information about the small section of the building in favor of the clouds and sign. The only hints that this is not the original West Side Story are that we know the Bagdad was a porno theater back in 1961, and that there was no such thing as dot com 60 years ago. I also like the window reflection  of the marquee in the window, which is more apparent in the color version. 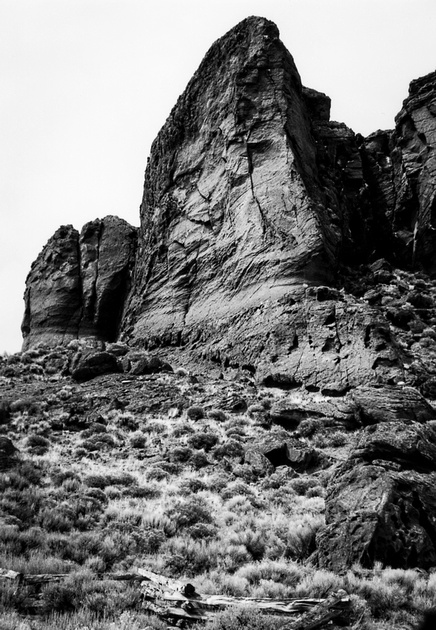 I somehow missed this image of a random monolith in Eastern Oregon when I put together my latest photo book, "Exploring Oregon" and can't for the life of me wonder why. Of course the black and white version is rich in detail, but I like the subtle colors of the color version better anyway. 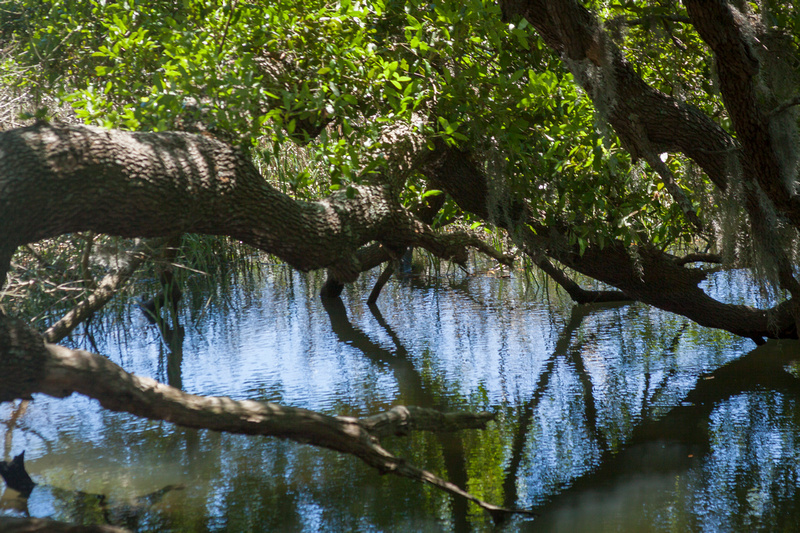 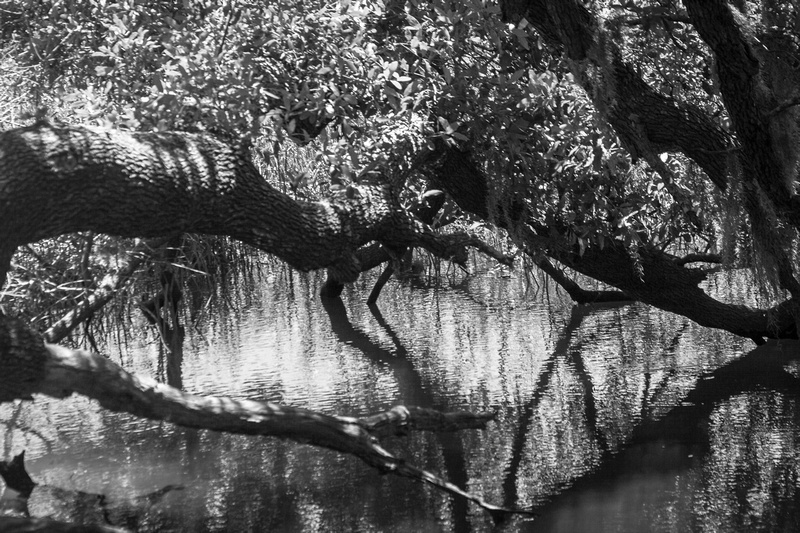 These two studies of overhanging branches on the Cape Fear River come from our recent trip to visit the kids in North Carolina. I don't know why I overlooked it before. While the black and white version as usual contains more detail, I feel the blue of the river achieves more separation and punch in the color version. The panoramic crop helps orient and concentrate the viewer's attention on what I consider important. 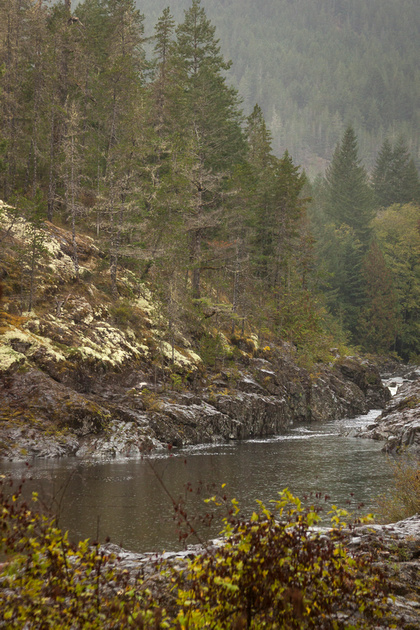 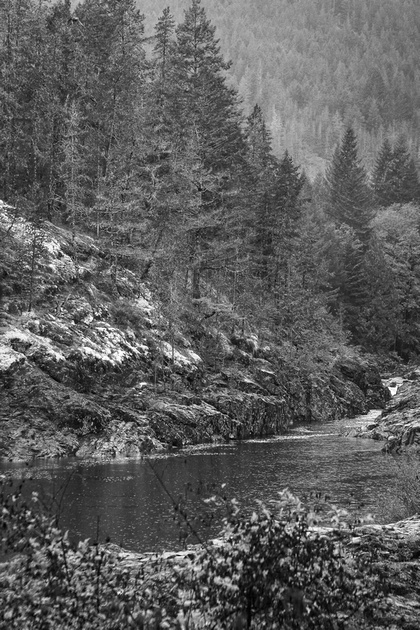 These two versions of a portion of the Sooke Potholes Park on Vancouver Island eluded me on the first edit of these vacation photos. I blame that on the success of a crop of the original image, and mostly on the many different images I took on this hike. Sometimes a lot of images can cause  a photographer to fail to see the positive aspects of an individual photo. I think the color version's subtle colors show off the layers of the landscape better than the black and white. Of course if you want to pretend that the lichen on the hillside is snow, the black and white version is the way to go. 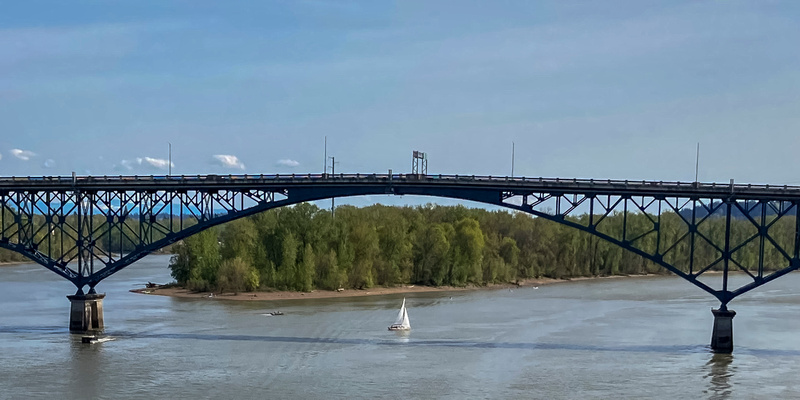 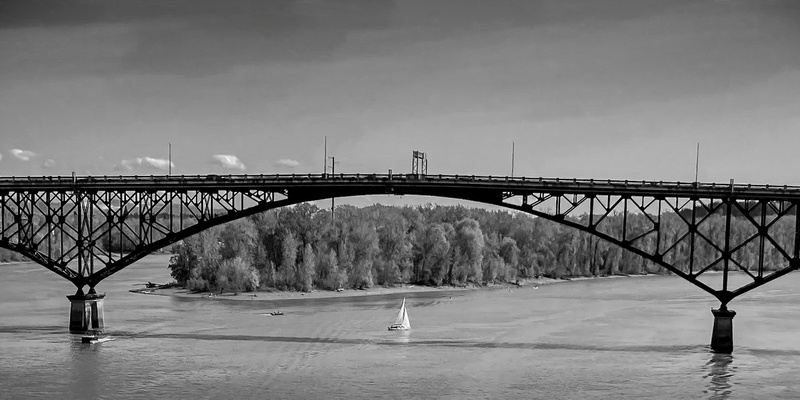 This image is from my foray across the Hawthorne Bridge last month. The Ross Island Bridge to the south caught my attention when I realized I could frame its central arch. The sailboat clinched the deal and I waited a minute or so until it found its rightful place in the composition. The green island trees provided a nice color contrast, but the black and white version really shows off the geometric lines of the bridge structure. In the black and white I can darken the sky and lighten the clouds and sails much more than I can get away with in color. I also think the thin shadow of the bridge is better portrayed in black and white. The panoramic crop emphasized the arch and eliminated a lot of superfluous river and sky. For the life of me I cannot understand how this image, one of the few I have ever taken of this bridge, eluded me when I went through this photo walk. 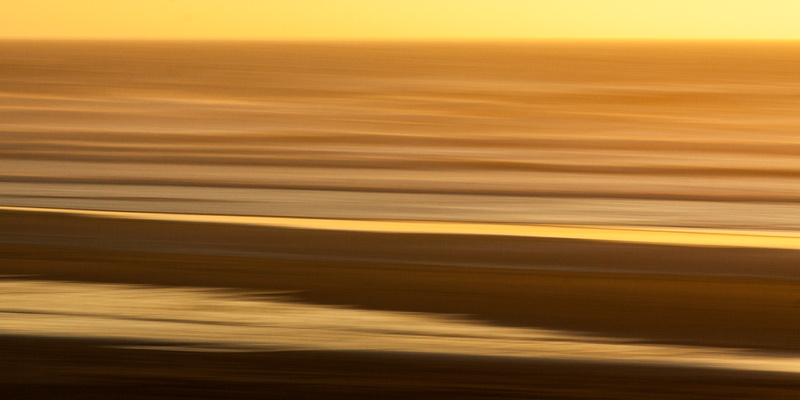 Finally I will show you one of my first experiments in Intentional Camera Movement, where the photographer deliberately moves the camera during exposure. Not one to think out of the box even when I'm thinking out of the box, it took a lot for me to go against my training and allow myself to move the camera. But I had spent the week looking at the same beautiful stretch of North Carolina beach, and was frankly looking for anything to see something different from the condo balcony. I overlooked this image as a failed experiment until I gave it the panoramic crop that it deserved, and actually decreased the saturation of the sunset reflections, especially that yellow sky. I'm now fairly well pleased with this image, although the algorithm's intent to throw every ICM image across my Instagram feed since I posted this image is not appreciated and a little disconcerting. But I am glad I saved all of these images from the obscurity of my neglected archives.