RETURN TO THE BIG ISLAND 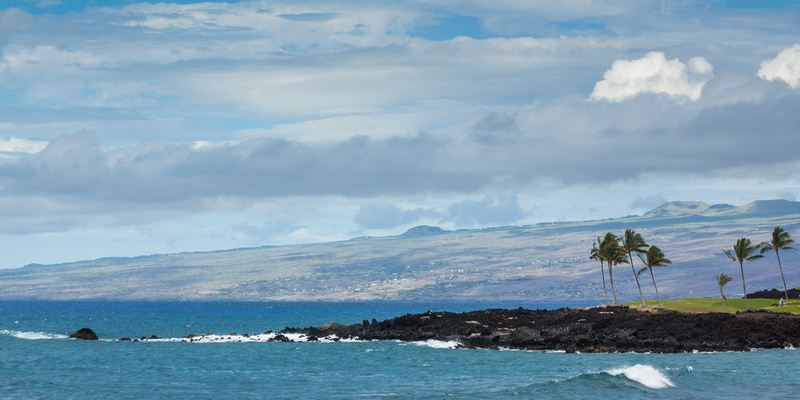 JUST ANOTHER DAY ON THE BIG ISLAND : FINAL VERSION

This week I'd like to return to the Big Island of Hawaii, which Fran and I last visited in February 2019, so we could spend time with our good friends Vinny and Steve. We enjoyed the hospitality of our friend Miriam who had left for Hawaii to live with her partner Greg, where they lives in a jungle subdivision near Hilo. Sitting in my study today, with the temperature hitting 100 degrees, it is a relief to visit pre-Covid paradise through the magic of post-processing some of the images from that trip. 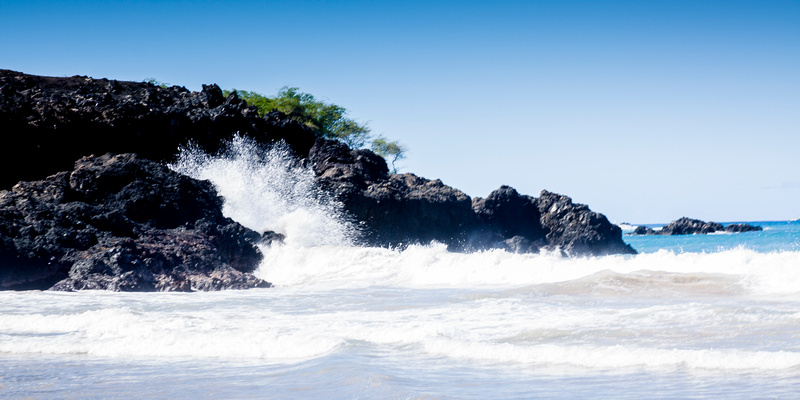 These images were culled from hundreds I took in these two weeks on the Big Island. We first stayed in Miriam's condo on the dry side in Kona, which she rents out and uses as an escape from the rain in Hilo. To say that this place is luxurious is to belabor the obvious, but in fact it is not considered ne plus ultra. This despite the fact that groundskeepers literally spruce up the grounds outside your bedroom before breakfast every day, carefully removing any vegetation that has ceased to behave. Just beyond the grounds are lava-filled deserts featuring unruly palms and distant views of the volcanoes in the center of the island. The place is so isolated from reality that I found only one mailbox in the entire complex when I had the wild idea of mailing a postcard. 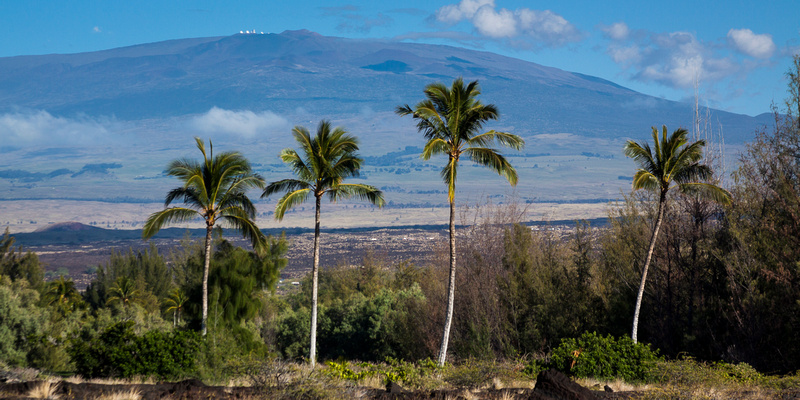 They are not kidding about the dry side. Kona's landscape is basically composed of the ocean and lava. We soon realized that the civilization that existed had also been been built on lava flows. This results in beaches that we were not used to, with very little sand, and lots of lava right behind you and sprinkling the water a few yards from the beach. The redeeming qualities were the pristine waters which are required for snorkeling,  and the fact that the beach is usually a good ten degrees cooler than the grounds of the condo ten minutes away. The best beaches literally feature a palm tree for each blanket group, as long as you get to the beach before noon. 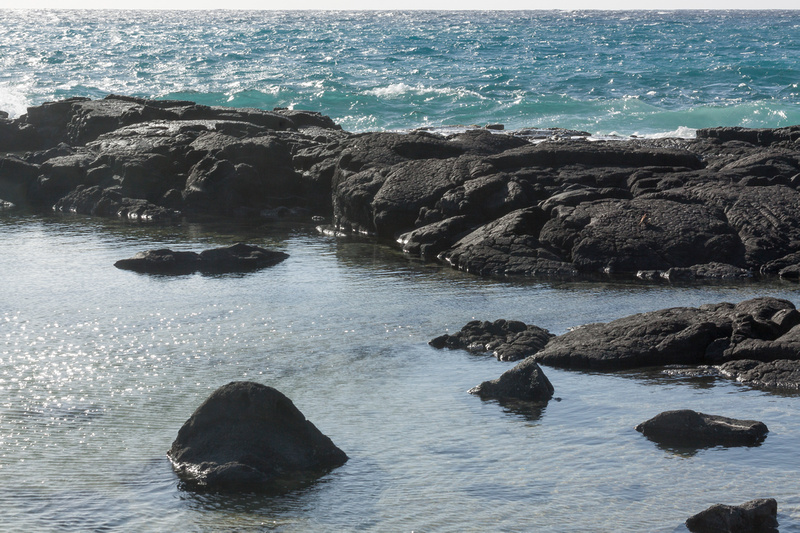 These beaches are also interesting since most are not just straight lines, but are little bays, so that there is something on the other side of the water, headlands which separate the "wonderful" beach which you have chosen from the one from the hoi-polloi next door, or even better, from the exclusive private beach one the adjacent resort grounds that won't let in the likes of you. Sometimes the lava flows are so extensive just off the beach that they protect a lagoon that has pretty much no relationship to the pounding ocean just beyond the rocks. 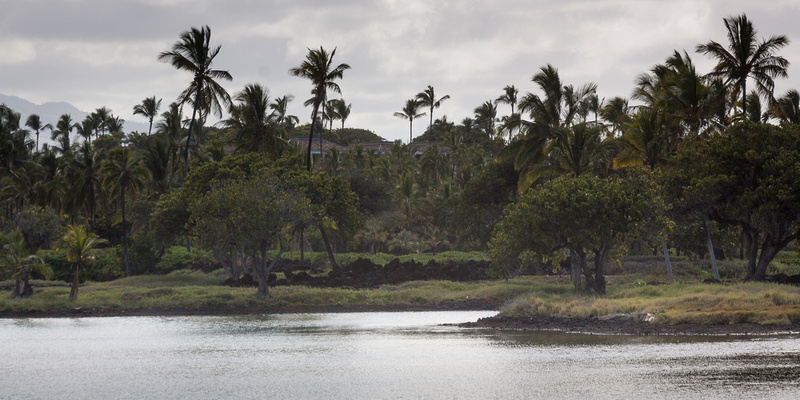 There are also some environments that you only discover on a trip to the islands, such as the ancient royal fish ponds adjacent to the ocean. These are placid centuries-old lagoons that cleverly allow ocean fish to enter, but not escape, to live out their lives before they provide dinner. Now they are parkland, with mile-long trails and islands on the grounds, shaded by palms. There are also some places that reveal a small glimpse of pre-resort desert, as long as you know where to look. 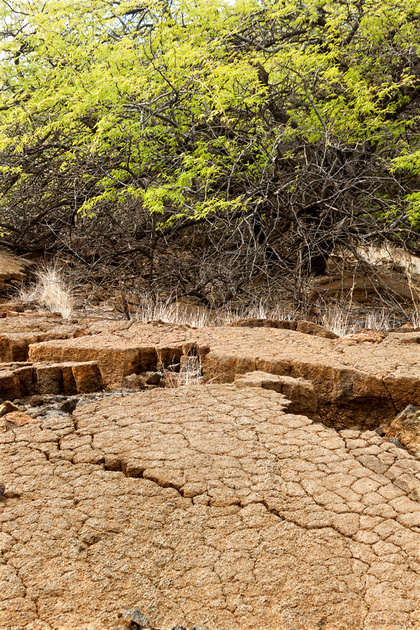 And there is always another beach. I would search for slightly different viewpoints, since I knew that only residents could probably achieve the perfect combination of clouds, surf and palms that my two weeks would probably not conjure up. 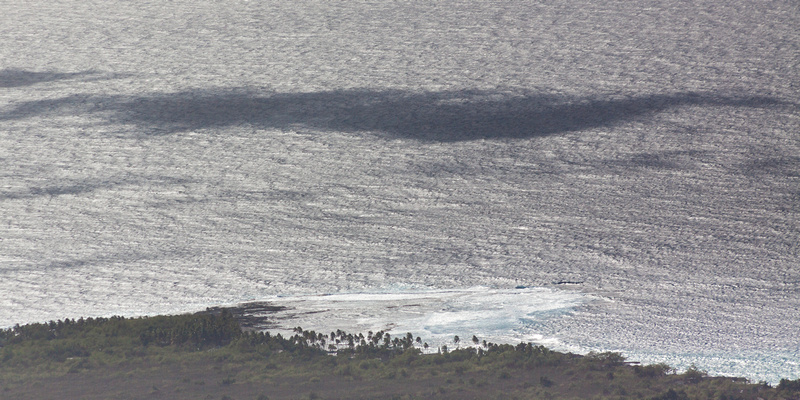 Sometimes all you need is a different perspective. we are eating lunch at a cafe on a ridge hundreds of feet above the beach. Those "weeds" below are fully-grown palm trees. 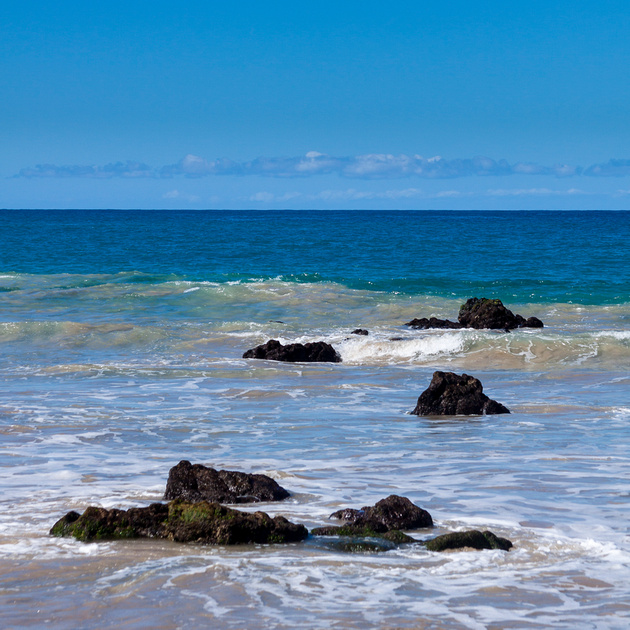 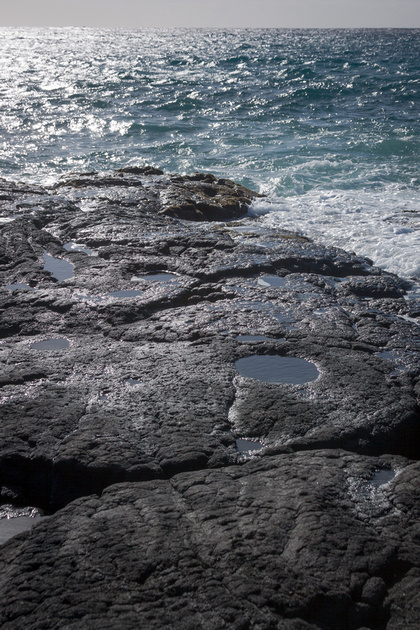 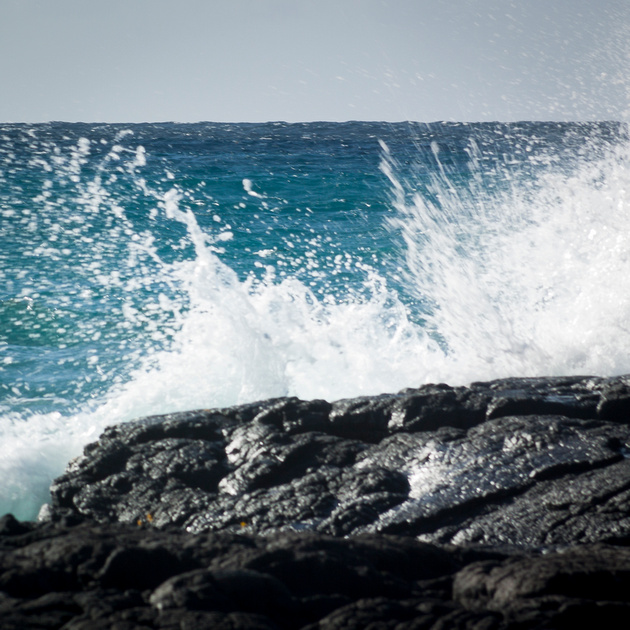 LOOK BUT DON'T GET TOO CLOSE : FINAL VERSION

The trick with Hawaiian photography for visitors is to adjust to the environment rather quickly. It was hard for me to realize that my usual vertical framing would just not work on the beach - that in fact even horizontal views usually benefited greatly from wide angle cropping. As an urban photographer usually interested in reflections, I'm not experienced with my polarizing filter, which is about as necessary on the islands as the analogous sunglasses you probably should be wearing to cut down on the glare.

As usual I compensated by concentrating on the details, ranging from my "intimate landscapes" to near abstractions. These allowed me to focus on the beauty available in this alien environment. 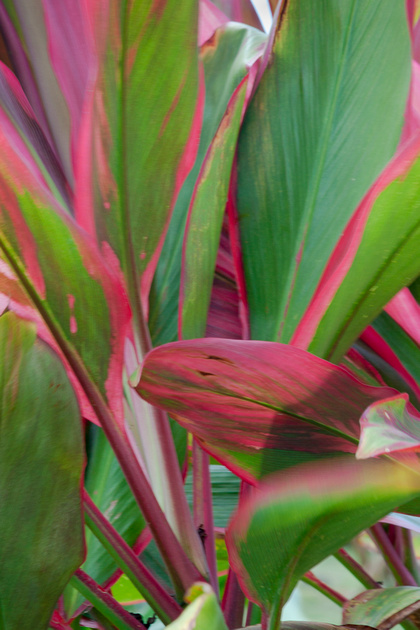 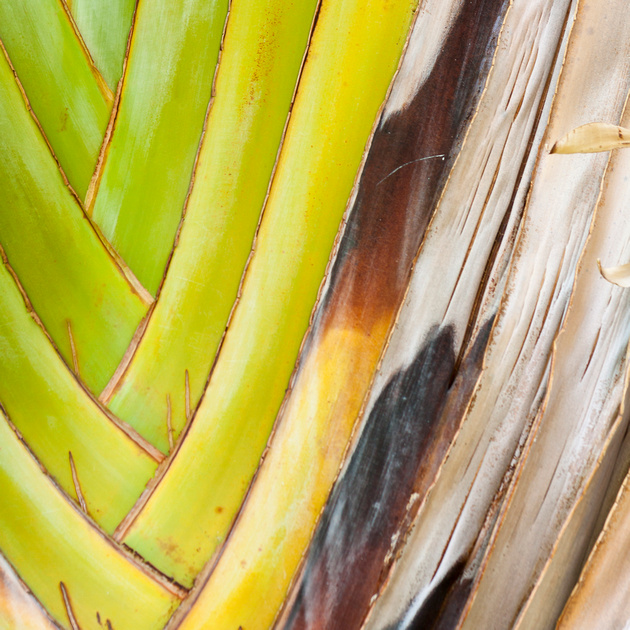 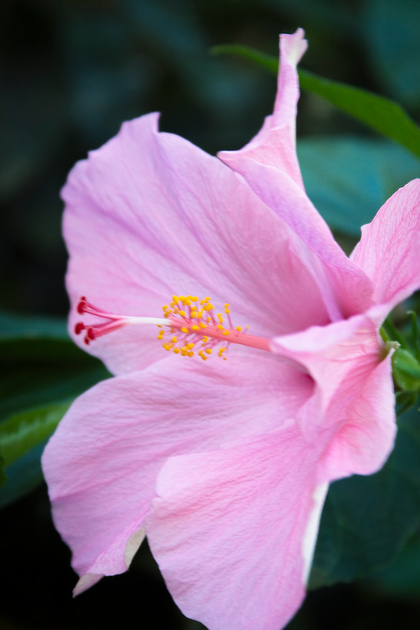 JUST OUTSIDE THE BEDROOM : FINAL VERSION

I hope you have enjoyed this return trip to the Big Island. I will leave you with a final image, one that I think that proves that a subject can transcend its documentary restraints. A palm leaf is not always just a palm leaf - it can stand in for a mathematical formula. 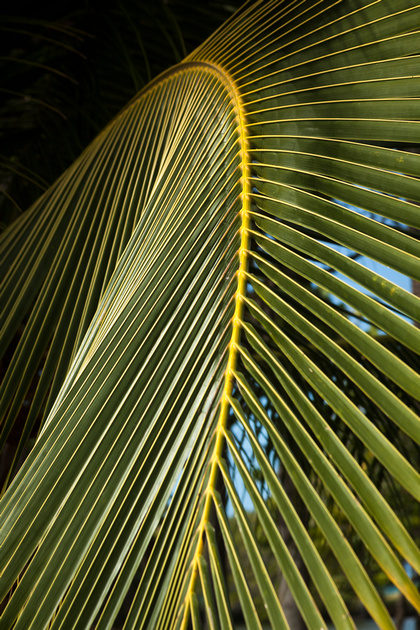