ANOTHER WALK IN THE WOODS 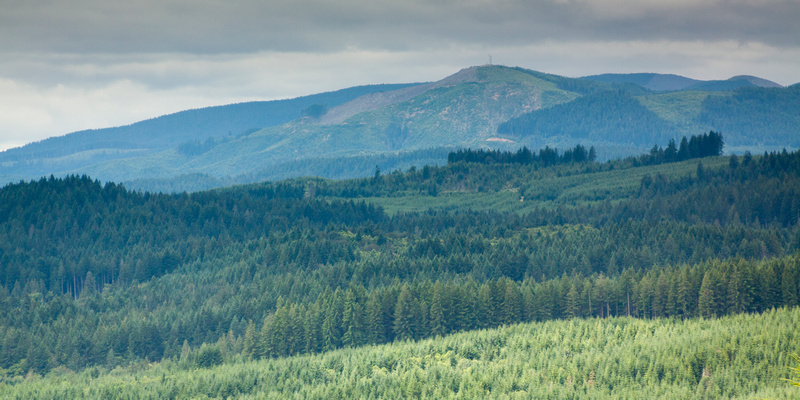 We went for another walk in the woods last week. I'd like to show you about half a dozen images from that trip, with the emphasis again on concentrating on the details that can make an environment sing. Woodland photography has two main "rules." You must use your compositional skills to find some order in one of the most complicated environments that exist - to make sense and find landing points amid the visual chaos. Your other mission is to resist including any sky in your images, since the sky's brightness will distract the viewer from the forest environment that you are endeavoring to portray. If you can find a subject to focus on, and eliminate distractions in both your frame and exposure, you are well on your way to developing some expressive woodland imagery. It's also great if you can find some fog, which can reduce the visual overload, but I have never been as successful at that as the landscape photographers that I follow on the web. Oregon's environment does usually provide overcast skies, which ensure that the woods do not become a confused tapestry of contrast - sunlight can ruin your photography in an otherwise dark environment. 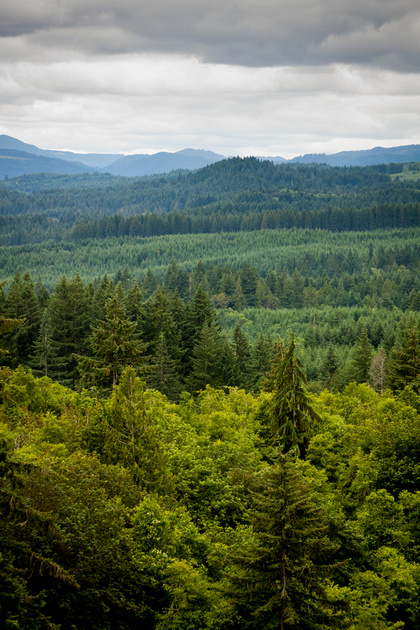 THE VARIED SHADES OF GREEN UNDER OVERCAST SKIES : FINAL VERSION

These first two overall images of the park, visible from the visitor's center, show the miracle of L.L. Stub Stewart State Park. The park was created through a series of land swaps with surrounding private and public timberland. The 1800 acres of the park stand in the midst of ordinary Oregon timberland off Highway 26 to the Oregon Coast. If you look beyond the park boundaries you will find the outlines of the generational cutting of Oregon forests, which denude hillsides for at least 20-25 years before they are presentable, even at long range. This state park was opened fifteen years ago and was the first state park to be created in Oregon since 1972. It is 34 miles from Portland, and is large enough to accommodate widely different user groups - hikers, horseback riders, off-road bikers, disc golf enthusiasts, campers - who can enjoy themselves without ruining anyone else's fun. After our first tip to the park, I feel a lot better about my state income taxes than I have in years. 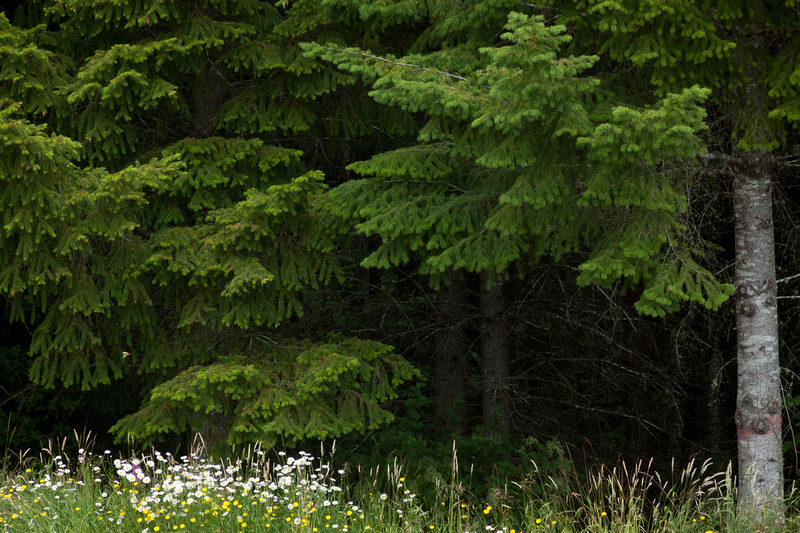 ON THE EDGE OF THE FOREST : FINAL VERSION

The hiking trails we tried out went through very varied environments in addition to typical Oregon woodland. This first image shows the edge of the forest, daisies right outside seemingly impenetrable darkness. 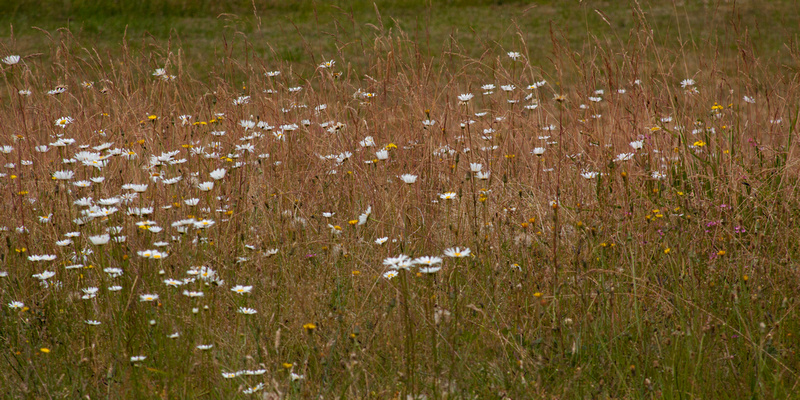 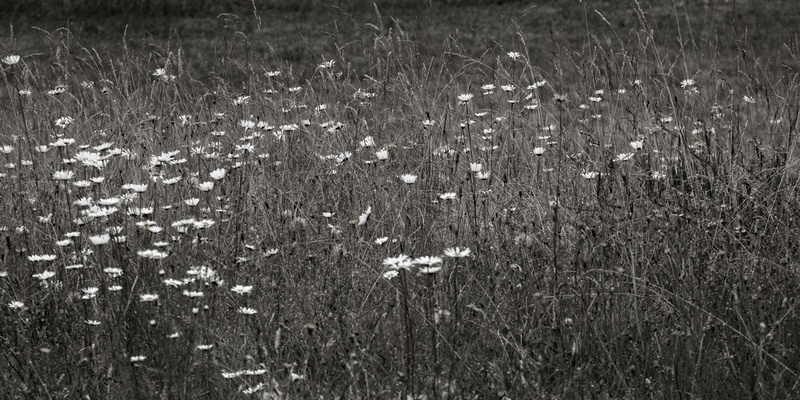 These "daisy prairies" exhibit character both in color and black and white. They seem to rise up immediately anytime the tree cover opens up, either through man-made interventions like picnic areas or in natural areas near recently fallen large trees. The color rendition highlights the subtle color variations in the underlying grasses, while the black and white plays of the contrast between the flowers and the grasses. 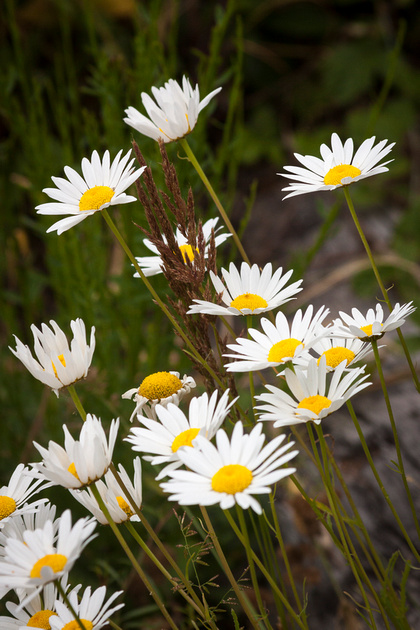 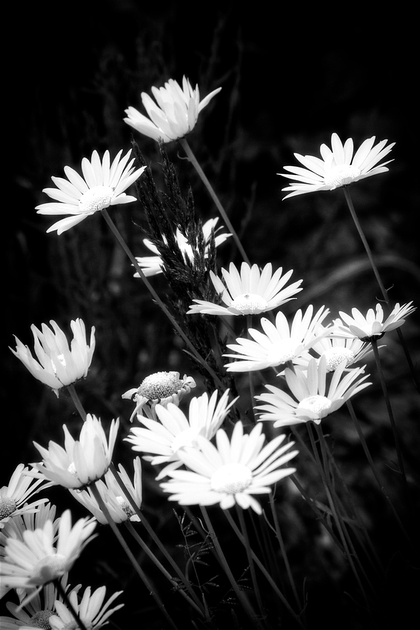 These daisy close-ups show the interpretative power of black and white - this exposure would not work at all in color, but allows an isolation of the flowers from their background while losing the yellow flower centers. 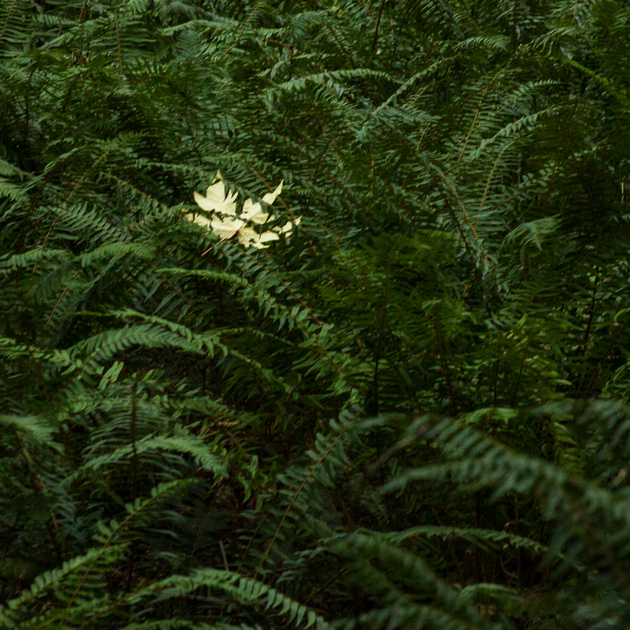 AMIDST THE FERNS : FINAL VERSION

As you move into the forest, Oregon ferns begin to take over. These yellow leaves were the only distraction in an ordinary field of ferns that could supply multiple garden centers. 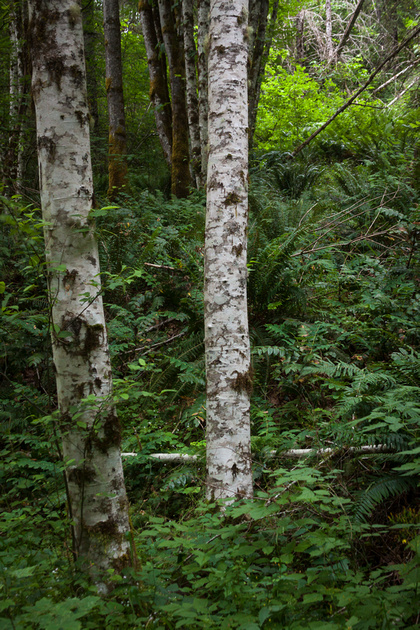 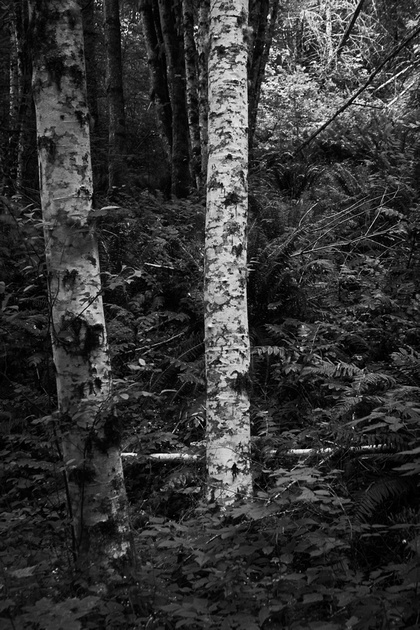 BIRCHES IN THE FOREST : COLOR AND B&W VERSIONS

The woodland we walked through on some of the trails was unusual for Oregon in that Birch trees seemed to rule the roost instead of the usual Douglas Firs. While they might not be the stark white of a stereotypical Birch, they did provide a lot of contrast with the green of the surrounding forest. This contrast works in both the color and black and white renditions, providing the focus for the image that will show the viewer where to look. It helps that the Birch trees are the lightest parts of the image. 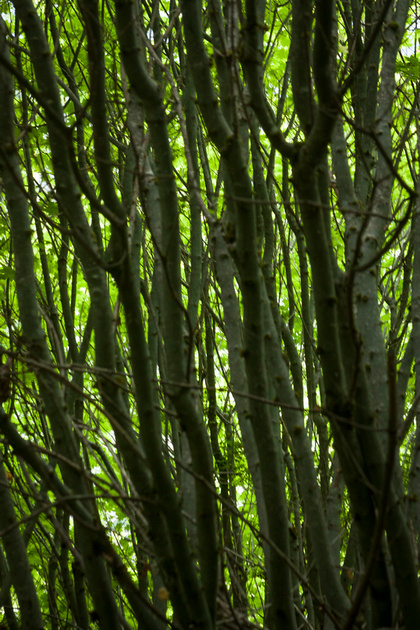 These are probably Willows, but the Birches also exhibited multiple trunks as their usual configuration. This image shows how the thicket can both highlight and screen the lighter background. 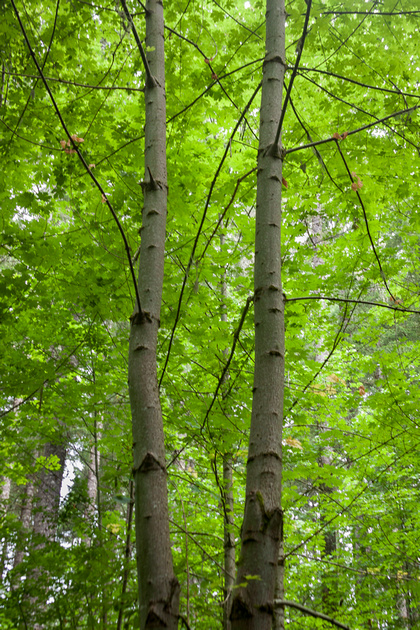 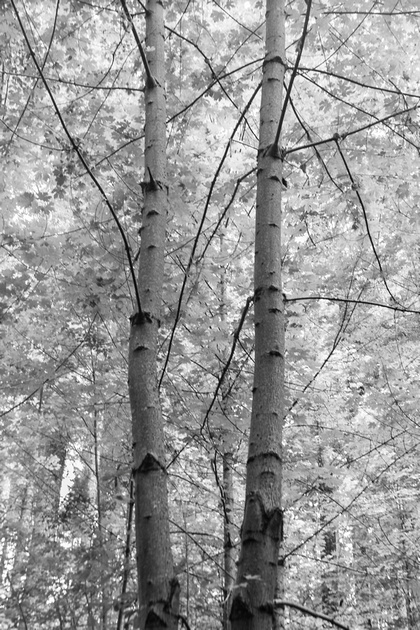 This final image proves again how a black and white conversion can allow for widely different interpretations of a scene. I was struck at how the two birch trunks stood out from the surrounding greenery. In the color version I discretely darkened the forest, especially the small areas of sky peaking through the foliage. You would be surprised at how these very small areas could still distract the eyes, and how a subtle darkening will not alter the overall scene. In contrast, forgive the pun, the black and white version allows me to lighten the forest for an ethereal feel. I could both lighten the green information that is still contained in the black and white file, and then use graduated filters to further lighten the forest behind the trees. These strategies would be clearly garish in a color rendition.

I hope you have enjoyed another short walk in the woods. And I hope that you see that you can create woodland imagery without having to travel hundreds of miles to a National Park, not that there is anything wrong with that. Good hunting.