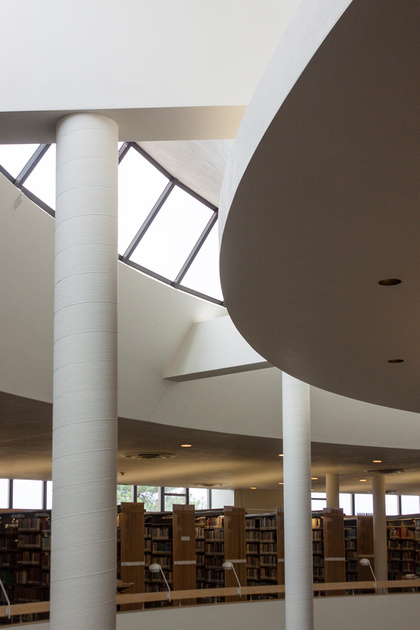 This week I'd like to discuss the problems and opportunities that face a photographer confronted by a place, either natural or man-made, that is both beautiful and somewhat resistant to communicate its charms. While I always encourage photographers to "work the subject", what about the idea that there is one obvious "money shot" - and that any other images cannot compete, are just variations on that shot, or way too narrow in scope. I believe that the answer to these concerns is for us to return to the idea of the photo essay, wherein we try to tell the whole story, or at least a large part of it, by including images that can support one another. Obviously it helps if you have an outlet for these stories, since the "money shot" will be the only one to sell, maybe, in a gallery. Since LIFE magazine seems to have lost my contact information, this blog will have to do. 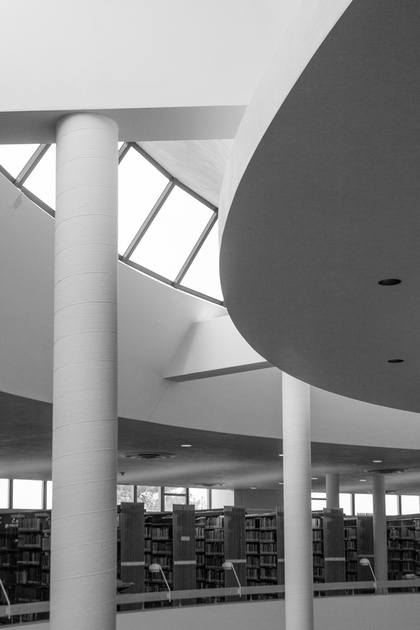 The subject of this week's essay is Alvar Aalto's library at the Mount Angel Abbey in the Willamette Valley, about two hours south of Portland on mostly rural roads. The monastery is essentially a small college campus on a bluff overlooking the valley, complete with a beautiful quadrangle comprising all of the requirements of a Benedictine religious community with spiritual links to Medieval Europe - a very nice church, dorms for the monks, a dining hall, an office space for the community, and paths to walk and think in the surrounding woods.  The monastery was started in the rural Oregon by Swiss monks in 1882. The seminary continues religious instruction, and laymen can come to participate in religious retreats with the monks. The Benedictines even carry on Medieval traditions by running one of the few monastery breweries in the nation in nearby St. Paul. While no t-shirts are for sale at the gift shop, I did once have to "shush" my young son Benjamin when he asked who this Jesus character was who seemed be prevalent among the items for sale. 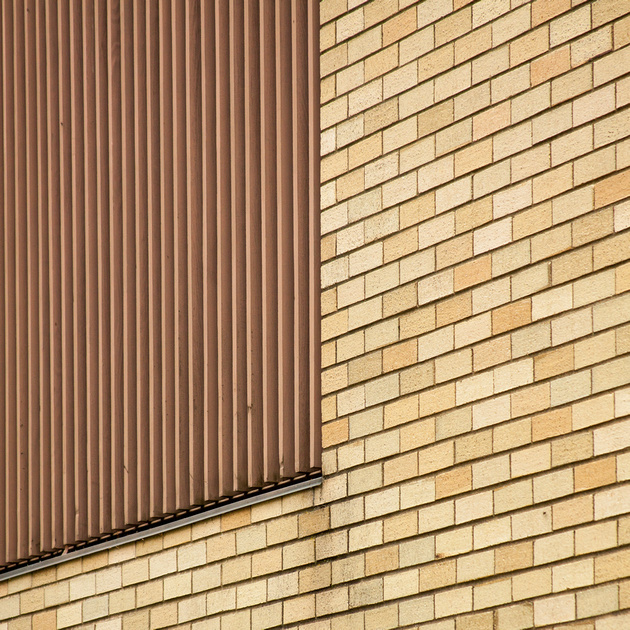 NOTHING TO SEE HERE : FINAL VERSION

The real reason for visiting this complex, for those in the know, is to see a building whose beauty is as totally unexpected as it is quietly unassuming. Every campus needs a library, and the monks get to use one of the most beautiful libraries in America. While the library does take advantage of a beautiful site, its quality has nothing to do with its size, the art it contains, or its collection of books. Unlike the great central libraries of large cities or well-endowed universities, this library's size and external appearance most closely resembles a quiet neighborhood branch library. The major difference is that one of the greatest architects of the Twentieth Century designed it.

From the exterior the library is so low-key that you could be excused if you just passed it by on your walk around the quad. It is a mute one-story structure whose quality construction and materials do not overcome an architectural reserve that fairly shouts "background" building - "nothing going on here, just move along." An image of the exterior facade would only prompt a response of "huh?" 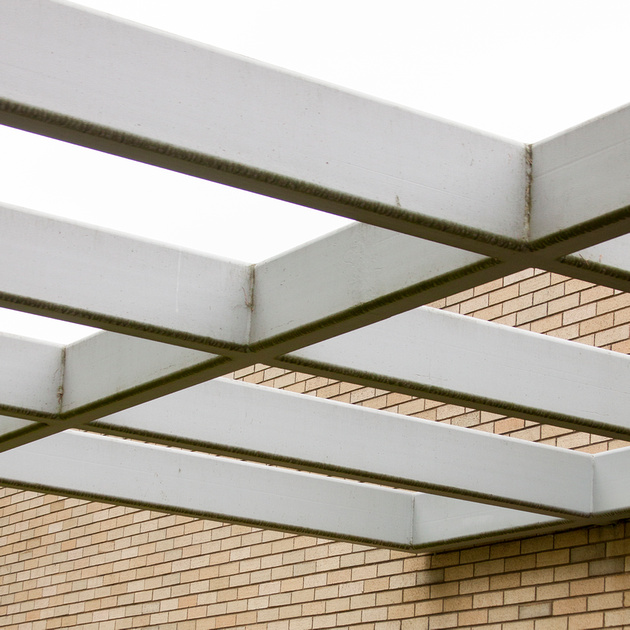 This is actually pretty characteristic of all of Aalto's work. His buildings might be handsome, but they are not pretty, and his concerns do not center on making a splash on the exterior, but getting to the fun stuff inside. It might even be said that his work is almost unphotogenic. It is certainly clear upon investigation that exterior elevations are nearly unnecessary - that all of the drama is in the floor plan, the cutaway sections, which form the interior spaces. The incredible detailing is more sensuous than obsessive, although its intensity will only make most architects wonder how charismatic he must have been to command such loyalty from his clients and their budgets. Aalto was one of the giants of architecture who seemed to be "modern" but stylistically apart from the holy trinity of Wright, Mies, and Le Corbusier. He most closely resembles Louis Kahn, another "architect's architect", whose work only revealed its power upon close inspection rather than through photography. As a photographer it can be somewhat hard to admit when you come to realize that a photograph cannot do a particular subject justice. 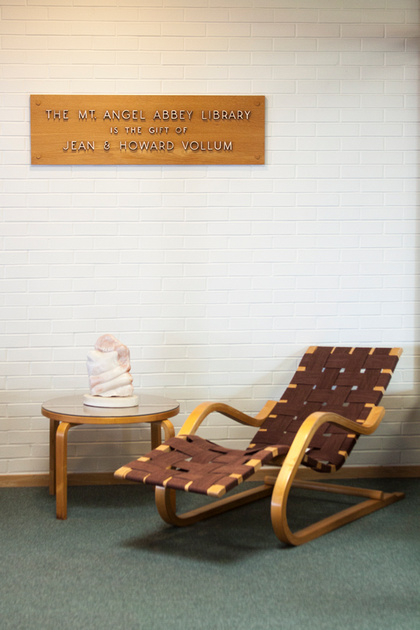 The monks actually wrote a letter to Finland in the early 1960's to inquire if Aalto might be interested in their library project. Almost all of his work was in Scandinavia, and he had only completed one project in the United States, a student dormitory at MIT in Boston. Since Aalto had designed several libraries and community centers in Finland, maybe the monks figured that he had another one in his back pocket. I Imagine it was analogous to when some advertising agency calls a classic rock band seeking permission to use what was once a counter-cultural anthem to sell insurance. "Well, hell yes, where do we sign?" 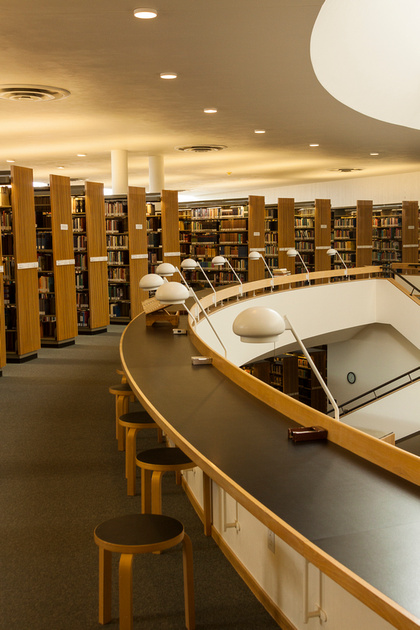 PULL UP A STOOL : FINAL VERSION

Aalto sent over a variation of his "typical" radial fan-shaped library design. At Mount Angel, his characteristic  plan expanded in three dimensions. The one-story building is revealed after entry as one cascading three-story space, flowing down the hill that surrounds the quad. The space is organized as a series of terraces, reading desk overlooks, and bands of skylights that configure the space without dividing it. The rows of book stacks radiate out and down three levels, and almost everything is theoretically in view from the circulation desk, without CCTV cameras. 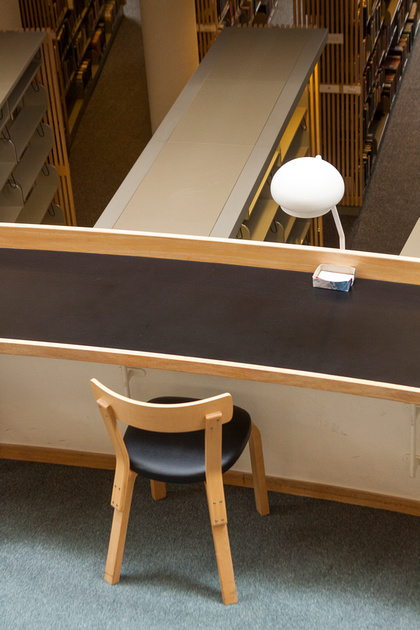 Once you get over the initial shock and awe, you begin to inspect the structure in detail, and discover to your delight that you are inside a "gesatkunstwerk", German for a project that has been completely handed over to the design team, down to almost every detail. For most architects this chance to influence nearly every aspect of a project is an impossible egotistical dream that would be such a shock as to almost certainly quickly lead to design paralysis. 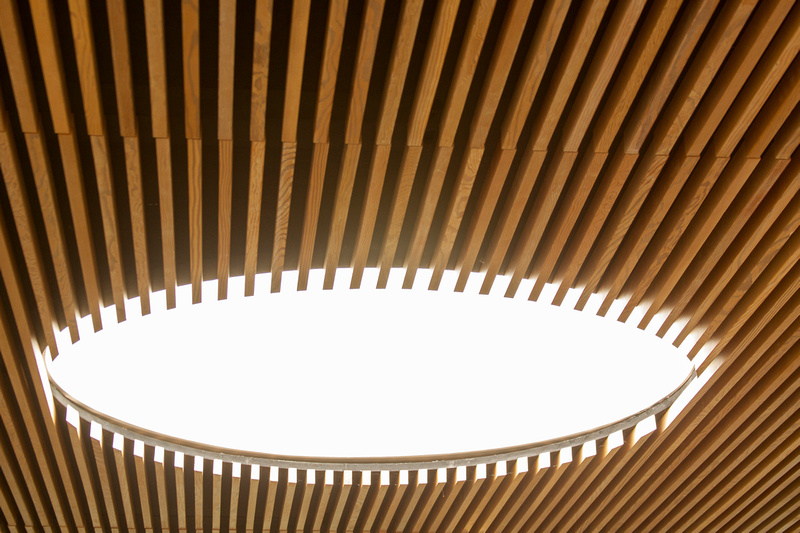 The library was dedicated in 1970 with a performance by jazz great Duke Ellington. Aalto, or at least his firm, designed almost everything at Mount Angel, from soup to nuts. The attention to detail, and the idiosyncratic details  themselves, reveal a Scandinavian sensibility brought virtually intact to Oregon. It goes way beyond the famous furniture designs that you can still buy for your home today, like the three Aalto stools we own, just as beautiful and utilitarian as they were when Fran and I received them as wedding presents 38 years ago. But rest assured that the library contains the most extensive collection of Aalto furniture in the United States.

Every detail is thought out and customized, such as the unique light fixtures on the continuous desks at the perimeter of each floor level. Utilitarian metal bookshelves have beautiful wood slat end caps that mirror the custom wooden ceilings over the circulation desk. Windows overlooking the valley are used to ennoble individual study spaces, while the overall windows on each floor are bands of transom windows that resemble the skylights at each break in the ceiling above. A private perimeter office is surrounded by such a beautiful obscure glass partition that you almost can't resist breaking in to see inside. You can almost forgive the madness of seven different types of skylights in the initial foyer alone. 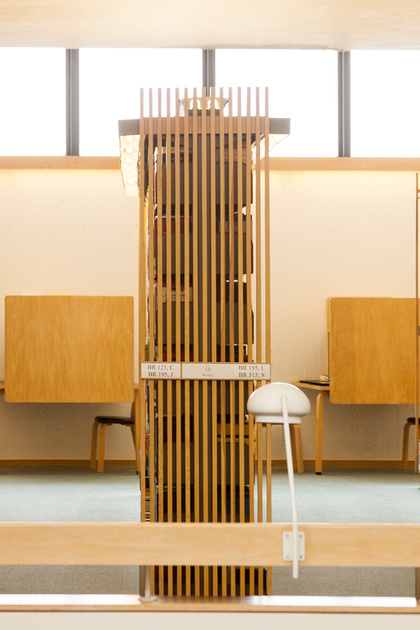 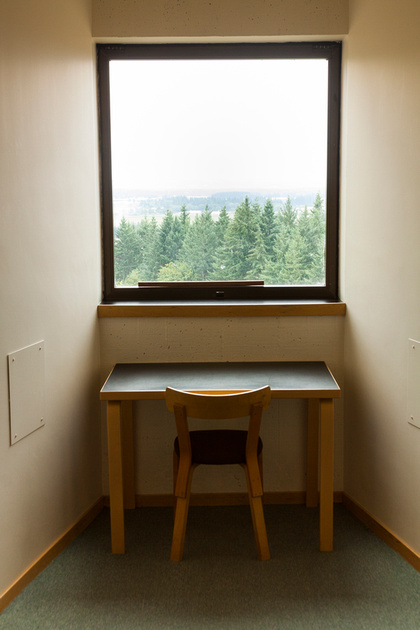 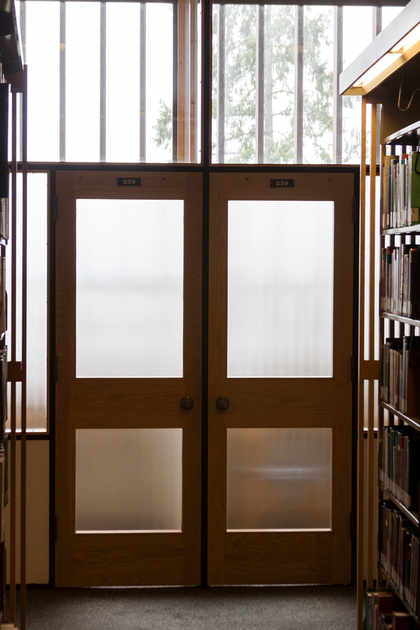 My favorite professor in architecture school once punctured my attempt to analyze an Aalto building by humorously pointing out the inherent difficulty of such an exercise. He revealed the secret of Aalto's "design method" by drawing a cartoon of a lightening bolt. Mere mortals could only appreciate his work, without truly understanding how it was done. Please  take a trip to Mount Angel and be thrilled by the show; the monks in their robes only add to the magic of the architecture. 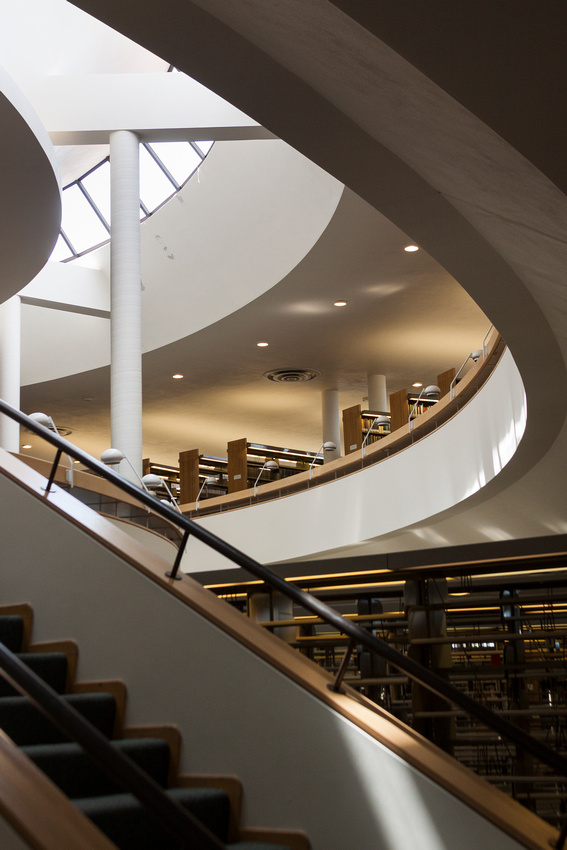 THE DRAMA EXTENDS TO THE "BASEMENT" LEVEL : FINAL VERSION