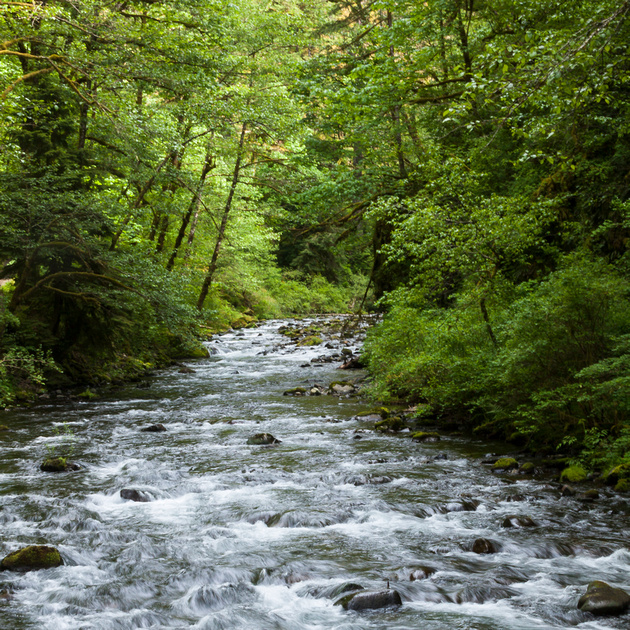 A RIVER RUNS THROUGH IT : FINAL VERSION

This week I would like to show you the images I captured on two hikes in the Columbia Gorge ten years ago. The commentary will be short and sweet, since my organizational talents have left me completely bereft of any real idea of where exactly these two walks took place. I know I should be upset, but what is the point? These images function as reminders of how blessed we are to live in such a beautiful place; they can stand in for generic Oregon Beauty Shots without too many more specifics. The real point I am trying to make is that this first image is the only one I have ever actually printed from those walks ten years ago. The value of Lightroom and my archives, disorganized as they are, is that I can take another look at images that would be lost otherwise, and find some that clearly deserve the light of day. It is that ability to go back in time, and post-process images from ten years ago with better software, and more importantly, better skill at using the software, that makes these forays so delightful. Yes, I'd "rather be out shooting", but what is wrong with going on a hike that you barely remember going on?

If I racked my brain I probably could remember exactly where these images were taken, but I think the images can stand by themselves without GPS coordinates. So let's take a look at some as photographs without worrying about their exact subjects. 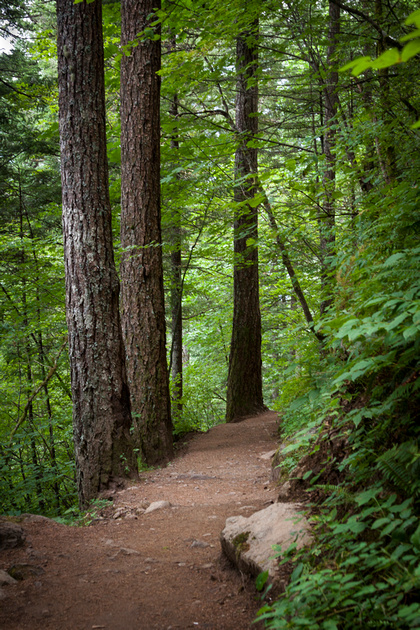 Fran and I are not world-class hikers, and my photographic efforts, and my incredibly slow pace, serve to slow down and shorten our trips into the woods. This image above illustrates the beauty and civilized nature of our typical hike - a nice, safe trail, so that the hike is about the surroundings, not the effort and danger involved in the trip. 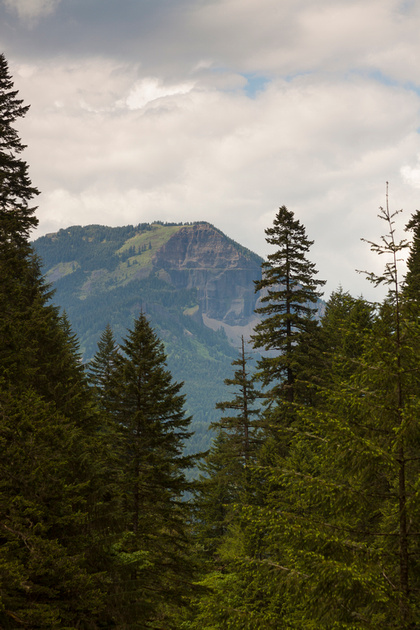 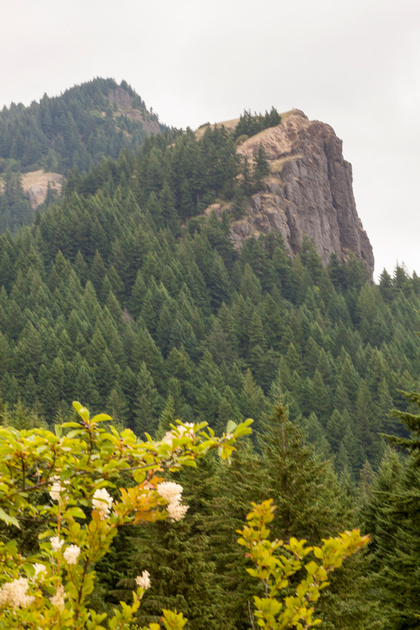 Which is not to say that the surroundings can tend to be spectacular. Some readers might even recognize these two mountains, which are no big deal in the context of volcanoes like Mt. Hood, but which served as the focus of the two hikes. Getting anywhere near the top is not on my list of things to do, but I can still admire their stature, even without remembering their names. I can take comfort in the knowledge that whatever the settlers called them, their native names were probably more evocative and had a several thousand year head start. 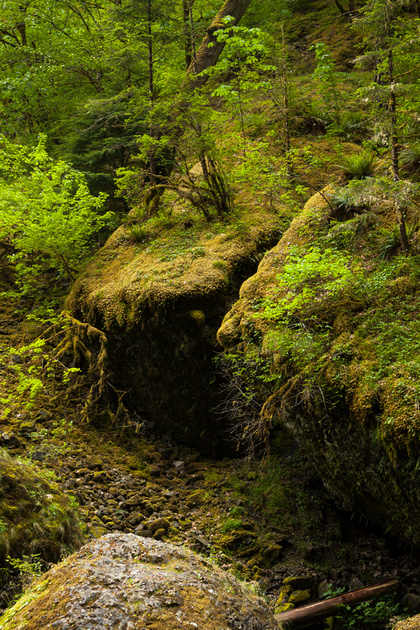 Sometimes a very quiet spot on the trail can mean more than the hike's apparent goal. This intimate landscape reveals the wide variety of tones present in what can seem an overwhelmingly green environment. I also frequently delight in the fact that I can walk in such  settings without worrying about the violent nature of how they were probably formed hundreds if not thousands of years ago. 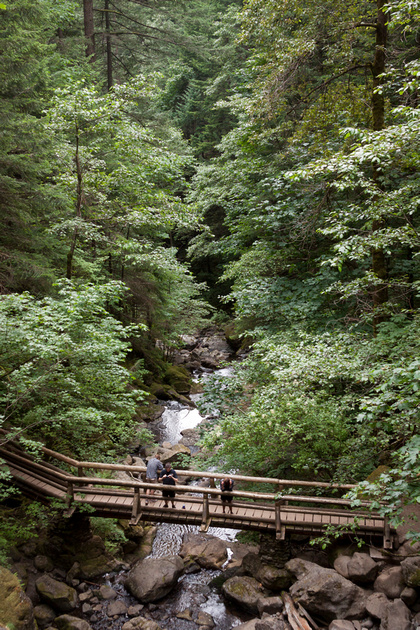 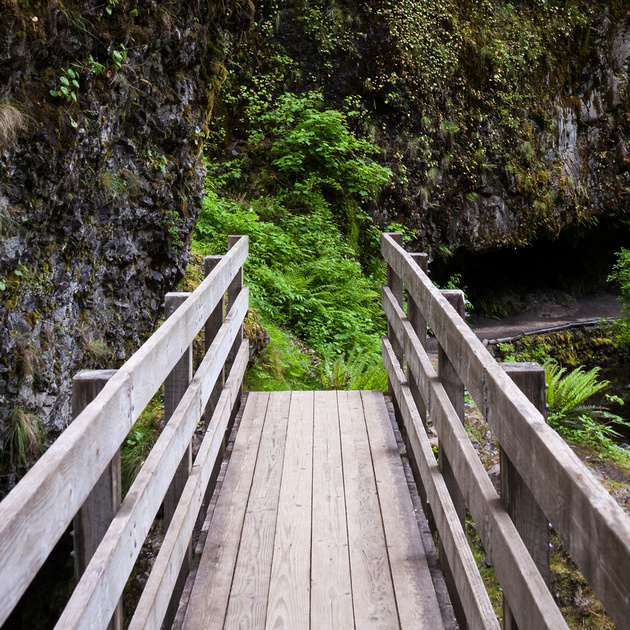 Often as a retired architect I can really appreciate the efforts that went into the creation of these trails that allow for my casual walks in the woods. Most of these trails were probably the result of "make work" projects by the CCC (Civilian Conservation Corps) during the Depression, and you don't have to be a socialist to wish for such energy today. These two views of this bridge, miles from civilization, show how their efforts both enhance and make it possible for ordinary people to appreciate this beautiful environment. 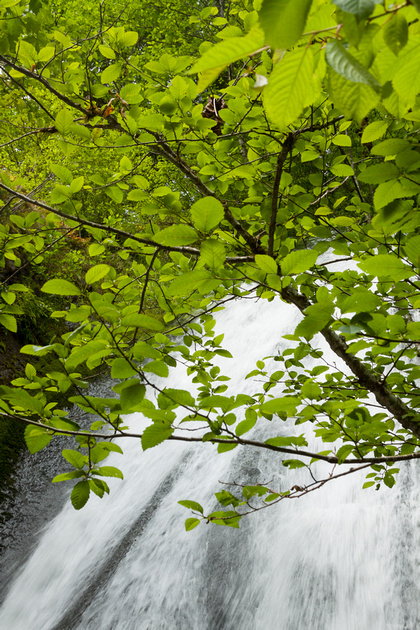 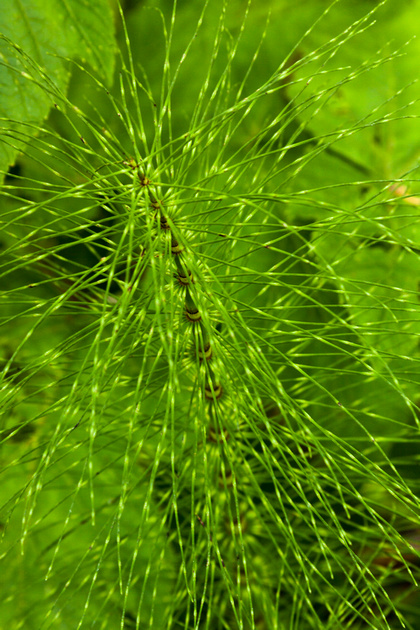 Of course it can help if you really slow down to enjoy the small wonders which can often be overlooked on the way to the overview. These two images highlight such moments. 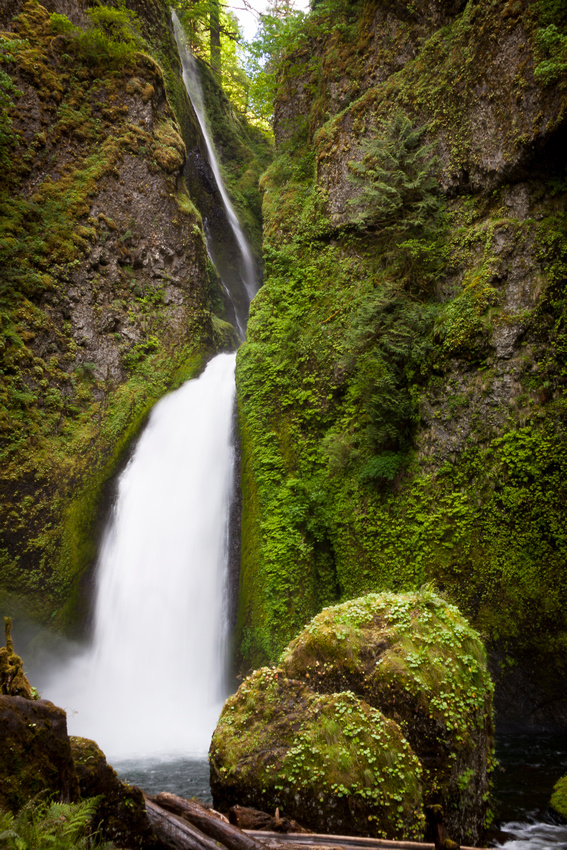 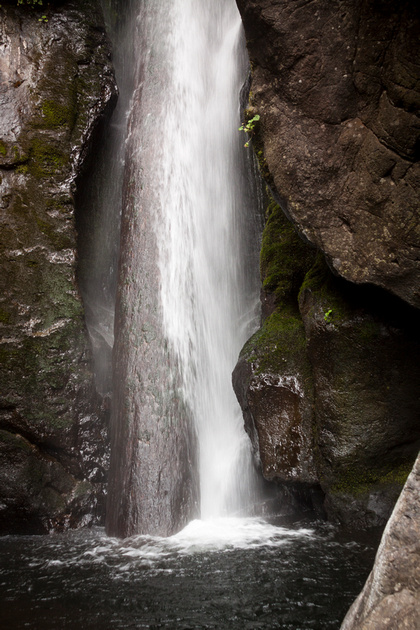 Then there are the waterfalls which are the usual "goals" of these trails. You can't beat a waterfall, although I sometimes wonder why mankind is so mesmerized by these water features as a proof of gravity. The Native Americans and hunters that forged these trails out of animal byways surely weren't in for the views, were they, so why do waterfalls provide our excuse for these walks in the woods? But you cannot deny their power, especially when you consider that the water formed the immediate environment. Aren't you glad you were not around the day those rocks arrived at this beauty spot? 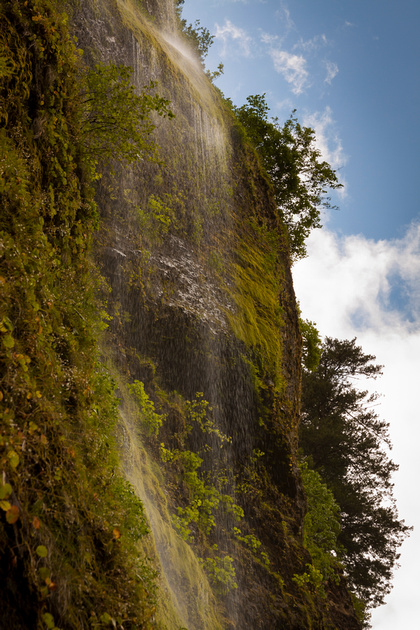 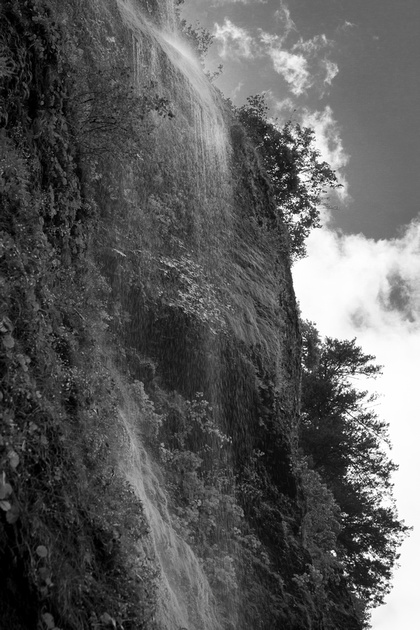 The gorge environment is generally so wet that you don't even have to name the waterfall. These two images show what happens when the very walls of the canyon seem to be weeping. The black and white version allows for more subtle manipulation of tones to bring out the wispy water down the cliff, but both versions are enhanced by very subtle "dodging and burning" of light and dark areas to bring out the contrast an make the image really pop. Sometimes these efforts can seem so subtle as to be a waste of time, until you throw the "switch" and see how much of a difference your work can make in bringing out what you saw in the first place. 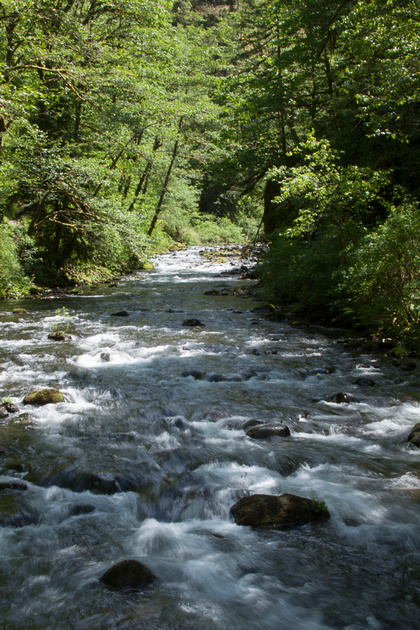 A RIVER RUNS THROUGH IT : ORIGINAL

A RIVER RUNS THROUGH IT : FINAL VERSION 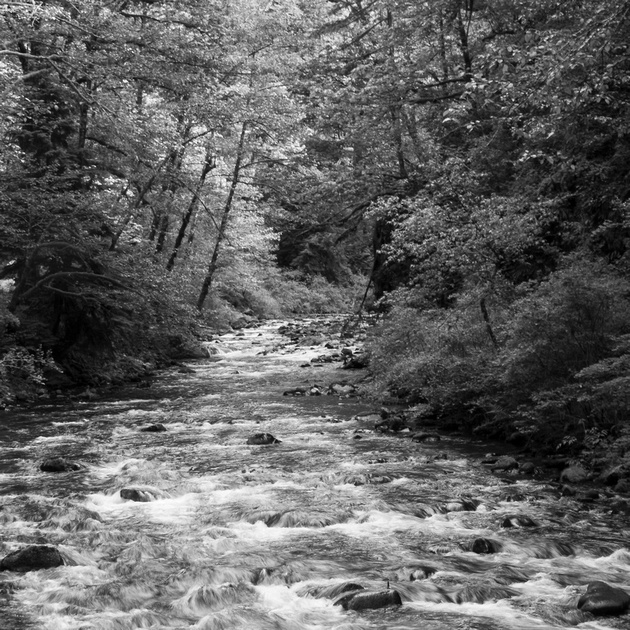 A RIVER RUNS THROUGH IT : FINAL B&W VERSION

Finally, let's get back to the one image I thought I had gotten out of these two hikes ten years ago. On the way to the waterfall it is easy to overlook the stream that will make it all possible. On this day those trail builders had fashioned a bridge right over the river, allowing me to focus on the beautiful leading line that it provided in the forest. The square coaster crop eliminated some of the foreground, bringing you closer to the action. This final image also shows how sharpening, enhancing contrast to bring out the rapids, and some subtle saturation of those gorgeous greens can make an image pop. It's a matter of taste, but the details and range of tones in the the black and white version show that you don't really have to rely on the green at all.

Obviously, you have to appreciate the process in photography, since you can hope for only one "keeper" out of one hundred shots you might take on a hike, or in a month. While this is generally true, and nothing to be ashamed of, I hope you can see that  you can find more than one image from a trip that is worthy of your efforts. You just have to be willing to take the walk again.