THE SCANNER AS TIME MACHINE 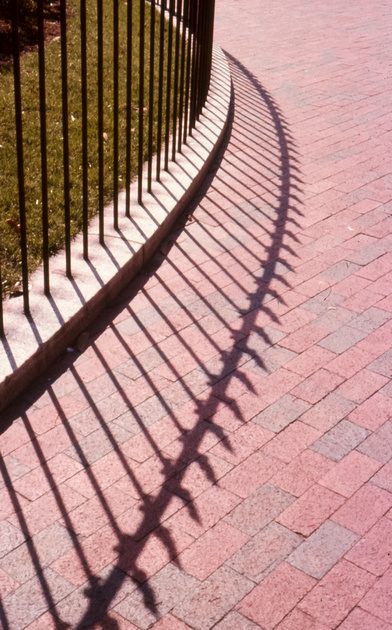 This week I would like to extol the virtues of the scanner. This machine allows the photographer to delve deeper into his or her archives. This assumes that they have enough years under their belt to have photo albums of old prints, or even old slides which they can no longer view because the projector is in a landfill somewhere. The scanner is actually a type of time machine, since it converts these artifacts into digital files that can be processed in Lightroom and be resurrected as digital images that can be improved far beyond their analog origins. These images are examples of my work, long unseen, which I can now exhibit. And prove, at least to myself, that I wasn't half-bad as a photographer decades before I considered the idea that I was an artist. Even though I can remember taking all of these photos, I really cannot claim to know their exact locations, subjects, or dates of origin. I know they are mine, but beyond that there is some element of mystery. This allows me to appreciate them as compositions even more, somewhat divorced from the reality of space and time. 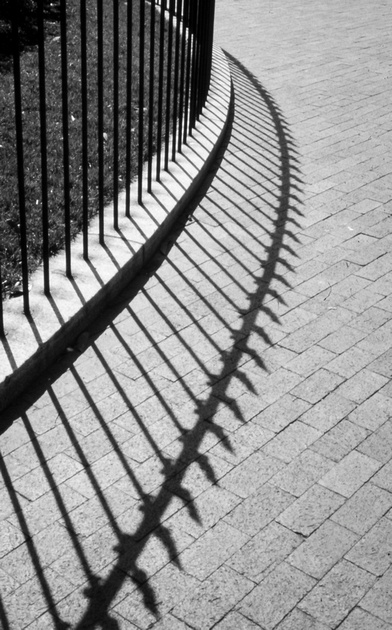 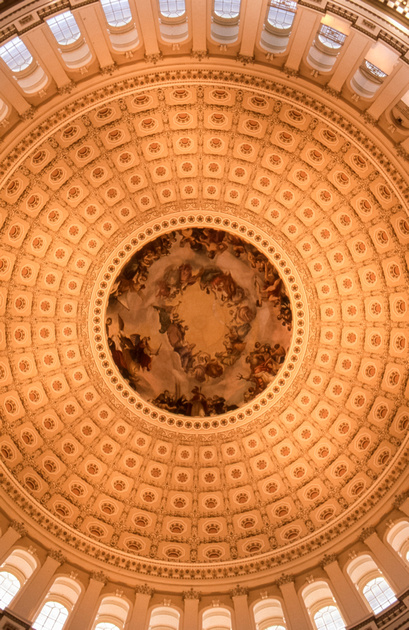 I SUSPECT THIS IS THE LIBRARY OF CONGRESS, BUT I COULD BE WRONG : FINAL VERSION

These first two images are both from my time in Washington, D.C. during the Reagan and Bush the Elder administrations. I lived in Arlington, Virginia, so at least I could vote, even if I rarely voted for a winner. Fran and I are old enough that when she really wants to get my goat she can accuse me of being a Reaganite, which in today's context can seem almost quaint. The first image I can almost swear is from Lafayette Square across the street from the White House. The real hint that it is Washington and not London is the brick instead of cobblestone. I don't really have a preference between the graphic qualities of the color or the black and white version. The color image shows off the red brick, while the black and white version emphasizes the curve and shadow of the railings. The second image could be the Library of Congress, but it really appeals to me as an example of the power of the dome as an element of architecture. I also enjoy that the awe I felt can be conveyed without showing the entire dome - your brain completes the circle without the fish eye lens I have never owned. And if this isn't the Library of Congress, does it really matter? 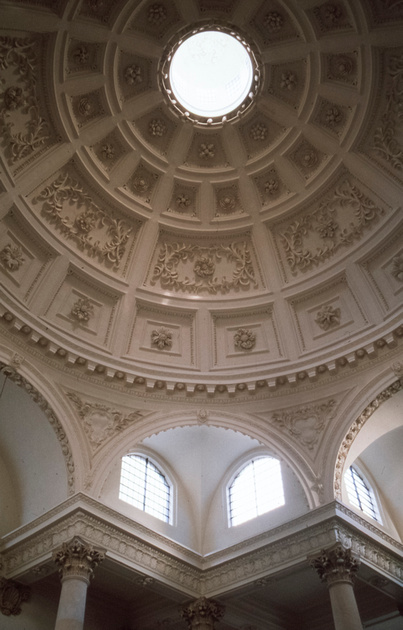 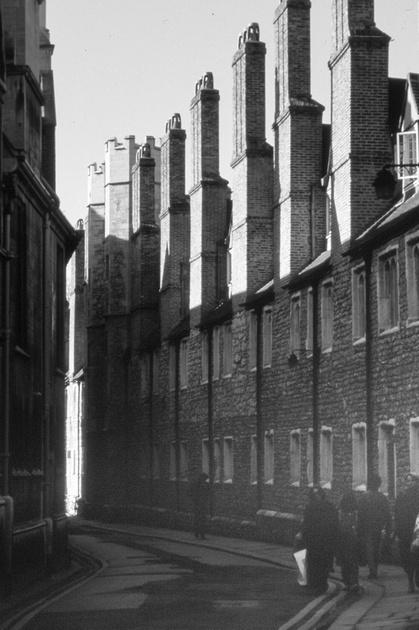 These next two images are from London, but I do not know when they date from beyond the fact that they are pre-digital, which places them somewhere in the late Twentieth Century. I lived in London in 1976, and visited with Fran in 1977 and 1990. The first image is from some Wren Parish Church which again shows the power of a much smaller dome. This dome in fact hearkens back all the way to the Pantheon, although this oculus is a skylight which at least blocks the rain. The second shot looks like an image from a detective show with the subtitle of "Somewhere in London." My post-processing now reveals the street which was completely lost in shadow in the original slide. I converted the image to black and white to mask the overwhelming noise in the color shadows. This allows the viewer to focus on the row of chimneys which originally attracted me to the scene. It's almost as if the Victorian architect cared much more about the sculptural qualities of these chimneys than the actual row of dwellings themselves. At least the masons got to show off. 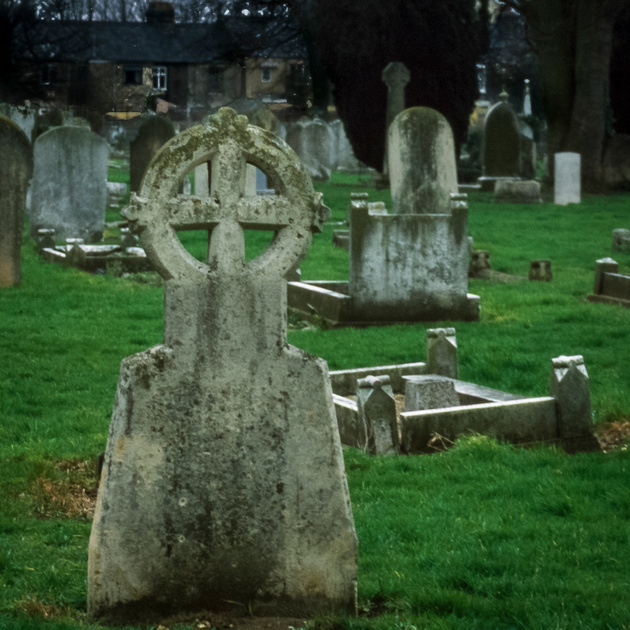 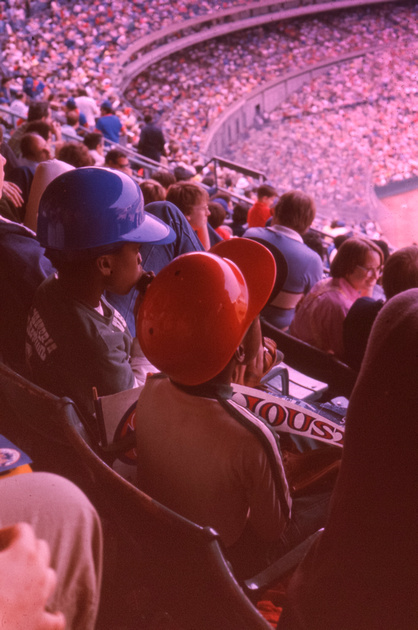 These next two images are from Old New York, and are more than 40 years old. I believe the first is a detail from the graveyard of Trinity Church in Lower Manhattan. Trinity's spire was the tallest building in New York before the first skyscrapers were built, and was carefully framed from a certain angle by the space between the Twin Towers. I carefully cropped and darkened the background to remove any hint of the late twentieth Century. The second image is a rare "street shot" taken at a day game in the early 1970's. The two brothers seemed to rooting for different teams, or at least had two different favorite colors. Presumably they are now in their late fifties, and hopefully have as fond memories of Shea Stadium as I do. My post processing allowed me to balance the exposure between the cheap seats I was accustomed to and the sunlit expanse beyond. Shea is no more, but at least I can still hate the Yankees. 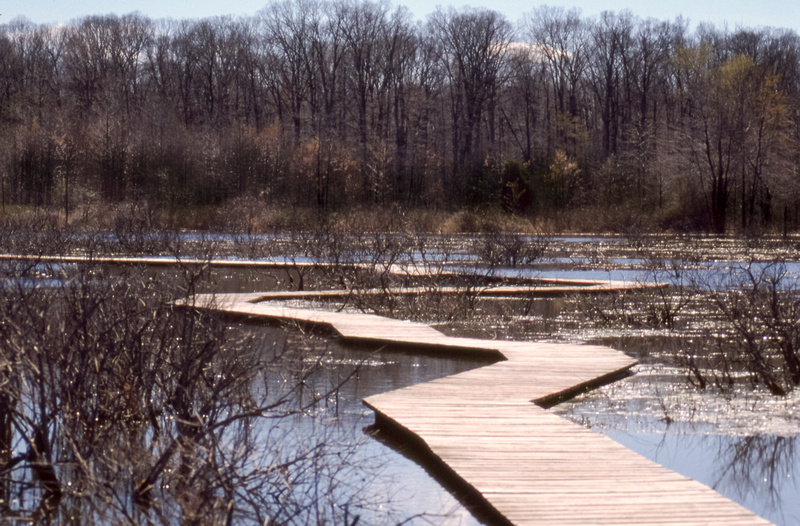 These last two images come from somewhere and some time lost in obscurity, but I have always felt the compositions held some interest. My post-processing of the scanned images elevated them far above their one-hour origins. I love the boardwalk, whose design reveals the arbitrary whims of it's designer as it weaves it's way across the water. The image's age is highlighted by the absence of any politically correct safety railings. Presumably there were no gators in the shallow water. By the way, we were probably walking through what we innocently called "swamp", way before the reign of the "wetland." 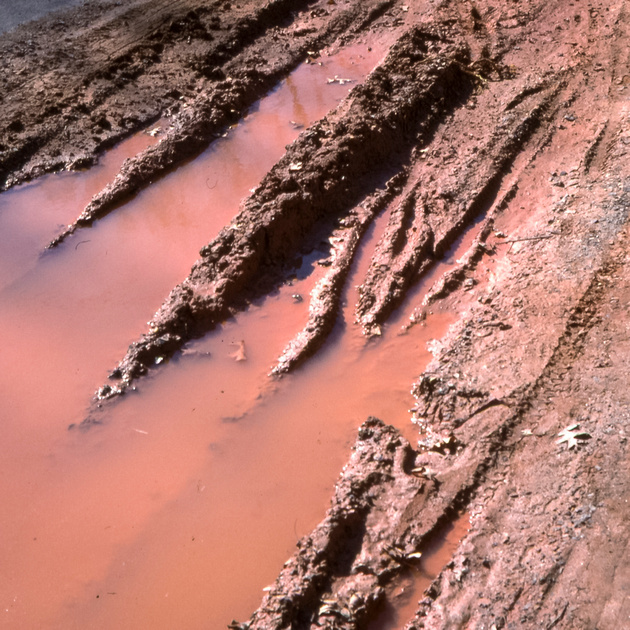 This image is my homage to a photograph on a famous Jazz album I owned as a re-issue (!) in the early 1980's. Back when there actual album covers, an image a lot like this one graced my copy of Freddie Hubbard's "Red Clay." And while I certainly wasn't in Georgia, this sodden dirt road caught my eye because I was familiar with the other image. I cropped it to highlight the most interesting part of the photo, making it into a square because, like coasters, record covers were square.

I hope you have enjoyed this trip down Memory Lane, even if my memories are somewhat hazy. I encourage you to revisit your own pre-digital archives with the goal of utilizing the scanner time machine to allow you to improve and use your images from yesteryear.