IT'S ALL IN THE DETAILS 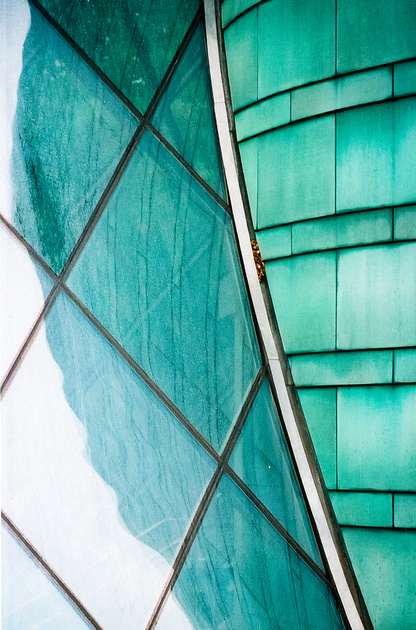 This week I'd like to discuss the value of focusing in on the details. While this applies to most photographic subjects, it really comes into its own in architectural photography, especially in the type of image-making that I am particularly interested. I started out in my photographic journey on the mission to document my own projects as an architect, since I couldn't come close to being able to afford professional architectural photographers. My particular circumstances forced me to pay attention to small parts of the project - I didn't own the wild angle lenses required for most interior photography, and I didn't have the support staff required to "stage" a house for the typical magazine shoot. Since most of my projects were variations on small scale residential additions, I didn't want to focus on the whole house anyway, even if most of my designs were pretty sympathetic to the existing house designs. 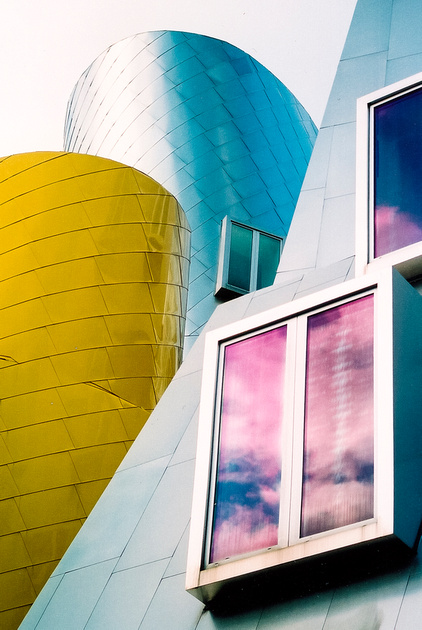 I gradually realized that my developing photographic style, such as it was, had pretty much nothing to do with the professionals I couldn't afford - while I couldn't even approach their technical skills or equipment, as a practicing architect I knew where to find the "money shot" that could explain the value of the design. Of course it didn't hurt that I was the designer, and to give myself a little credit, I wasn't trying to photograph a horrible or at best mediocre design, which is the lot in life of most professionals. It was only when I went on a shoot with a professional architectural photographer and saw the shot list provided by the architect, that I realized the pretty unique position I was in. Most architects had no idea how to photograph their own designs, and most photographers couldn't think like an architect. Even when confronted by a high-quality piece of design, they couldn't find the "money shot" which would celebrate the skill of the architect. 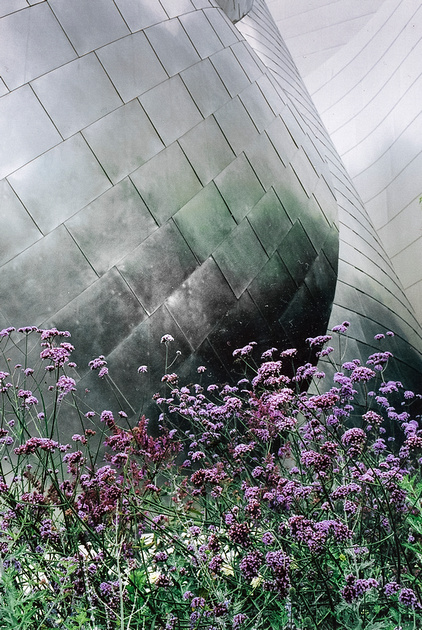 These circumstances led me to focus on the details of architecture, to document the small wonders in a work that I could celebrate instead of just documenting the entire building. I now realize that this approach guides my art whether I walk through my neighborhood noticing small details on ordinary buildings or visit a famous structure half-way around the world. And I know that this leads to a more individual set of images that I can call my own.

These first three images come from the work of Frank Gehry, one of the most famous architects of our times. They show the problems and opportunities that can arise when exuberant sculptures collide with our more pedestrian orthogonal world. You still have to keep the water out, or at least try. Think of the poor guys and gals who have to figure out how to place ordinary windows in the boss's sculpture, or to even sheath compound curves with metal panels. But the true genius of detailing comes when it serve a higher purpose. The third image of Gehry's Symphony Hall in Los Angeles shows the incredible garden that sits amidst the sculpture. While the building is so delightful that it qualifies as architectural porn, I for one insist that it looks just as silly on the street as Wright's Guggenheim - the best you can say is that it "enlivens" the streetscape" after it has fallen there from Outer Space.  Yet it is only when you get to visit, and walk up an ordinary stair from said street, that you get to spend as long as you like in a block-long roof garden on the roof, available for free with out even entering the building! 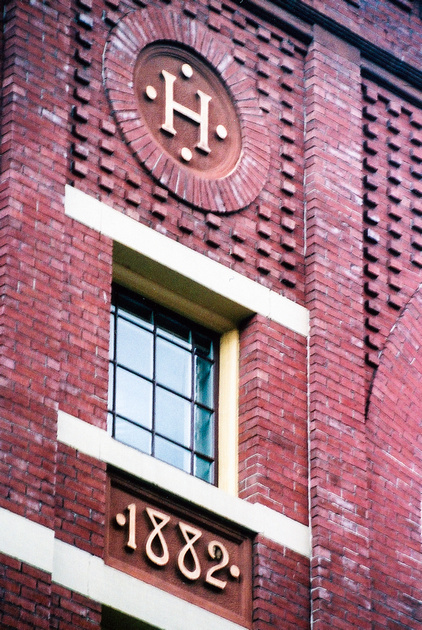 Architectural detailing started with a need to cover your ass, to figure out how to try to prevent water from getting into your structure. It was further refined to hide pretty much any joint - between wall and ceiling, wall and floor, any corner - that needed to screen the fact that materials and carpenters were not perfect. Since architecture is an art as well as a science, soon designers started using detail to celebrate their own ingenuity as well as to allow their craftsmen to show off theirs. That is why a beautiful detail can grace any structure, since you have got to build the wall anyway - why not allow the carpenter to show off a little? And that is also why old buildings have value, since both the architects and the carpenters came cheap, and the builders could afford to let them amuse themselves to a certain degree.

Masonry seems to have been delivered by the Almighty so that both the designer and the bricklayer could celebrate their existence. I think the first image shows a detail from a Massachusetts warehouse, which celebrates the structural piers and arches, and shows how the world's most ordinary "building block" can be manipulated to decorate without decoration. Throw in the pride of the mysterious "H" and the year of it's creation, and you have a beautiful warehouse. 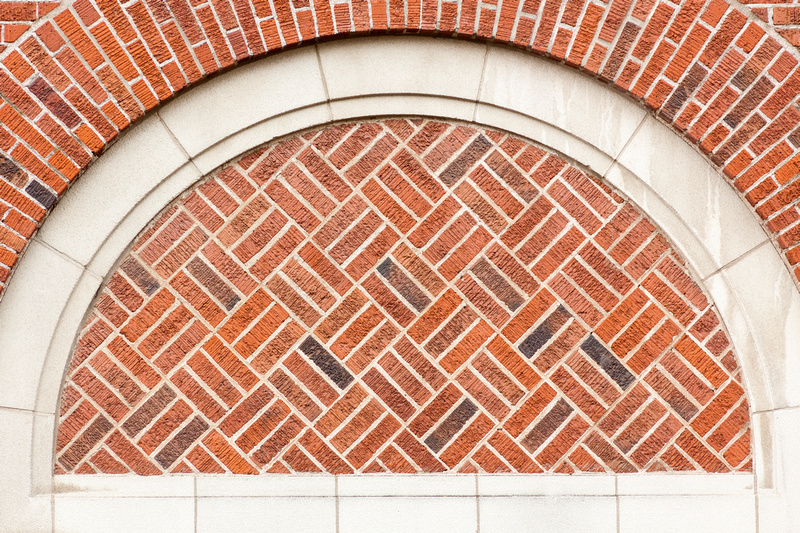 IF YOUR SCHOOL IS NAMED GROUT, IT MIGHT BE A GOOD IDEA TO LET THE MASONS GO WILD : FINAL VERSION

Or think about the pride inherent in this brick detail above a side door of an ordinary Elementary school in Southeast Portland. The side door! 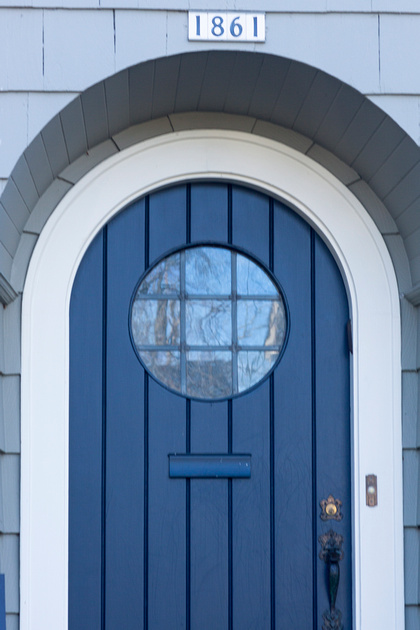 IT'S BEAUTIFUL, AND THE CLIENT WAS A LEFTY : FINAL VERSION

This is the front door of a bungalow in Southeast Portland. Just imagine the pride of the designer and the carpenter who created this entrance. The street number above is an example of a Depression Era Portland "make work" project when the city fathers encouraged the idea that houses should proudly show their addresses with ceramic tiles that would employ both craftsmen and carpenters. 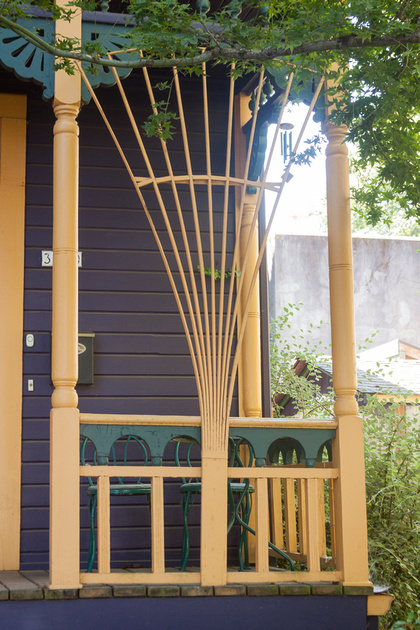 AND YOU CAN RAKE LEAVES WITH IT! : FINAL VERSION

Or think about this exuberant porch detail on this small Victorian porch that ensures that this house is at least special if not unique. 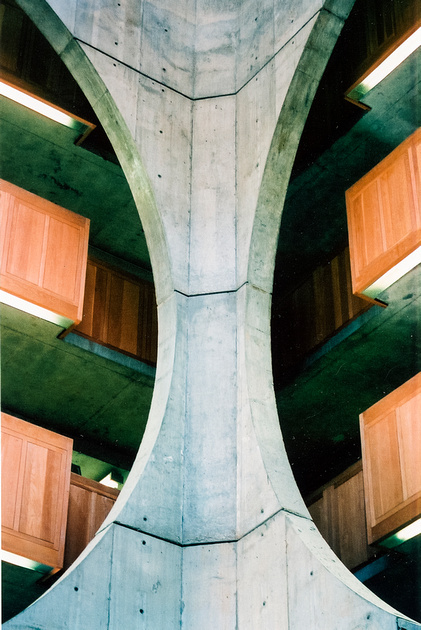 CAN ARCHITECTURE BE SENSUOUS? : FINAL VERSION

When you get to an institutional client where price is no object, then budgets cease to matter. This is a detail of Louis Kahn's library at a small and over-privileged boarding school in New England. Forget the fact that you are looking at one of the corners of a four-story atrium at the center of the library, and that these concrete circles reveal the stacks and study carrels beyond. Think about the idea that this is some of the most sensuous concrete ever created, and that most every surface that is not concrete is incredibly detailed oak paneling that is worthy of fine furniture. 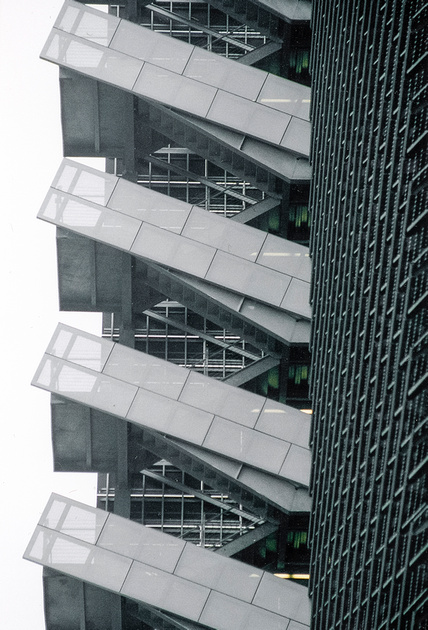 Sometimes detailing, like everything else, just goes too far. A recent development in architectural design is a celebration of detail that can become almost a substitute for the attention that must be paid to most other facets of design, in my humble opinion. It is no wonder that institutional projects can now cost $1500 per square foot. This is the emergency stair on a government office building in California, which if you look closely still requires a handrail behind its glass facade. 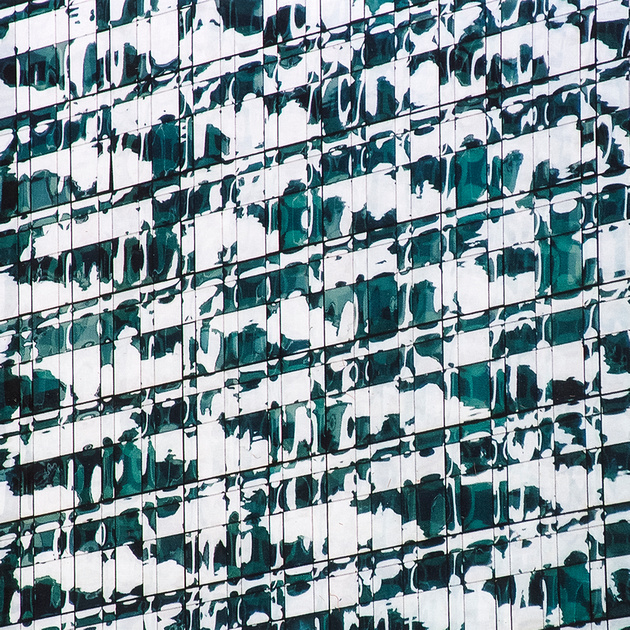 REFLECTION OF WHAT? : FINAL VERSION

I don't even remember where this facade was located. It amazes me that with all the attention to the incredible detailing of this curtain wall, that the architects did not realize that they were building an architectural Rorschach Test that would obscure their own efforts. It was up to me to notice this profound accident of intention meeting reality.

These images from my archives and from strolls last year show the range of delight that can be found when people - clients, architects, craftsmen, even societies - have a modicum of pride in their work. While the downside is that this can be a rarity, at least when I find it I like to pay attention.