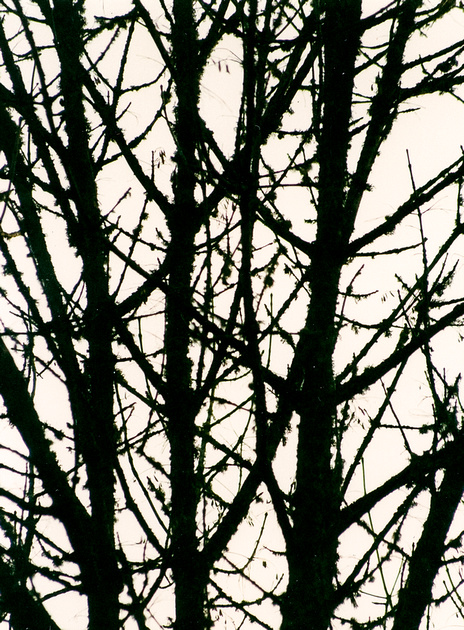 This week I'd like to wish you all a happy new year and discuss the pleasures I get from observing trees. I'd say there are a number of reasons that I like to observe trees which relate to their beauty, their structure, and their refusal to either move or acknowledge mankind's presence at all.

Trees have always struck me as beautiful.  I always resisted removing trees from a site when planning an architectural project. I frequently told my clients that "only God can make a tree" which is pretty definitive coming from an atheist. One of the reasons I find trees beautiful is their structure, which can be mimicked by structural engineers but nevertheless seems to have little to do with our orthogonal strategy of dealing with gravity. As a photographer who tends to love subjects that are larger than me, don't move, and don't talk back, trees fall into my wheelhouse.

I've been looking through my archives for photos of my son at the same ages as my grandson for a photo book I've been working on. More on that in a future essay. While on that search I came upon some images of trees that caught my interest and prompted some efforts in Lightroom to make them a little "more interesting" so as to catch your attention as well. A few came from files lost in the last decade, while the remainder were captured last year. 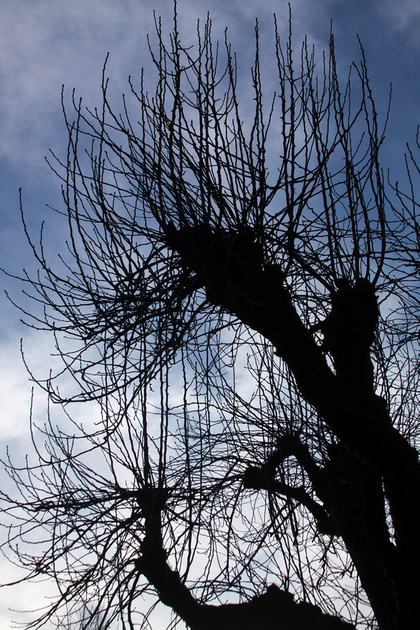 These first two images capture the beauty of two trees through the employment of silhouettes, which emphasize the intricate structure of two very different specimens against the sky. The silhouette uses an overwhelming amount of contrast to reduce the photograph to almost a line drawing or an ink block print. I reduce any detail in the tree itself that might have survived the natural back-lit conditions by lowering the black point to render the shadows as pure a black as I like. Since our eyes and brains encounter such conditions in the natural world, we can lower the blacks to near zero without causing viewers to declare the result as "unnatural." The same latitude does not apply to the lightest portions of a scene, for our brains want some level of detail to remain in an image besides the natural white of the paper where no ink at all has been applied.

The first image  comes very close to a pure silhouette, with a series of trees standing tall against a featureless sky. It even appears to be a purely black and white photo until you notice that the gray sky that day was closer to very light tan. Of course this kind of image gives you  an excuse to walk in the woods during the Winter, when there are no pesky leaves obscure the sculptural structure.

The second image was taken on the street in Southeast Portland a few days ago. There is no statute saying that you can't raise your camera to the sky and ignore your surroundings to focus on the real beauty close at hand. This silhouette also proves that a little color will not ruin the effect, as long as you resist the desire to lighten up the tree itself. 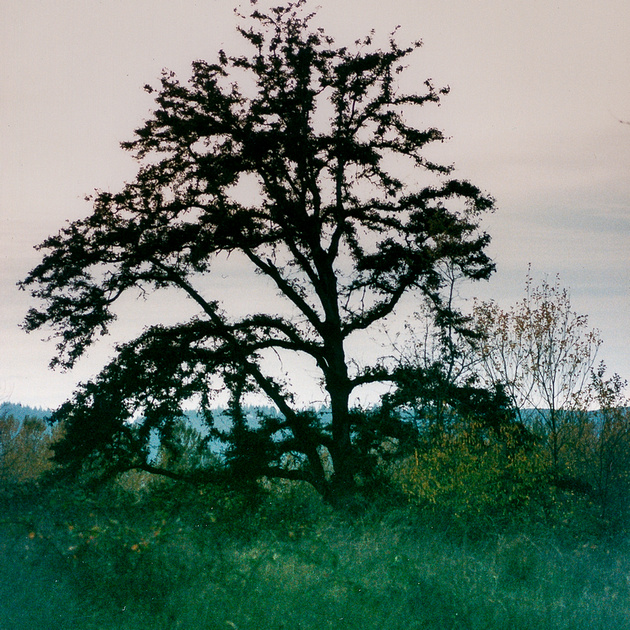 Here I encountered another lone tree with an interesting shape, but the overall conditions led to a more natural approach. The silhouette revealed an appearance more furry than leafy. As usual, I had no idea what kind of tree I was looking at - and as usual I masked my botanical ignorance with a delight in "mystery." In any case, I tried without much success to coax some detail out of the gray sky - but I did lighten the foreground enough to reveal a lot of detail and color in the prairie that surrounded our star. Photographers employ gradient filters to balance the exposure in different parts of scene. Our eyes and brains can adjust to wide differences in light levels much better than our stupid cameras. In most landscapes it becomes part of the drill to reduce light levels in the sky, and increase them in the foreground - but only to the point that our brain does not rebel at the lack of any true blacks or shadows. 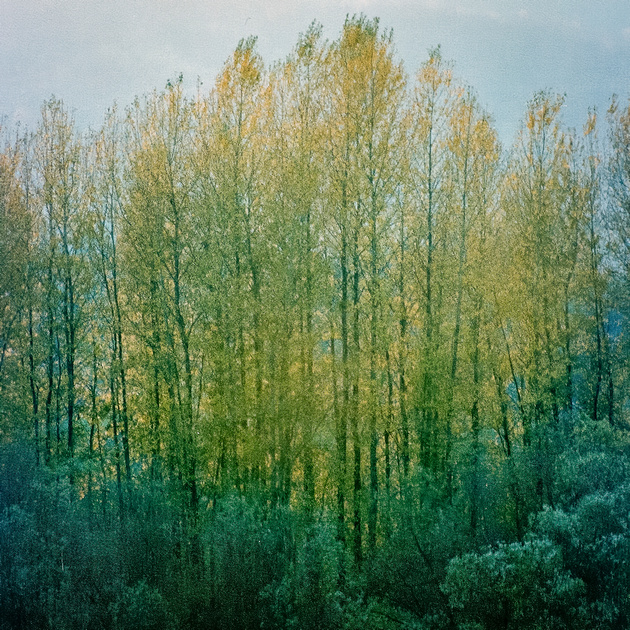 THE CLUMP  OF TREES : FINAL VERSION

But there is more to trees than just their shapes. This clump of trees near the end of summer was just beginning to assert itself against the surrounding woodland. Not too showy, but they got my attention. As usual I tried to crop to reduce the gray Oregon sky to a bare minimum to allow the subtle colors to come through. Even Oregon skies are too bright in a woodland shot, and since our eyes are always attracted to the lightest part of a scene, it's best to eliminate as much of it as possible to concentrate on your real subject. 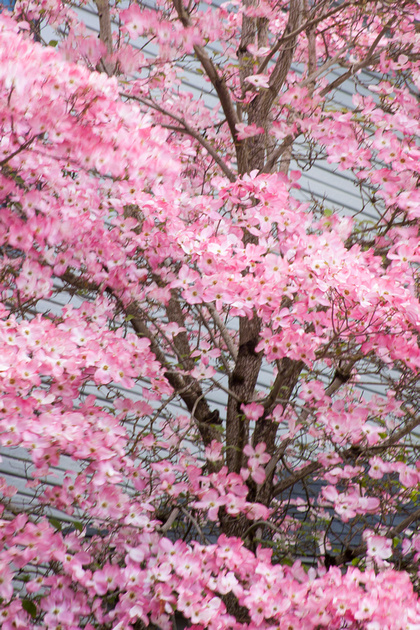 Of course in Spring and Fall our eyes are delighted by the color of the flowers of rebirth, and in a slightly morbid fashion in the flame-out of vegetation that signals imminent nakedness and death. This first image glorifies this Dogwood's plumage to the extent that I don't care about the out-of-square siding in the background and just appreciate that my neighbor painted his house a Portland Gray. I am always delighted when a scene does not need any additional saturation, thank you very much. 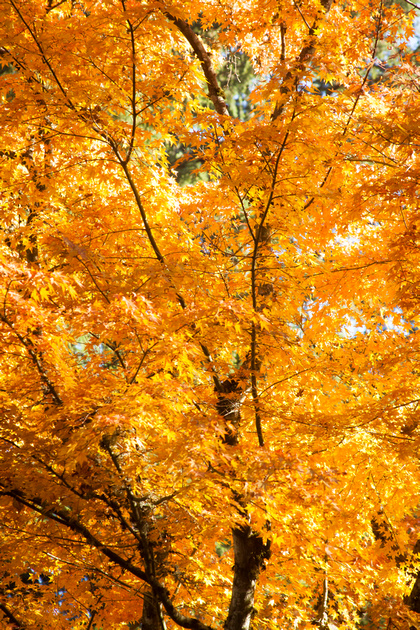 YOU SHOULD OF SEEN ME LAST WEEK! : FINAL VERSION

Then we get to Autumn, when certain trees just want to go out in a blaze of glory. Portland is not really known for it's fall foliage, since we are solidly in the land of perpetually green forests - and that once our few deciduous species finally turn on the color, the autumn wind and rain firmly shuts it off in a few days if not hours. This year we had one of our latest Falls ever, and when I caught this Maple in full glory in the Japanese Garden the maples at my house hadn't even thought of turning. Another example of the power of the micro climate, since the garden is located more than several hundred feet higher than my bungalow. Like any good National Geographic photographer who has never appeared in the actual magazine, I lowered the exposure a tiny little bit to saturate the color without using the Saturation slider.

I hope you have enjoyed this brief look at trees, and encourage you to pay more attention to their mute beauty.